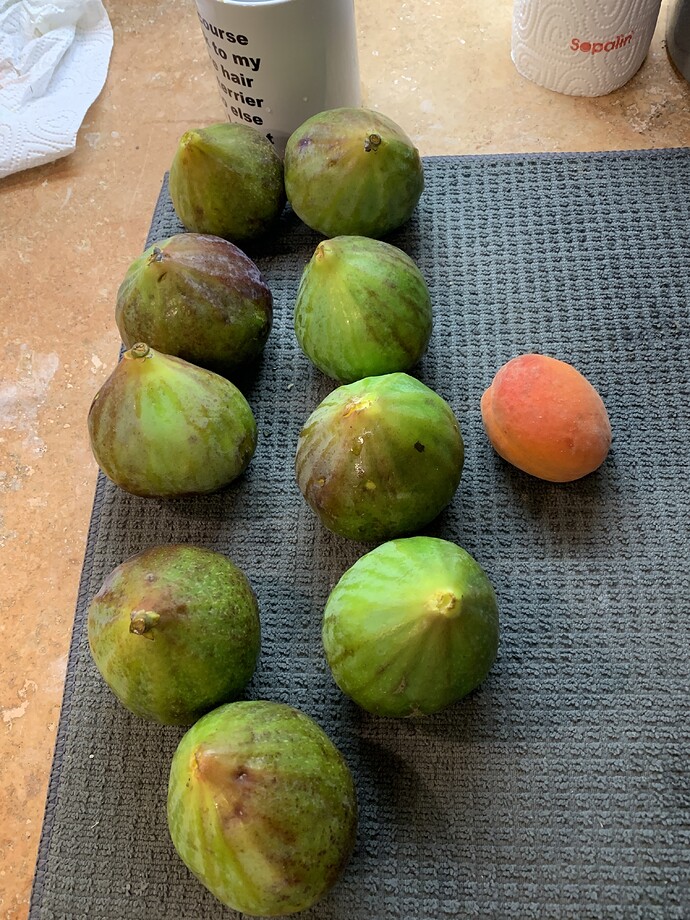 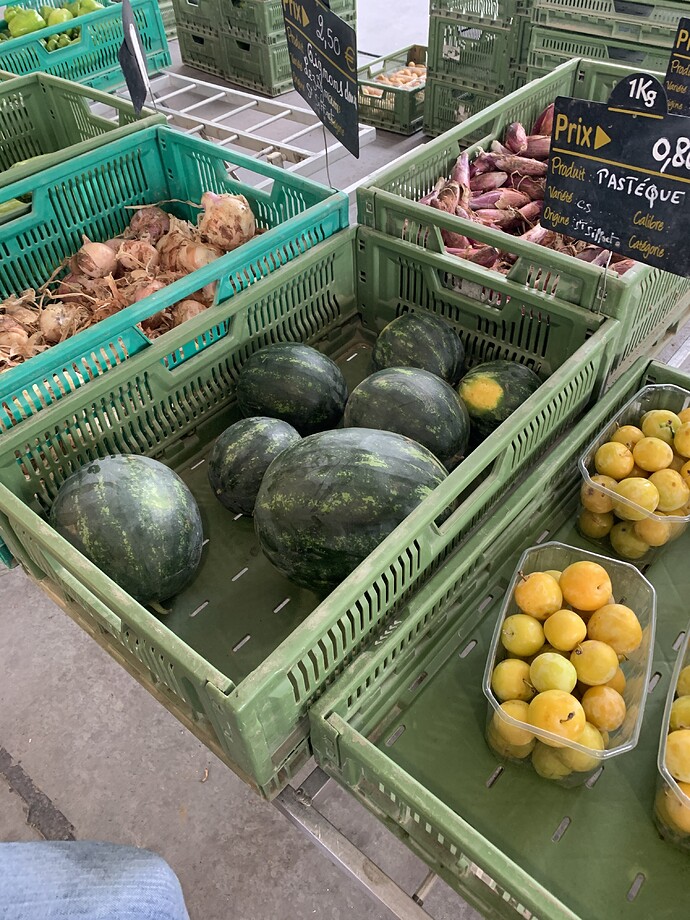 image3024×4032 2.24 MB
Took these pics at the marche in Saint Quentin La Poterie today. The figs are enormous. They are on my counter next to a very large orange-red apricot. For scale, however, look at my regular sized coffee mug behind them. They are the size of a softball. The name is Dauphin. Very sweet, very delicious.
17 Likes
mamuang July 6, 2021, 10:30pm #2

You are lucky. When I bought huge figs like that at a farmer’s market in Germany, they were tasteless

There goes the language again… The watermelon (pastèque) sign has a huge mistake in it: it’s pastèque with accent grave not accent aigu

. But I’m ready to forgive them if they give me just one of those figs

The Golden Japan Plums were brought up on another thread.Do they have a good flavor?

Not really, too un ripe!

Hello Brady and Mrs Gibson, now I am with the mobile phone, this afternoon I will send important information for both of you from my computer.

Hi guys.
I am Spanish, not French, but there are certain things that must be valued.

You are talking about a French variety of fig tree Dauphine , of which it is important to know a little about its history.

During the period of the Enlightenment, one of his most important morarchs reigned in France, who was Louis XIV, also called “The Sun King”. 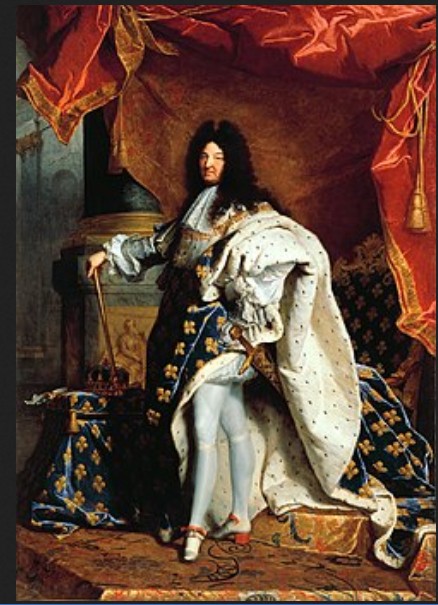 This great French monarch had the Palace of Versailles built, and of course its incredible gardens.

But of course, now comes the important fact, the gardens of Versailles had an immense space dedicated to fruit and vegetable gardens that supplied the palace, and who did King Louis XIV as gardener appoint in charge of the fruit garden of Versailles?
Well, neither more nor less than one of the most important botanists of all time “Jean-Baptiste de La Quintinie”. 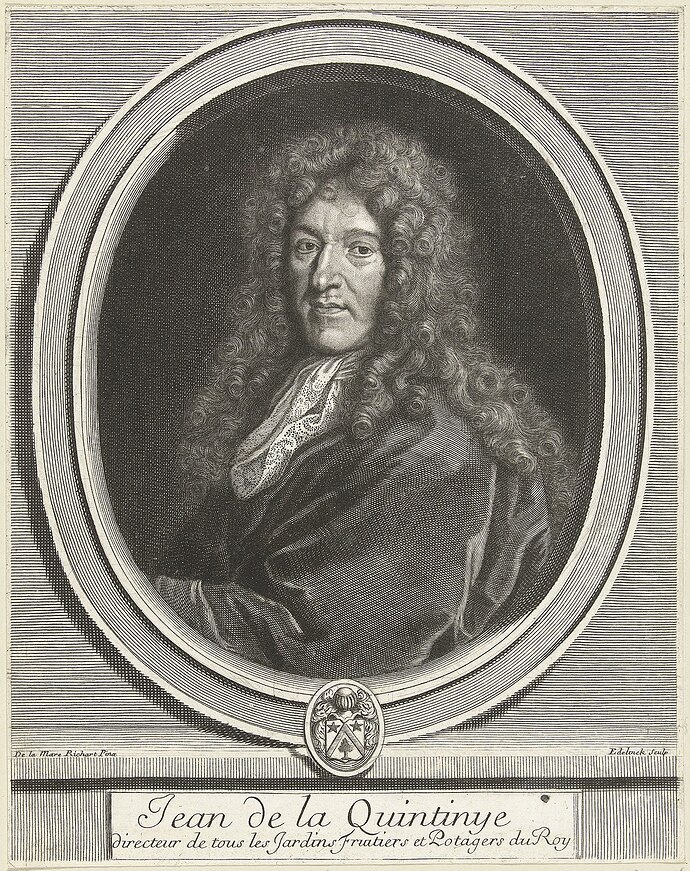 That in the year 1695 he was already writing treatises on ortho-fruit growing. 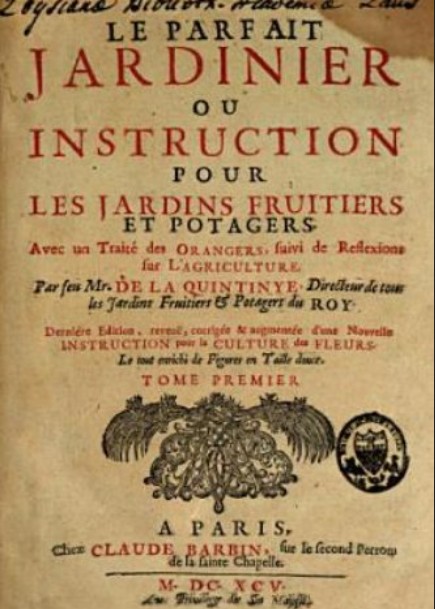 Well now comes the interesting thing.
Louis XIV was known for his gluttony, he was very fond of fruit and especially figs, and in his taste for figs he had a favorite variety, which was the Dauphine variety, which he asked the royal gardener Jean-Baptiste de La Quintinie to include in the garden of the palace of Versailles.

It is interesting to know a little about the history.

Having said all this, this is the Dauphine variety in its current state in my orchard (it has been an abnormally little hot month in June, and it still has quite a few days to mature), these brevas can reach a weight of 200-225 grams and are of excellent quality. 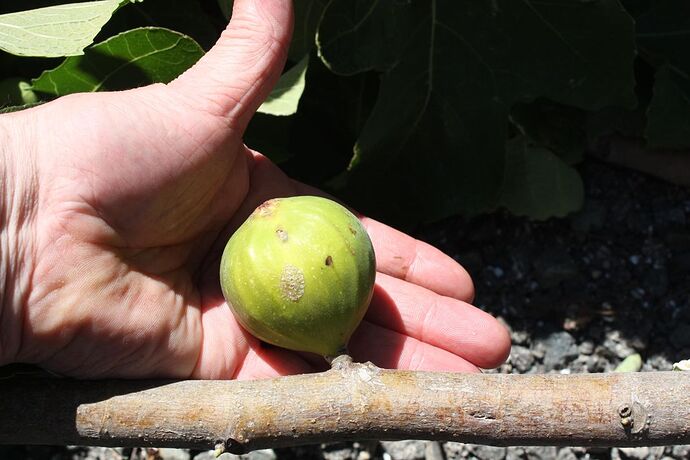 But the King Louis XIV was in France, and not in my province of Spain (Albacete), otherwise I would have known this variety of fig tree native to my region (this variety does produce real giant figs) 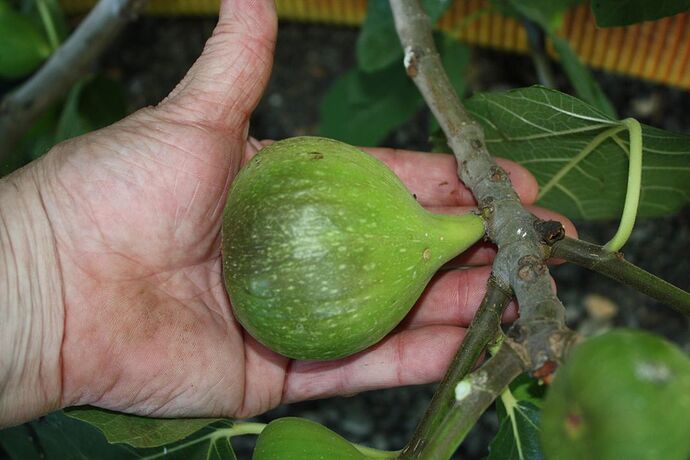 In this variety, the brevas can reach huge weights of up to 350 grams, and it is really delicious.

Now we will talk about the Golden Japan plum

Bradybb, I’m going to forward the information I sent to Drew a few days ago by private message.

Look this is the Golden Japan variety 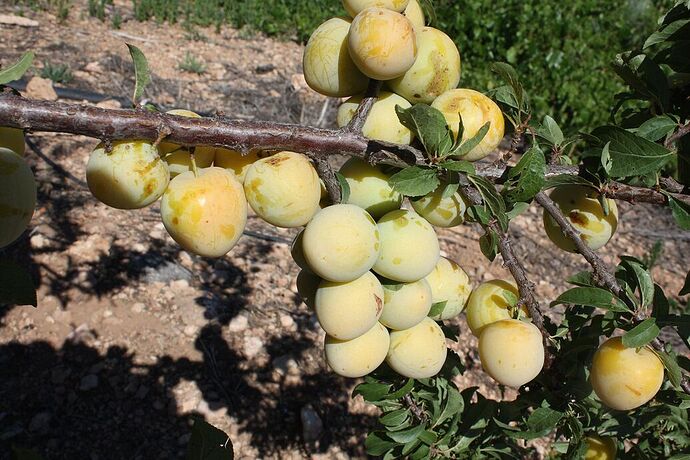 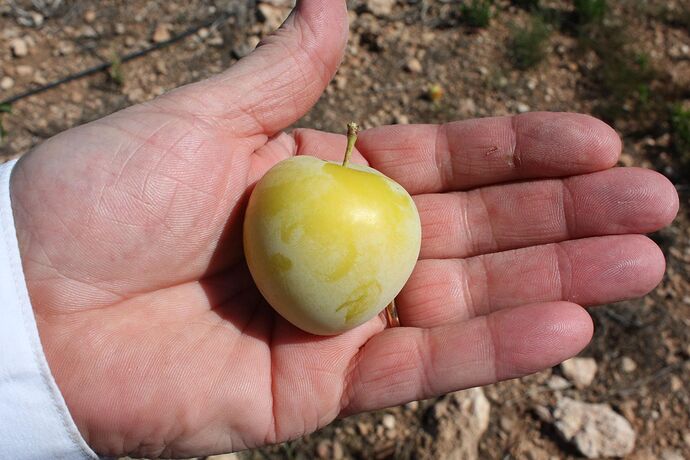 I had two adult plum trees of this variety, and I pulled them out of the ground in my orchard, but not before having strategically grafted it onto four branches of other good quality Japanese plum varieties, in the four corners of my orchard (which has a dimension of about two and a half hectares).

The quality of this variety is tremendously mediocre, and it has a bad habit that every year tends to overload fruit, even when there are spring frosts, all varieties lose the harvest, except this variety (it is worse than a bad mother-in law hahahaha).
So as a variety to have in the orchard, as a fructifier variety due to its flavorful qualities, I would not recommend it “NEVER”.
However, it has a quality that “NO OTHER” variety has, and that is its tremendous pollinating power.
As much as I tell you, I fall short, this variety makes even the legs of the bed bear fruit hahahahahaha.

That is its great advantage over the rest of varieties with very early to medium flowering dates, since the flowering period of Golden Japan lasts a very long period of time.

That is its only utility, but you guarantee the pollination of all your pluots and plums of the Japanese type.

Your Japanese Golden plum remind me of Shiro, not just the look but also other qualities. Shiro is cold hardy, super productive and a good pollination partner.

“So as a variety to have in the orchard, as a fructifier variety due to its flavorful qualities, I would not recommend it “NEVER”.”

O boy, do I second this or what. They pull off a great look, and never fail to disappoint when you pop one in the mouth.

Shiro’s are positively delicious compared to these.

Thank you Jose! I have been a Francophile before wrinkles have have studied French gardening for the past 8 years. I have been to the gardens and orchards of Versailles as well. ‘Les Dauphin’ figs are new to me this year as they are enormous. We know the history of France, just not a lot of history about the fig. You have helped. I served them last night with Gorgonzola cheese while watching England beat Denmark in Football! Today I walked outside and watched the Tour de France! Between sports and fruit, France is great!