It’s much better if i don’t let a callery go to long but occasionally I do. There is a big difference between a 2 and 3 year old callery. This one was more like 4 years old i think because it was in an older orchard it got overlooked twice. Clearly the grafts failed and it should have been t- bud grafted. Planting large amounts of rootstocks then grafting them in 1 or 2 years is a great strategy at my orchard. Allowing the roots to get established gives the tree more resistantance to drought and other problems. This is a marginal area for fruit so my orchard methods are slightly different than they might use in Oregon, New York or Washington. Many sites can plant bench grafts with a high degree of success. 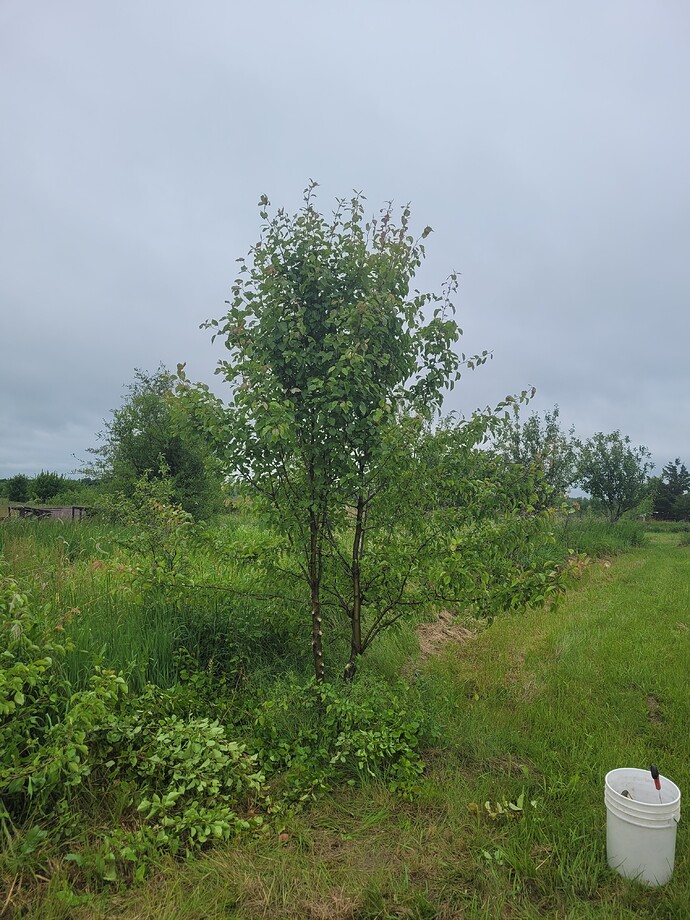 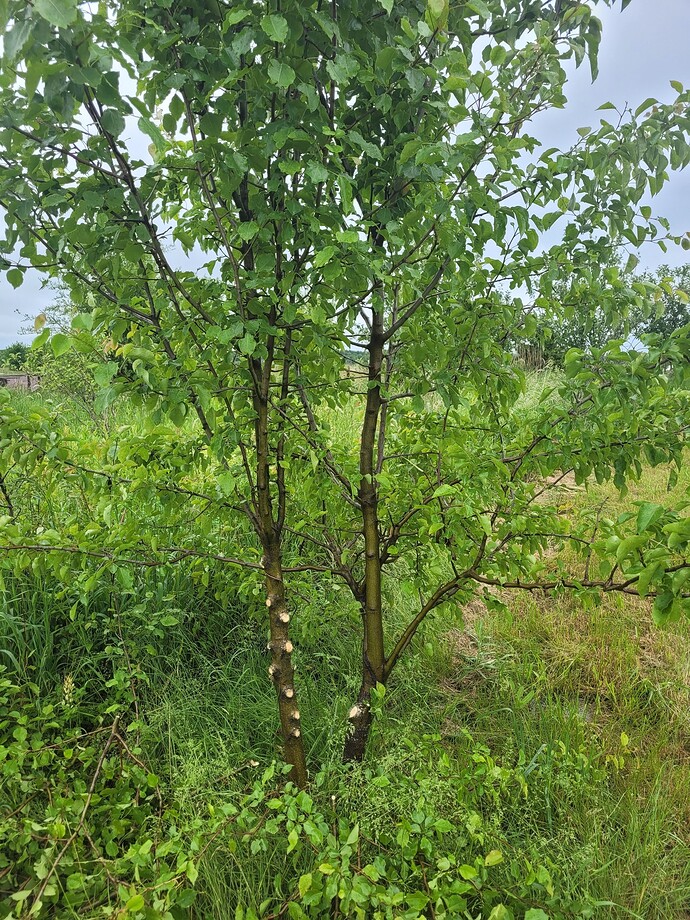 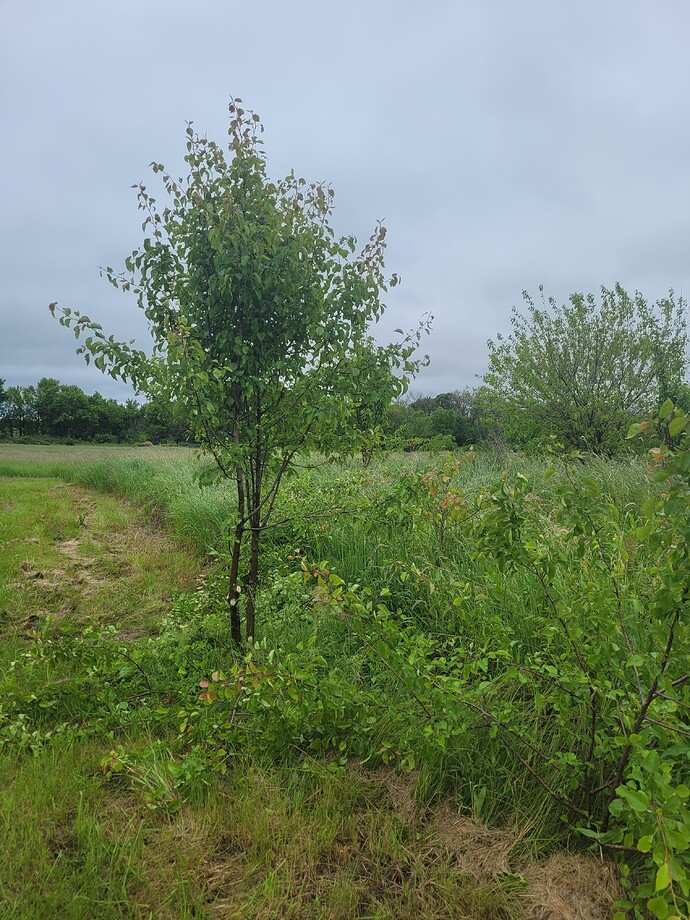 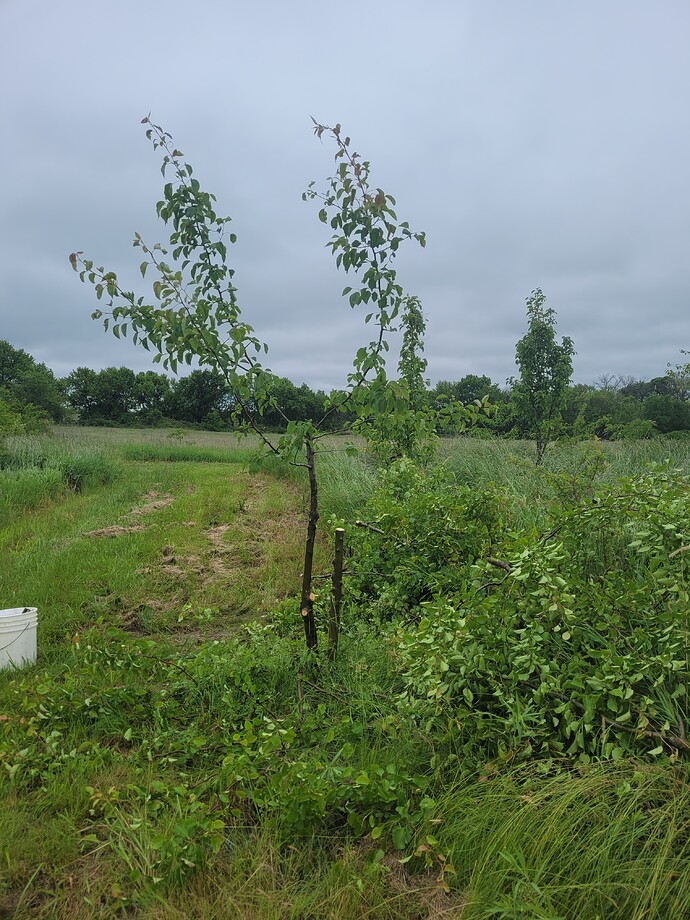 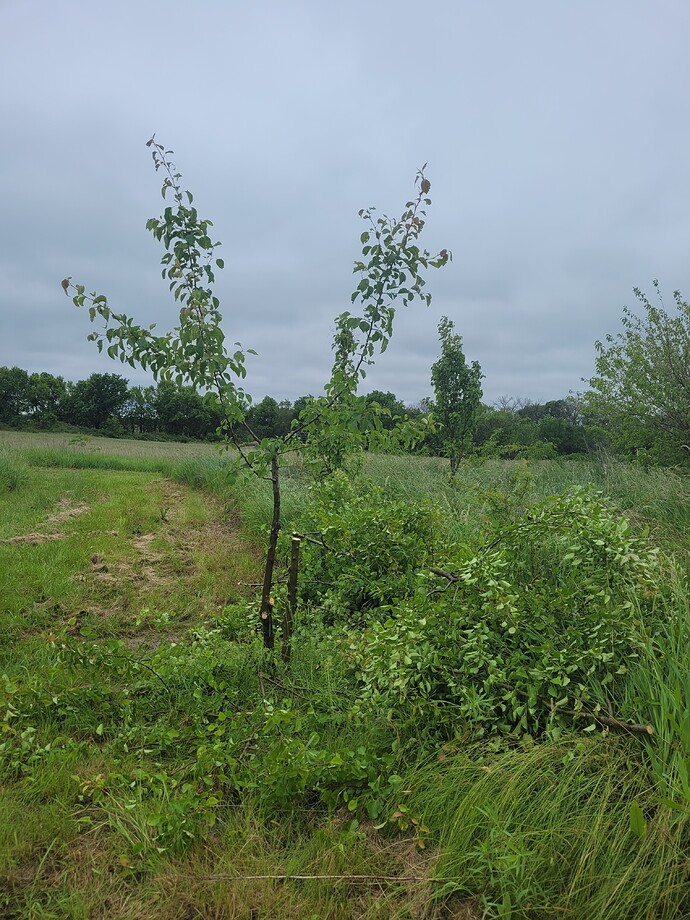 20220525_1748463024×4032 3.31 MB
They are much more work to prune up and graft but they do produce fruit very quickly. Grafted this one over to Harrow delight. Any pear that shows its had a failed graft I try to graft over with easier to graft scion wood. This pear is a wild difficult to graft pear. 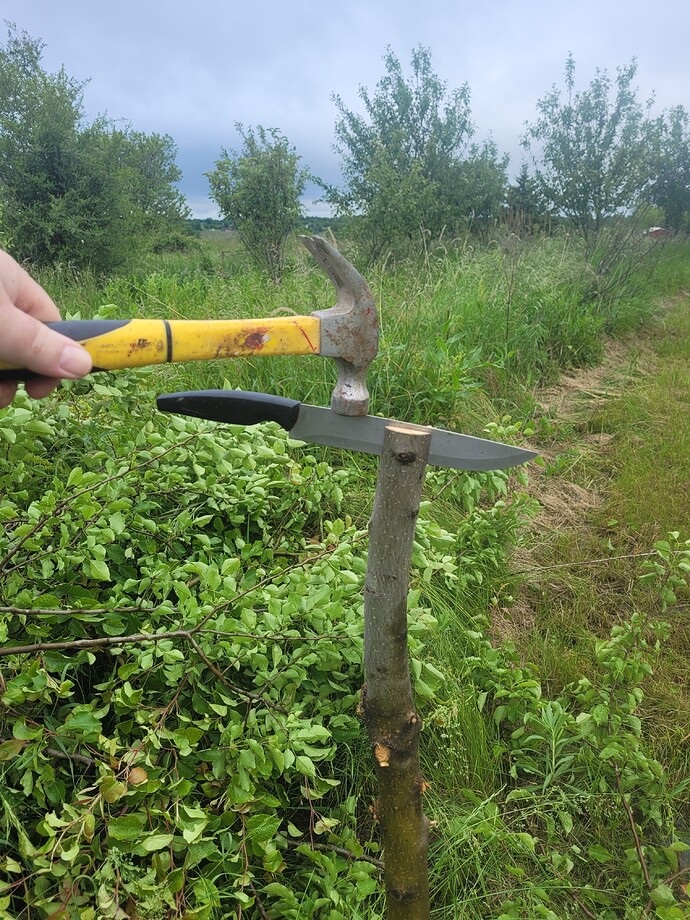 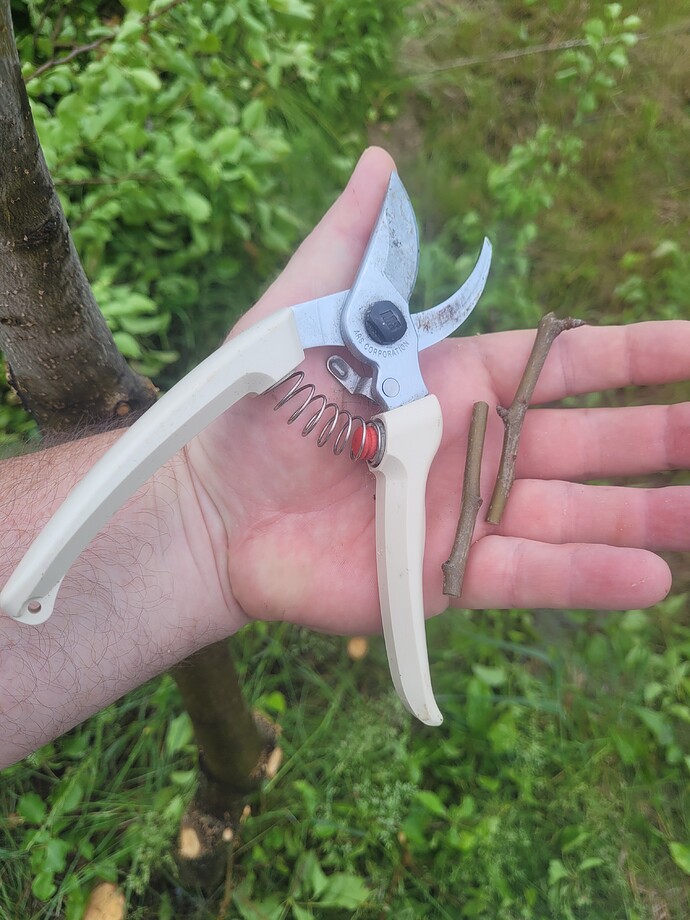 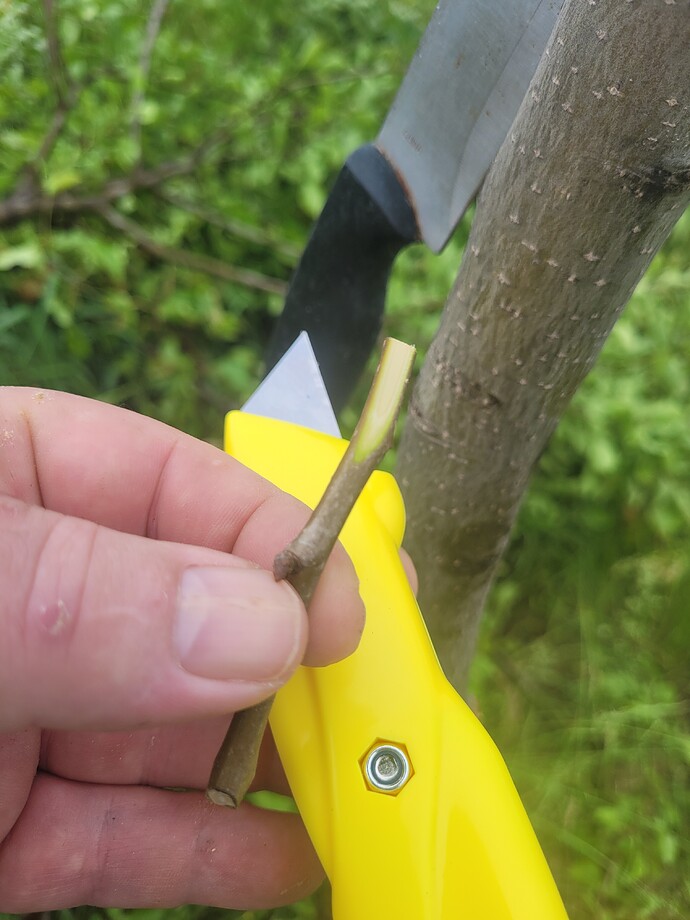 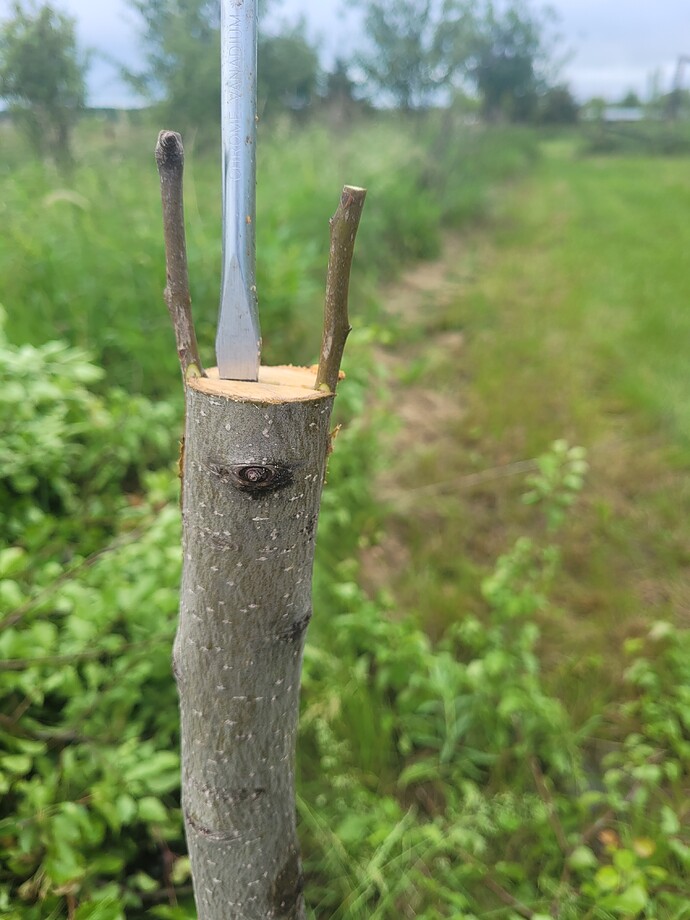 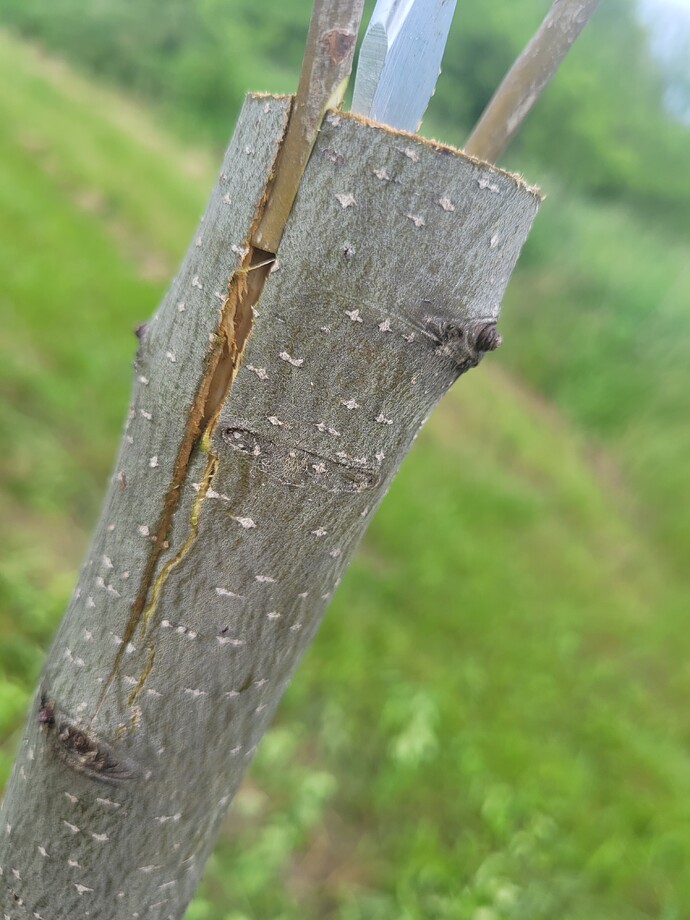 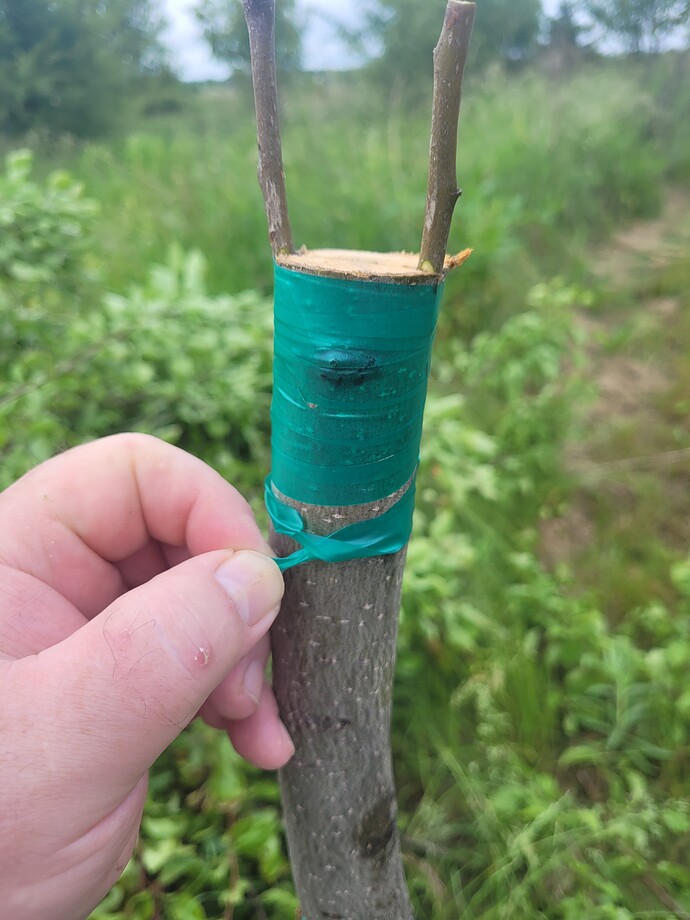 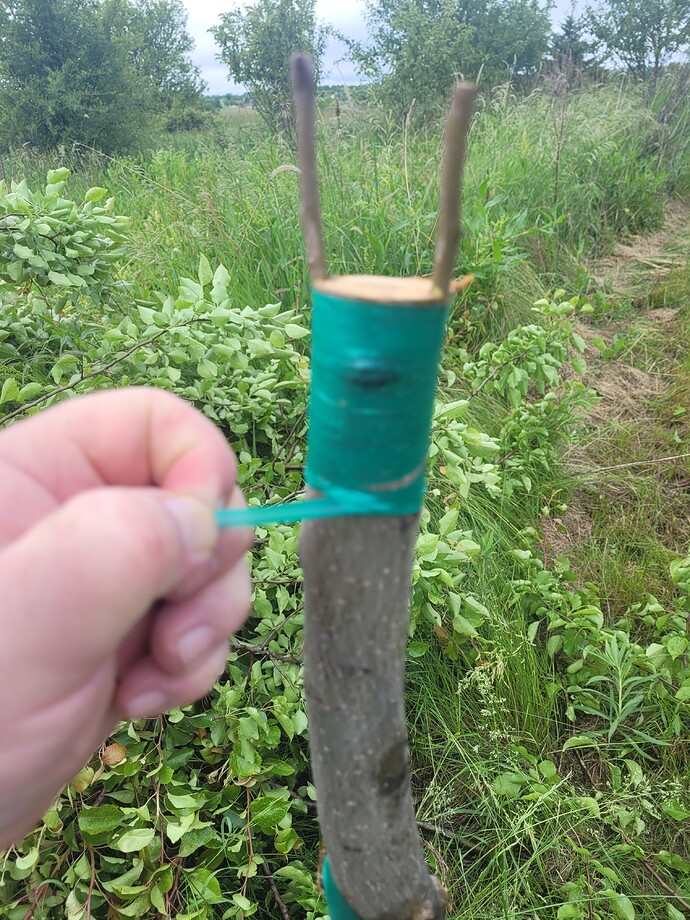 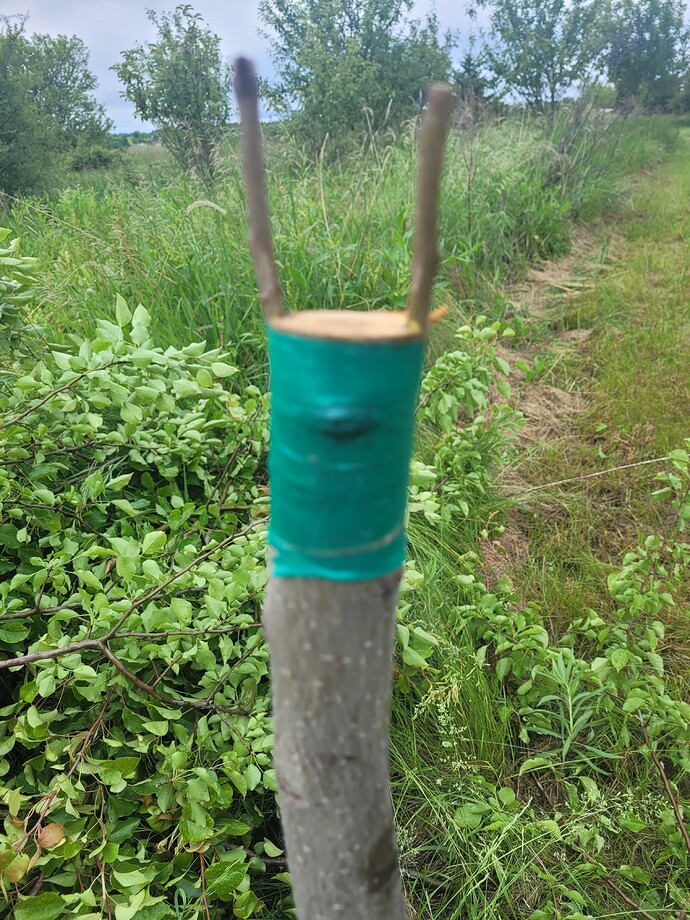 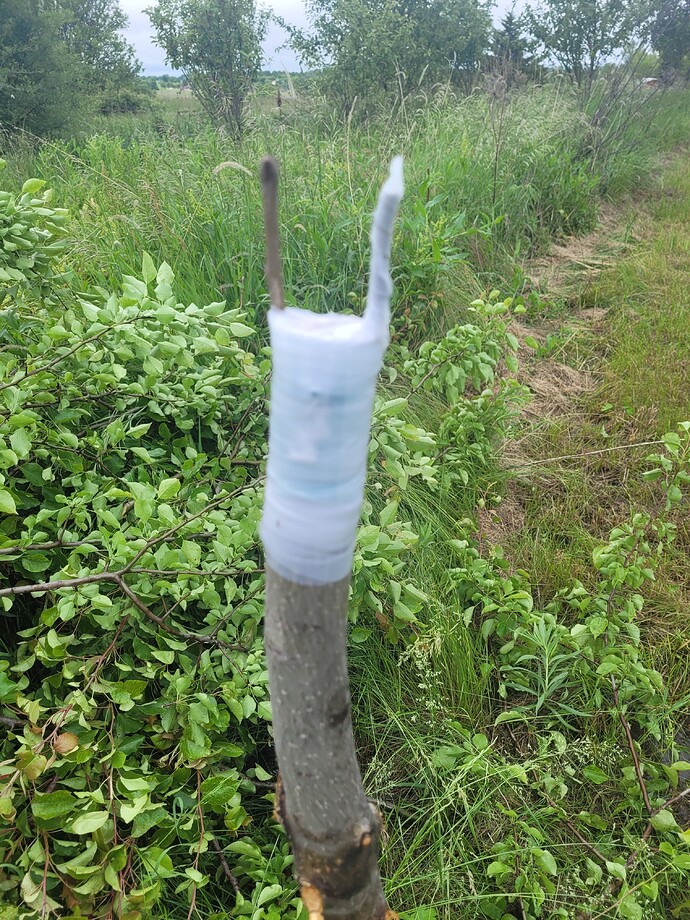 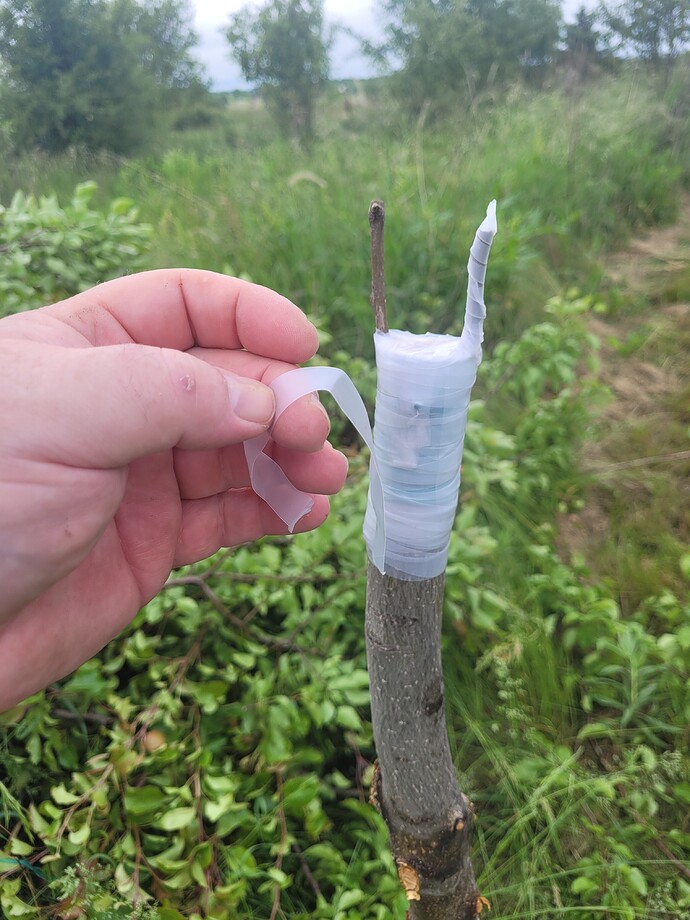 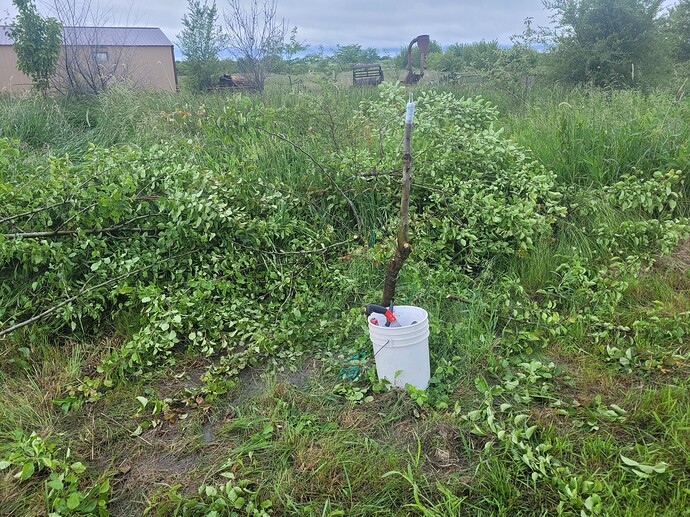 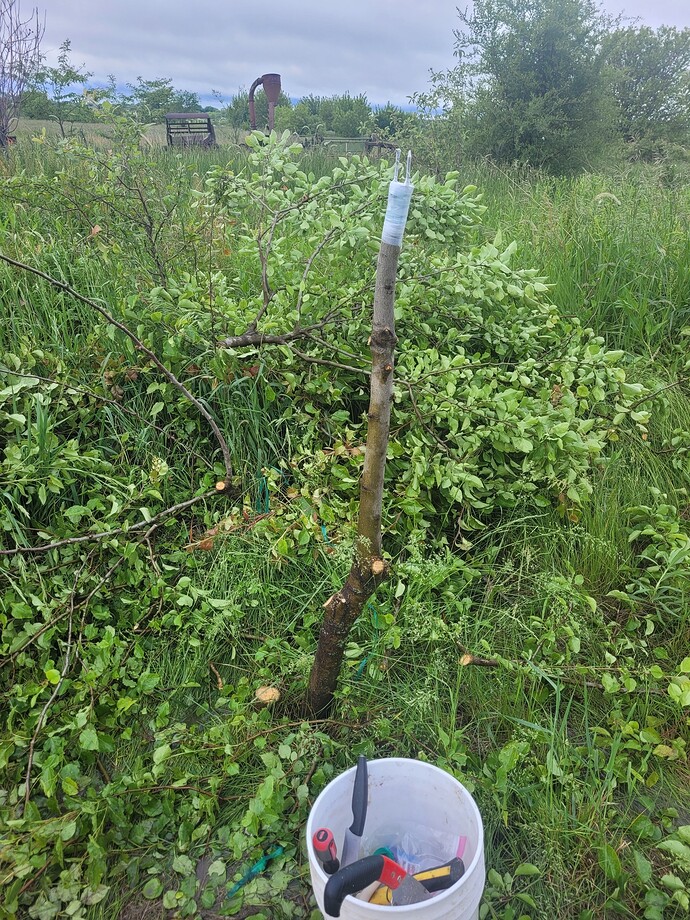 I grafted 12 scions to one using a step ladder. No problems.

Nothing wrong with that but I’ve found in my case it’s easier just to graft over the entire tree like this.

In a couple of weeks they normally look like this. This is another I grafted over 2 weeks ago. If one side doesn’t fail of the cleft I will cut it off eventually. 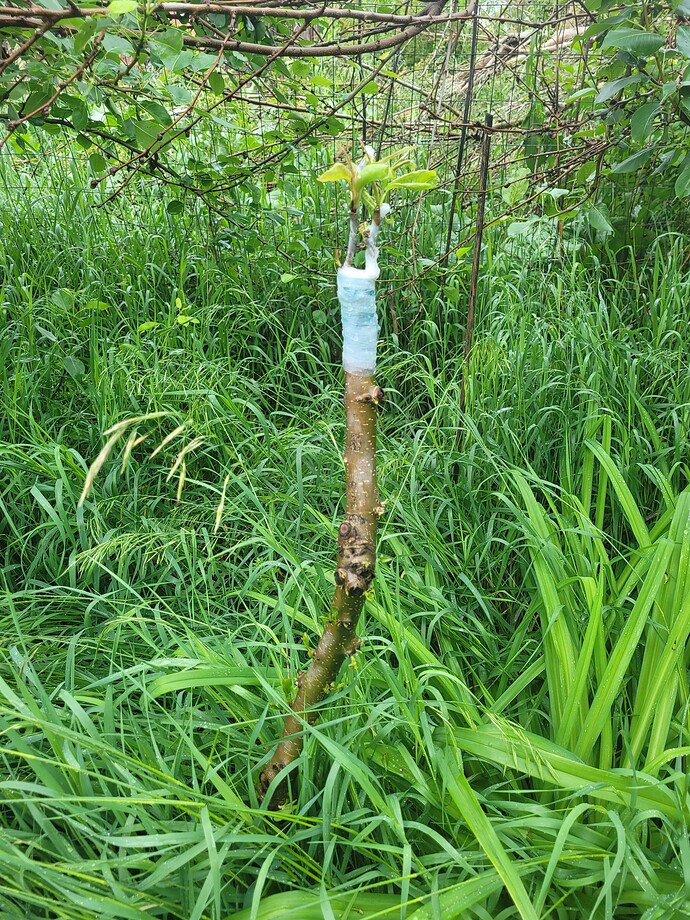 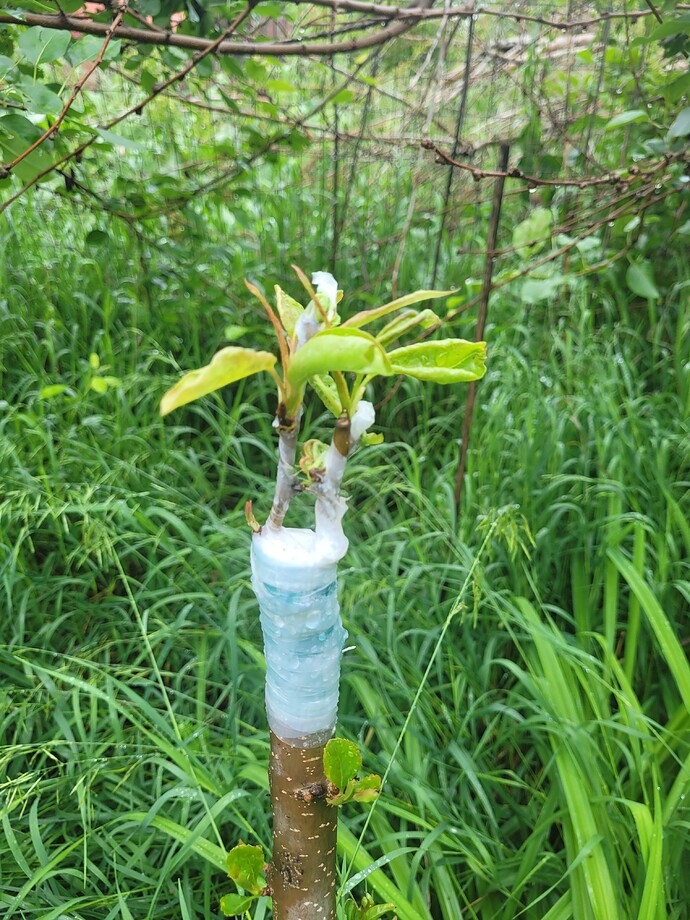 I’m curious why you use a cleft graft instead of a bark graft for those. Wouldn’t 3 or 4 bark grafts around the outside heal a bit faster and give more places to start the callous closing around the outside of the cut? There is a 4" caliper callery by my community garden plot in a bit of a brushy area, so I was planning to graft it over when nobody was around… I was planning on bark grafts, but maybe I should cleft?

I too would have done a bark graft on the principle that splitting the stock on a pear tree is an invitation to long term decay. With a properly nailed or stapled bark graft and a tied on support stick, growth and performance is outstanding.

Cleft heal in half the time normally of a bark graft and the union is typically stronger. If the callery was 6" a bark graft is the better choice. If the trunk can be easily split with a butcher knife the cleft pinches the scion holding the graft together and makes a great union. For those in Europe and other parts of the world they are referring to a rind graft aka bark graft. A cleft will likely close in the first year or two. There are rinds I’ve done on large trees that were still closing 5 or 6 years later. Will take some photos for you of clefts as they heal the difference can be shocking. Here is an older thread where I ask Mark about the problem I’m bringing up Cherry budding issue
Here is a cleft graft of mine healing and its ugly but closed quickly. 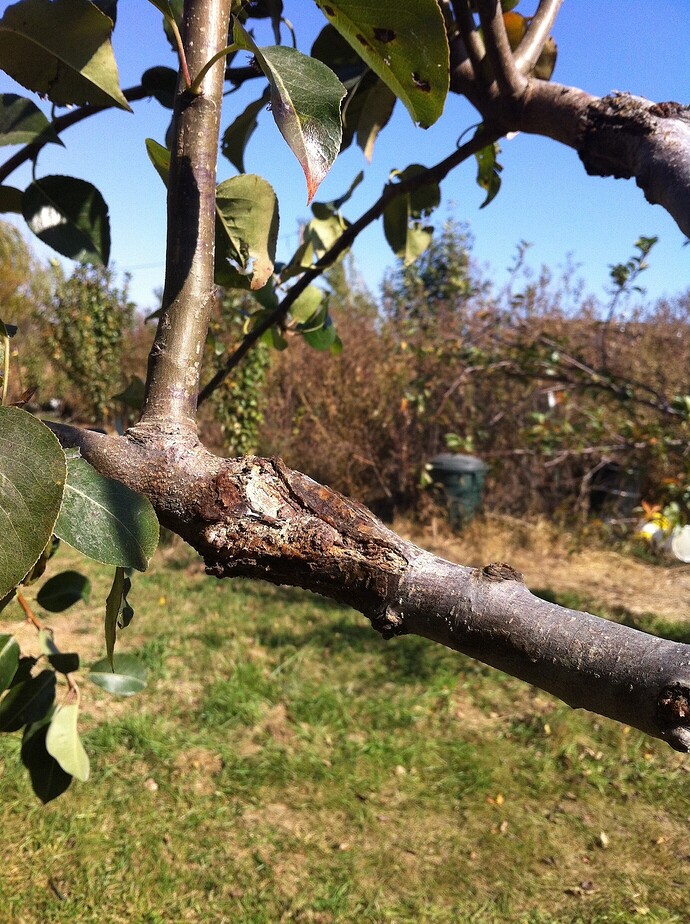 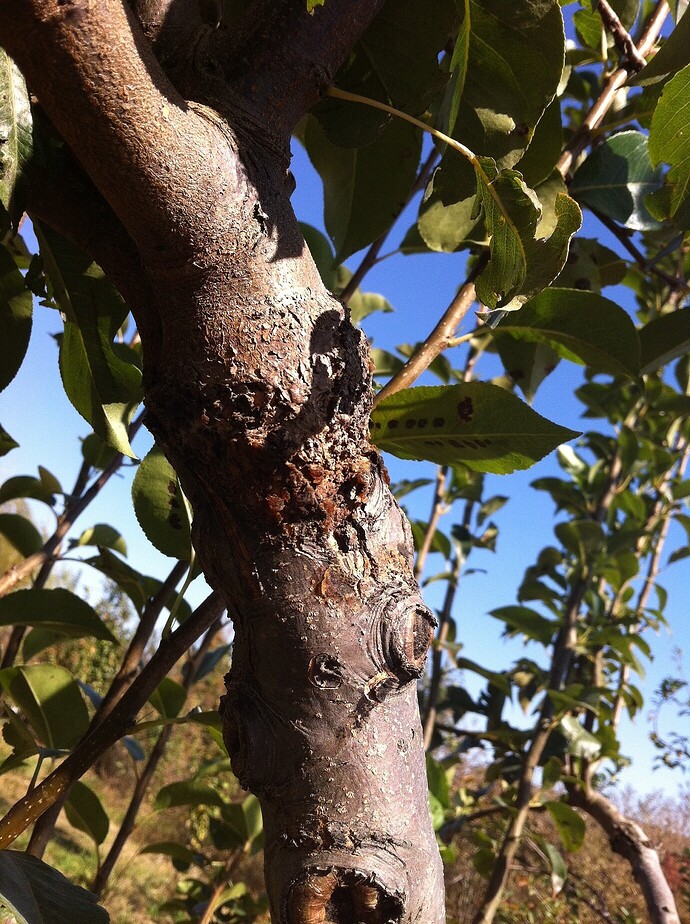 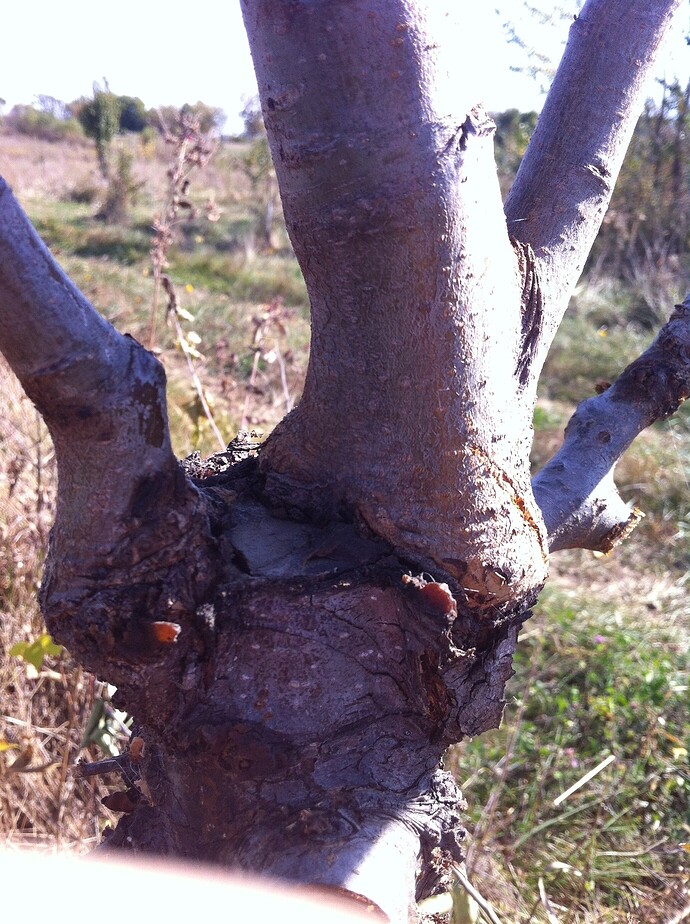 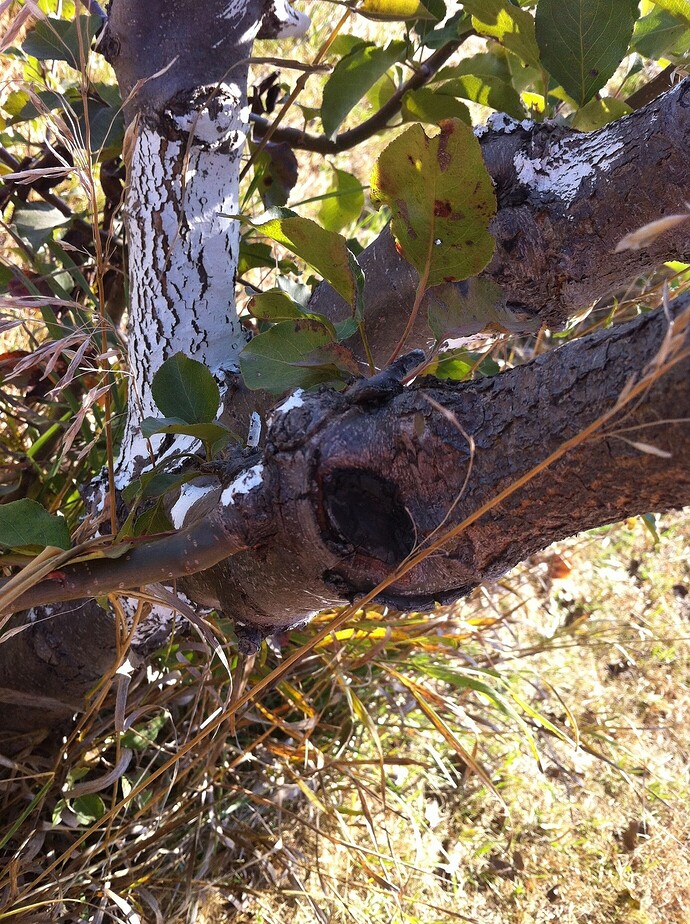 Okay, I guess I’ll try clefts, since that will be quick and easy. I guess when I think about the branches I’ve grafted on pears with clefts they have closed quite quickly.

I found 16 month old bark/rind grafts supported a dozen or more fruits to maturity and no damage to the tree, limb or graft…that’s a dozen fruits per limb, not per the topworked tree.
So, ugly perhaps, but strong enough.

I did one cleft this time I think, but mostly whip and tongue on smaller limbs…and bark graft if larger than one or two inch trunk/limb diameter.

Yes but I’ve had the rind graft break off just as many times as support fruit on a two year old graft. Some heal better than others but think about the style of the graft. A rind literally becomes a blob on top but a cleft is like a clothes pin strong enough to hang blue jeans on the line for a reason! It’s true I have many rind grafts so I don’t think it’s a bad graft just not my first choice. Try a Duchess d’ Angoulme or pound graft where pears are 1 pound+ each. To make matters worse Duchess has very soft wood. It’s a tree with a recipe for disaster but I love it for the late big harvests. The gentleman I collected scions from had branch breaks every year. My experience is similar it’s a reliable producer and branch breaks are part of it. If you thin the fruit they just grow bigger.

I confess my first time I was concerned…and even thinned some egg-sized fruits…but still left a dozen. So far, all’s good.

The same tree this year (has about 8 varieties) all bloomed too early except Bartlett and one other…One Bartlett limb, maybe size of mature cucumber, has probably 20 fruitlets this time…at 26 months since grafting. I’ll see how bad it sags before deciding to thin, since the tree itself has a light crop.

When the limb is that big you have few worries left now but I would be a little cautious until it’s fully healed. It is a little weaker graft but once it has grown to the full size of the tree its ok. The cambium will soon be fuzed together between the trunk and scion and then it’s as strong as any graft. Kansas wind perfects your grafting techniques quickly! Nothing like 50 pounds of fruit swaying in the wind to teach you the best method!

I do more whip & tongue, even on my ‘frankentrees’, than other types grafts, but it’s good to have
a variety of options depending on scion sizes and limb sizes and accessibility.
Certainly a rind graft in top of a tree is subject to being torn lose by a bird perching on it or something in the early going.

Yes and your right rind graft have their place any really large diameter tree its the way to go.

Whip & tongue is inherently limited to stock in the 3/16 to 3/4 inch range. I’ve had outstanding results with whip grafts on pear and finally figured out how to get them to take on pecan. A huge advantage of a well made whip graft is that the wound seals entirely usually in the first year of growth.

I’ve used cleft grafts for pecans and pears many times over the years with good results. They were on stock from 1 inch up to 2.5 inches diameter. Wounds healed rapidly and sealed very well.

Bark grafts can be done on any stock from 1 inch up to 8 inches. They are fast, easy to make, and very reliable, especially for pear and apple. Pictures I see posted here often do not include a support stake to hold the new growth vertical. IMO, a bark graft should always include a support stake for at least the first 2 years. A large rootstock will often push 5 or more feet of new growth the first year. That growth is susceptible to being leaned over by wind which really messes up the tree form.

I’ll see if I can get some pictures of the grafts I made over the last 2 years to show results. I have a range of whip, cleft, and bark grafts which should demonstrate stock sizes where each works best.

Still grafting more over. This is a two year old. Perfect size for grafting. Took a picture just as I’m ready to fit the tongue in and tighten it down. I’m not as picky as some since these are pears and I have hundreds to do. 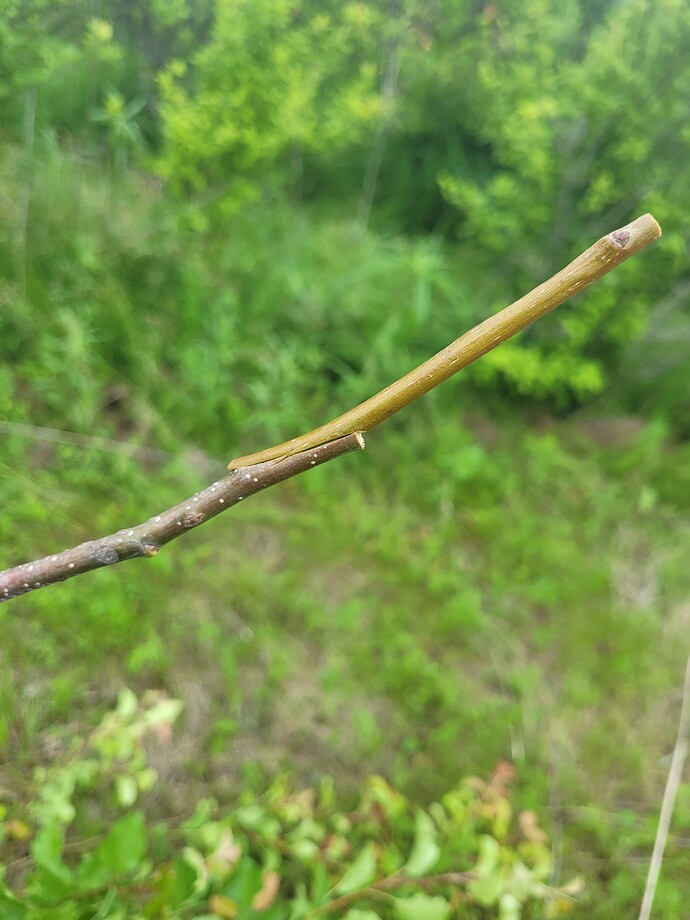 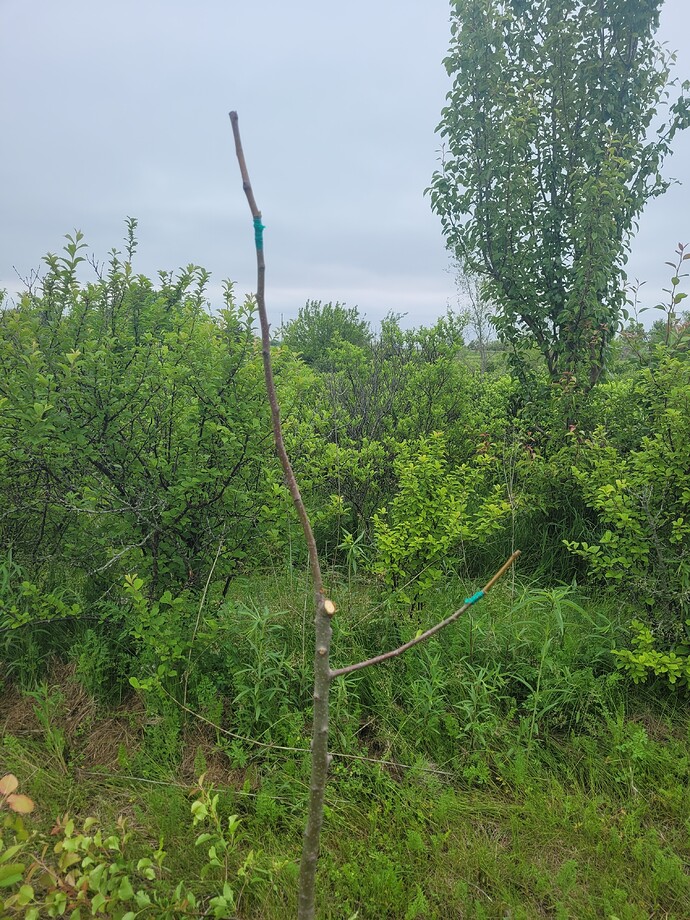 Clark like you, i prefer the cleft grafts. they arent the prettiest but work well. ive had very good luck with them over any other. i shake alot and am afraid to do the more exacting grafting techniques.

Wild callery are everywhere free for grafting. This type of lot full of callery is something I see frequently. See the red colored leaves? 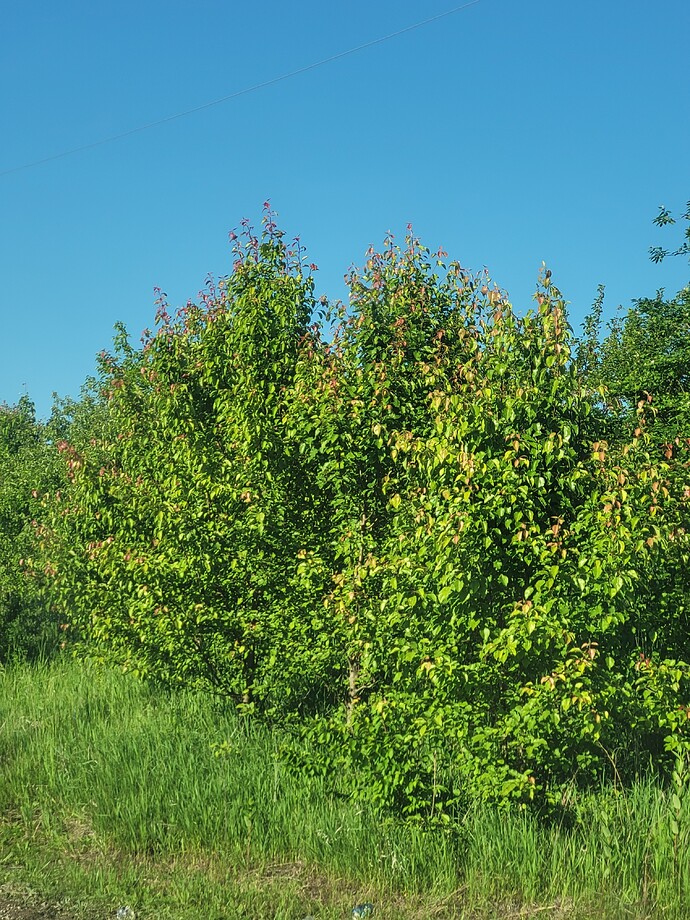 Neglected property like this is a common place to find them. 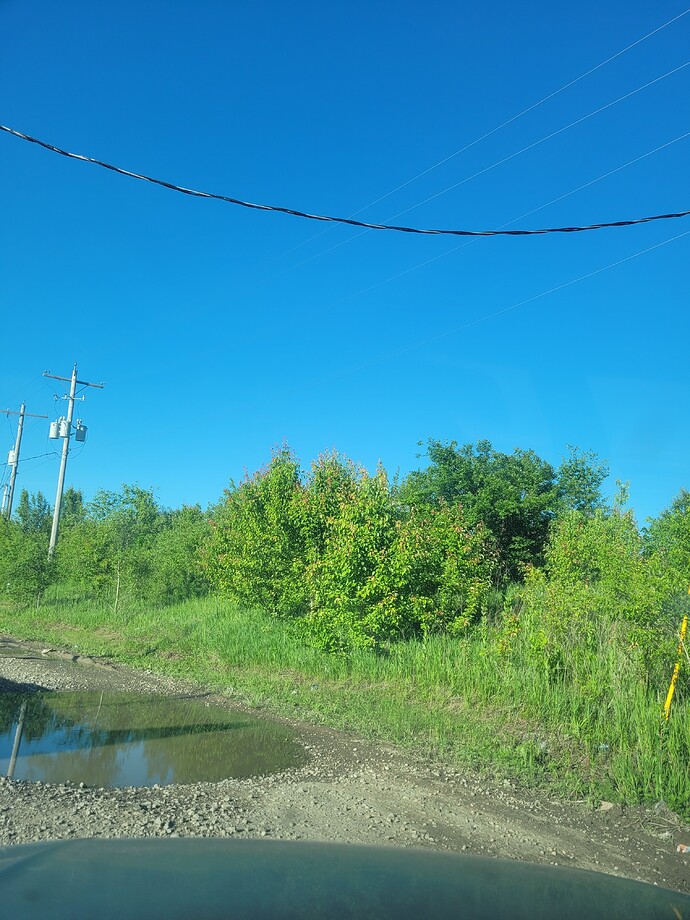 These callery are over 30 feet tall now but in this photo they were only a few years old. The foliage can be very brightly colored. In the fall red or orange leaves make callery very easy to find. My callery are all red leaf varities. In the spring or summer the foliage of wild callery is more green like the previous post. 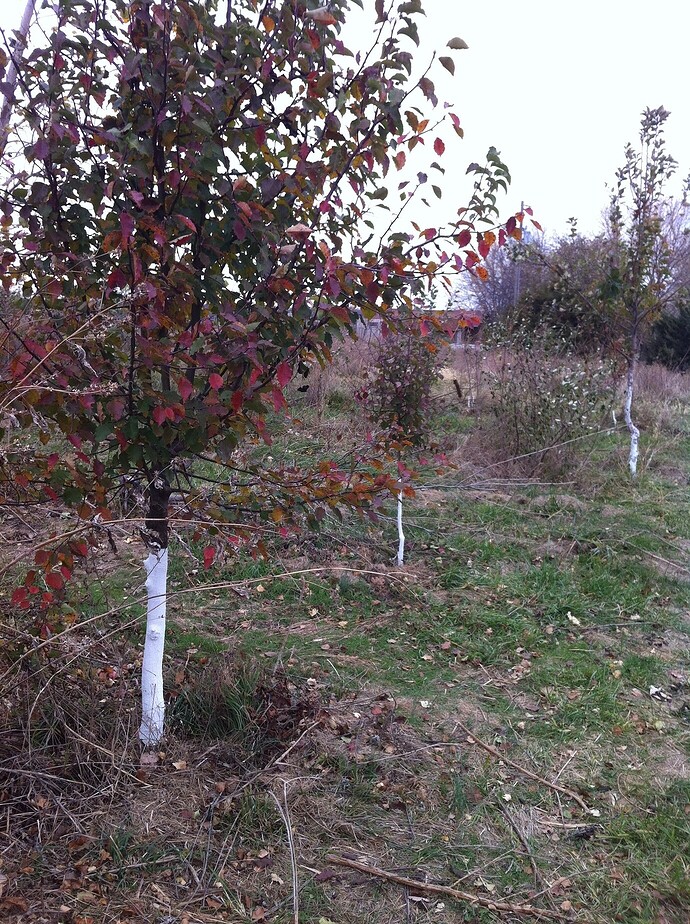 Most of us know callery pear can be problematic is certain areas for the same reasons I like them. They grow where other trees will not, they can survive both drought and heavy rains. Digging up the wild rootstocks is a bit of a pain but if your like me and have an area you have problems growing pears and they are not invasive in your state you might try them. These a friend and I dug up the other day are going into wet heavy clay that a domestic pear will not grow in. Fortunately I had my frien…

why is it you have a cut off stub remaining on your whip and tongue graft, even though the two seem to be the same size?
(It is necessary if the two are quite a bit different in size, I understand that.)