These are photos of chestnut grafts I did on the top of a vigorous seedling in 2015. On the main trunk are three sticks of the variety Gillet (the graft union is at 17.5 feet above the ground) and slightly to the right and below on a lateral branch is a graft of Szego. I wasn’t sure how it would work to graft this high but it is working out well so far. The Gillet grafts produced nuts this last season. 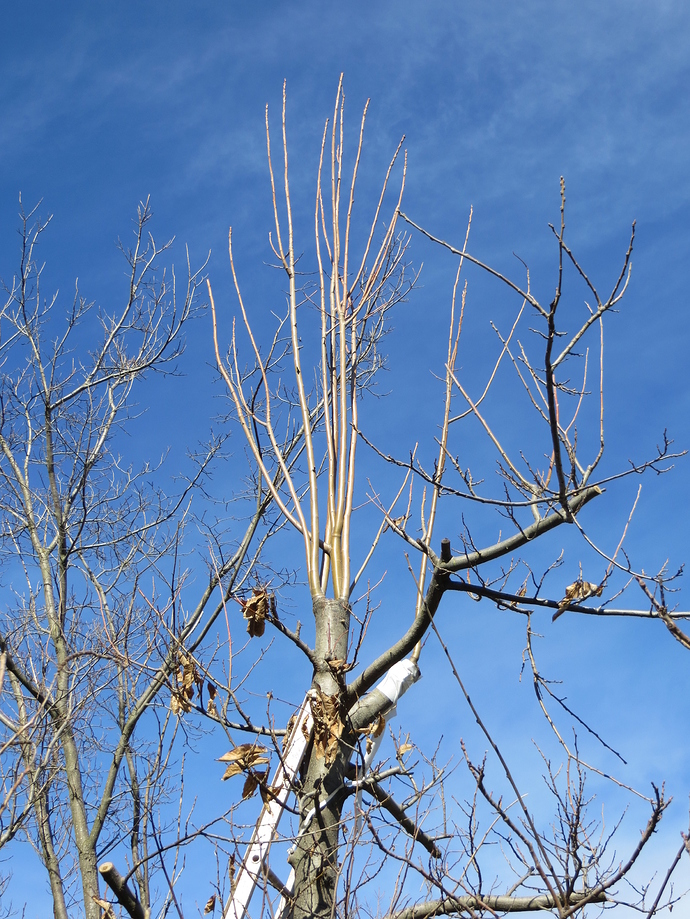 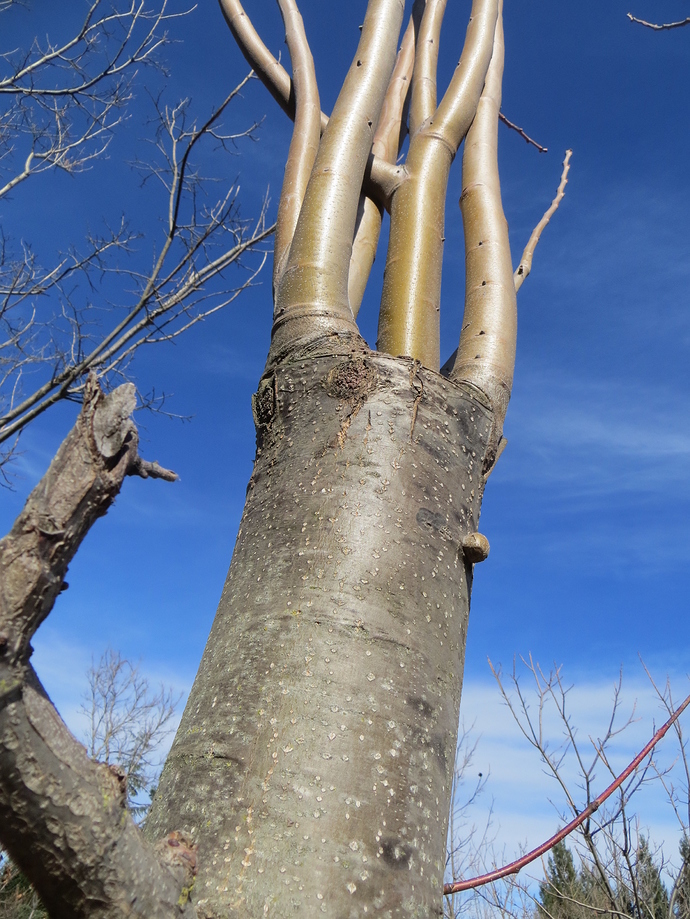 How late can you wait to graft, Castanea? here, I tried twice when new growth was just starting, and both times had enough frost to burn the new growth and kill the grafts. I would have about a foot of new growth if I waited till our usual last frost time. What would you suggest?

I’ve successfully grafted chestnut trees in every month. I am in zone 9 but even elsewhere you should be able to graft from April through August. Unlike many other species of trees, once they start growing in the Spring, chestnut trees tend to keep growing until they harden off in the Fall.

Thanks, I’ll try it later then. I might do a few in current year’s growth, and a few in older wood. What do you recommend?

I have a male barren tree I’d love to get nuts from, grin.

Did you use 3 scions for each large branch.

What type of chestnut tree is it? How old is it?

For the trunk I used 3 scions. For the highest lateral branch I used 1 scion.

It’s an american chestnut from a very inbred stand. it’s 11 years old and has bloomed twice, having popped out 3 anthers last year, total, grin. I did make one nut from it with a hand pollination, so the pollen is viable, just very few anthers. The female flowers are fine, and I hand pollinated and there were nuts in most burs that I could reach.

I’m currently waiting for some of my grafts to bloom, that is, if the mice haven’t eaten them. I grafted quite low and the mice ate two last summer, tunneled under the cages and ate the whole darn thing. That’s why I was so interested in your high grafts, a way to be above the mice…

I’m not sure you need any advice from me. Sounds like you’re doing good.

You are kind :). I’ll try grafting much later, and I’ll let you know how it works out. I do have some grafts in the house, but as they are low on potted stock, mice can still eat them when I put them out later. Some years the little nibblers are really bad.

I don’t have many problems with mice, but I did have this odd problem with a bur. I don’t know what was chomping on it. 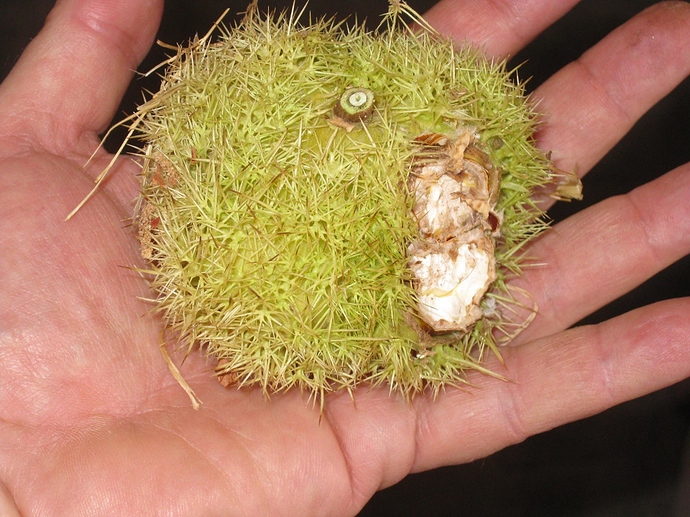 I don’t know either. Since you might have picked it off the ground, did a deer step on it, or some similar animal?

No deer around here. I had quite a few of these a few years ago. It was done while still on the tree. Then it just stopped happening. I have no idea what kind of critter could do this. Maybe whatever was doing it was killed by coyotes, which have become more numerous lately.

Got any porcupines? Large climbing rodents of any other kinds? I’m the full width of the contenant away, so that could be just hot air on my part.

No porcupines. Lots of possums, raccoons, voles, a few mice, squirrels, pheasants, wild turkeys and owls. But the confusion comes from the fact that I always have all of those critters every year but I only had chewed up burs for two years. So if one of those critters did it, they would still be doing it, and they’re not. It’s weird.And why would any critter chew through a chestnut bur? There’s no way to do it without injuring yourself.