I discovered that my Reliance grape lost its bark on the main trunk. Bark got loose, so to check how bad it is I started pulling it off, and it just came off all sides opening dry middle wood . At this point, I assumed it is dead, though couple of upper buds(above the damage) still look swelled. It is only trunk I have on this grape. If I cut it on ground level, will it come from roots? If yes, will it be true to kind? Or should I just dig the roots out and start over? 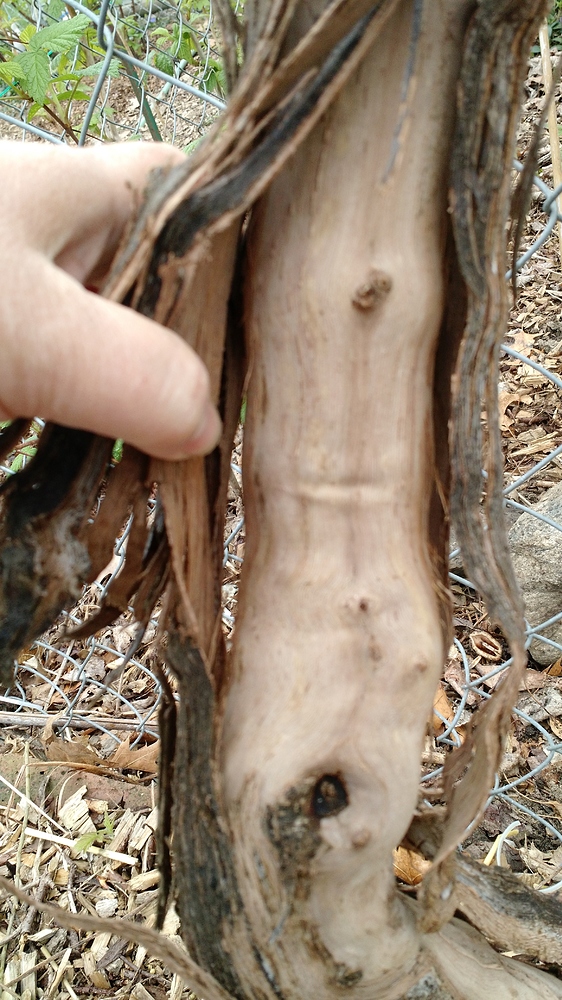 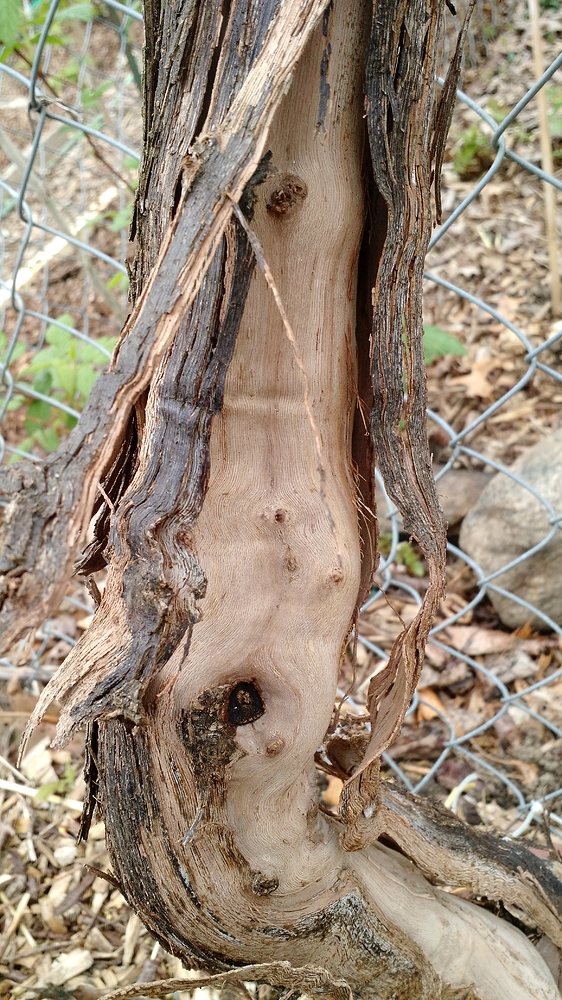 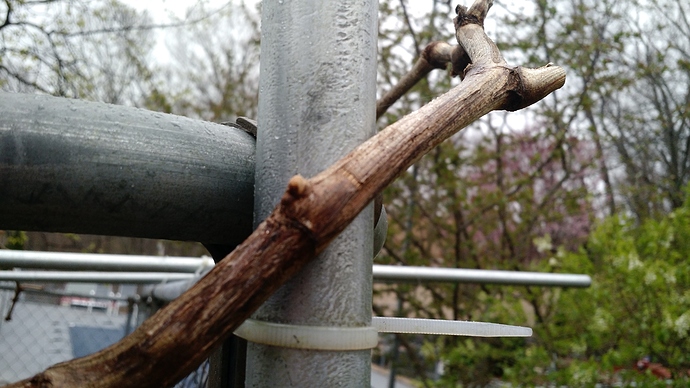 Hmm… did you try a scratch test on what is left there? It might just (hopefully) be the very outer bark?

No, I didn’t. It looked dead to me… It is hard, I don’t think I can scratch it with my finger nail, but I’ll go and try.

I’d probe with a pruning saw or knife just to be sure that I didn’t get half-way through my basal pruning cut to find live tissue.

But otherwise that is a bummer. Did you have a quick cold snap in the fall? It looks like it wasn’t very recent damage.

Asking because I want to put in a Reliance grape, but we have worse weather here in IA than in MA. So maybe I have to think about another grape.

We had a crazy jump from 85 to 19 back and forward last two weeks or so of Feb. Same thing we had last spring. I think this is what did it. I scratched it - trunk looks white(pale) under that light brown. Shoot has some green in it. But not all shoots. I think it is dead. Question is, what to do next. Dig it out?

I think it is dead. Question is, what to do next. Dig it out?

I agree with Drew- looks like it could still be alive, with the outer bark peeling a bit.

If it really is dead, there is chance it will send up new shoots. Do you happen to know if the vine was grown from a cutting or a graft? If a cutting, you could just let it grow, assuming you like Reliance. Otherwise, it could be a nice established root system to graft to.

If it is dead and no suckers come up, I don’t see any reason to try to dig up the roots. Sounds like it would be a lot of work. Just plant something else near by

Ha! It is easier said than done in my yard - there is NO nearby

! Every plant has it own and only available spot, so to plant something, I have to dig something. For new grape I have not only dig up the old roots, but also remove some raspberries that spread to old grape direction. They did not bother the large grape, but for a youngster they will be a threat. For the graft thing, I do not know if it was rooted or grafted - It bought it from HD in a pot, providing information is not really their thing…

I found an interesting article. May be my grape is not really dead yet…
http://www.hort.cornell.edu/goffinet/Anatomy_of_Winter_Injury_hi_res.pdf

For new grape I have not only dig up the old roots, but also remove some raspberries that spread to old grape direction. They did not bother the large grape, but for a youngster they will be a threat.

Removing a full size grape’s root system could be quite an undertaking. If I needed to plant something in that exact spot I would probably remove enough of the soil to saw/cut the main trunk away and add bit more soil around the new planting. 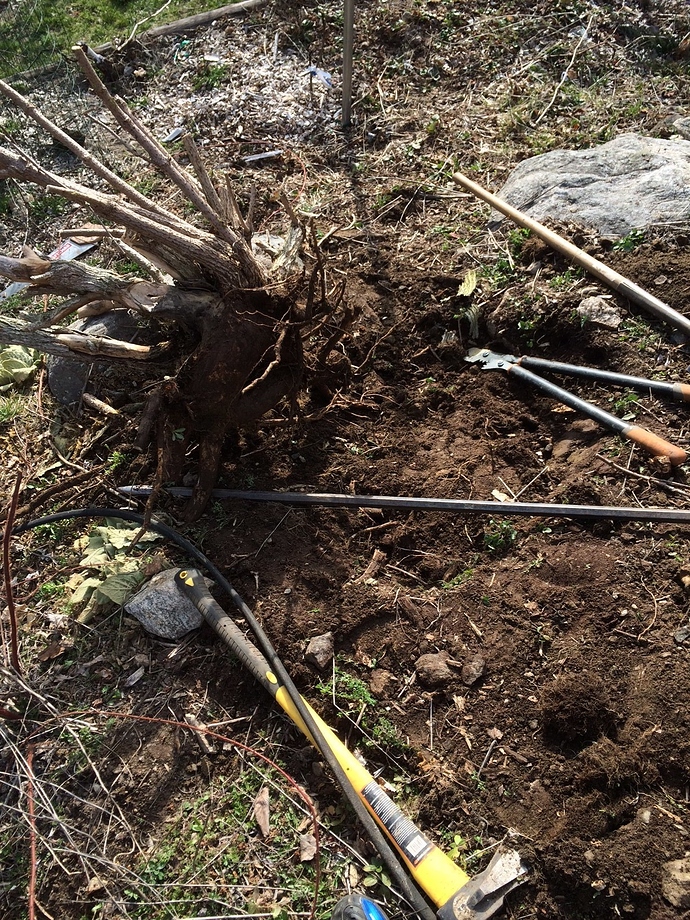 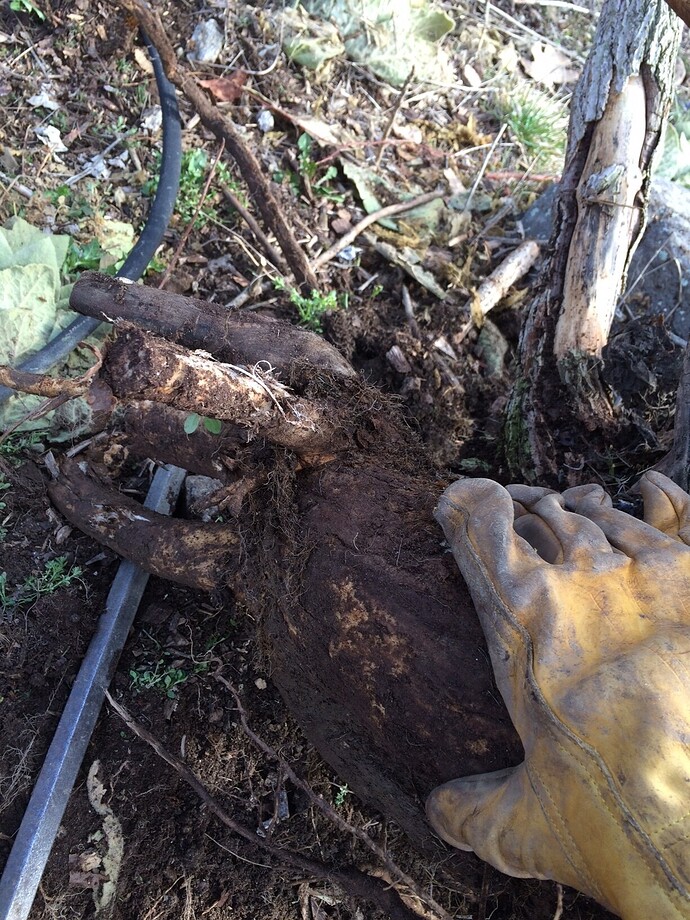 . My first one was a flowering bush of Philadélphus (got the Latin name form Russian common name) It was 7’ high and 3’ wide with a root ball about 2’ deep. My mother decided it is on the way in the garden and has to go, and I volunteered to move it instead of killing it. That was the first time I get my knowledge of moving established bushes/trees and human spine anatomy

.
For the grape, I was going to dig around the trunk and use old chain saw to just cut base of the trunk, to make a hole enough to plant. But I will wait a month or so, will see if it wakes up in any way.

Your grape looks perfectly fine to me. After 2-3 yrs age the outer bark peels off like that. I can’t be sure from those pictures if what’s left is uninjured. But the bark peeling is normal.

Agreed. Take a knife or saw to the trunk to check, dead wood will be brown and dry. Live wood will not be dry.

Yes, @fruitnut, that is what I am reading as well. I will watch it.
Thanks, @scottfsmith !

My question is, do you even like the grape? I know Reliance gets good reviews from around the country but for me it doesn’t produce much and I find the flavor wanting. We planted Jupiter at the same time and here it has been far more productive and flavorful. The only reason I haven’t dug Reliance out this year is because most folks prefer seedless grapes and if we finally get a crop it should make a nice gift basket.
It has been healthy though and not over vigorous still it’s hard for me to walk by with a shovel in my hand and not dig it up.

I never got a good crop from it, but I blame my own pruning mistakes. Finally, I think I got the pruning this year, but now it is questionable. The taste I liked, though fruit are very small. And seedless is must have - my husband doesn’t like seeded. Also, there are not too many choices for zone 5.

I don’t really like it in my climate, I topworked my main vine last spring. For me Jupiter is better, and the new U Ark grapes are better than Jupiter (at least for texture).

For hardy ones it sounds like Somerset is the best. I decided to add it this spring.

If your vine is that big though there is no reason to remove it. You could consider putting a Somerset in at one end and letting it eventually take over if you like it. I do a lot of that with my grapes.

I can’t agree more with you about Somerset. Reliance will fruit this year for the first time so I have not tasted it yet but Somerset is delicious, crunchy, seedless and super hardy. The berries and bunches were very small though but could be because it was first year of bearing.

I have very limited space of a 7 1/2’W x 13’L dog kennel to grow grapes. I use pergola-like structure on top . I guess I can probably plant a new one on another wall, and let it grow on the same structure, but it will be very crowded. Reliance for me is very vigorous. I am not sure the new one will be able to compete, especially keeping in mind that other wall much closer to neighbor’s mature tree on one side and raspberry patch on another. But I guess I can try. Not sure if it is not to late to buy it this year. Did you try Mars? This is what I see in local HD.

Looks like I was wrong - I WAS able to order it from Jung. I really need a therapy for impulsive buyer syndrome!

That alone will kill.