I’ve only seen birch. but I’m not sure what else you’d use–pines don’t grow shiitakes well because of the resin, and if you could get a softwood like alder in dowel plugs I think once well-colonized it might be like trying to pound a jelly bean with a hammer…

Don’t you need to wax the end cuts too?

no. people recommend waxing, as it reduces moisture loss and the likelihood of killing the plug spawn. it also helps keep slugs, etc. off. So the wax is thought to be helpful for several reasons, but it isn’t an absolute requirement.

A university publication I read ( Vermont I think? ) said there was no difference in production between logs with waxed ends and non-waxed ends. Perhaps in a dry climate it would be beneficial?

Waxing the plugs themselves doesn’t even seem “required” according to some things I read, but I’d rather not risk it.

How many plugs did you buy for that amount of logs? I have about the same size pile of red oak logs. I ordered 300 but I’m thinking I might need more. I am trying to inoculate 200 more dowels with some oak shavings that I made from the same oak and my power hand planner. It’s in mason jars now. I might have it to moist inside but it is growing and spreading. Does anyone have a good source for just plane 5/16" by one inch dowels? I am only finding 1/4’ dowels and mostly in 2" lengths. I broke them in half with pliers before boiling. I have been waiting a couple weeks since I cut the wood because we have been below freezing. My jars have been inoculating for about 10 days. I cut my logs in the last warm spell and wrapped them to protect them. We just got warm again with highs in the 50’s lows are upper 30’s. I am not sure my plugs will be ready in time for this cut of wood. If I need more I might try another variety like oyster.

Here is my attempt on inoculating more plugs. 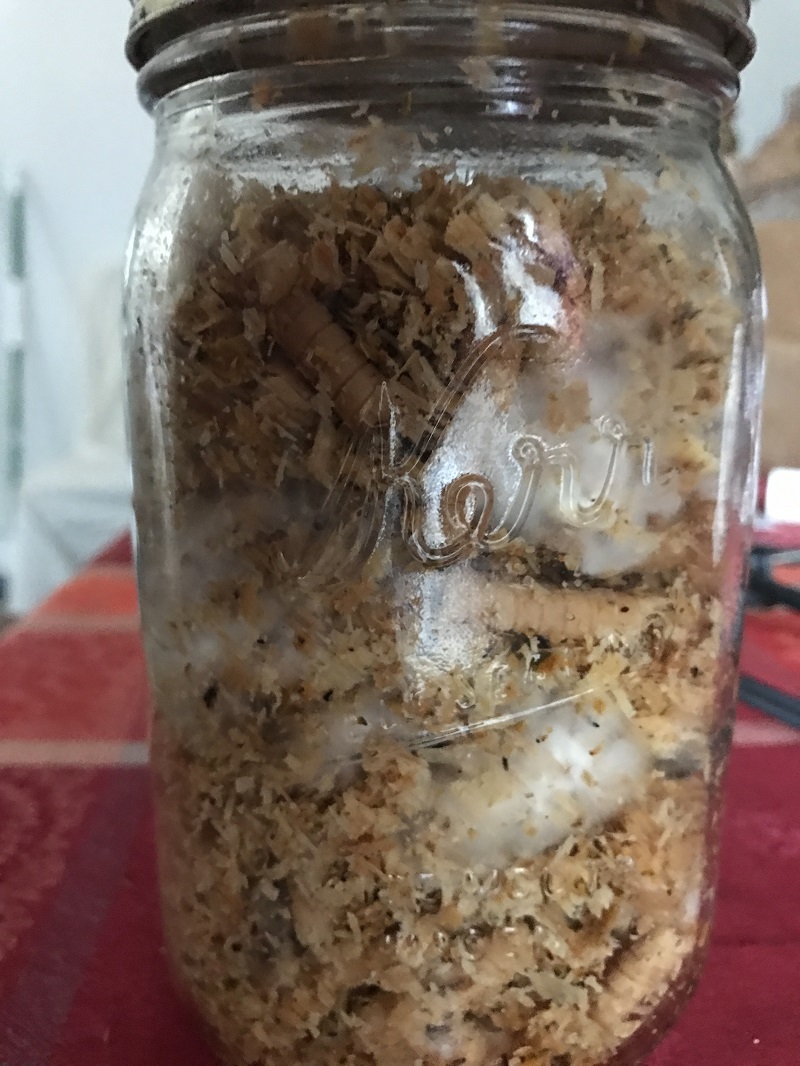 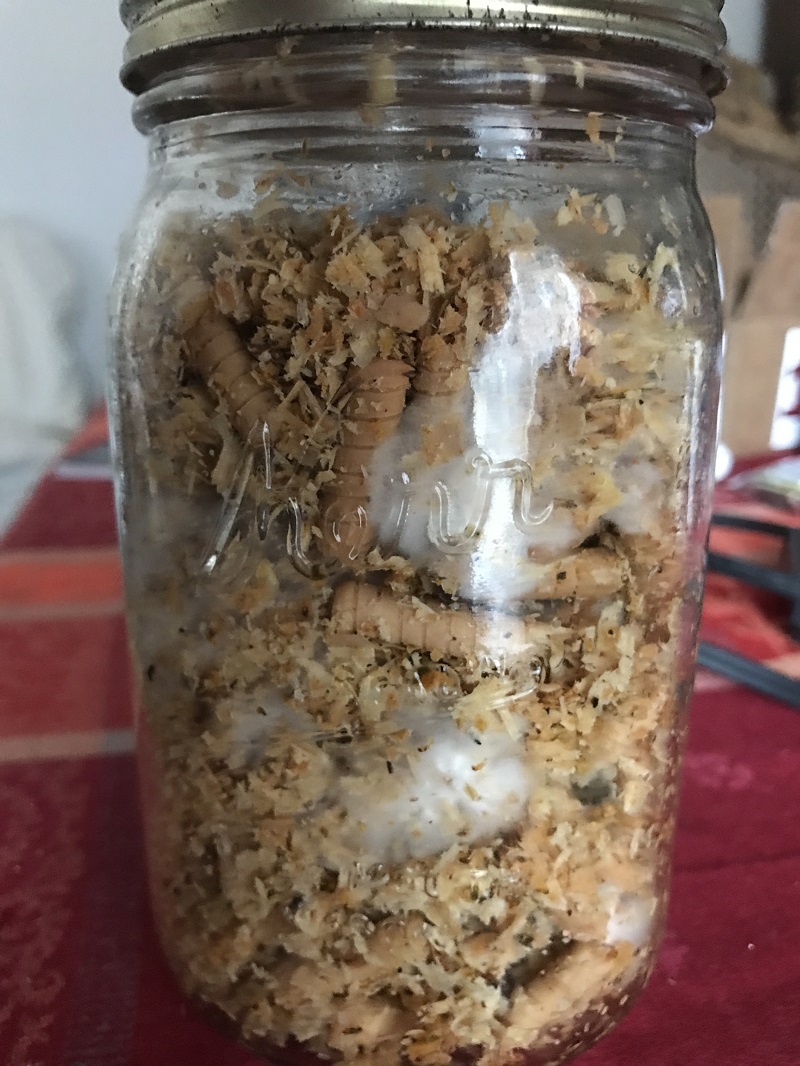 I over inoculated, recommendations are about 50 plugs per 40" log.

How warm should the weather be to inoculate the logs?

Above freezing temperature, you can start to innoculate. The logs should be cut in dormant time and wait after two weeks.

You can get mushroom earlier, probably in this fall.

I inoculated ten logs with 290 Shiitake plugs today. I’ll take a picture tomorrow. I noticed my logs do not have as much sapwood as preferred. How important is that? Some of my logs are about eight inches in diameter but only have about 15% sapwood. I noticed that the wax can pop off. It doesn’t stick very well. One popped off and I re-waxed it. I have them on the north side of the house. The sun never gets there. I saved the bigger logs too up to a foot in dia. Is it worth it to inoculate them too? I’m going to do the stump too. Even if it doesn’t produce it might help decay it. It’s only two inches above the ground.

My experience with mushroom growing from logs is that the diameter is the bigger, the better. I have no idea with 1 foot diameter logs, but would think they are Ok.
Wax plugs are very easily popped out . Melt wax and put on directly.

That’s good, I will inoculate them all then. I pounded in the plugs. They were a tight fit. I don’t think they will fall out. The wax was melted and painted on afterwords. It was the wax that didn’t want to stick on at least one that I bumped. The whole quarter sized dab came off.

Haven’t successfully fruited yet, but from what I read more sapwood is better for heavier fruiting sooner, but it’s not make it break. If the wax is coming off maybe it needs to be hotter or the logs are too wet? You can do any size log over 4" if you’re​ willing to move it as needed! I did these logs yesterday, pin oak and beech with WR-46 Shiitakes. 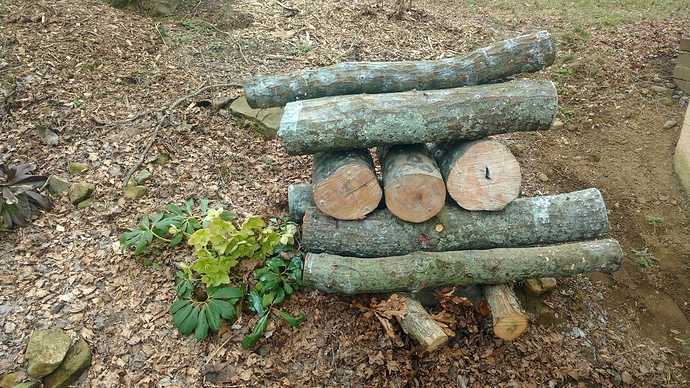 The logs were covered and dry. My wax at times was getting cold. I used a coffee can and while holding it it would start to thicken up, so maybe that was my problem. I was heating it in my outdoor wood stove in short burst in between logs.

Here are the ones I did yesterday 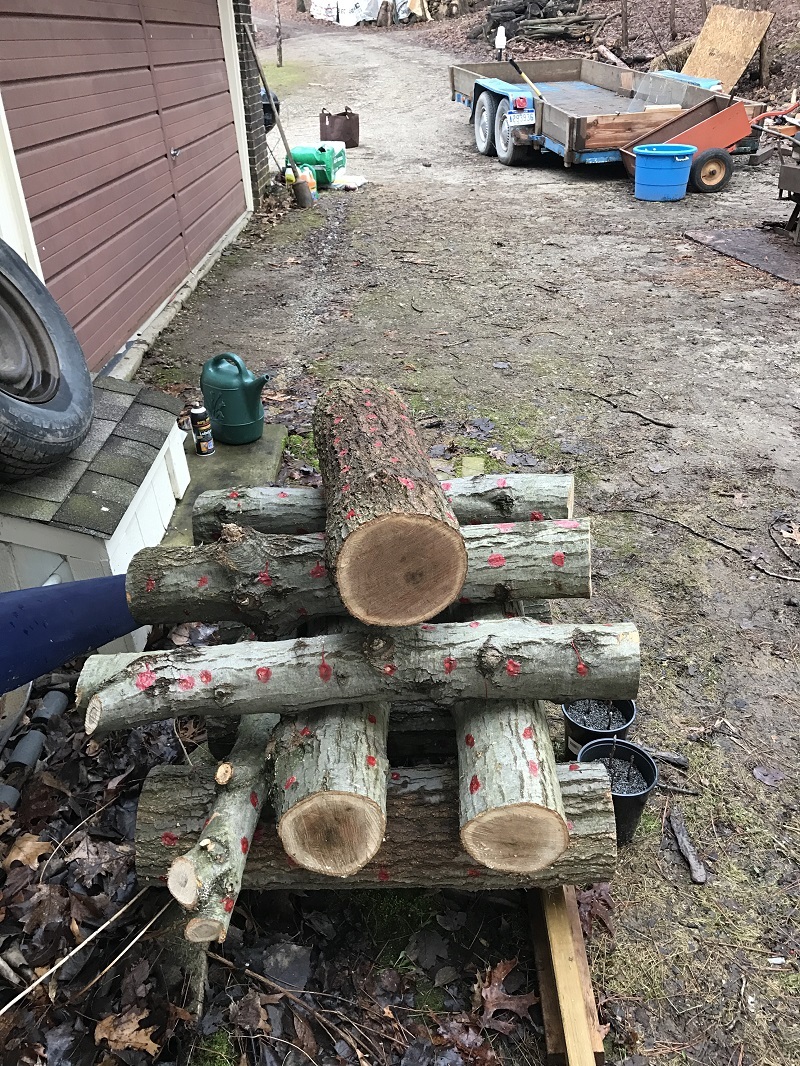 What woods do you have there? Looks like maple for some of it.

I cut one red oak down.

Here are a couple ideas to consider: I would say that most of the logs shown in this post could have done fine with only half the number of plugs used. Consider that the mycelium runs along the grain much more easily and quickly than across the grain, so a line of plugs inserted in a spiral formation along the log will be much more efficient (in several ways) than a row that goes straight down the grain. I look at this from a frugality standpoint, in that I can inoculate twice as many logs using this spiral, spread-out pattern; but also I’m wanting to get the mycelium to spread out quickly to block competitors…and fruit quickly. Ignoring frugality and just wanting the mycelium to spread out quickly, the spiral pattern is still very efficient. I also put a few plugs in the ends of the logs, in between row-ends, for the same reasons.
If Western Oregon were its own state, fungus would be the state flower, so maybe it isn’t so critical in drier areas.
Drawing of plug pattern, and photo from a recent hike (not a ‘selfie’):

that’s the theory. the practice is that only a small fraction of dowels takes, and I use mostly red oak. I do not know why. In practice, three dowels that took can colonize a 2.5 ft log. Once established, mycelium propagates fast along the grain.