Any suggestions for good carving pumpkin variety for Halloween?

Need something not too big, so that customer could pick up in field and carry short distance. Tolerance to powdery mildew would be a bonus.

Johnny’s Seed has a ton of variety to choose from and since I have never grown pumpkins before I don’t know where to start.

When I would buy pumpkins for my soon to be old job, Gladiator was a variety we bought. Can’t speak to ease of growing, but good size.

If you are planting for farm entertainment and sales, you might consider planting at least a bit of mini-pumpkins or white varieties. Parents of little kids are attracted by the cute factor of the minis, and that their wee ones can carry them around and display them indoors. People are also attracted to the whites because they want to be different and stand out, and because they are ghost colored.

I always think of Howden as the classic Halloween pumpkin. Nice size and shape, with a good sized stem.

I always grow a couple plants, but as Muddy says, the small ones might be better for some folks.

Bart,
I like howden as well. Connecticut field pumpkins were a parent of howden if I remember right and worked good when howden seed was not available. The vines get 20-25 foot here and howden make plenty of pumpkins.

You need to plant a couple of these and sell them for a premium. 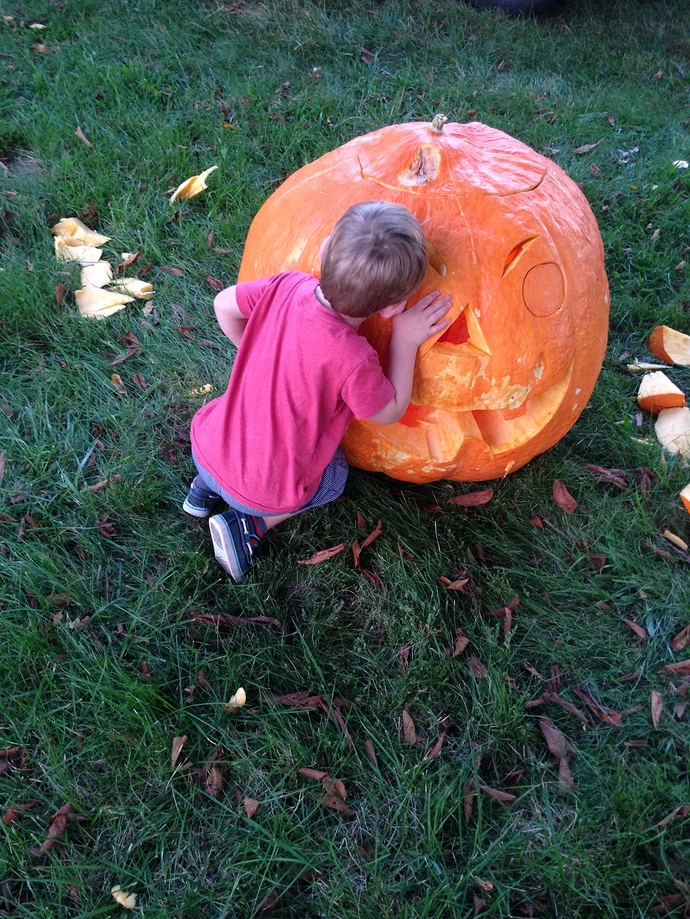 I can attest to this. When my wife and I got married (October 2010) she wanted mini-pumpkins as decorative seating card holders/party favors. I think at the time the going rate was around $0.75-$1/ea. Anyways, a small 40x40ft plot yielded in excess of 3 40 gallon rubbermaid tubs of good quality “Jack-be-little” type pumpkins. I sprayed at the approximate time of squash vine borer flight with an imidacloprid product labeled for pumpkins. I did have some issues with squash bugs by the end of the season, but I didn’t spray for them.

What a massive pumpkin! I’m not sure my loader could lift it!

It was pretty big , I put it on a tarp and me and the son in law drug it to the front yard. if you leave more than one on the vine they don’t get as big. I do think a couple of big pumpkins would look nice in a display and be a real eye catcher