Help me decide the fate of this apple tree

This tree is an old Russian variety called Korichnoe Polosatoe (Cinnamon Striped) I grafted on G41 from GREEN sourced scion in 2017. This year it was stroke badly by fire blight - only tree from 6 trees I have. I cut the bad branches somewhere in summer to stop the infection(circled blue). But later I noticed that at one of the cut infection spreaded on the trunk. (circled red). It covers at least 50% of the bark surface around the trunk on a distance of about 4-5 inches. I also noticed, that rootstock has some unrelated issues - bark cracked and peels off. With all said, what should be the outcome of this tree?
I see following choices:
1)Remove the tree now and forget about this variety because it is very FB suspectable
2)Get scion wood in winter from clear branches bellow the first cut and remove tree in spring, graft to a new rootstock(Probably B9, as the spot it grows in is very limited in size)
3) Cut the tree bellow the first cut and see how it will do next year
4) Cut the infected bark and see how it will do next year

Not an option: Graft to a different apple tree. I do not want the other tree to be affected and also it is tip bearing apple so a single branch wouldn’t do much. 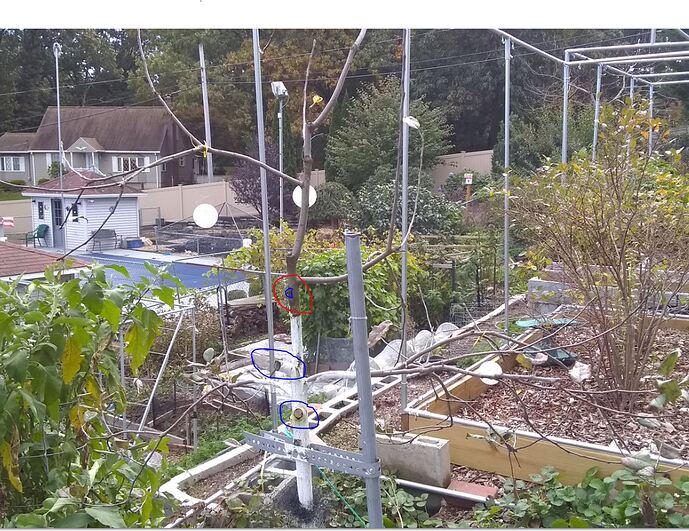 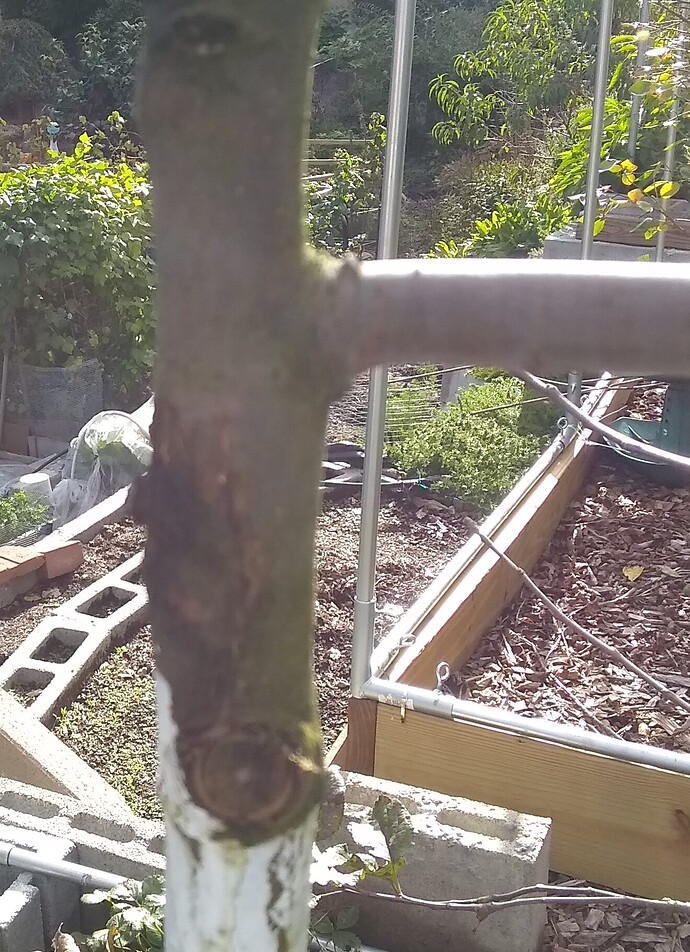 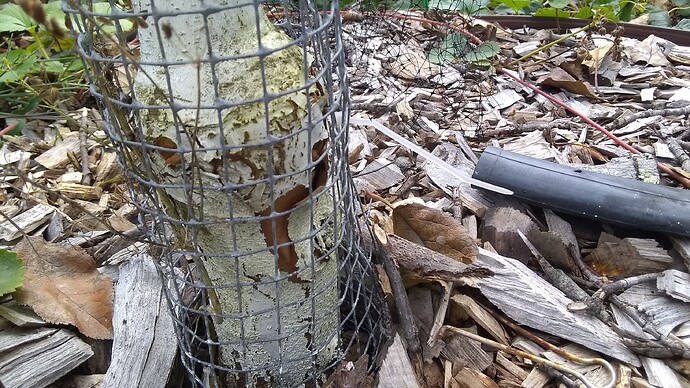 If I desired to keep the rare variety, I’d be patient and collect scions in January…and graft to a fireblight resistant rootstock…most of the Geneva roots are resistant.

Do you think newly grafted tree will have better chance that this one if I cut it to the lowest point just above most low branches? I have no place to plant a second one, other wise I would experiment…

All this depends on how attached you are in this particular cultivar. The list of apples out there is very very long.

Well… This is apple of my childhood, loved it a lot back then. Was very surprised to find it on GREEN. However, since I grafted and planted it I learned few things about it I didn’t realize before. It is tip bearing apple, it makes it difficult to maintain the size(very important!) and keep productive.It is a tree I knew growing in colder climate. Planting it here makes it summer apple instead of fall apple and makes picking window very short and it doesn’t store that well as when grown in colder zone and for desert apple it is not the best option. Also, it is fire blight suspect… And yes, bark is peeling bellow the graft.(Graft failing?). All that said, if I start my decision process over, I would probably say: no, thank you. But to kill the tree that already growing, that gave me some apple this year despite been sick, the first apple tree I ever grafted - that is not that easy decision…

How about a deep pruning AND doing a graft on a resistant rootstock (and maybe putting that dwarf little new tree in a large pot on the patio or something)?

My suggestion is to cut off where that metal cabling is you’re using to support and set (4) bark grafts to it. If it gets fireblight again soon, axe that thing… and start afresh on that same rootstock. You’ve got too much of an advantage not to use that rootstock over and over and again.

So you think that bark peeling on rootstock is not a concern?

I had peeling like this on all my 4 Geneva rootstocks I have. They have survived. This happened 3 years ago.

I think it’s a concern… Can it be explained? That is the question. Is that sunscald? What direction is that cracked bark facing? Did any of the other trees get it?

It is all over the outside of the rootstock. I think it is a result of a very wet summer - the rootstock exploded in size for the summer… This is only explanation I have. But looks like it is common for Geneva, and is not fatal.

Is there new bark underneath?

I think so, I didn’t peel it off, but I think there is a layer of bark below

If there is a new layer of bark underneath its just growing stress… unrelated to the FB issue; just poor timing for both to occur.

Here’s to illustrate why you do (4) or more bark grafts in order to create a bridgework of callous connecting the entire perimeter. This creates a lot of healing power to the rootstock. Plus, better feeding to the scion/bud selected to make your new tree(s). For this triple bark graft, next year I will remove those two shoots that were continuously pinched off this entire year. The callous ring remains in place and I have my new selected-cultivar. 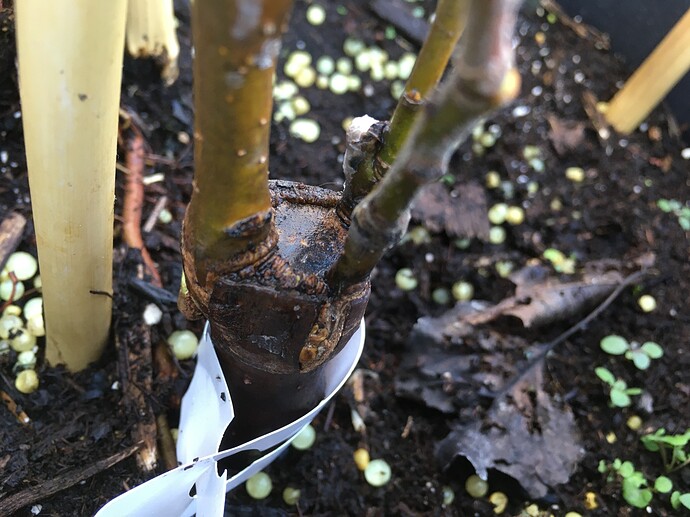 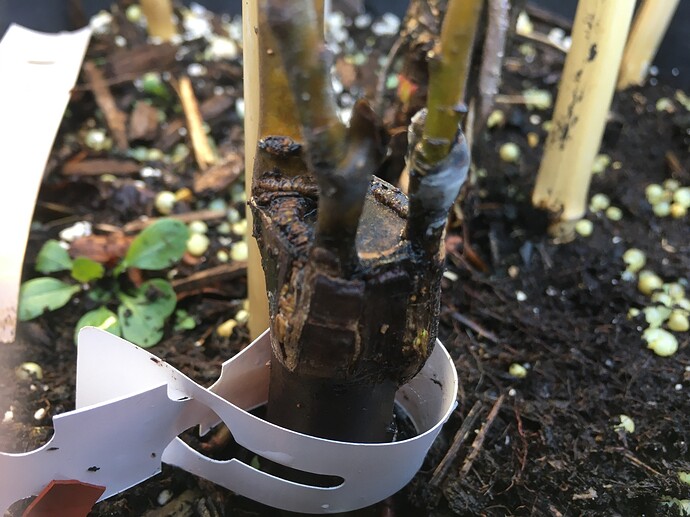 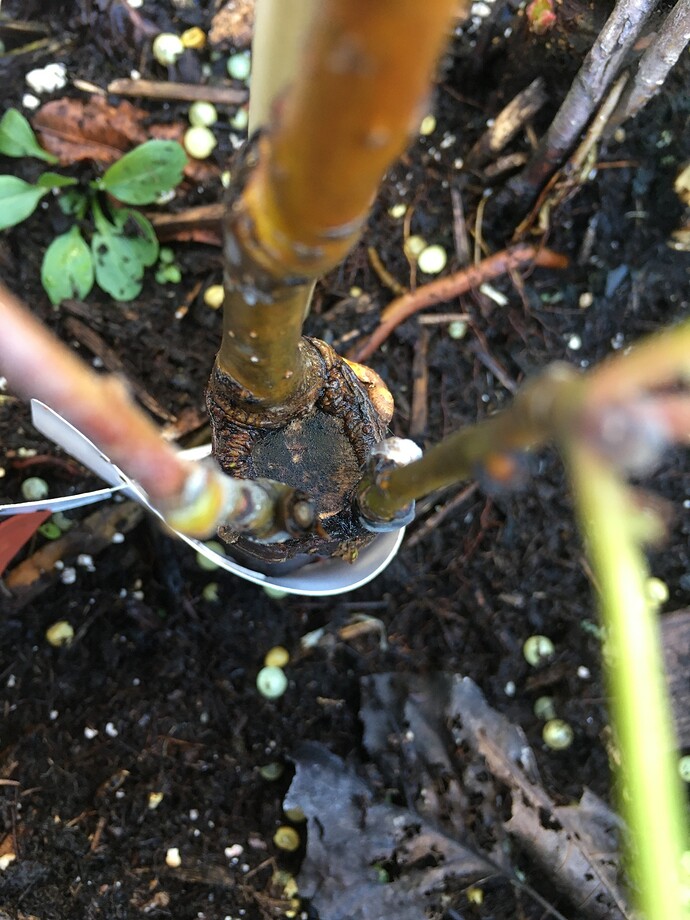 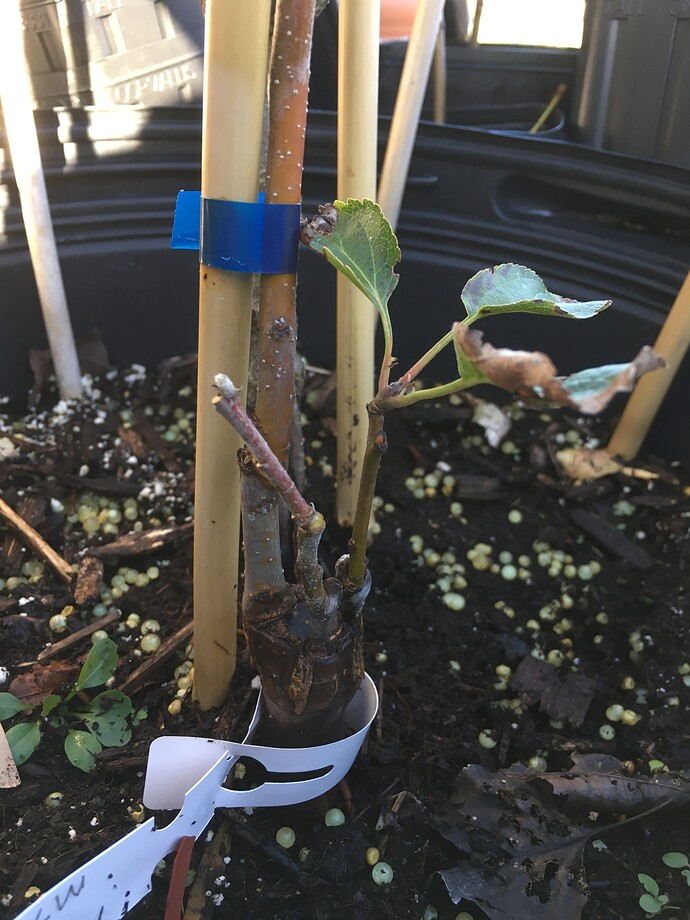 Beautiful work, Dax, as always. I’m always impressed by the degree to which you are blessed/cursed with the “giveash*t factor”!