Help! What is happening to my apple trees?

We noticed yesterday that our three apple trees (Empire, Honeycrisp, and Macintosh) that were full of gorgeous blossoms just a few days ago, are no longer… it appears that the blossoms are shriveled and many of the leaves are as well. There are black dots on some of the leaves. We usually have issues with Japanese beetles but that isn’t what this looks like. I don’t know if it’s a bug or some sort or disease. Any help you can give me on what might be happening and what we can do to clear the issue would be great. Hoping I can upload the photos since I am not sure how else to describe it. TIA!![ 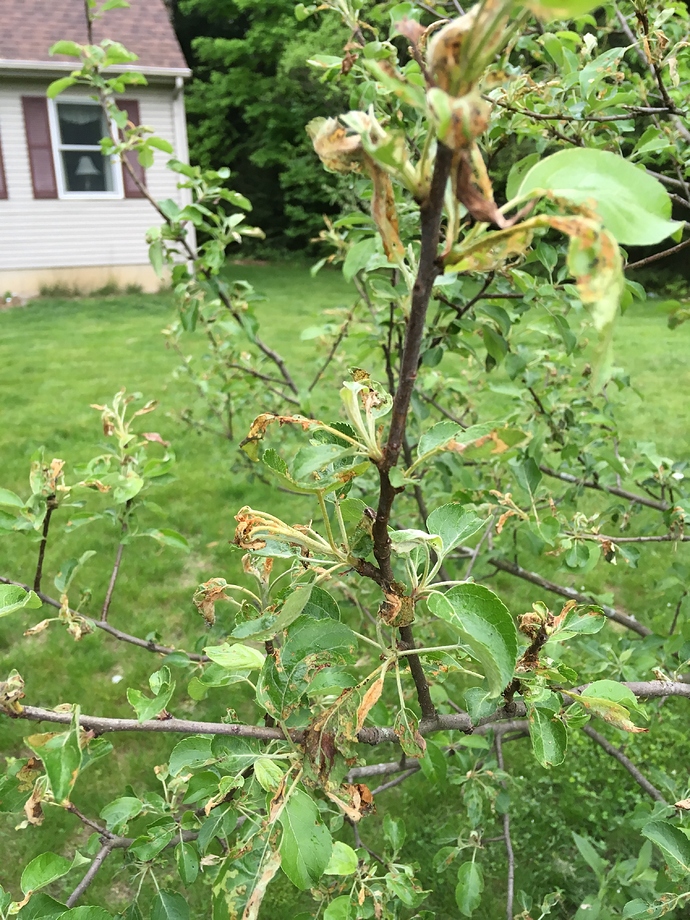 Please tell us more. When did you plant them? Are they just planted this year?

I (we) can’t tell without knowing more.

If I had to guess… I would assume that you bought them at a “big box store” about a week ago.
New potted plants are often too big for their roots.

It’s hard to tell without any closeups, but last year all of my apple trees got all shriveled and crinkly and stopped growing until the end of summer, when they recovered. I didn’t see any trace of aphids or pests under the leaves, but a farmer told me it’s leafhoppers, and they’re hard to see because they jump out of the way when you come to examine the tree. I can’t tell if this is your issue, but investigate further.

Sorry, it would only let me post one picture, since I’m new… and they are on my phone so I will respond to the questions, and then see if I can add another picture or two.

We bought them about 6 years ago, they have grown considerably since planting. They were purchased from local nurseries.

We are in northern Vermont, (zone 4-5), so it has been cool until May. We’ve had a few days of warm sun, followed by a few days of rain, off and on. We have sandy soil, so it usually drains well. I was just noticing on Monday how many apple blossoms there were, since we’ve not gotten any fruit from these trees yet, except one apple last fall. In previous years, they are usually attacked by Japanese beetles, (despite trying to use nematodes on the lawn,) though we haven’t seen any yet this year, and were prepared to try neem oil to keep them at bay. We haven’t treated them with anything since we’ve had them, nor have they been pruned regularly (we’re still learning) but I have been trimming the suckers off the bottom regularly.

My Empire tree actually looks like the branches are almost black on the ends of a few of them. Doing research, I’m worried it might be fire blight??

All of the shriveled leaves seem to have small black dots on them, not sure if they are a pest or some sort of growth/fungi? There are also what appear to be fungal spots on the trunks of the trees, which we’ve never been able to figure out what/why.

I will try to upload a few more photos from my phone.

Thanks for your help!!! 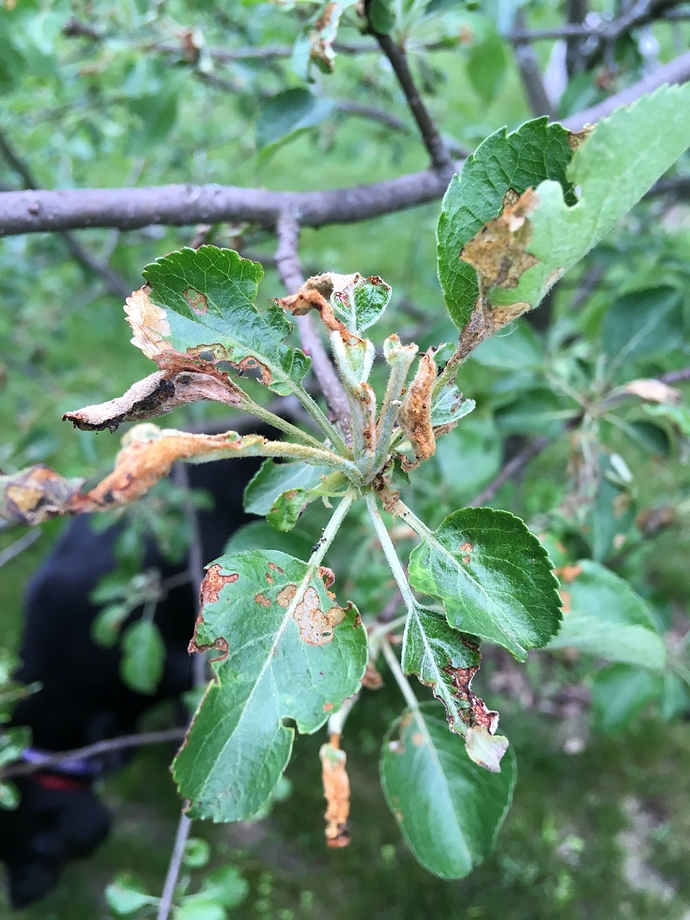 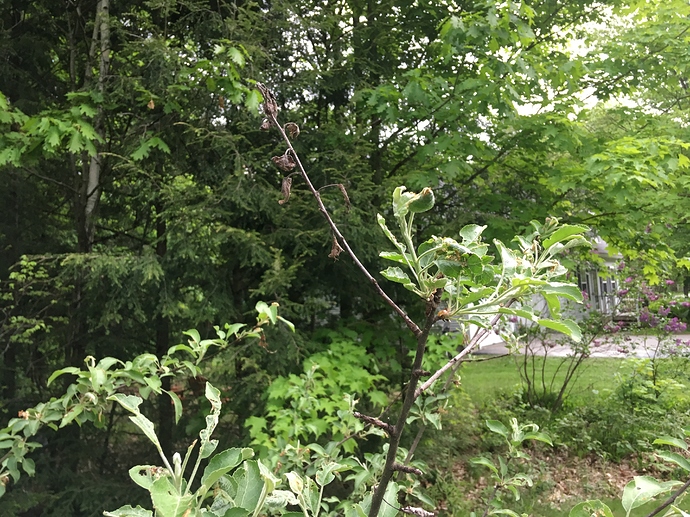 This is the one I am wondering about the black branches 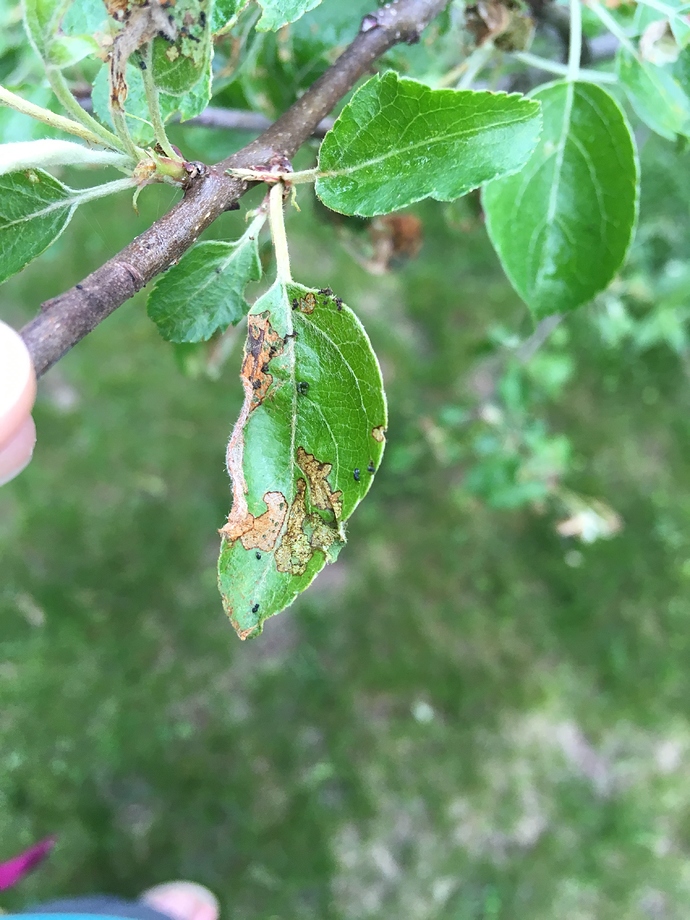 Sorry, it will only let me post the pictures one at a time. Thanks again!

The apple damage is an insect. Caterpiller of some kind.

I also thought some form of caterpillars. Spring is the time for leafrollers, eastern tent caterpillers and all the rest. That’s a lot of damaged leaves! Must have had hoards of caterpillers on the trees.
Hopefully they are done feeding since none showed up on your photos.

Great, thank you so much!! So what should I do to get rid of them? I don’t see any caterpillars anywhere on the trees, and I know an insecticide would need to be sprayed right on them, correct? And what can I do to try to get the trees back to health, anything??