So finally I’ve got sulfuric acid and am adding it to my water…but does anyone have a good (cheap) way to actually test the pH of the resulting water? I’ve purchased some pH paper and I have trouble reading the colors. Plus, the paper turns one color at the bottom and then another color as it travels up the paper and I’m not sure which one I should use, so I’m thinking of giving up on the paper…but now what?

Or if anyone has a better idea than the sulfuric acid I’m all ears.

Go to sanitationtools.com and select the 4-7 pH McolorpHast strips. They’ve worked for me. You want to acidify to 4.5-5.

Those colorpHast strips are the best. I work in an environmental chemistry research lab, and those are what we use.

Perhaps you know that VSOP is growing blueberries, but if not isn’t a pH of 4.5 to 5 a bit acidic for most everything else?

Acidifying to pH 4.5 - 5 would closely match the pH of rainwater. Though you’d be still adding the salt to your soil, which is unavoidable when irrigating. Adding salt usually depends on the ratio of Sodium to Calcium/Magnesium, as excess sodium disperses clay minerals and damages the soil structure.

I had always read that rain water is slightly acidic, 5.6-5.8, due to its interaction with CO2 in the air, and that anything below 5.6 was considered acid rain. Has that changed?

Thank you very much. I will try those pH papers.

And I am growing blueberries (sorry for not being clear.)

It is good to know I can acidify the water down to 4.5. My beds had a lot of peat moss and a little sulfur added, and the pH was approx. 5.0. But this summer was dry, and they needed to be irrigated a lot. I had no idea the irrigation water could send the pH so high, so quickly. Lesson learned.

How are you applying the acid water? By hand or via an irrigation system? Would like to learn how someone does this via a drip system.

You are right. The normal pH of pristine rain is about 5.6. The pH of rain in the eastern US is around 5.0 or less because of nitric and sulfuric acid from air pollution.

I do it by hand, so I’m sorry I can’t help you with the irrigation method. I don’t have that many blueberries so it is easier to put the acid/water mix in a watering can.

Right now,I’m using an EZ-FLO unit with a 3 gallon tank.Battery acid is put in it,about a cup at a time for about 40 Blueberry plants.During the growing season,the timer connected to it,will start the flow just about every day for about 15 minutes. I add acid about once or twice a week.
Water soluble fertilizer is poured in every 2-3 weeks.
There are better devices, but this one works okay. Brady

Do you mix the acid first in the tank or only have the acid sitting in the EZFLO tank? I guess if have been doing it you are getting good results, curious if you ever tested pH out of the drippers to see what ratio it comes out at. I like the idea. I’m not into hand watering anything!

The solution tank is almost full of water when the acid is added,maybe about a pint emptied out first.
I use those cheap pH guages sometimes,stuck in the soil at different distances from the fertigator.Almost all of my plants are in containers.
Most of them look good and it sure beats hand watering,especially the ones on the carport roof.Brady

Remember to always add acid to water, not water to acid. A large amount of heat can be released adding water to acid, So much so it can splash from boiling. Baking soda can neutralize acid as can large amounts of water. Best keep both around nearby in case of a spill.

Hi guys. I hate to bring back a thread from 2016 but I do have a question regarding adding sulfuric acid to water for blueberries. I Purchased blueberries last fall on the clearance deal which was probably not the smartest in the first place. Since then they have struggled. I repotted them this early spring with a mixture of Peat Moss and the natural soil of my yard. The plan was to plant them sometime in June when I have a chance. It was a very busy spring with planting other things.

In hindsight I should have not bought them until after my soil was established and more acidic. But I got them for three dollars a plant and it was really hard to pass up. If they die then I’ll just replace them in the spring.

I got around to planting them last week. I did a mixture of around 40% natural soil which is a clay/loam mixture and mixed with a natural sand soil from another spot in my yard. 30% Peat moss. About 20% shredded pine bark and 10% Ish composted manure( which I hope doesn’t increase my pH. Multiple reviews were online stating It could go one way or the other).

So now to my question. The pH of the soil after mixing everything together is 7.5. I Also added sulfur to it about a cup and a half and mixed it into the ground with a large tiller. Then sprinkled a little on the top and I am covering it with about 1 inch of pine bark. I realize it will take time to lower the pH of the soil naturally. I was reading online that here in Utah we have a lot of carbonates in the water that prevent from lowering the pH especially if we are using secondary water. The pH of the secondary water is also 7 - 7.5.

I have read that many people you sulfuric acid purchased from auto parts stores. The one I have purchased does not specifically state what percentage the sulfuric acid is nor does it list any ingredients other than it states sulfuric acid on the box. I will throw in a photo just so you can see. Is there a generally other additives that are added to battery acid when bought from the store? I would hate to poison the soil or the blueberry plants.
Also if I do use this I know that I am adding little amounts until I achieve a pH that is needed. Should I do this for every watering? And if I do this To a newly planted blueberry plant will it put it in shock? I guess what I am really asking is should I slowly decrease the pH over a few waterings to around five or six in a few weeks or so? Or could I just drastically change it and it would not affect the blueberry plant?

I bought the sulfuric acid from O’Reilly auto parts for about eight dollars. 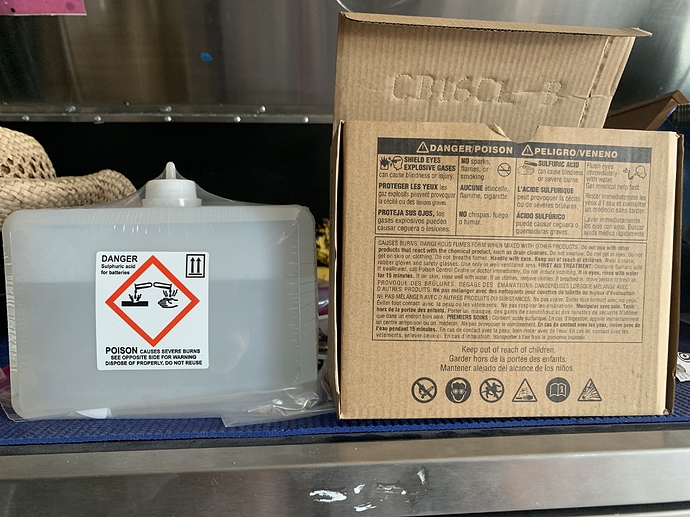 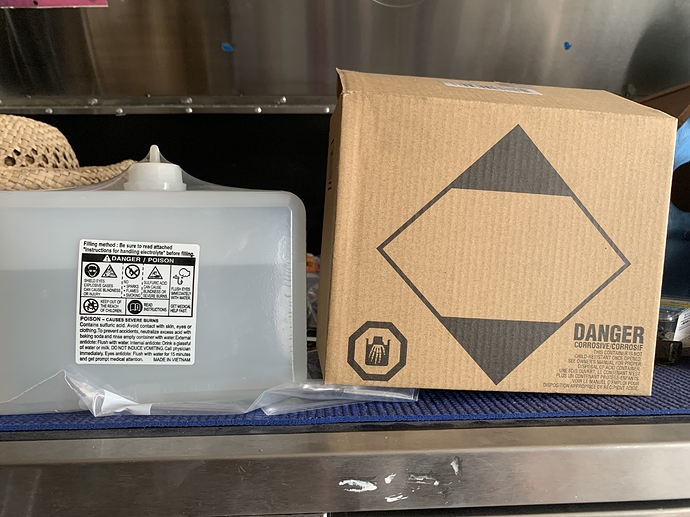 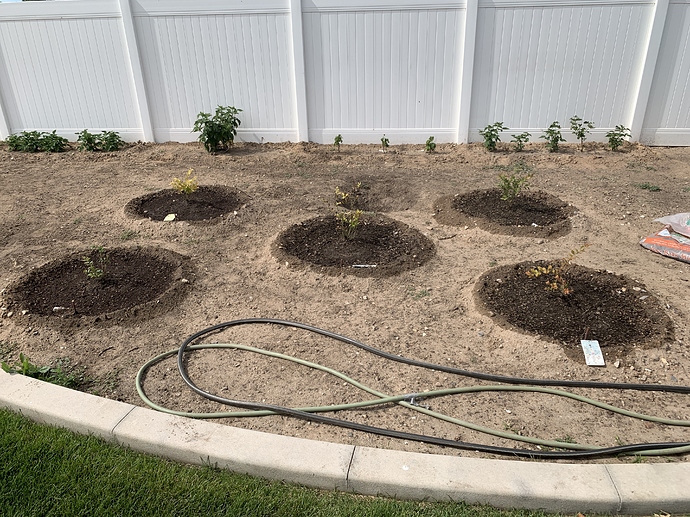 The one I have purchased does not specifically state what percentage the sulfuric acid is nor does it list any ingredients other than it states sulfuric acid on the box.

Well not many use sulfuric acid. I have used it. I do not anymore as I have enough rainwater these days. My rain here is 5.0 All battery acid is 30% Remember acid into water and never water into acid.

Yes you want to drastically change the pH. But using acid water will only knock it down for a bit. So you’re not really drastically changing anything. Rain is 5.0 here. The plant will have less shock if it can function correctly Like absorb nutrients. If at the wrong pH all the food in the world can be added and it will starve. Yes find out what will lower water to 5.0. 4.5 is as low as you can go. But better have a buffer unless you know you are getting correct readings. 5.0 is safe and will help. I record amount needed and use for the rest of season. Setting it at 5.0 allows you some room to error higher or lower. Check it again the 2nd watering and if amount seems accurate you’re good for the season. I used to check more, and mine was consistent. You can always check anytime.
The sulfur works very well but needs time. If you used too much it could kill them. After 3 months check soil pH. If it goes below 4.5 use tap water to water for a few weeks. If you check and it’s 3.x you should flush the plants with tape water for a long time. You need to flush the sulfuric acid out.
I have learned a lot since this thread started.
Best to use only pine bark and peat But nothing else. Your soil will be where you need the pH longer. Blueberries cannot absorb many nitrates They have limited receptors and it can poison them. They can absorb it all but cannot metabolize it and it poison’s them. Cow manure has a lot! They feed on Ammonium or the urea forms of nitrogen. Not nitrates which most fertilizer is. Look for acid loving fertilizer. For Organic use Hollytone or cottonseed meal. Some blueberries tolerate a higher pH others do not. All gardening is local.

Even pure peat and pine bark will lose acidity with time as it composts, so sulfur seems the best option but it is hard to figure out the right amount to use. Follow label instructions. The acid water alone will not correct the pH for long. The sulfur will but as mentioned not that easy to use correctly. I killed 2 so far with too much. I think I have it down now.

This dilute solution will get you close to where you want to go at 5 to one or so.

I use a lot of 90% sulfur - your observation about sulfur killing plants has me worried.
From what I’ve read, it takes quite a bit of sulfur to move soil pH downward.
How much were you applying and in what way?

Sorry for the delay. I just was at work. Thank you for the response I appreciate it. I’m just curious how are you collecting rainwater?

I Purchased ph test strips From Amazon and they should be here on Thursday. I will be sure to test the water before I use it. I am hoping that sulfur will do a good enough job adjusting the soil pH and I won’t need to do much of this next year. Fingers crossed. Do you suggest a certain brand or type of soil pH meter? This is the one I have been using and it seems to be working correctly. If you suggest a nicer one I am totally OK with buying it. I would like to do this the correct way.