My parents have a rather interesting 3/4 acre property with some very, very old trees on it. Thought you all might enjoy a virtual tour of it!

My dad bought this property over 50 years ago, and the house itself is ~150 years old. It’s located in Sebastopol, CA, a few blocks away from Luther Burbank’s test orchard, though I don’t think it was ever part of his property. Many of the trees were mature when my dad acquired the property and who knows where they came from originally.

Both my parents like fruit trees but aren’t interested in maintaining them. They’ve planted a few over the years and in general have lost track of what trees they planted and what was original. They don’t water any of the mature trees and have never treated anything with pesticides. Nothing has ever been pruned or thinned except for a year ago. Last spring I grafted some spare scions to a few trees and did some tentative pruning (I don’t know how to prune mature trees, especially ones that are this weirdly overgrown) and in the fall my mom hired someone to prune some of the trees too.

I’m continually stunned by just how much fruit, and how much good fruit, is produced by these trees despite almost total neglect. As I’ve only really gotten into fruit and grafting the last few years, I’m working on figuring out how to maintain them for my family. My plan is to graft backups of all the good trees and to hire someone who knows what they’re doing to try to prune the poor old trees into better shape. But they’ve been doing pretty well without my help.

I’ll post each tree below as I get decent pics of them. If anyone has any ideas on what each variety might be, I’d love to hear it!

My mom planted this asian pear about 30 years ago. It’s survived substantial fireblight and neglect and despite there being no other pears in pollination range it produces armloads of picture-perfect fruit every year. I believe it is a Shinseiki pear based on the fruit’s appearance and flavor, but could be wrong there. It has a very long season and doesn’t develop any bug issues until very late in the season. The fruit is sweet and crisp and absolutely delicious. 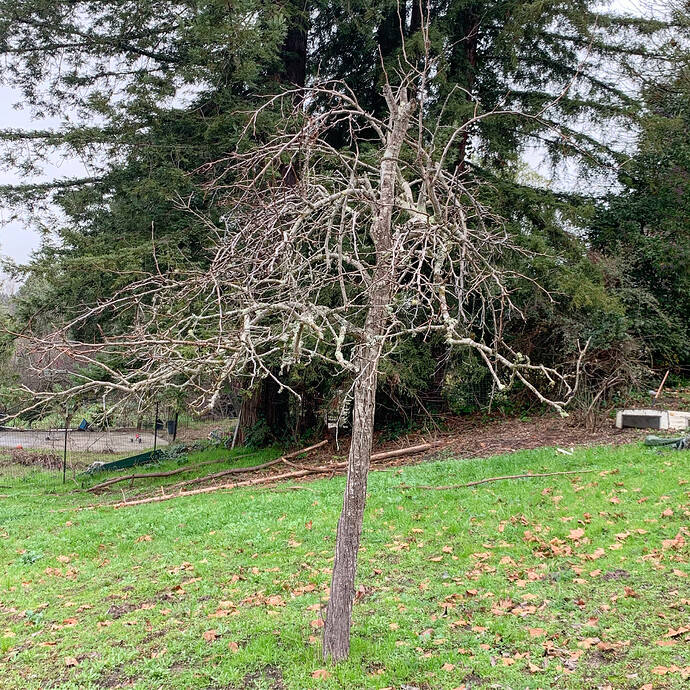 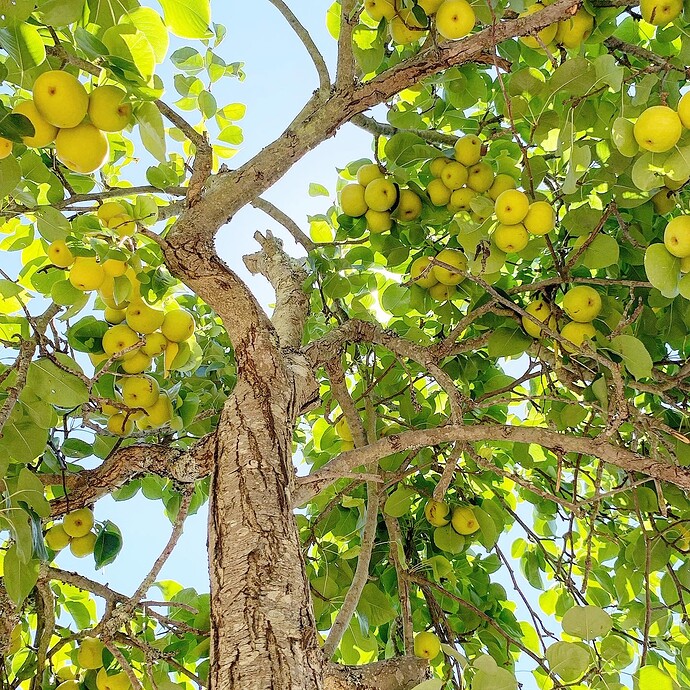 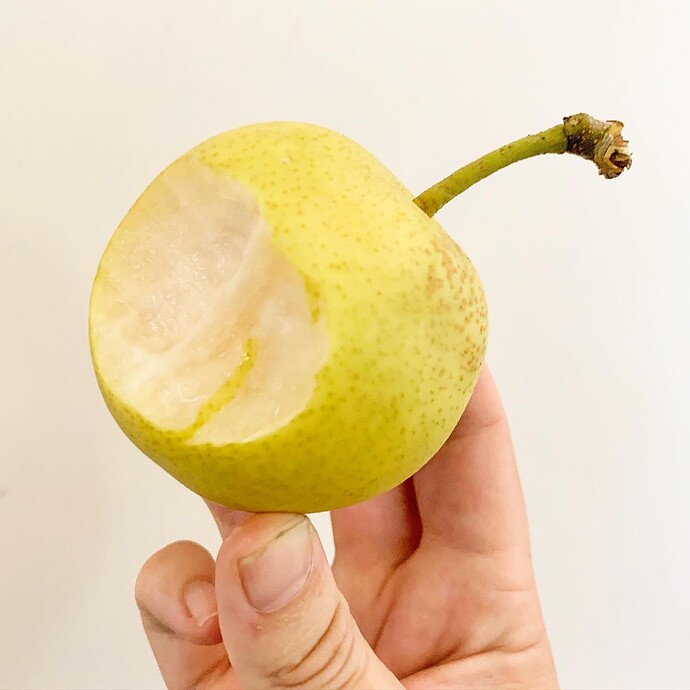 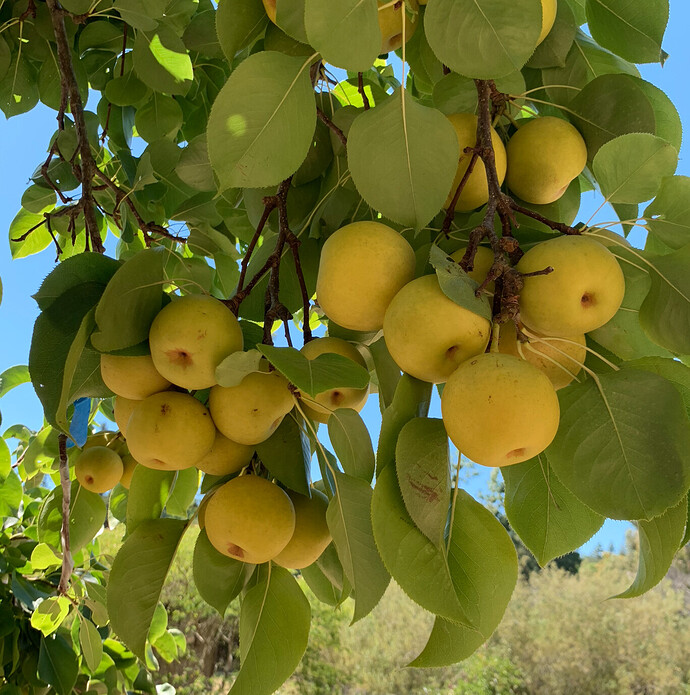 This tree is a weird one. I believe that the standing tree is a graft and the fallen tree (which has only fallen in the last few years) is a rootstock that sprouted up. This tree was mature when my dad bought the lot. He claims that at one point he grew an apple from seed and planted it here and the fallen tree is the result, but I don’t think he would have planted it so insanely close to an adult tree (I think his tree died and he’s misremembering where it is). However, I can’t find a graft union. Still, I’m curious about what would have been used as rootstock in this area 60+ years ago. Seedlings maybe? My mom brings a field blend of both these apples to the community apple press every year and presses them into sweet cider, then freezes it and we drink it throughout the year. Though neither apple is particularly great on its own, as a blend of juice it’s absolutely amazing.

A few years ago: 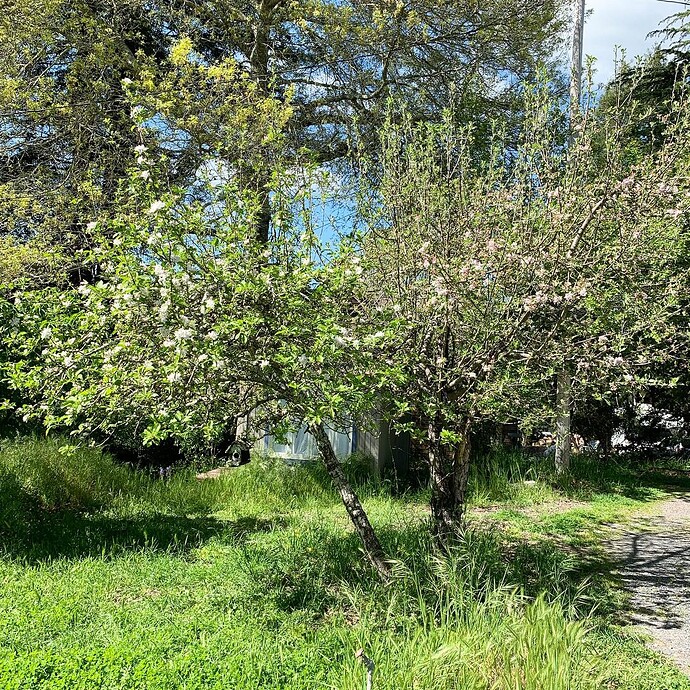 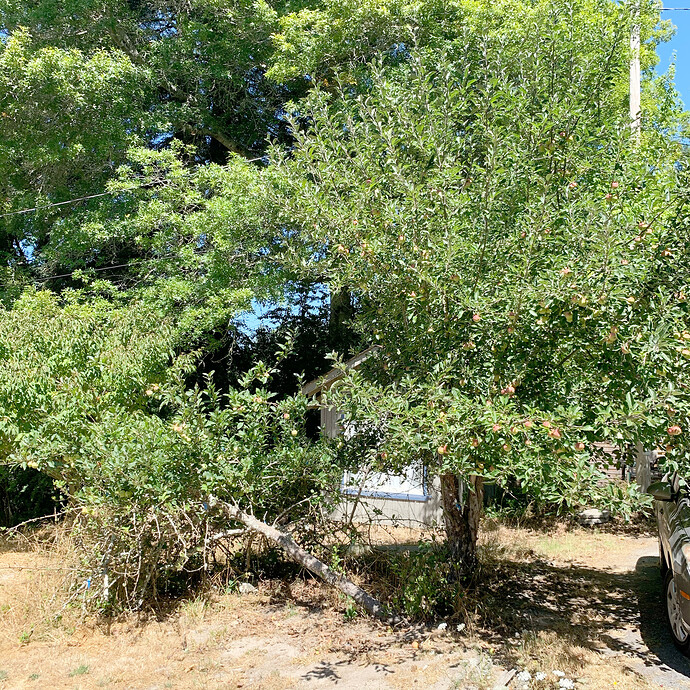 The standing apple produces these pretty, mostly red with some russet apples. They have a pleasantly sweet (if not very complex) flavor, a very classic “cider” taste with a hint of spice, and a crisp texture. Some of my mom’s apple press friends think the red apple might be Baldwin though I’m not convinced (and have never tried a real Baldwin to compare). They are pretty prone to worm attack, moreso than the other tree. 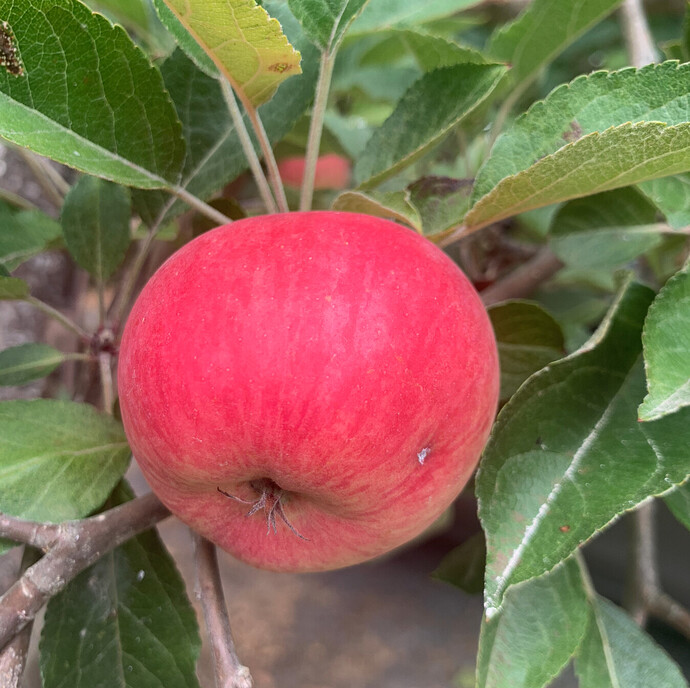 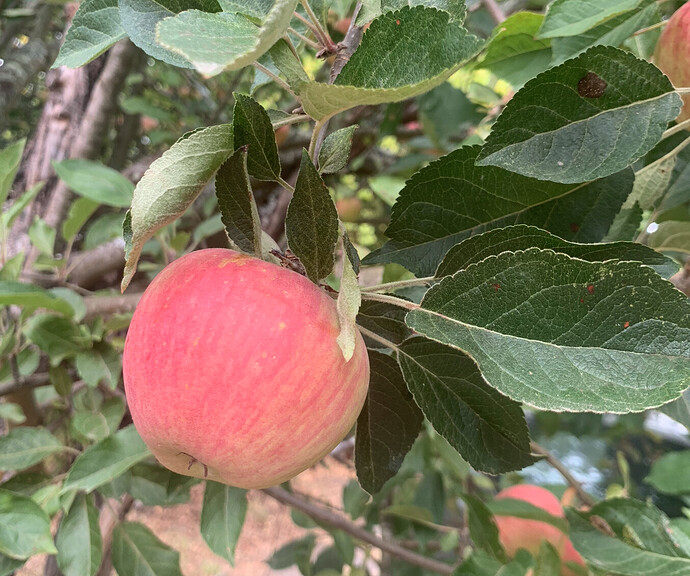 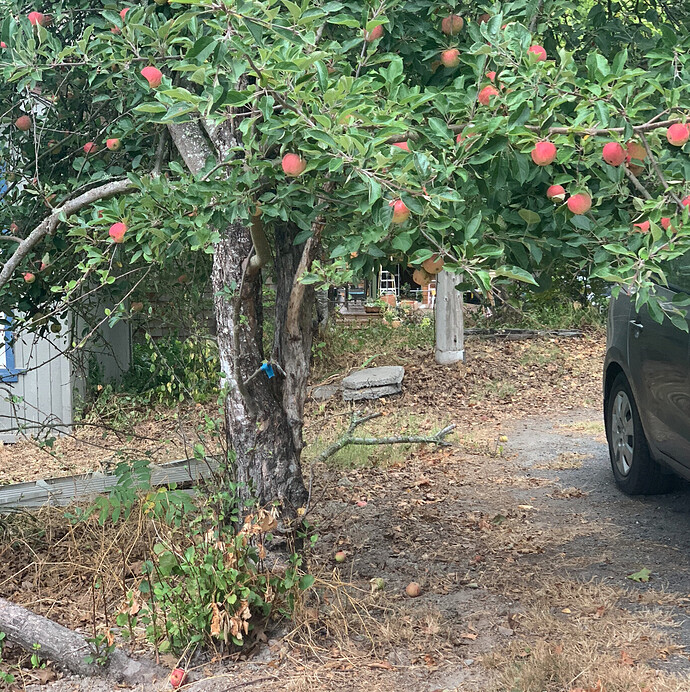 The fallen apple produces these strange, pale green/white apples. They only get a red blush if sunburned. They hang well into November if we haven’t picked them all, when the red apples have gone mealy, and they bloom a few weeks earlier than the red too. Dense flesh, with a nice sweet-tart balance and a refreshing lightly floral and vegetal flavor. Nothing remarkable but better than many grocery store apples, and probably my favorite on the property. Many people online have said the pale apples look like Transparent, but it doesn’t bruise or spoil as quickly as reports say Transparent does. I have grafted Transparent to the tree and hopefully will be able to compare and contrast eventually! I think it looks a lot like some Antonovka apples, though I wonder if they would have been used as rootstock in this area in the proper timeframe. 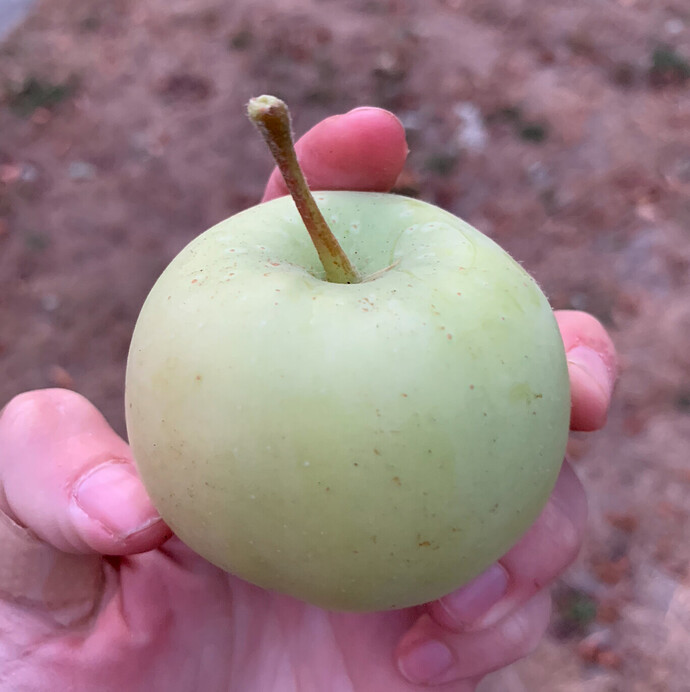 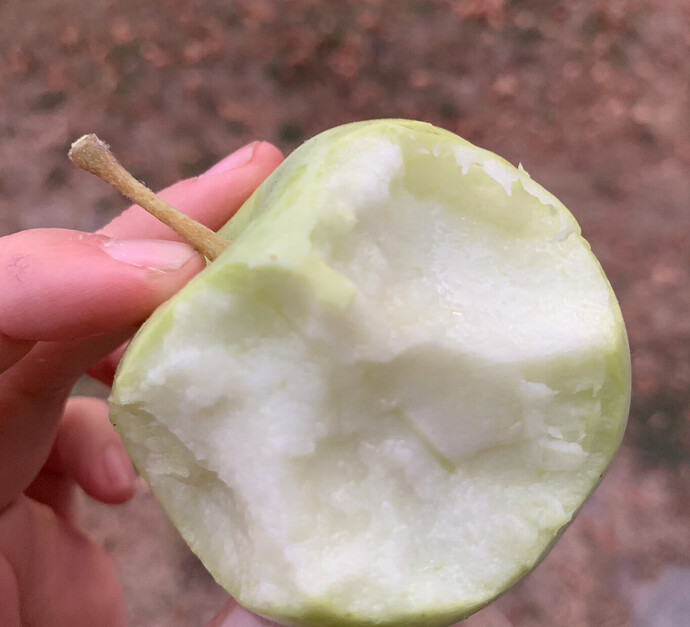 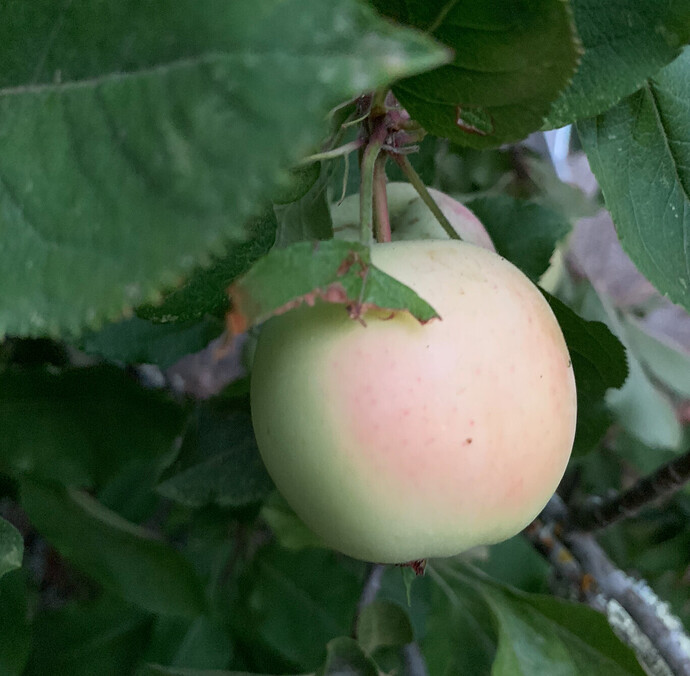 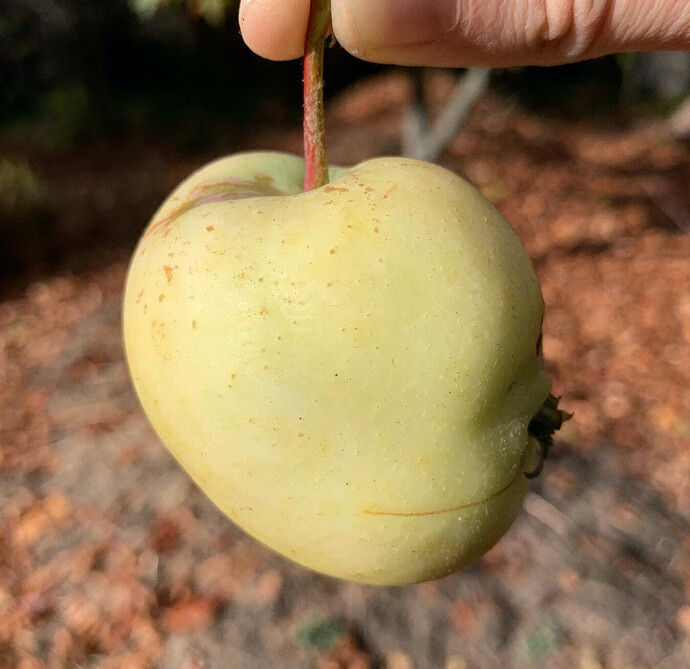 the shape is wrong for a y. transparent and they turn brown seconds after biting into them. easaily bruised as well and are extremely early here.

Y. Transparent is a summer apple, ripe in July. No chance in the world it would hang on the tree into November.