Reassuring that wrapping in bags worked well. I grafted 90 trees over the past couple weeks and about half I did this method on the hot pipe

Wow, this is long thread! I’m on solar, so can’t usually run anything pulling signficant current 24/7 Though I can if I take the time, set up a relay that turns stuff on and off when there is surplus power coming into the system. So, I’ve never used any heat in callousing grafts. But I think my climate is maybe more forgiving than many. I’m a pretty rudimentary grafter. I’ll look forward to your graft report.

What’s your opinion on constriction of the graft union in the first months of growth? I often leave my grafts wrapped through the season just out of inattention and occasionally get a “waisted” graft. I’ve not noticed much problem, but also haven’t really paid that close attention to growth on those v.s. unconstricted grafts.

I like to decide in mid-July every year and I un-wrap.

My friend pushing 80 leaves them on and by the time he gets to them the wood can be pale or sometimes but rarely caved in from the tree having grown. This is mostly electrical tape from him/Gary. Gary’s an excellent grafter but isn’t clean going about the little things and that’s where I step in and furvously annoy him to be quite honest. It’s always smiles though. He says “let the doggone tree push it off & stay away from (his) grafts.” He’s joking and it’s lots of fun.

Obviously in over 40-years of grafting that Gary says they don’t need removing. Doesn’t matter to him whether 1/4" pencil quick whip and tongues or 4" scaffold grafts with four scions - he’s going to leave the tape on.

I knew you would be on solar but don’t know too much in general about living off the grid. I wan’t solar though. It’s a part of my upcoming plans & as soon as possible. 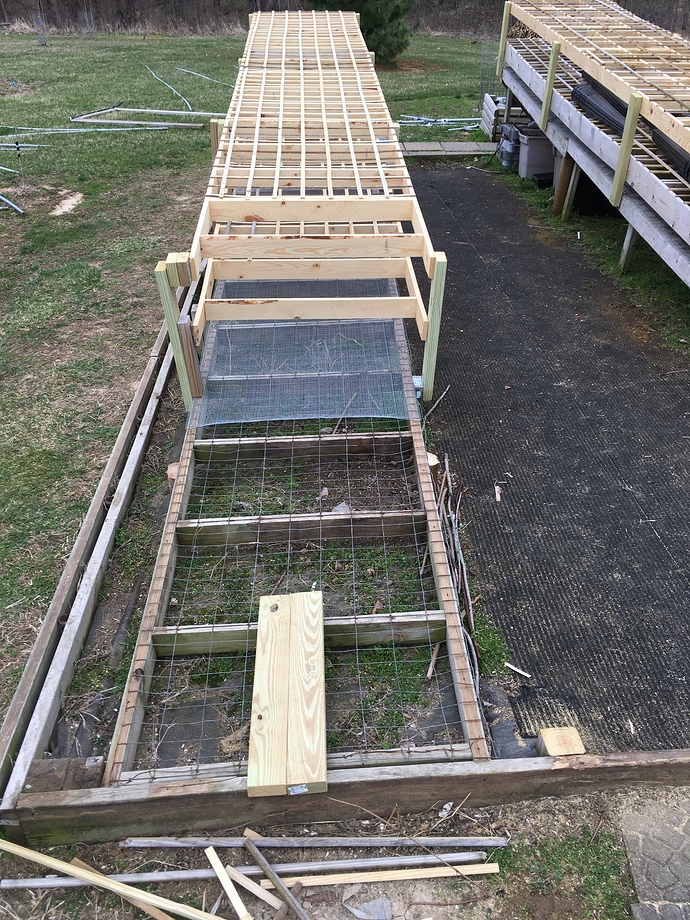 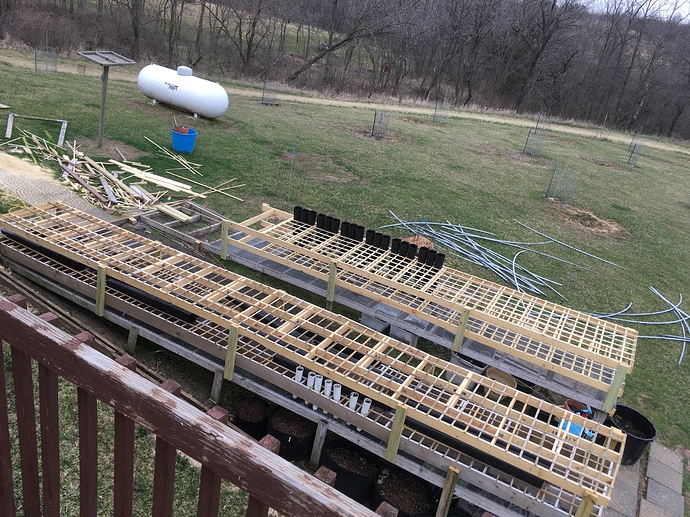 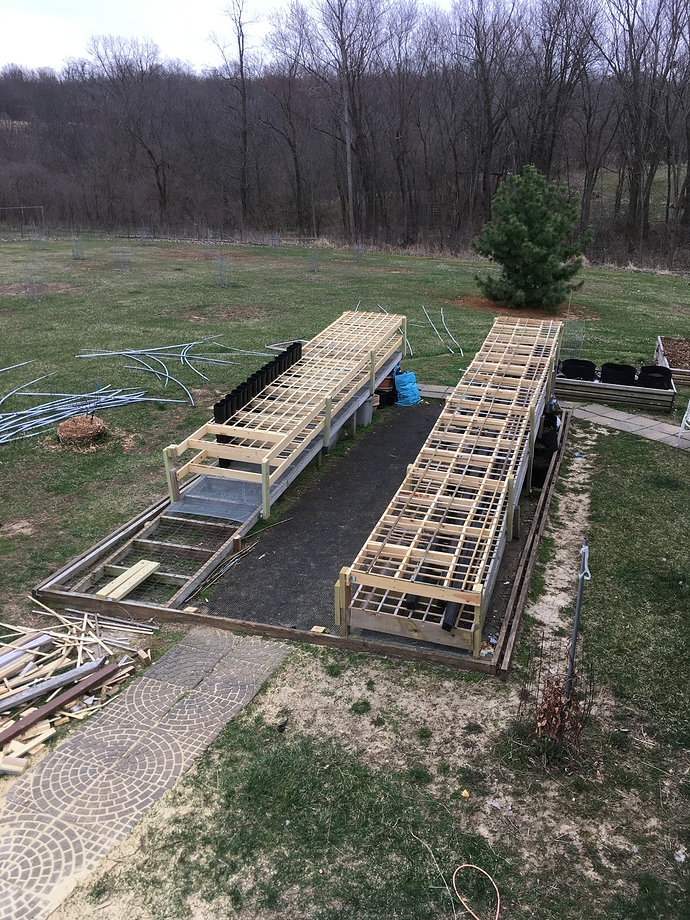 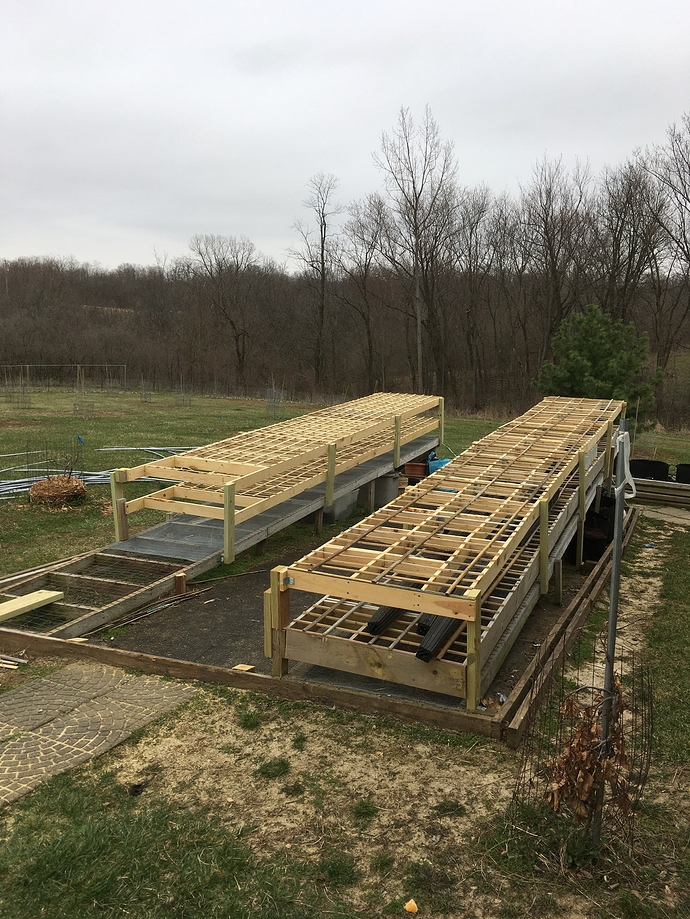 @Barkslip you are quite the machine!

Here is what I’ve put together. Overcomplicated it I’m sure. I wanted to make it so the coil wasn’t as likely to touch the grafts so I made a loose channel for the cable to sit in that is below where the grafts can get to. I don’t think it’s a fire hazard…

12 foot cable, 4X 3 foot 1" pipe insulation from Walmart, scrap plywood and more time than I should have spent and this is what I have. I should have taken a picture before putting the tube on, but you get the idea from the end before I taped it closed and cut the slots. I’m running it without anything in it now to test internal temps and make sure it doesn’t burst into flames. 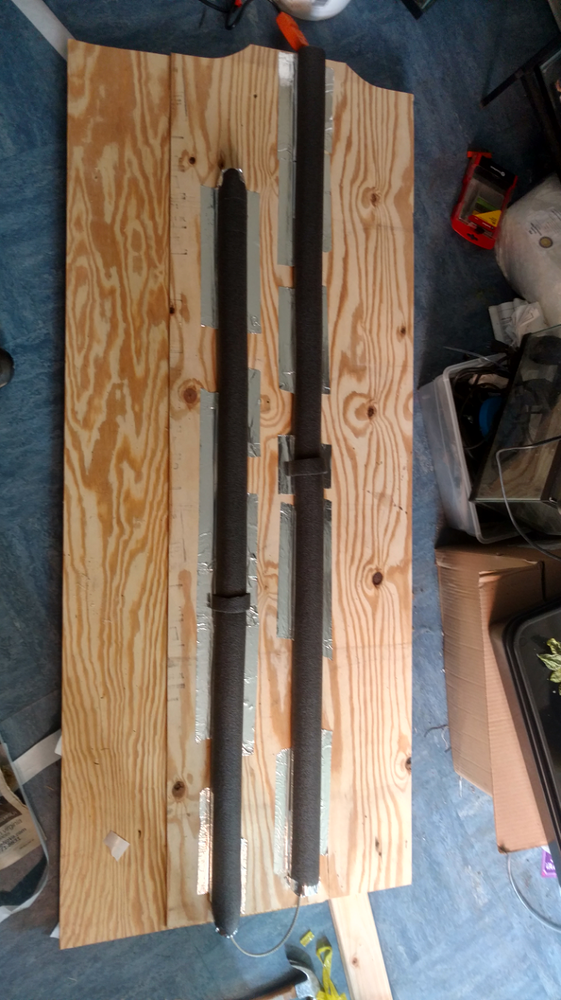 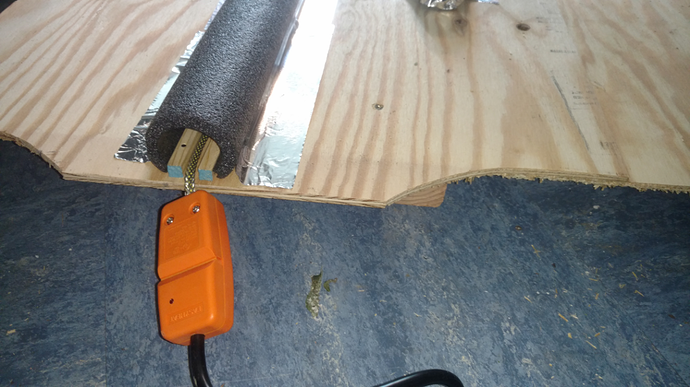 You need to prop that orange box both up and rigidly sturd, immediately. Find something.

Looks really neat-o. I can only a channel now in the last pic as I type. Really-cool! 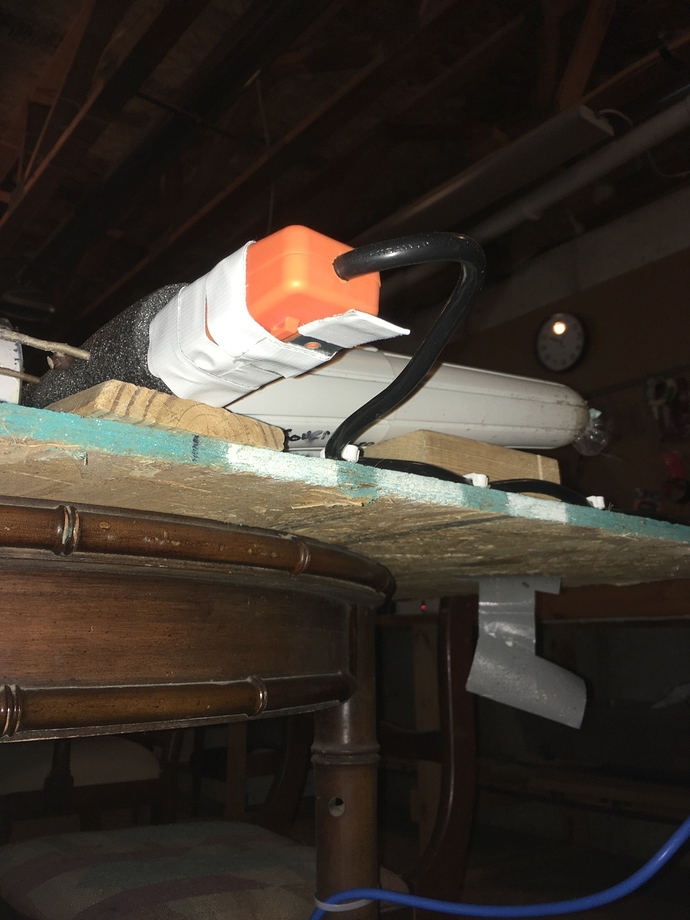 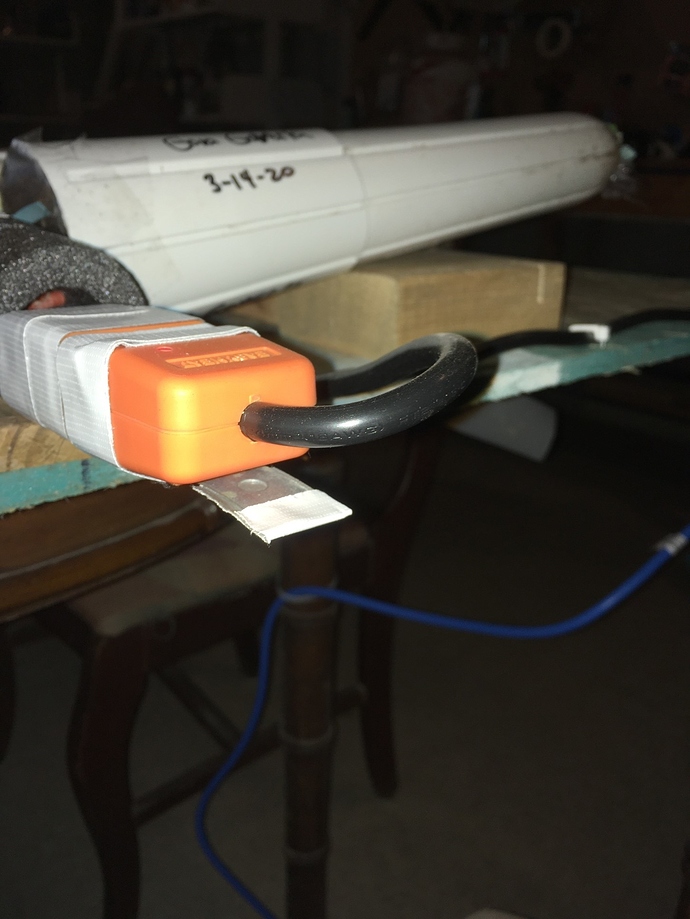 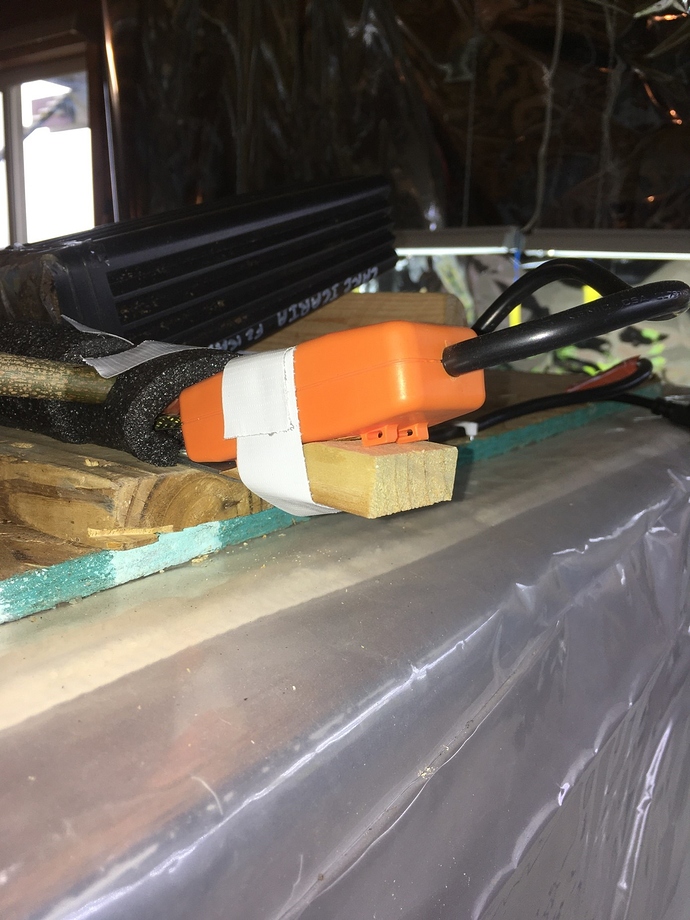 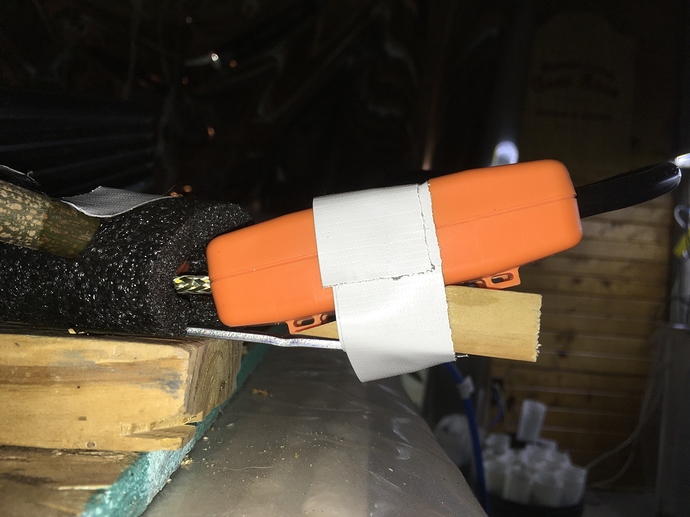 You need to prop that orange box both up and rigidly sturd, immediately.

Good suggestion. I screwed a piece of 2x in under the ply to rest it on. This look okay? 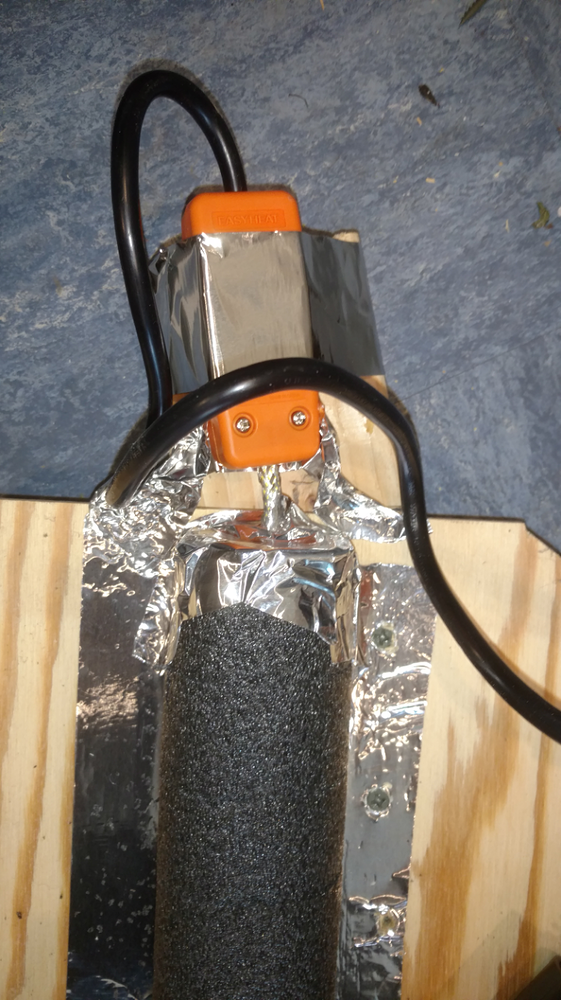 I’d now screw the 2 x 4 it’s resting on to the board/whole unit. You can use a furring strip shape (couple pieces or single) or one going under the wire the entire length of the joint/gap. Or, use metal brackets or something to rigid it up. You don’t want to bump it-allow the wire to power cord pull on it. Those wires in there (orange unit) when wiggled get loose, very-easily.

Got it. I’ve screwed the 2x4 into the whole contraption and put a shim under the box to raise it to the level of the pipe, then taped it in place. It won’t be going anywhere. Thanks.

One more questions. It is on my basement floor (around 67 degrees right now) and I’d like to keep it there where I can keep an eye on things. If it needs to be in a cooler ambient area I could put it in my crawl space (about 10 degrees cooler), but it is harder to monitor. Thoughts?

What are you grafting?

Mostly persimmons and a few pecans.

Also, roots wrapped in moist paper towels inside of plastic bags if that makes a difference.

Better move it then.

2-weeks pears, apples, (probably pawpaws as their wood is soft like butter to cut thru…) not persimmons and nuts, though.

Better move it then.

Got it. Thanks for all your help.
Walter

I love all the informative input in this thread. I will be building my own pipe this week. After a constructing and using your pipes, what size of insulation tubing does everyone prefer? I see that Dax likes the 2 inch outside diameter. What is the prefered inside diameter (the size of the pipe if we were using it as intended)?

Does anyone have any additional tips that I should keep in mind that you may not have mentioned up to this point? I wish I could offer something more constructive to the discussion. My good will and appreciation will have to suffice.

Since I made a slightly different version of the pipe than some others, I thought I’d follow up with a report on the temperature inside the pipe.

My original post with how I built it is here: Hot Callus Pipe DIY

The pipe is now in a crawl space that is averaging around 57 degrees. Inside the pipe, the temperature appears to be averaging about 20 degrees warmer. The hottest I’ve seen it was 79 and the lowest was 75. I also have the slits quite close and about 60 grafts along the pipe, so possibly just more heat is escaping. I’m not sure if this will be hot enough for the pecans, but I’m hoping it is at least hot enough for the persimmons. If anything I wish I had made sure the slits were all the way down to the square wood dowels I used around the cable, so I’d know the grafts were right above the cable. I guess I’ll know in about a month. 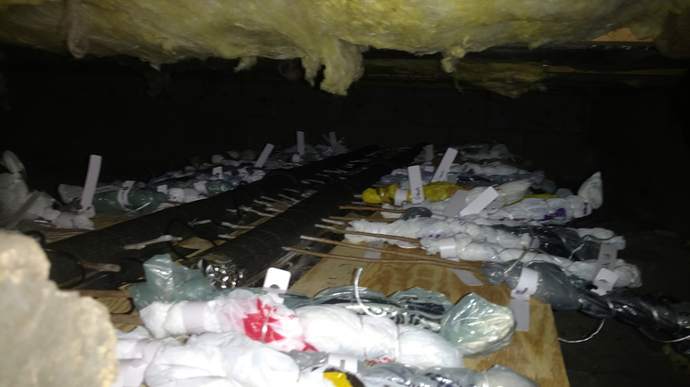