My friend was interested in buying some land and sent me this soil type…
Just curious, I’d wanted to ask on behalf of him how is this soil-type? Any good for fruit-trees/veggies? 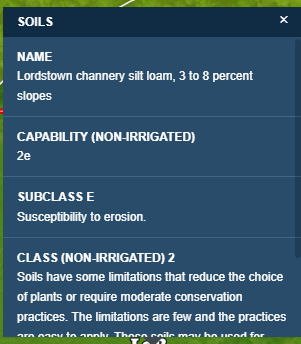 Also other half of the land is: 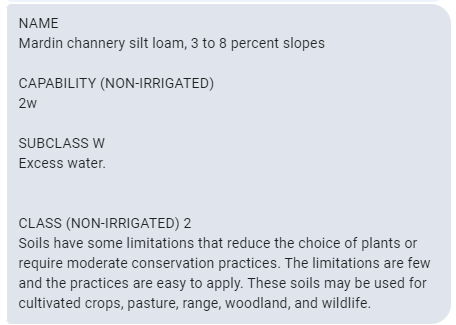 The excess water part is the most concerning for many fruit trees. Most soils that drain well are good for fruit trees. Wet soils are an issue particularly for things like stone fruit. Sometimes soil can by drained with field tile. In other cases there is no place for the water to drain to.

Silt loam soils themselves can be quite good, if drained well, but I agree with the concern about “excess water” at least on that side of the property

I’m on similar soils myself. They’re quite good for any sort of gardening/orcharding as they hold moisture and fertility very well. Seasonally high water levels can be managed by bedding and ditching without much trouble. As a silt-loam farmer, be prepared for mud, but compared to the droughty and low fertility sandy loams I grew up on they’re a much better choice.

It could be worse, this is the hole we are digging for a hops plant, what will basically be an in-ground pot of actual soil surrounded by a mad max wasteland. 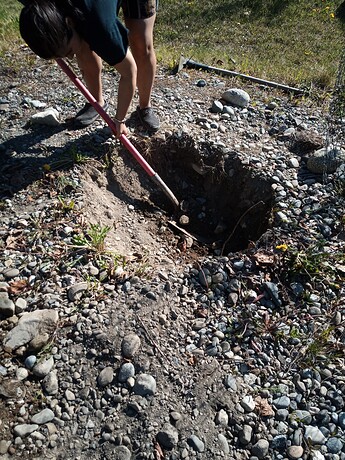 There is more to the soil than what’s on the paper. It has a gentle slope which is good. Putting a drainage ditch or two down the middle could do wonders for moving that excess water. If it can be moved to a holding pond even better. Heck a ground water fed pond about an acre in size can support populations of fish.

How big is the property? I agree with the general assessments here, but if it’s a small property (less than a couple acres), then the whole piece could easily be all of one or the other, rather than half and half. The soil survey data is good for large areas, but it breaks down if you try to make a distinction over small distances.

This PSA brought to you by…

The soil maps aren’t quite 100% for me. The different/heavier front yard soil doesn’t show up, but the two kinds in the back are pretty accurate (I have just over an acre). The front yard is silt loam (which also has a lot of clay) vs the loam in the back - but I found out from a neighbor that my entire front yard is fill dirt that was brought in to level it some 45 years ago.

Should be plenty accurate, then!

In other cases there is no place for the water to drain to.

I have grown very healthy peach trees on a site with standing water all year round, the trick that at least works sometimes is making the mound you plant them on high enough, at least on this particular site and several others I’ve made (where the mounds didn’t go nearly as high). Mounds were 5’tall and held into place by mulch- not walls. I used a similar method on a site with soil that was originally little more that blue potters clay but didn’t get the mounds quite high enough for peaches- they grew and bore, but never vigorously. All other species thrived- even cherries. I mixed the clay with vast amounts of sand and compost to create the mounds- in spite of the literature, I didn’t manage to create concrete. Lies the experts tell (just kidding, FN). However, the literature does guide people not to use sand to improve clay soils, but usually doesn’t add the caveat that enough sand will transform clay, and fruit trees don’t require all that much improved soil to be productive trees.

I would try higher planting beds there but it doesn’t fall within the tastes of the customer. We hold the beds in place with masonry blocks designed to look fairly natural.

Most research based literature comes as guidance for commercial growers who work within an entirely different equation than home growers who don’t have to worry about profit margins.

It seems to me this soil test is meant to guide those commercial farmers or at least the info was drawn from such guidelines.

Clay can be extremely tricky and often we can do more harm than good trying to “fix it”. A lot of the conventional wisdom is sound advice taking out of context and turned into dogma.

Clay holds nutrients like crazy and trees can not just survive but thrive on it. It can be a nightmare to water; amended soil can become a localized tub to drown trees in. Amended soil can also promote roots from never expanding beyond the amended zone, specially if the holes were dug in a way that the walls glazed the sides smooth and hard. Your mounds ignores the conventional dogma while addressing the actual problems. Heck you can probably build upon it by continuing to expand the mounds, making them wider over the years which would make the terrain uneven but maintain drainage on an over saturated soil.

On a slope you could bring it machinery to cut wide channels and amend the entire channel, creating both better soil and a path for water to drain.

Of course, so with clay so heavy no ordinary tree can survive you need create enough amended soil to sustain a mature tree- at least a square yard per tree, including the native soil. The blue potting clay site is now 20 years old and the trees are very vigorous and productive.

I am not speaking only from research but many years of dealing with poorly draining sites where I’ve never failed to get some success as far as productivity of trees and long life. Time and again. Where I’ve failed, the mounds were not properly maintained and allowed to erode, which has only happened once. I don’t know why the owner pays me so much money to maintain the trees in other ways but says he will deal with the drainage issue himself but never does. I would have lost many customers if I’d been discouraged by research suggesting amendment of heavy clay or wet bottom land is futile.

As far as being tricky, the main trick is determining the height of mounds you are going to need. Once the trees are planted and growing a couple of years you don’t want to have to come back and replant them on taller mounds.

The standard warning to avoid apples on clay never quite squared for me, since some of the best orchards I’ve seen are in the heaviest clay along Lake Champlain in Vermont. When I was there, nothing unusual appeared to be done at planting other than the standard sort of ditching and drainage done on any farm.

I don’t believe any tree can grow in the heaviest clay, and certainly not apple trees. I think we are talking about two different kinds of soil. Nurserymen sometimes will use some heavy clay at the base of wire baskets to help strengthen the balls and perhaps store extra water, but the roots do not go there, even after years. I’m talking about the stuff they make pottery out of- that is the “heaviest” clay in my book.

We are talking soil for plants, it is a whole different category and metric. The softest pottery clay you can think of would be impenetrable to trees, the hardest clay soil for plants would not work for pottery.

Established trees with long roots loooove clay. It can actually hold onto nutrients better than any other soil type. Add to that an ecosystem with plenty of nitrogen fixing plants deep into the soil and you can have a small garden of Eden.

Problems start when people dig a hole, fill it up with nice dirt, plant a tree, that ends up drowning and dies. That was not the fault of the soil but improper planting.

Also recently I came across a neat soil tool that makes it easy to find information about soils at any location in the US. I’ve used it to look at all the soils I’ve had orchards on in Illinois, Texas, and California. Type in your address and it will take you right there.
Use of UC Davis WebSoil app - Ourfigs.com

I’ve grown on clay, clay loam, loam, and loamy sand soils. They all worked because they were all well drained.

But the “heaviest” clay would pretty much have to fall in the category of poor drainage clays. I think Don is trying to emphasize that clay soils in general shouldn’t take a bad rap and can be productive, but we gardeners that use hand tools have another reason to dislike clay soils- their weight makes working with them harder and if you cultivate them when wet they tend to become cement- but they can stay very wet well into the growing season, so you shovel the heavy stuff into mounds to let it drain and become cement and then break it up again to convert it into usable soil. Personally, I will take sandy loam over that any time. High organic matter, mainly humus, creates most of the benefit of clay without the liability. Its water is almost all available to plants.

As far as fruit trees go- in my climate more clay soils hold more water and produce lower brix fruit. You aren’t looking to grow fruit in highly productive agricultural soils- that is where you produce you annual crops, if you happen to have options. If you cannot control the spigot- that is if water comes in quantity from rain during the ripening process, clay holds more of it and dilutes fruit sugars more based on my experience growing fruit trees in just about every soil type that exists in my region (not to be confused with genuine research, of course, but wine producers know what I’m talking about).

Bins per acre is another issue- commercial fruit tends to be mediocre.

To be clear I’m referring specifically to trees and the clay soils that they love. Me? You probably recall seeing pictures of my 60% rocks / 40% sand soil. I thank God I don’t have to deal with heavy clay soil.

Sadly most fruit trees do not possess the sort of tap roots that work best on clay. A few do, like mangoes. Heck check out these baby paw paw saplings: 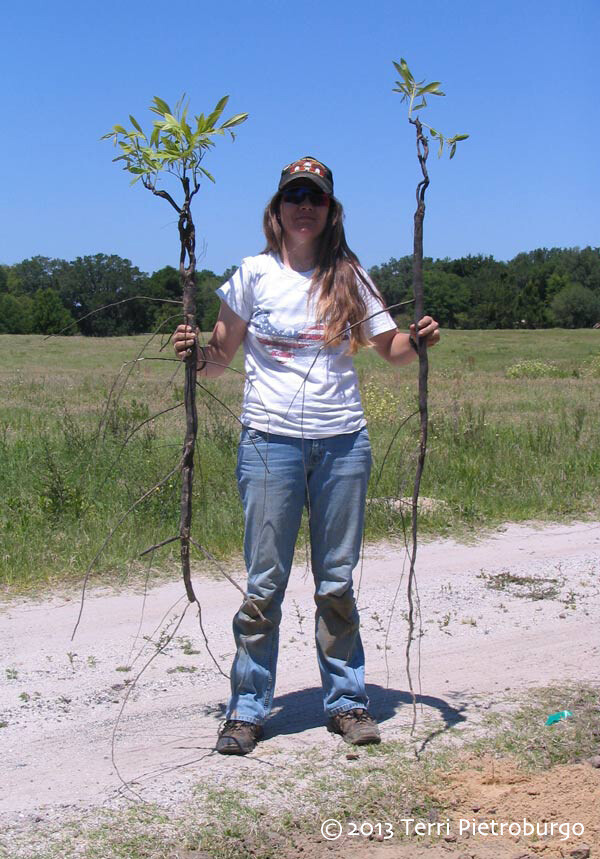 One reason, beyond firmer rootballs, nurseryfolks like clay soils, is that trees function with relatively much smaller root systems, allowing for more compact rootballs to go with the firmness. Roots have to extend further the sandier a soil is- deeper and wider. The fact that there is adequate oxygen much deeper down mostly explains why roots can grow there.

I’m not sure what you mean by tap roots, but if the definition is deep roots seeking water, as in a tap, sandy soils are the best type for trees to develop them.

@scottmartin49 … I agree. We have silty loam soil with pockets of heavier clay and areas with rock. Our main orchard is on a north facing slope which drains well but has wind exposure issues. Another small planting is in a protected and low area with more fertile(clay) soil. We have to be careful when irrigating this area as it is easy to overwater. We lost a Toka plum to “wet feet”. Still, we have 6 apples, 2 pears, a peach and a cherry tree that do well there.
These days, it seems near impossible to find the perfect spot of land/soil for growing. We have friends that bought property with poor soil profiles because that was the only affordable choice. With a few soil amendments, thoughtful tree choices and a little time they now have a sweet little property that produces fruit.