The 6z GFS moved that heavy band a little west…but yeah…its going to get wet up here when that tropical storms brings its payload north. After that though high pressure takes over and should set up for some nice quiet/cooler weather for a few days/week.

We got a nice round of showers, it was getting dry here, got to 88 before the rain started, got about a quarter inch.

Whelp, I was hoping that that quarter inch would be it, but no, we got another 1 1/4". The bean and corn patches are a bit mushy underfoot, hope that will be it. The upcoming heat ought to help get those seeds going, just hope that the other seeds didn’t get washed away. If it’s dry enough this weekend, we’ll plant out the seed potatoes.

I wouldn’t have minded a half inch, just enough to cut down on the pollen and loosen the soil a bit. But, it just started in again, and looks like it will be at it for a couple more hours at least. The forecast was for scattered showers today thru tomorrow. Maybe a quarter inch at the most, but if it keeps coming down the rate it is now, we’ll see 2.5" before it’s done. I should have mowed today before this hit, now I’ll have to wait a few days for it to dry out some. I freaking hate the weather here sometimes.

103 yesterday and 102 today. Very dry. Supposed to swing down to 82-83 tomorrow. Won’t get rain for a looooong time, but at least the melons are enjoying the dry heat!

Phoenix was 109F today… that is a little toasty.

91F here but dewpoints in the mid 50Fs so not as humid. Still hot.

0z GFS has a hurricane/tropical system hitting New Orleans…basically tracks straight up the Mississippi and ends up going right thru central WI… don’t usually get tropical systems coming up this way so this could be fun to watch play out… they usually curve east long before coming this far north.

Snow in the west… Rockies and parts of N California/Nevada

Temperatures will cool appreciably across the Northern Rockies
Saturday through Monday, with widespread rain and high elevation
snow developing. First, snow could become a hazard for those
traveling or recreating above 6000 feet Sunday night through Monday
morning. Even beyond snow accumulation, the lack of traction on
typically passable backcountry roadways, low visibility, and risk of
hypothermia in heavy, wet snow will be risks during this time. Take
time to consider how to endure winter weather conditions such as
these in your travel plans. Also, near-record cold daytime
temperatures may be present on Monday.

Some nice rain this morning! I need to get a rain gauge or weather station, but my “did it get wet under trees” yardstick makes me want to say between 1/4" and 1/2" in a nice gentle rain.

A Storm Surge Watch has been issued for the northern Gulf of Mexico
coast from Indian Pass to Arepika, Florida, and from Grand Isle,
Louisiana, to Ocean Springs, Mississippi, including Lake Borgne.

A Tropical Storm Watch has been issued for the northern Gulf of
Mexico coast from Intracoastal City Louisiana to the
Alabama/Florida border, including Lake Pontchartrain and Lake
Maurepas. 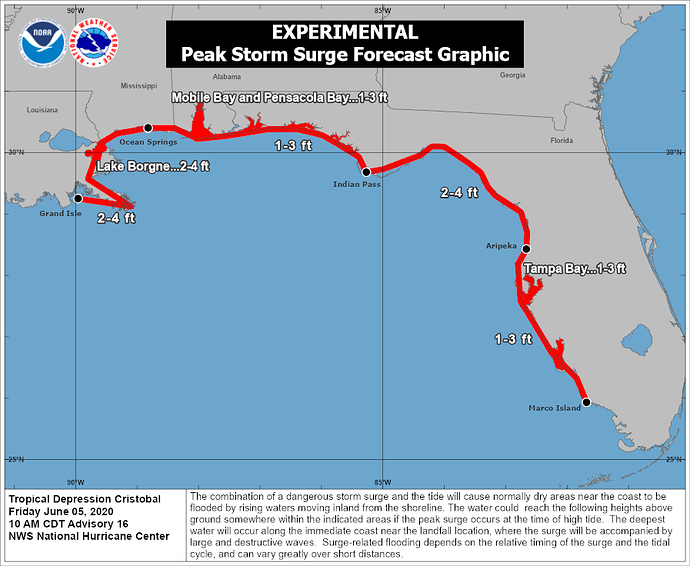 Half inch of rain fell overnight… hot and humid this morning…should cool some this weekend…dew points should really fall.

Next week looks all over the place… from tropical moisture (almost 2 inches of rain locally on model) to what should feel like October late in the week. GFS has 0C 850mb temps …that is very chilly for this time of year.

Not often do you see the storm track into Wisconsin 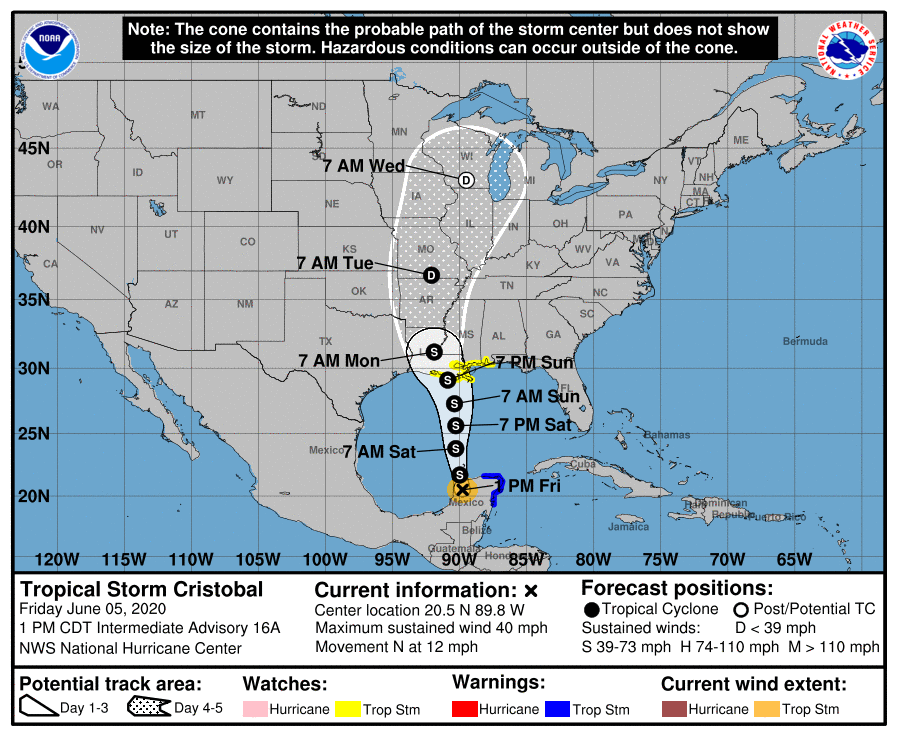 hope you guys need some rain. send it my way after .

Cristobal becomes one of the few tropical systems to strengthen over land (especially after 36 hr land interaction) Will move into the Gulf in the next 3 hours, Cristobal’s circulation is more robust than models were anticipating, perhaps a Hurricane Watch may be required for LA.

At least as of now…it would track northwest of you and pretty much die out as it gets to Maine…although the cold front that comes down behind this thing is pretty strong for mid June and that should have some rain along with it as it moves east…but that isn’t until late next week or more. 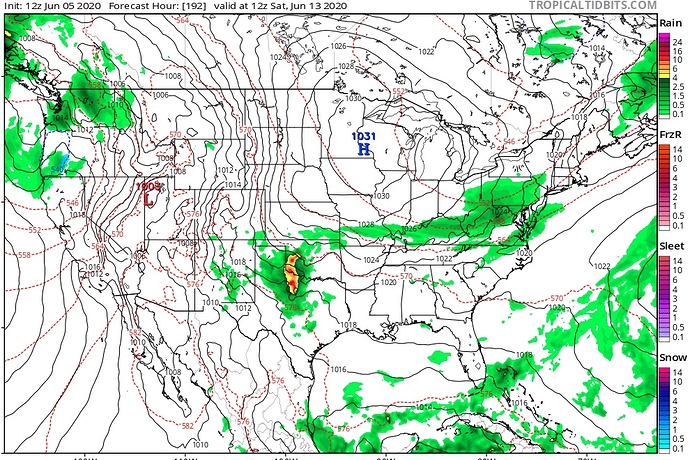 This is more telling maybe…temp anomalies are very nice… 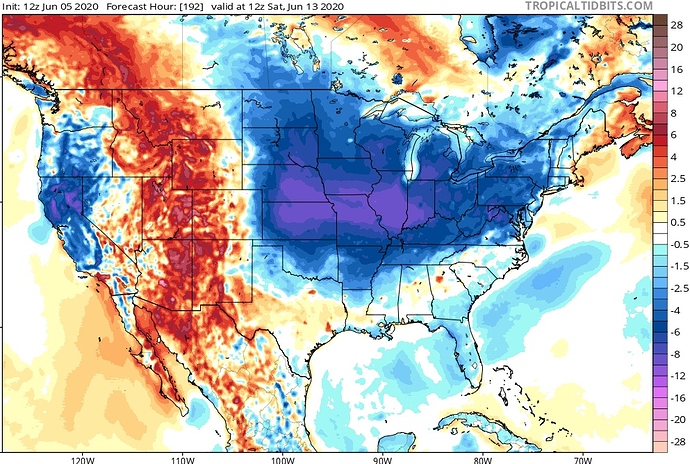 it can stay cool just give me some rain!

You could try doing one of those rain dances?

I’ve got toads everywhere. When i’m mowing they jump out of the thick grass and i have to move them. I hear them calling. I have a feeling my pond is going to be a nursery again. 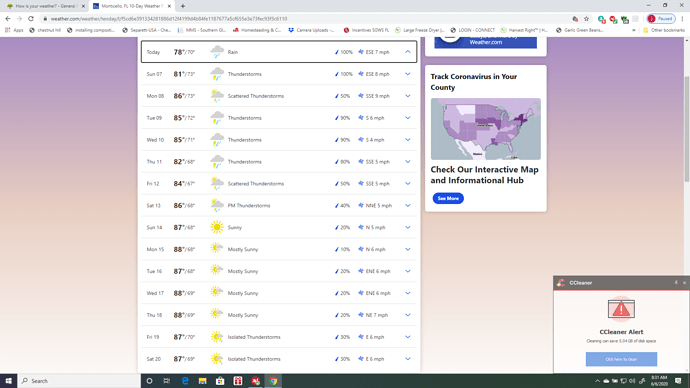 You’ll be under the Cristobal cloud bands for awhile. She/he has a lot of deep tropic moisture to bring up.

Still looks like it heads north into Missouri and then hangs a slight right over Iowa and into central Wi…ending up over the frigid waters of Lake Superior.

GFS has over 3 inches of rain falling next week. Might be some flooding.