The weather model doesn’t look quite as cold for the NE>…the cold doesn’t look to penetrate as far south as earlier runs. Should still feel very crisp.

First sunny day here since last Sat. That is the longest cloudy stretch in a long time. Nice dry stretch coming up here with plenty of sun.

The flooding from rain is going to be bad. The 12Z HWRF predicts 54 inches of rain in Mobile, AL despite having a much weaker storm.

We got over 4 inches of rain since last night. So much that part of our driveway got washed away. Looks like we’re going to need some gravel brought in. But, it’s been relatively dry here, so the ground’s not too squishy.

Since the ground is so wet, and was windy, one of my apple trees fell over. It was mostly dead, as it hadn’t leafed out the last couple years. It had some kind of root rot it looks like. That makes 3 apple trees I’ve lost this year.

Yup… rain can be worse then wind. Hopefully the heaviest falls over non populated areas.

Clear skies here but not. The smoke from out west must have made its way over because it is really hazy. Temps probably aren’t going to climb as much with this smoke in place. Gorgeous day overall…temp of 71F and a very light wind.

You have a tractor then to level the road? Too much rain, not enough rain… too cold/too hot…lol. We should all live in San Diego

You have a tractor then to level the road?

Well, yes I have a tractor, and it actually still has the grader blade still on it. But, our driveway isn’t flat at all, so we have drainage issues. I’ve dug some diversionary ditches, but new ones get started by heavy rains. Our driveway hasn’t had any gravel or creek rock put on it in about 2 years.

Oh, and our power went out this afternoon for a couple hours also, even tho it wasn’t storming anywhere close. My guess was that all the rain and wet soil caused some trees to tump over on some power lines. That makes 3 outages this summer.

Does your soil freeze in the winter then? That must sort of lock it up if it does? I think that is what happens around here, but then in spring everything gets soft and then you run into problems again.

I have a bunch of grape tomatoes and they all split from the recent rain…ugh …time to prune and compost.

It does get kinda cold (for me anyways), but I don’t think it lasts long enough to freeze the soil. But we do get a lot of rain in tbe winter and spring, so the ground seems to be perpetually soggy then.

The most notable change with overnight forecasts from NHC and model guidance is a shift east in the storm’s expected track. The threat to #NewOrleans is no longer quite as high as it was yesterday. The threat to places like #Biloxi #MSwx and #Mobile #ALwx has increased.

Room to plant new ones!

Oh yeah, and I still have 10 apples that in pots that I grafted so I have backups. Just hate losing a 4 year old tree like that, it was our tallest apple. It did bloom this year but the freeze got them all, and then it never leafed out.

I wasn’t sure. Soil up here freezes solid for months most years. The one winter there were city water pipes freezing 8 feet underground (they had to rip apart a road to get to them). I think that is why most logging is done up here in winter…can easily drive heavy equipment over solid ground. Having said that the freeze/thaw cycle eats roads (as do snowplows).

Mid 50Fs overnight…still smoke filled air. You could look at the sun yesterday afternoon and your retinas didn’t melt because the sky was so thick with smoke. Like the apocalypse.

Mobile, Al is under Hurricane Warning

Pensacola Beach apartments flooded on sound side (intracoastal side) due to surge. Ground floors, about 3 feet of water.

#UPDATE: #Sally will now be a Cat. 2 with 105 mph winds later today and Tuesday. There is a chance it could be even stronger (Cat. 3 starts at 111 mph). Landfall will be around midnight Wednesday along the MS Coast. #BeOn4 @WWLTV 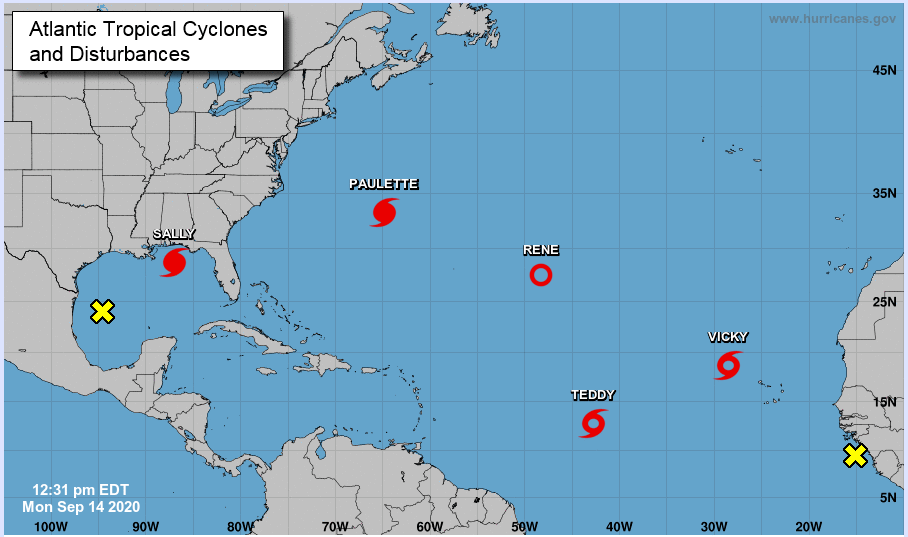 Yeah, lots of activity in the Atlantic basin…hopefully they’ll spin off and fizzle out…

For me, 2020 has been one of our wettest years in recent memory…we usually average about 50 inches per yr, so far YTD we’re at 62…Last year between October and the end of the year we got another 17 inches…crazy to think we could have nearly 80 inches of rain this year…

@warmwxrules I think water lines have to be at 24-30" deep here. Last winter was relatively mild, our coldest temps were about 10 degrees a couple nights. Last winter was colder, we had one night at 0. But, as far as snow’s concerned, we haven’t had hardly any in 5 years, last winter our biggest single snowfall was abt 3".

No smoke issues here, but we’re pretty far removed from the fires.

You’d think that extra cold timber would be murder on chainsaws. I know it doesn’t freeze, but it’s got to be more difficult to cut it. I have a 16in Stihl for clearing small timber falls and the like.

Bob, they use feller/ bunchers to commercially cut timber now . these things can level 100 acres in a couple days. they easily operate in the deepest snow here. google it and watch a video of one in action. crazy how efficient they are. logger only gets out to preform maintenance. all joystick controlled and heated / ac cab. theres no real work in logging anymore unless your doing your own property. even the mills are computerized and automated. unfortunately the trees can’t grow fast enough now to keep the wood monsters fed. i can show you thousands of 100+ acre clearcuts around here. very sad.

Do you know the rootstock of the failed trees?