How mad should I be at Stark Bros?

I purchased some barefoot apple and pear trees from Stark Bros and upon arrival, every single branch shows significant damage. This forum is full of people who know a helluva lot more than me so I’d like to ask, is this normal? Is it of no concern? Would you be giving Stark Bros a call? 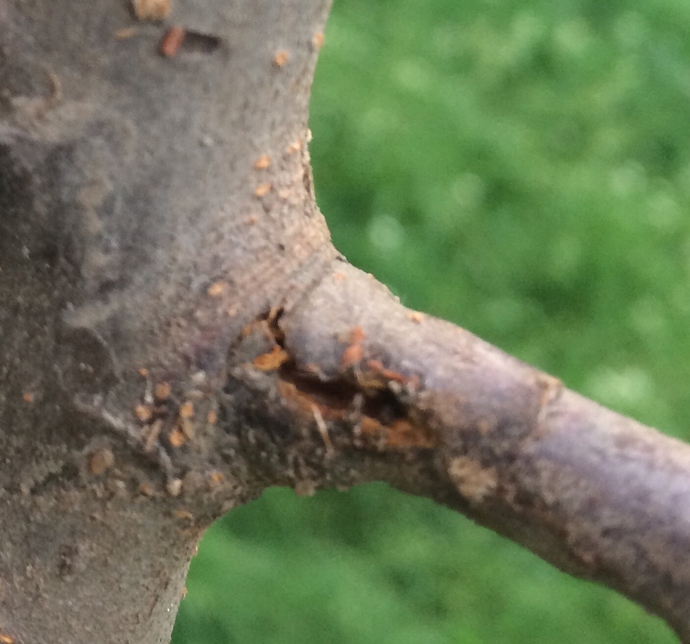 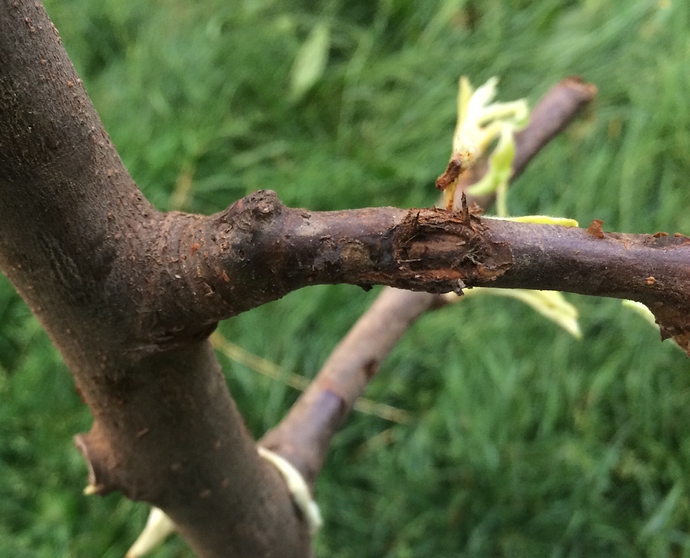 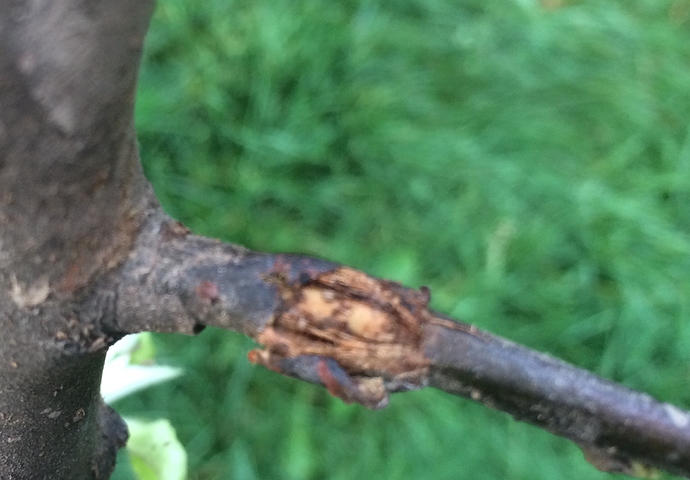 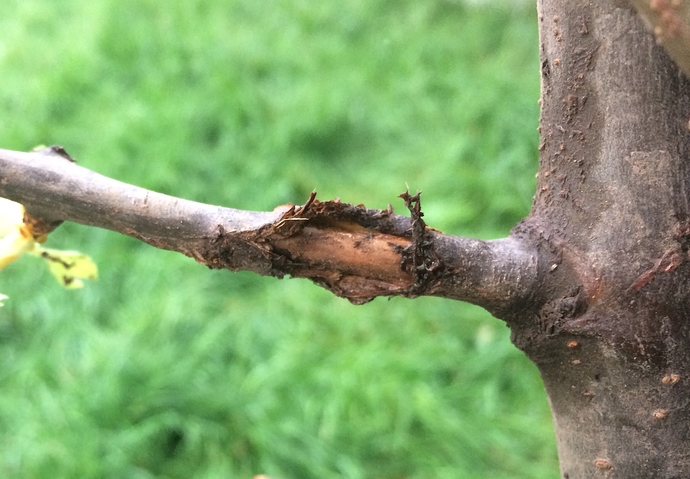 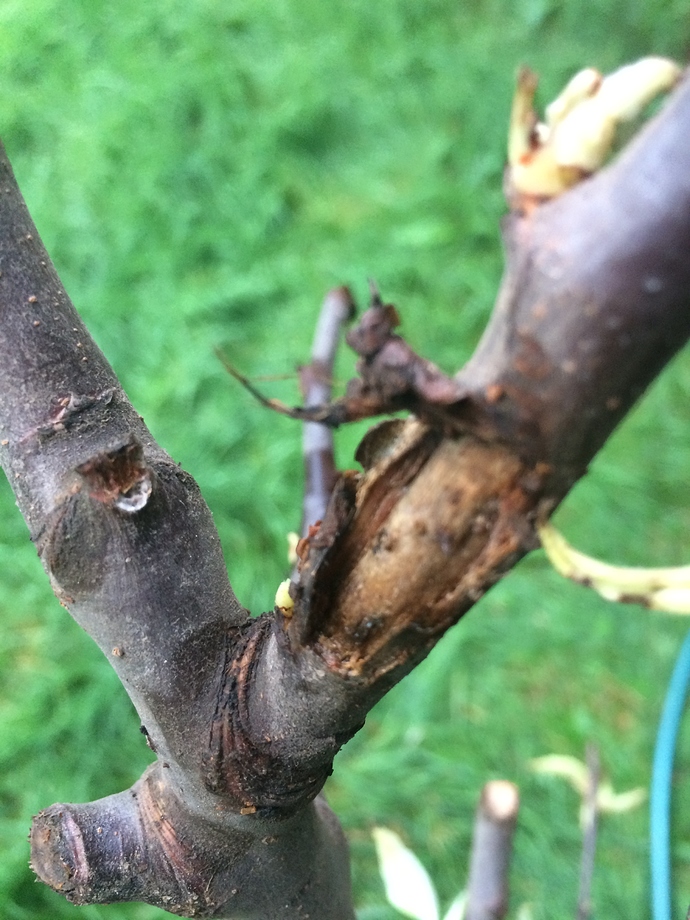 It never hurts to call, or better is to send an email with these photos and then call.

But realistically the trees will grow around this damage and in a year or two you will have a hard time finding where it was.

I would call them and let them know you are unhappy with the tree. I had a peach tree that didn’t wake up the first year and they refunded me 100% with no questions asked.

Also, I will not order from Start anymore. They have sent me the wrong variety of tree on two occasions.

Mad, no, disappointed and a little upset, sure. Damage happens to all bare root trees, regardless of who you get them from. The trees are harvested mechanically and broken branches happens. If I were you, I would call them or email the customer service reps and send the photos. Usually the branches that are broken are further out on the branch and they can be pruned back. In your case it appears they are very near the main stem. Perhaps they will work out a deal with you.

The tree will probably be fine, but it never hurts to voice your displeasure with the situation, especially when you have photos.

That damage does not look like it occurred during shipping which means they shipped it that way.

The tree should have never passed the grading process for first quality retail sales!

I have purchased over 1000 bare root trees including some from Stark and I never received a single tree with as much damage as the tree shown in the picture.

i have to agree with blueberry - to me, that is a shocking amount of damage close to the trunk. no way I would personally be ok with that.
A little bump here or there, but that looks like a mauling in my opinion.

I had hoped to be a loyal customer of Starks, but after receiving a number of DOA trees and plants from them and DOA replacements I am losing faith and trust in them.

Stark is just a middle man and do not even know what rootstocks they are sending. For this reason alone i will not order from them. The trees they are sending are bought from a supplier and that is what they are getting. I would be very displeased and would contact them.

I agree damage is bad. I got a tree from Grandpa’s this year. It was a nectarine and it felt so light! I was worried. It looked good though. Postage was outrageous, but I know becasue the are small they don’t have a special deal for cheaper postage. I think the postage was more. It is in my own state and I thought about driving. But that would cost more than postage. It’s quite far from me, hundreds of miles.
Here is is when it arrived 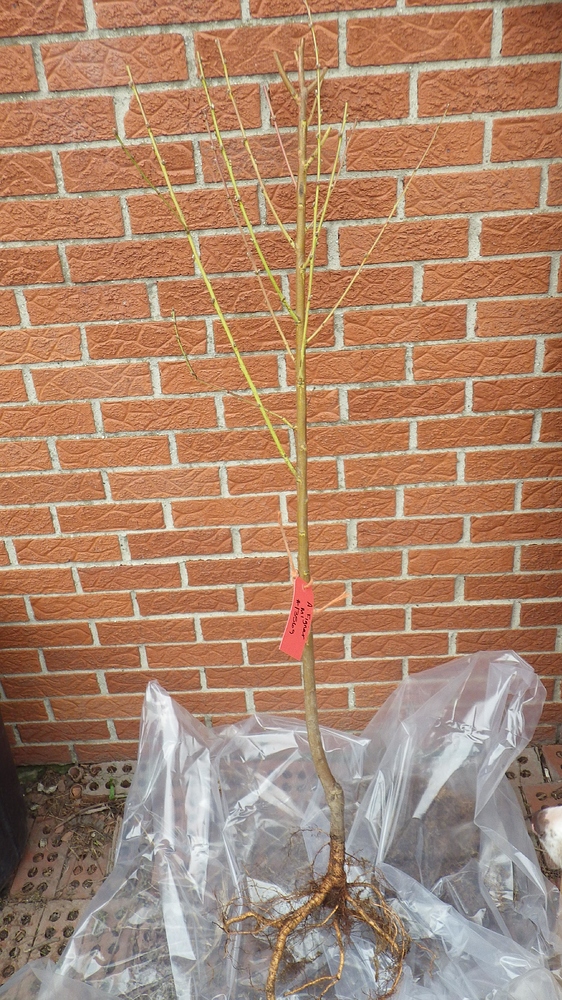 Grandpa’s is owned by the same company that owns a wholesale nursery and they supply Grandpa’s. This is a Dave Wilson nectarine that was grown here in Michigan. I forgot the name of the wholesale nursery? They have supplied Adams at times too. Last time I talked about this Opea didn’t think they ever supplied Adams, but was doing business with them and asked, and they yes yes indeed they do. Anyway so this is a local Mid West Product, and you may pay more, but I like to support the small businessman. It’s Dave Wilson or even as large as Adams, still a family type business. I don’t mind paying 20 bucks extra for a good product, if you order multiple trees the postage is decent.

I topped it a little and directed branches and planted out. It’s growing fine. A little rough after yesterday’s 50MPH winds. 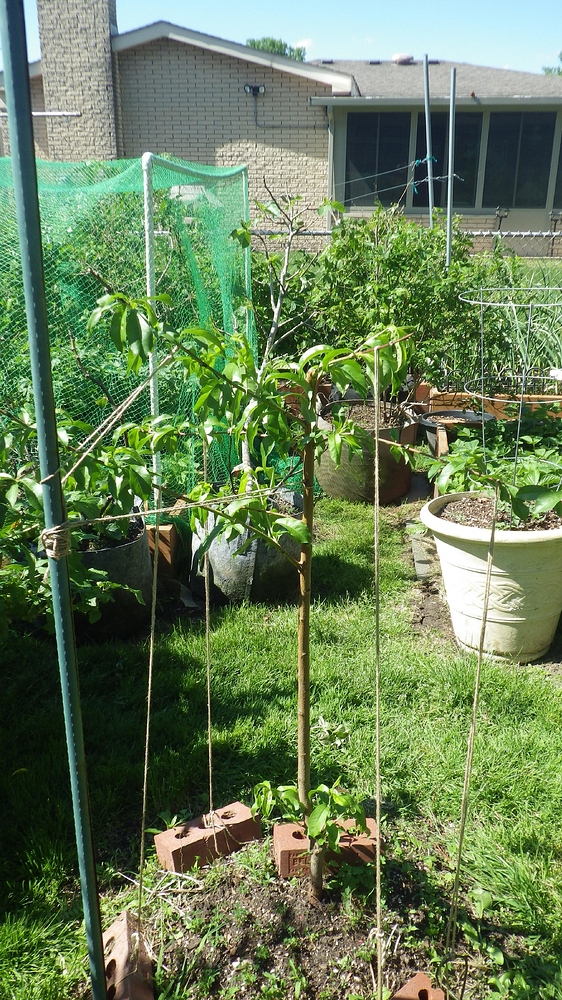 it is mosers i believe.

Yes that’s it! And Grandpa’s has first pick.

Stark Brothers are known for low quality trees. But in the same time they replace them without a question, without even you asking them for it. I have an apricot from them that had some wound on the trunk and next spring didn’t want to wake up… So I sent them an email, if I should wait more or it didn’t survive. They never responded to email. But sent me a surprise replacement… So send them email with pictures. See what they say, if they will. You may end up with two trees for the price of one. This is happened to me, when my first apricot finally woke up. Replacement, by the way, died 2 years later

I echo most sentiments on that apple tree from Stark Bros. It’s one thing to have a damaged branches near the tips but that damage is ridiculous…deep gashes and many near the trunk. Nope…I would not accept that one.

Stark Brothers has a wonderful history starting over 200 years ago including locating the original Red Delicious and Golden Delicious varieties and selling them all over the country. They have had a huge impact on Apple growing but it looks like their business may be in a decline just like those varieties.

Correct on the history - I was just reading The Garden Of Invention about Luther Burbank, which mentions Stark Bro’s a bit.

I am disapointed with most bareroot trees from most nurseries. Especially the roots. Too often most nurseries heavily prune the roots and a 4’ tree has a small root left after pruning and almost needs to be re-rooted with special care. It is especially damaging with persimmons. I doubt I will order any more bare root persimmon, I have 2 right now in my garden from a very respected nursery that I am pampering in every way and they are sitting there having a hard time taking off, the root damage is disapointing, and one of them had a old string tied around the graft when I recieved it that had cut way deep with almost-fatal damage, I had to carefully operate and dig the string out to save the tree, these large bareroot trees have a very marked difference from the small potted tree next to them… I am going to grafting my own stuff, my favorite method is my own potted seedlings that I plant in burried 3 gal pots in my garden along my drip irrigation.
I don’t want to be too hard on these nursery guys, but If I were them I would strongly consider only growing small and medium potted trees to keep a good name, those have the best life and vigor after planting.

when other companies buy up the names of old reliable companies…they hope to make money off the name, not off their good prices or good service…it’s true for most of the old names / modern owners.

They should never have shipped that tree. I have some misses with Stark Bros and they have always made right when I called, no hassle.

Yet with potted trees, you have to worry about them being severely root bound.

In an ideal world, we could get quality trees grown in air pruning pots like a Rootmaker or Smart pot.

However, they are expensive, and since the vast majority of people don’t care or want to buy those kind of trees, they’re simply not worth it for most nurseries (although I believe they’re fairly common at the liner production level for landscape plants).

So I usually go with bare-root, because at least that I can see what I’m getting, and not feel obligated to remove 80% of the root system to get rid of all of the J-roots and circling roots

Every tree and vine I purchased from them died. 2nd year this has happened. All trees and berries from 2 separate nurseries that shipped to me 100% survival 120 plants in total. Not sure what’s happening with Stark but something seems off