How to start off espalier training for my trees

I have 2 Asian pear trees, how should I go about starting espalier training the trees? Should I head back the central leader? But where should I make the cut? And what about the existing branches on the first tree, only 1 branch seems to get longer, the others have been that short or growing very slow for the past 2-3 months. 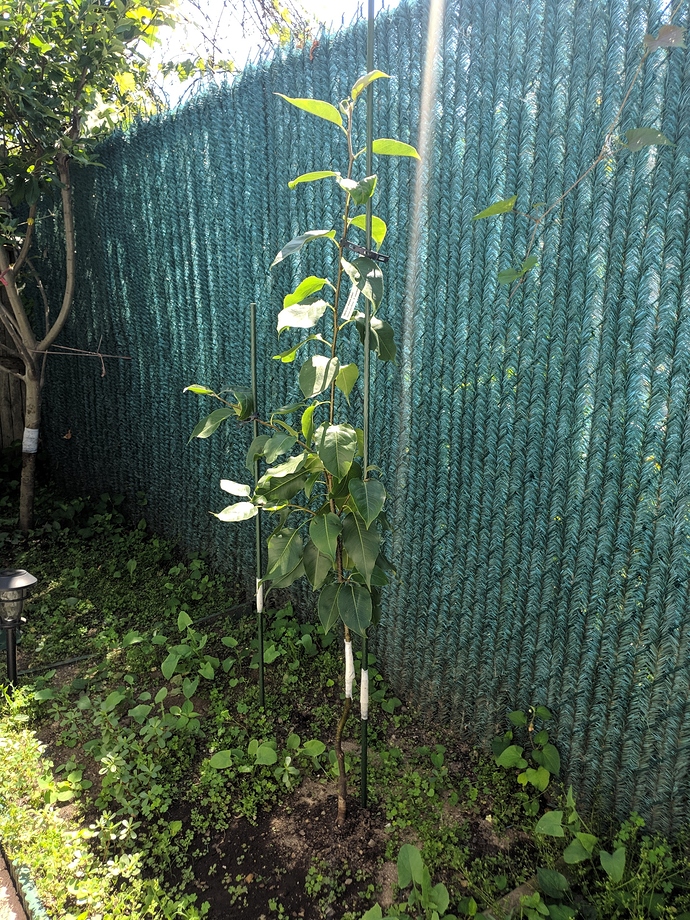 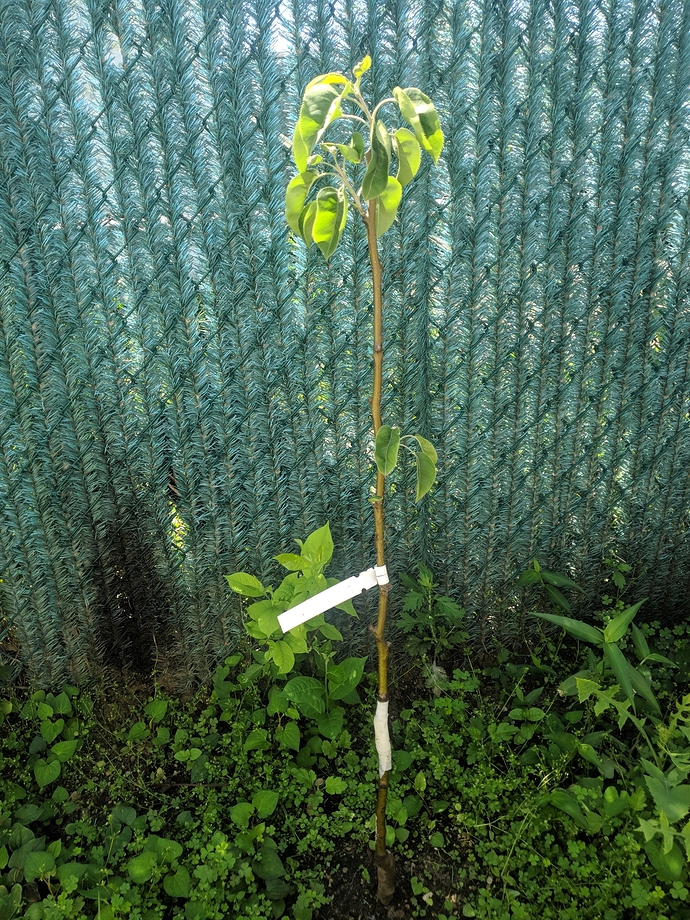 It’s a little hard for me to tell from the photo, do you plan to secure the branches to the fence behind? What shape have you decided on? The first cut is made above where you want your first level to be, preferably with buds underneath. I typically do that cut in the spring and then train each level throughout the growing season. You want to secure the growing shoots before the harden off.

I’ll be securing the branches to t-post and wires away from the fence. I haven’t decided but it will be either cordon or candelabra.

When you say to make the cut above the bud where u want my first tier, are where leaves are coming out a “bud” as circled in the photo below?

Is it only 1 tier per growing season or it may be possible for 2 or more tiers each season? 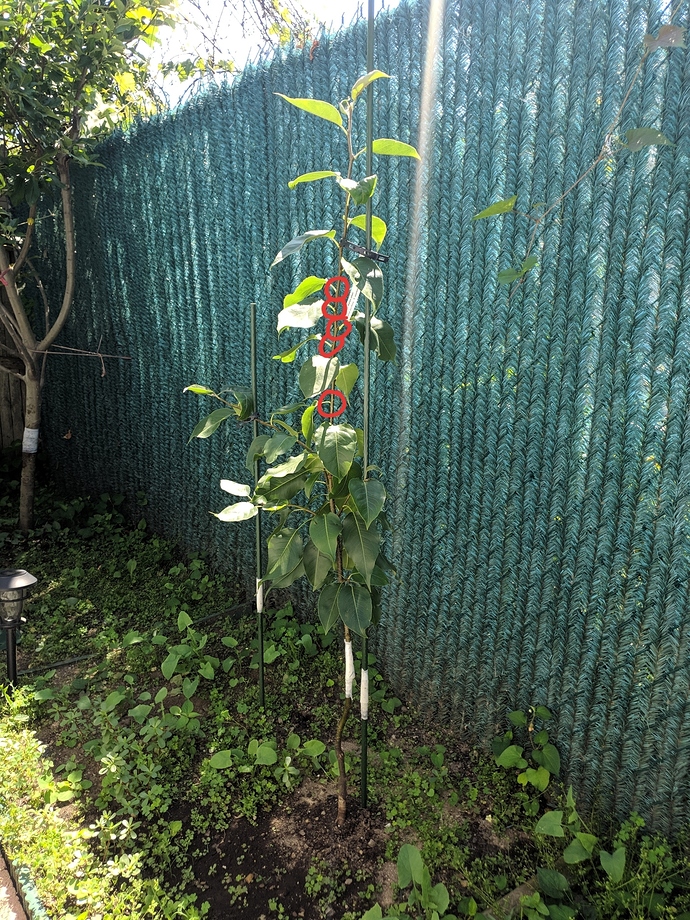 Given that it’s August now, I would suggest that you let the tree be for this year and then cut it back at the end of the winter/very early spring (while the tree is still dormant, but after the point where it’s likely to be exposed to severe cold).

You would want to cut it back slightly BELOW the level of the lowest tier on the espalier, so that when the new branches start to grow you can more easily train them to the level you want them at. (So if you want the first tier at 24", you might make the cut at about 21".) If you happen to have a nice handy branch forming at that level already, terrific.

In general, you would be looking to form one tier per growing season.

For this first tree, would I cut at the red mark (there’s a bud in the backside that isn’t shown on photo) so the topmost bud will grow as the central, and the bottom 2 circled on white would branch out? 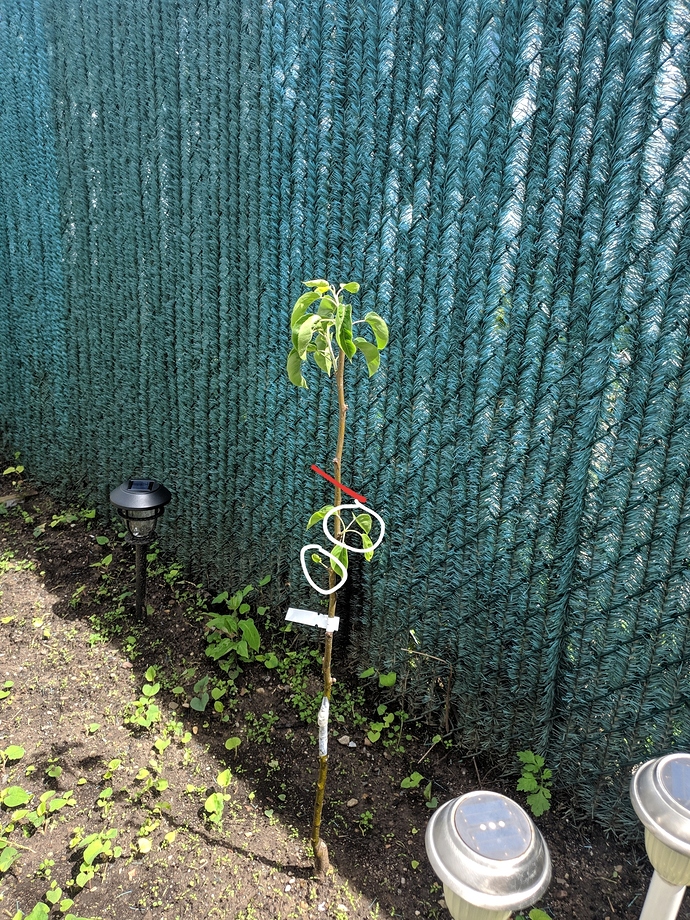 And for this tree, there’s already existing branches and a leader, so I should snip off all other branches and leave those 3 circled in white? But the left side branch is already super long, how could I get the right side branch to grow? 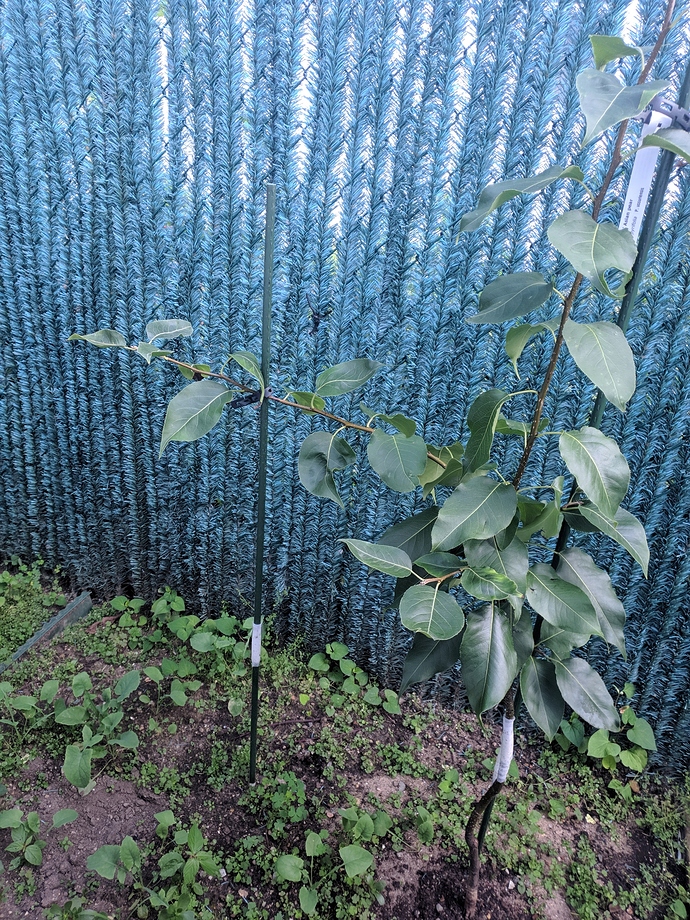 If I prune back a whole branch, will it grow back?

If I snip off the branch circled in white and head the tree right above that bud, would that work as well?

One tier is the goal, but a vigorous tree might get you two.

Doesn’t look like there’s any buds on the growing central leader. Do buds develop the second year? 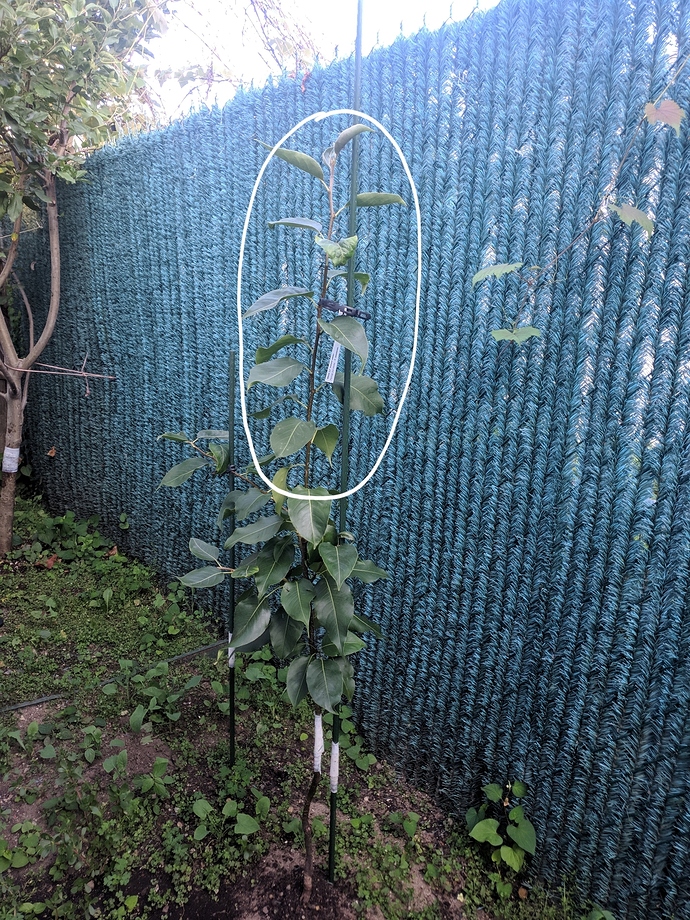 Sorry everyone for the non stop questions, I am a 100% newbie at this. I just don’t want to do the wrong cuts

It won’t matter because you will have cut the leader off. New shoots will emerge from below your cut and if you are doing cordon you will pick three, the right and left lateral and the new central leader.
The reason you can typically only do one tier a growing season is that horizontal branches are not as vigorous as vertical and in my experience it takes pretty much the growing season to get your laterals fully formed. Good luck, don’t stress too much about the perfect cuts. Depending on vigor I typically have plenty of new shoots to choose from if I don’t like one I previously selected. 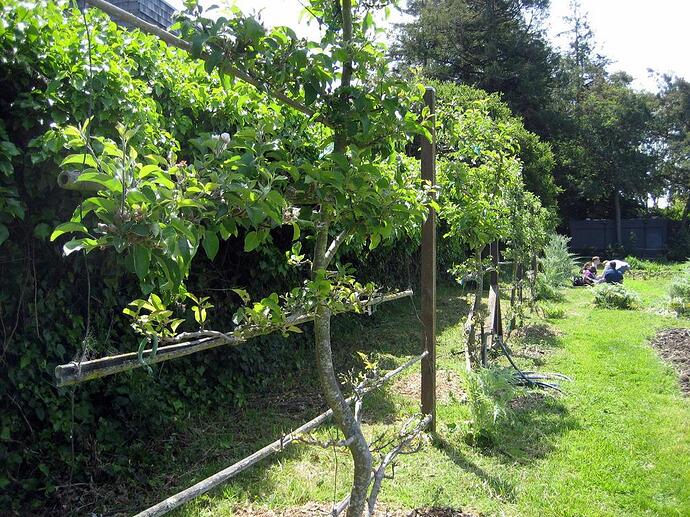 But I was thinking if I could keep the central leader because there are 2 side branches right below that may work as the left and right laterals. The current central itself looks to be a central leader that emerged after the seller headed the height before shipping. So I was going to head the top to the next level, would that work? but there are no buds, just leaves.

That’s a good question. I am not an expert, but my guess is that if you did not cut back the leader, the two side branches just below the circle might not grow as strongly as you would want them to grow to fill out the bottom tier of the espalier. Or to put it the other way around, cutting back the leader will encourage stronger growth in those side branches (and a new bud will form to grow up into the leader to the next tier).

But again, I would cut it back at the end of the winter when the tree is dormant, not now (though there are other parts of espalier pruning that you would do during the growing season).

@Sheri
Every leaf has a bud at the base, which with encouragement,
Can grow to form a branch.
Cutting above such a bud will usually force it to grow.
As will making a notch above it down to the wood.
So by heading cuts, notching, removing or pinching back unwanted growth you should be able to shape the tree the way you want.
May be late in the season to start this process this year.
It’s good to have a vision of what you want, don’t let it grow (pinch ) where you don’t want it to…
Encourage it to grow ( notching above bud / shoot ) where you want growth.
Good luck