How to train Ribes to grow upright

dont know if its something only i have to deal with or other do to but. many of my Ribes prefer to lay thier branches on the ground here. occasionally ill get a very upright growing one but about 2/3rds of them will have 90% of their branches grow on or near the ground. ive tried pruning out the culprits but they grow back most the time the same way. even had a tiben b. currant literally split in half with most of its branches laying on the ground. its a real pain to pick these plants… i prune every spring trying to get them to grow upright but just wind up losing some production. even some of the branches grow in weird curls for no apparent reason. my worst ones for laying on the ground are a red perfection currant, jeanne gooseberry, crandall clove and some times tiben. b. currant. im sure our heavy snow doesnt help with their form over winter either. but this doesnt happen with my other bush fruits.

I let most of mine just flop around. Couple of mine I tied up. Picked up all the branches and ran a string around them till they pointed straight up. Tie it up now while they flex and let it go through the winter. Check in spring. Should stay in place. Prune out anybody not playing ball.

As a side note. I have Black Velvet and it grows more like a tree as opposed to all the others I have (low bush).

Maybe build a small trellis for each plant to grow on. I’m planning on doing this for my Jeannes and laying them against the house. They are currently 2nd leaf so not big enough yet.

Unless mine was miss labled my black velvet so far is sprawling across the ground. I planted it last spring as a tissue culture and its only put on a out a foot of growth so far. It was my first gooseberry to wake up this season. Maybe it will change its mind once it pushes more new growth.

Unless mine was miss labled my black velvet so far is sprawling across the ground.

My Black Velvet TC did this initially, too. First year, grew little, and what little new growth it put out would lie on ground. Second year it put out several big upright canes. Hopefully more this year.

I’ve had the issue with Red Lake (red) currant, but not the blacks.

Some of my floppies get a tomato cage cut to proper height, or peony ring. I haven’t seen gooseberries yet, they might need this.

My Hinnonmaki Red went years without growing any wood that didn’t seem spindly and contorted. It was barely 12 inches from crown to tip for almost 5 years. I planted it with another gooseberry and it seems to have learned to push better growth from its ‘friend’ over the past couple years… 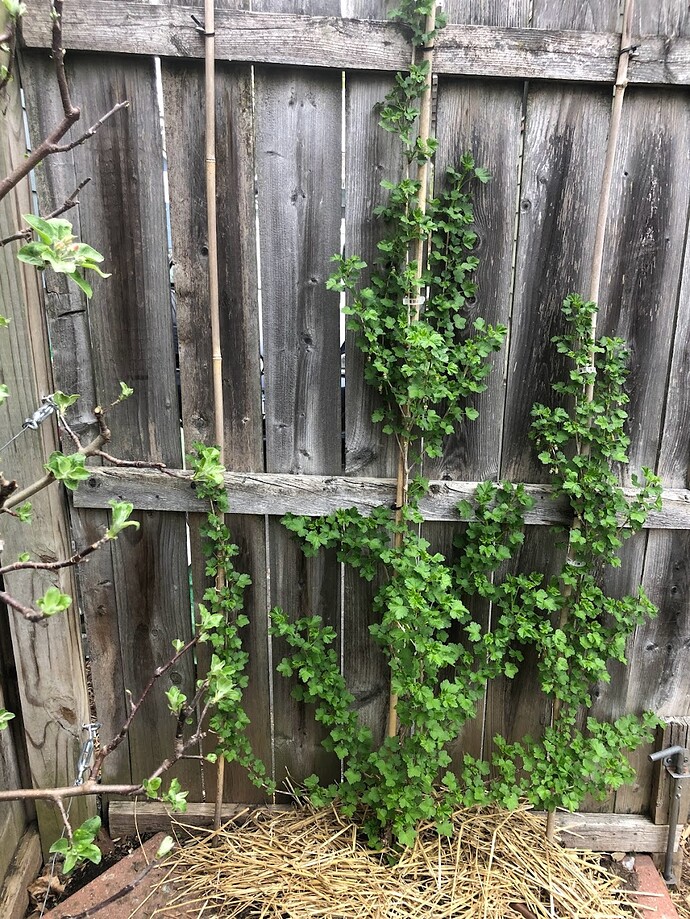 Black Velvet that I’m training as a triple cordon. The left arm is a little more shaded, but so far it’s working well.

Yes growing cordons is a way to keep them upright. I don’t mind if they grow low, but I do grow some by making cordons.
I always thought Lee Reich’s Rovada cordon was awesome. I removed one of my cordons and planted a rovada. It’s taken some time and I’m still growing the cordon part. But this is my 3rd cordon I started.
Here’s Lee’s Rovada cordon 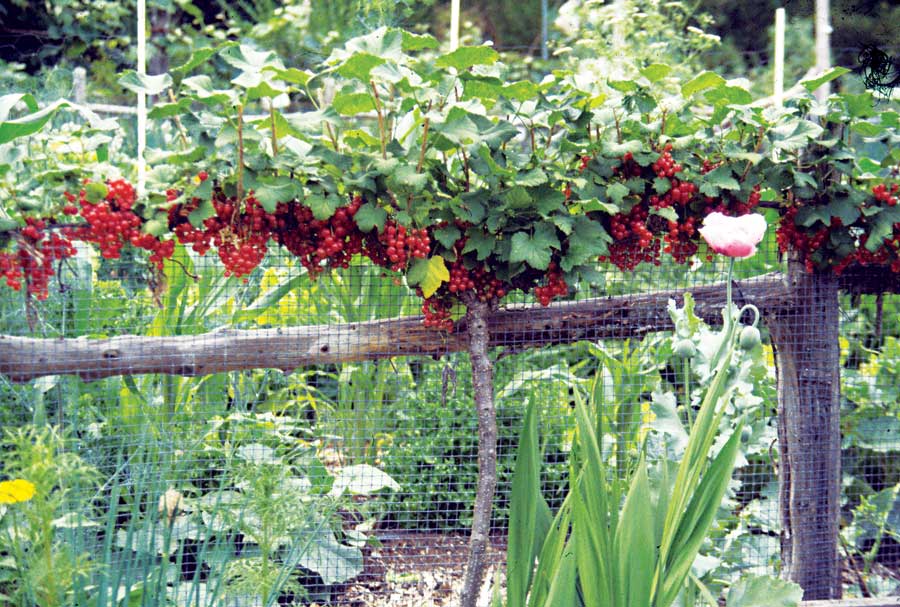 The other I want to restart is with Primus White. It has long strings of berries and it’s going to look awesome 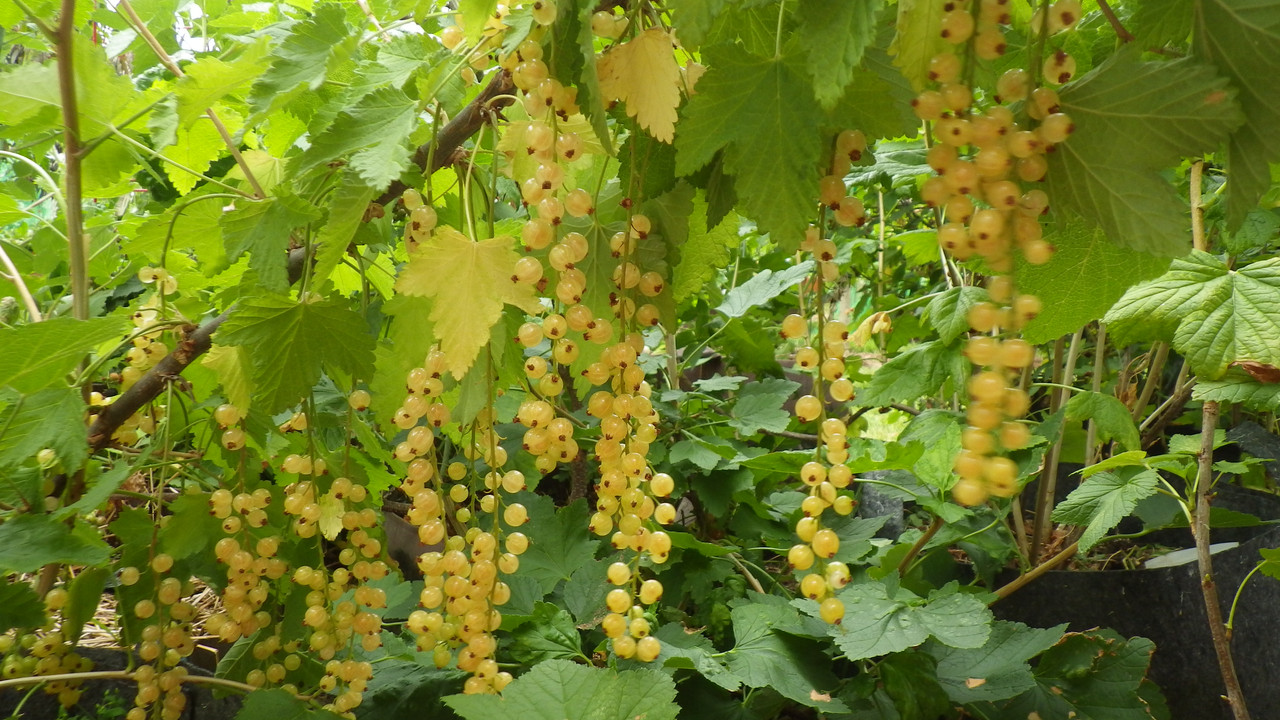 was thinking of making a 12in wide, 6in.high collar made of 2’’ x 4’’ mesh wire fence to put around the base to at least keep most of them off the ground. was worried about the branches getting damaged rubbing on the fencing. maybe cut a old hose to cover the top wire?

That makes sense! It can’t hurt anything. The one I got going is growing straight up. I cut off all other branches to form the trunk. Branches on the trunk I cut down to a few nodes. To let them fruit while growing the trunk. But eventually will remove them completely.

In England with gooseberries they graft them into a long rootstock to keep them off the ground. Another method is a three trunk cordon. I don’t know much about either method? I guess cordons are a lot like how you prune grapes. You have a permanent structure and laterals off that I trimmed back to two or three nodes or even one node. Easy to prune easy to harvest. Shape or size can be varied. I guess only limited by your imagination.

I have just done the dumb thing of strapping the growth I want to keep to a trellis in the shape of what I want it to look like while cutting off the growth I don’t want. With just one upright stake you could get pretty far.

I cut off extra stuff growing up from the ground and cut off new sprouts on the main vertical “trunk”.

Johnkeer v. Tets red currant (left arm was broken off by ice last winter #*(&$@). The top won’t grow more in order to bend right onto the upper wire, but maybe it will grow more this year since it was accidentally pruned heavily. The top bare vine is from a grape off the left. 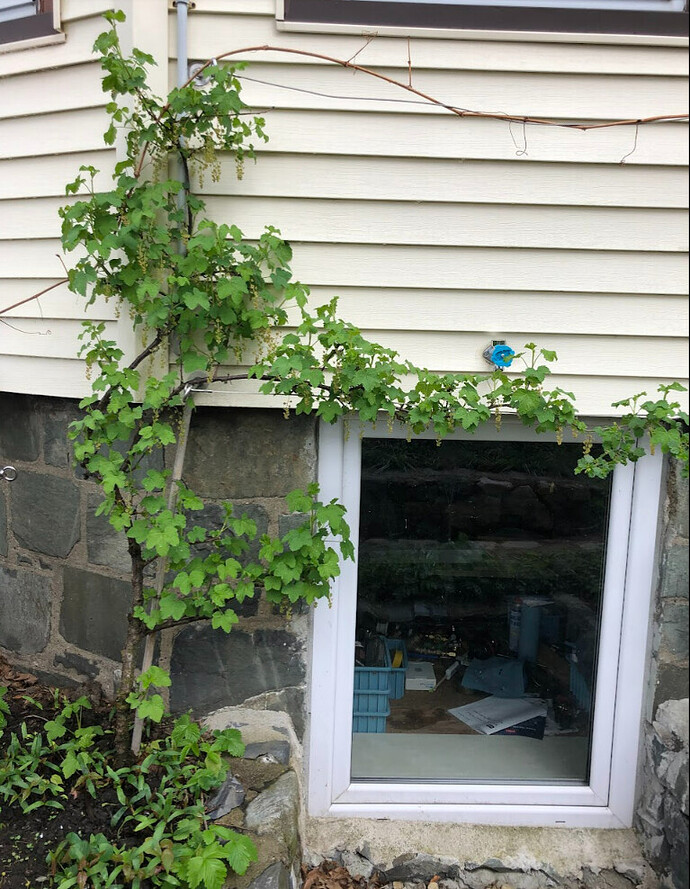 This is Hinnomaki Red. It also doesn’t want to grow a lot more so I have not been able to get it to go onto the wires that much. Working with this one is a pain because the thorns are terrible. But I like the fruit and it puts off a decent amount every year. 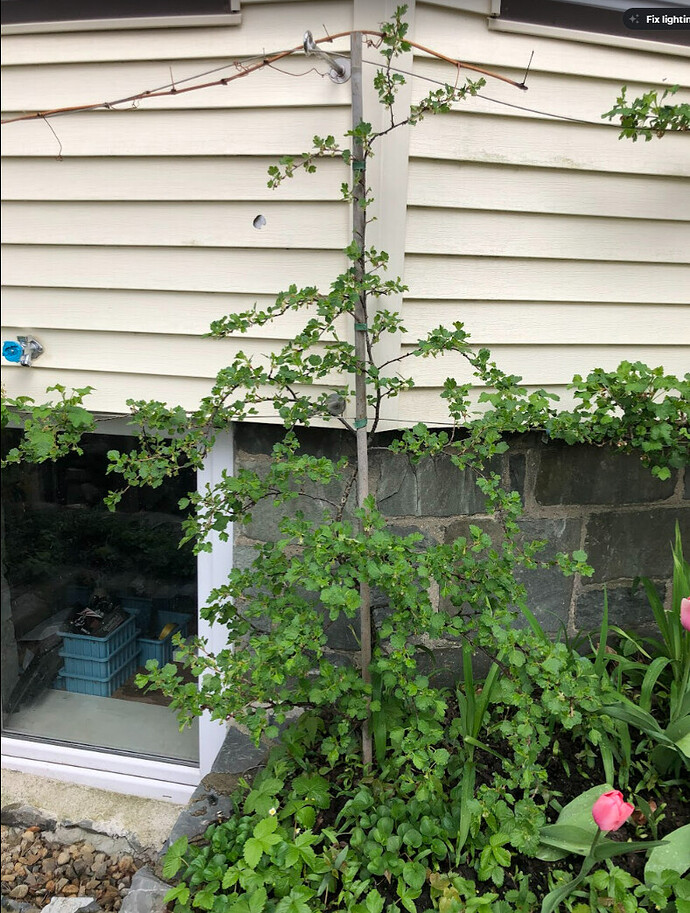 This is a jostaberry. It has been the nicest to train because it has more growth to shape. 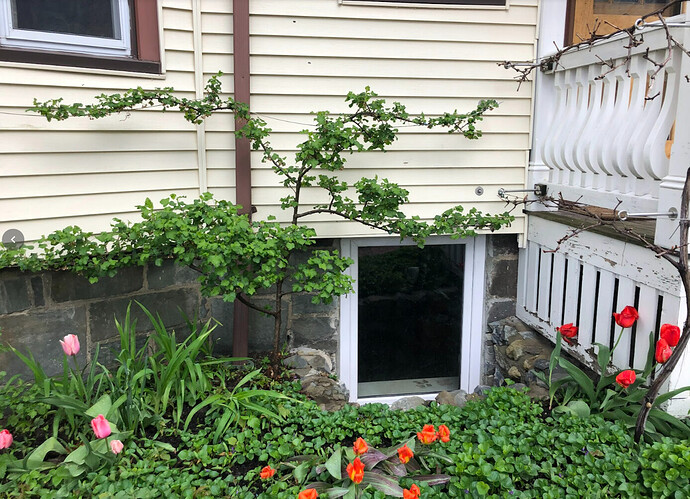