I need to be educated about Huckleberry

Hello; Went to a small one-person small greenhouse operation and received as a gift a plant supposed to be a Huckleberry. The owner found an envelope marked Huckleberry that was at the bottom of the former owner drawer, Planted them for the first time and got those. He had no clue about shape, color, hardiness, taste etc… Maybe he did not like my face and gave me a poisonous plant! Ha! Ha! Ha! 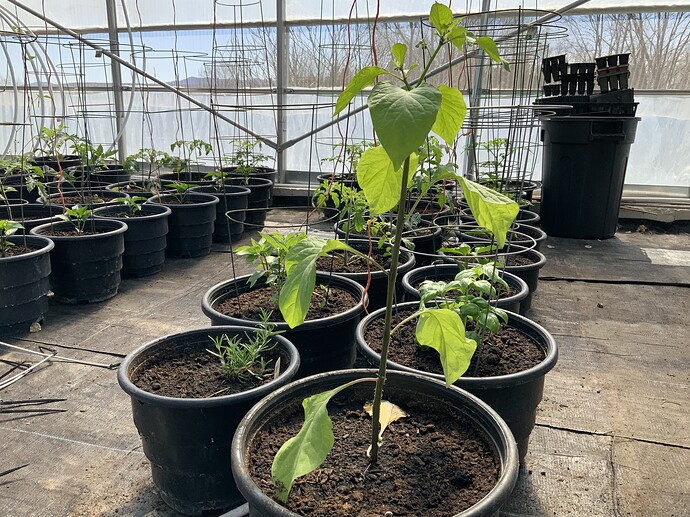 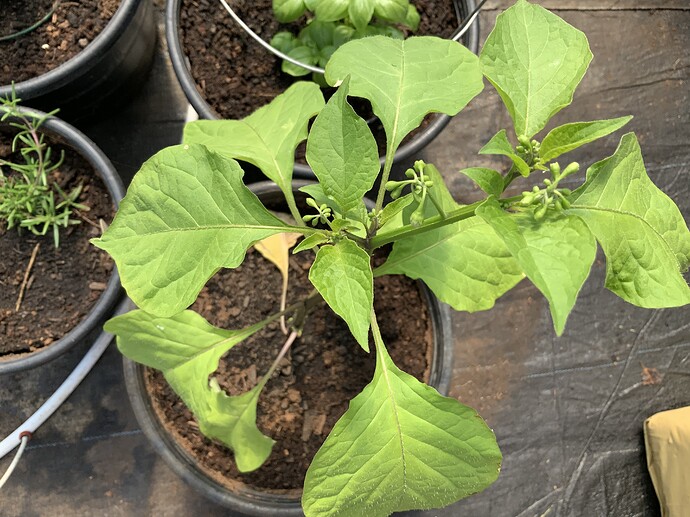 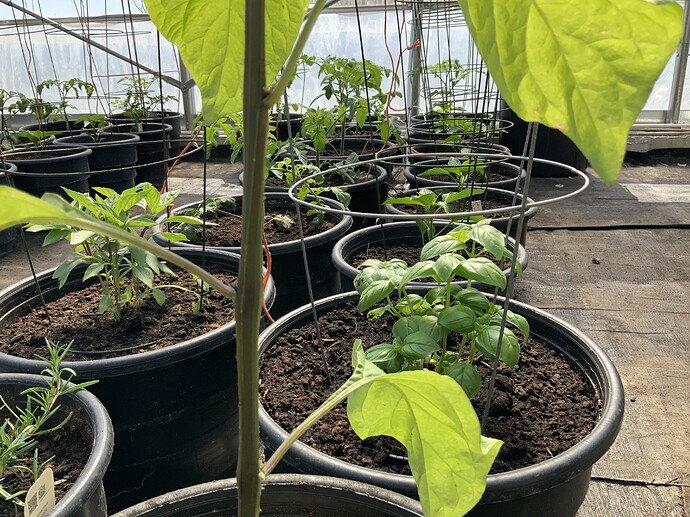 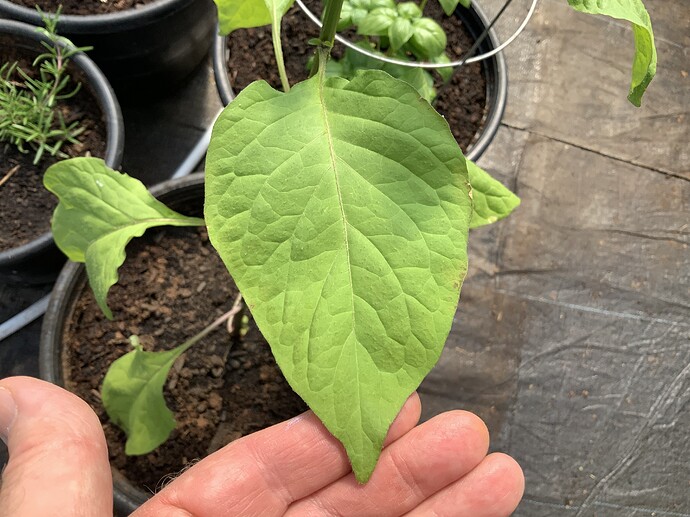 Goggle the name and got Vaccinium Family that seems to have about… 450 different members. Oh boy!!! The more I searched for a simple name and some explanation the more I got confused…

So if someone could enlighten me I would appreciate:

The plant in the photo is probably native to North America? Could it be eaten? Will it become a bush or remains a «plant». Hardiness zone if you know?

Thats not the wild Huckleberry in the US south that is related to the Blueberry.
The common wild huckleberry I grew up with in southern woodlands is similar to blueberry, but smaller fruit and leaves.
My understanding is that it is the southern counterpart to the Blueberry which is wild/native in the northeast.
That plant in your pictures, I do not know what you have, but im guessing in the nightshade family

Perhaps your plant is one of the types of nightshade kin to groundcherry.
Maybe related to this one:
https://www.kswildflower.org/flower_details.php?flowerID=756

This one looks more like yours, Eastern black nightshade.
https://www.illinoiswildflowers.info/weeds/plants/black_nightshade.htm

Solanum nigrum, aka “garden huckleberry”.
Edible in moderation, (supposedly…I ate one or two and ignored the rest…and I’m alive…been about 50+ years ago, got the seeds from GURNEY;s)… but not tasty.

*I could be mistaken about the exact species name…but I believe Baker Creek Heirloom Seeds sells the thing I raised from seed in the 60’s or 70’s.

Vaccinium stamineum, commonly known as deerberry, tall deerberry, squaw huckleberry, highbush huckleberry, buckberry, and southern gooseberry, is a species of flowering plant in the heath family. It is native to North America, including Ontario, the eastern and central United States, and parts of Mexico. It is most common in the southeastern United States. This species is quite variable in morphology. It is a shrub usually growing up to 1.5 meters (60 inches or 5 feet) tall, but reaching up to...

I have lots of these… commonly called deerberry… highbush huckleberry and a few other names.

They ripen after wild blackberries in August mostly… birds and other critters love them… I have to bag them to get any ripe ones… but they have a very mild somewhat bland taste. 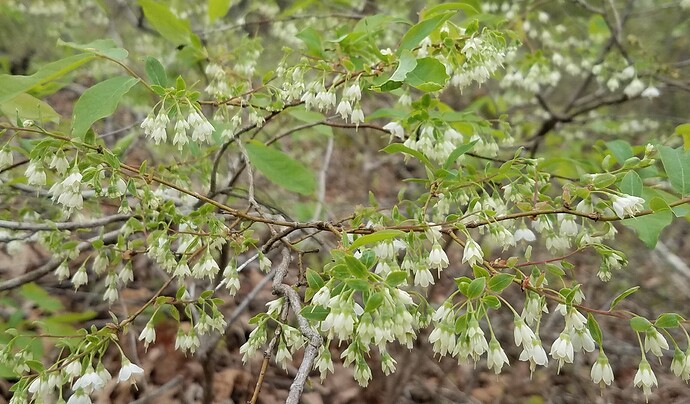 yeah i grew them last year. this looks like the plants i had. they had several . some called blackberries. the others had a german name . also called garden huckleberry. didnt care for them.

Thanks everyone for putting your grain of salt, I appreciate it. So they seem to be popular with deers, right? I have enough problems with deers without giving them some appetizers before they get to my apples. That plants will likely end up in the… compost bin!

No,
TN Hunter is describing a nice berry, but not the thing you posted.

Like I said, raw, I didn’t like the taste…but there are recipes for cooking/baking that sound pretty good.

Like others said there is more than one kind of huckleberry which is what confuses people. There is the good one related to blueberries but is just not as hardy as blueberries. Then there is the bad one which may be the one you have which I think is part of the nightshade family.

these are annuals in the tomato/ groundcherry family. they dont really have true berries. they look like true huckeberries so i think thats why they nicknamed them garden huckleberry. i didnt try mine in recipies just fresh. they are so small it would be a pain to pick enough to make something with them. fruit of both kinds i grew were about the size of a big pea.

Right you are, steveb4.
But, people pick currants and that’s about the size of the ‘garden huckleberry’…it’s actually like a tomatillo or tiny tomato or pepper …that kind of a fruit…the term ‘huckleberry’ is actually unfortunate as applied to this member of the nightshade family.

not the one i grew. 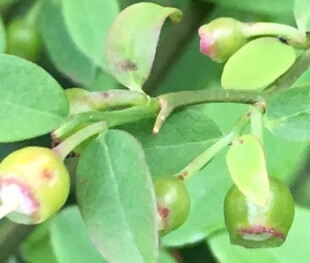 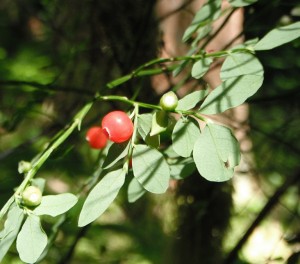 I grew ‘Garden Huckleberry’, Solanum melanocerasum, 30 years ago. Huge clusters of big, plump, beautiful blue-black berries.
I followed instructions to boil & leach with baking soda to remove/inactivate toxic alkaloids, and added tons of sugar, grape juice concentrate and lemon juice for flavor… made pretty pies and jam… but it all had a really discomforting metallic aftertaste…

Supposedly there are some ‘Wonderberry’ strains… S.burbankii, maybe?.. that are even tasty enough to eat right off the plant.
I’ve not tried them… 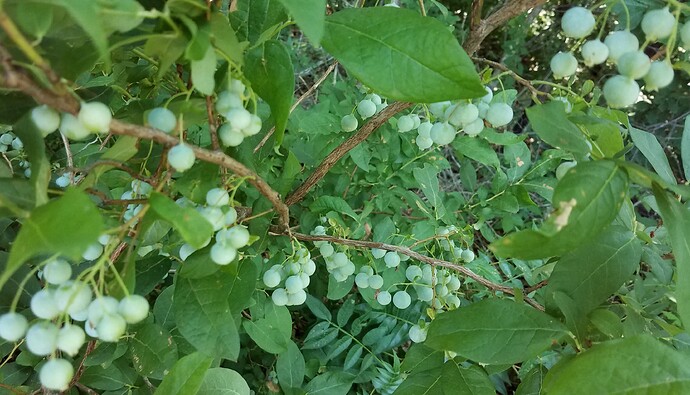 That is what my wild deerberry / highbush huckleberry fruit looks like when green. They turn a reddish purple color when ripe… but have little flavor.

You can’t find a ripe berry on the bush… birds and chipmunks take them as soon as they turn. I bagged some last year and finally got to try a ripe one… was not impressed.