My Indian Free peach at last is ripe. A couple fell off, It has about 18 fruit. Many of the fruit buds were killed last winter, so not a huge crop. I pulled about 10 off, and I’m going to leave the rest on a couple more days. It has a good acid kick. Excellent as far as I’m concerned! Arctic Glo was sweeter, it is very similar, yet has more of a peach flavor, almost like a yellow. A keeper for sure! Best peach I had this year! 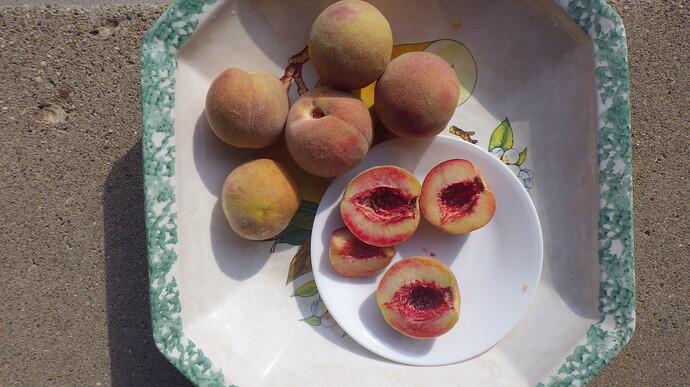 Mine are done here as well. Picked the last of them last Sunday. Tiny 2nd year tree so it was just an introduction with most of the few pieces of fruit quite small but I expect the larger ones were more representative of what will be.

I agree totally with you on your assessment of flavor. As nice to the mouth as the eyes and harvesting such nice peaches in Oct. is just amazing to me. Were it not for this forum and Scott in particular my last peaches this year would have been on the 2nd week in Sept. I’m still harvesting my Heath cling but I think I like Indian Free more.

Thanks! First year of harvesting stone fruit, so pretty happy with results. I had to wait three years to at last sample fruit! Last year any chance of 2nd leaf harvest was smashed by a dozen nights of negative number double digit cold temps.
I know we talked Steve into trying this fruit, and his tree didn’t survive. Now I think fruitnut would not like this fruit. It does have a strong acid presence. I would pass on this one Steve. Even at maximum brix, I think you will still have an acid dominance. Mine is soft, and certainly ripe, I will test brix tomorrow. I was gone 4 days and had many garden chores to do today.

Looks good Drew.Mine may get a few fruit next year.Were yours cross pollinated by hand or did the wind and insects do that? Brady

GREAT NEWS! Thanks to those here I have 2 trees that I planted last fall so possibly I’ll get to try some next year. Always reassuring to hear something in the pipeline is a goodie.

Were yours cross pollinated by hand or did the wind and insects do that? Brady

I would say both. I did a few of the flowers, like maybe 8 of them, yet it has 18 fruit.
Pollination does not seem to be an issue here.
Speaking of pollination I did a few raspberries, and I emasculated them, Not all the drupes were pollinated telling me my technique did work, and I have good crosses.

Tiny 2nd year tree so it was just an introduction with most of the few pieces of fruit quite small but I expect the larger ones were more representative of what will be.

Mine is third year, although first time fruiting, and the size was mixed. In the photo are the bigger ones, one smaller one. I would say it’s a mixed bag of size. Medium to small. Taste is plenty big!
I asked my wife what was better Arctic Glo or Indian Free? We both agree Arctic Glo was better. It was sweeter, yet full flavored with a very slight acid taste. It may be because it ripened the first week in August the hottest and driest time in my area. Conditions are perfect for highest brix grown outside in this area in the first week in August or around that time. July is bone dry here.
With that said, this is a keeper all the same.
Also to note It’s October 12th, and most years we have no frost or freezing temps by this time, so as long as it ripens at this time, i should get fruit every year. Now this fruit may be a lot better with higher brix in warmer areas. It’s still good here, just saying conditions are not ideal this time of year at least for me.
Thecityman may get better fruit. A good selection for zone 7 and 8 I would say. Well at least for ripening. Disease pressure may come into play more in those areas. I had no rot and no insect damage whatsoever. Not bad for a rookie! Well not really, again 40 years of growing plants is experience.

I have to say the Indian Free must be some of the coolest looking peaches with the red on white flesh. How is the cold hardiness of the trees? Any chance they would perform in 5a? I just planted three peach trees this spring, if they do well maybe I’ll try an Indian Free. Or if I could talk someone out of a piece of scion wood…

Or if I could talk someone out of a piece of scion wood.

I think my tree has canker, so I’m hesitant to offer wood up. I have been removing any I see, but the tree is compromised and wood from it could introduce it into the host. Mine is on citation, and if it does die, I will replace with Indian Free on Lovell from Raintree. I have had bad luck with peaches on citation rootstock.
It may be fine to take scion. The upper part of the tree looks great! I refer to others, if OK, to harvest scion? I am unsure?

OK, I tested brix and it is 16. I guess not too bad for a peach outdoors. I have been testing everything now with this meter. I’m growing nectar variety cherry tomatoes. Brix is 12! I ate an orange today, it was tart, brix was 12. I bought it for the zest actually.
I picked a fig today but didn’t think I could get a good reading? Not exactly wet! I dried it for 12 hours, and man it tasted fantastic! I prefer figs dried!
So now I think about brix all the time! Not sure if this is good or bad?
Just guessing after using the meter for awhile, I think Arctic Glo would have tested around 20. Still not the 28 fruitnut can obtain on some nectarines.

I’m planting one next season. I’m also planning to cross it with my Flavor Top Nectarine.

What pollinators did you used?

What pollinators did you used?

Arctic Glo, I like the acid fruits. I want something that ripens between the two.
It is also the closest tree so likely most of the fruit was pollinated with Arctic Glo.
I won’t have that many seeds as I will be giving away most of the fruit. Although I will have plenty 5 or 6. Always next year too.

You might like Raritan Rose white peach. It ripens 2.5 weeks after Arctic Glo and has some similarities. My notes on Raritan Rose:

I ate some Raritan Rose peaches Aug 5-6, 2015 from WhiteOak Nursery; got them right before they sold out. The color of these fruits matched the photo on Arboreum’s website. Skin thick and not worth eating; peels or sloughs off easily. Fruits bruise easily. Free of disease. Flesh beautiful white w/ pretty red and purple speckling; soft; melting; sometimes a bit mealy, but not too bad; fairly juicy; fairly sweet; and SUPER SOUR, surprisingly so. Abrasive to tongue like if one eats too much pineapple. Some of them taste more like a yellow peach. Some had a sweeter flavor with a cranberry overtone. Not especially aromatic to my nose despite reports that it can be so. Best cut into quarters, or halves. Cut easily. Freestone. Here are some photos of my son eating a Raritan Rose; he had peach juice running down his elbows: 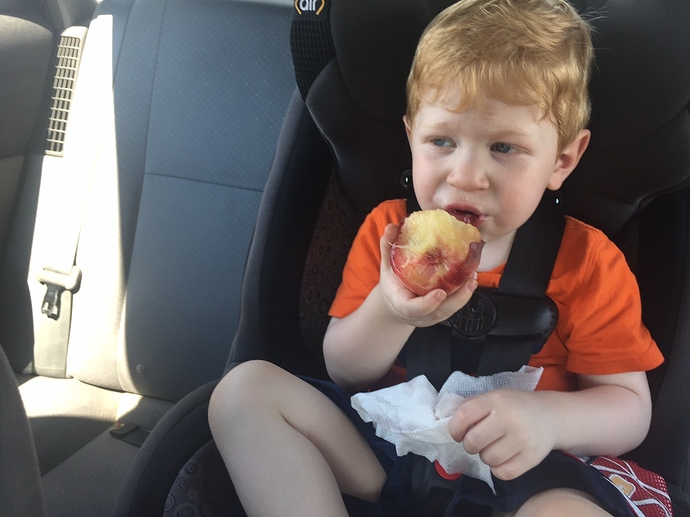 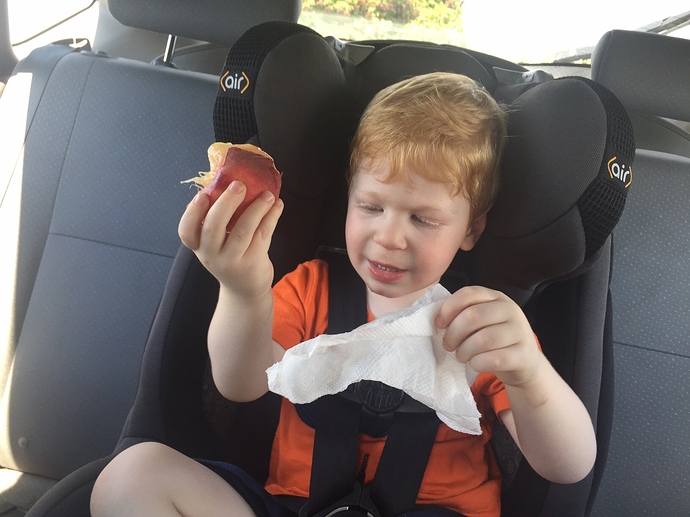 Notes from other growers: Raritan Rose is a beautiful medium-size peach. Can attain a perfume-like aromatic scent. One of the best early white fleshed peaches. Some acidity in the flavor profile. Soft and melting but in bad years can get mealy or watery. Winter hardy. Productive, vigorous. High level of resistance & tolerance to bac spot & other diseases but can occassionally get brown rot. Can suffer occassional split pits. Regional nurseries and forum members claim this does well in Mid-Atlantic climate. Ripens Aug 4-19. Recommended by Univ of Maryland. Bred in New Jersey in the 1920s. Descended from J.H. Hale. Clemson Univ reports that in SC, fruit is good only about every other year on average. During off-years the fruits can be ugly & inedible. Amos Fisher of White Oak Nursery says they can’t be beat; one of his favorites.

LOL, I need some grand kids to feed my fruit to! Funny! Sounds interesting. I will add it to my list. I may move n a few years and have a lot more room. I’m hoping so! Although starting over is not easy. I have my yard just about perfect now. Waiting years again is not cool.
I like your notes, more extensive than my own on certain trees.

I’ve grown Rariton Rose for years but no longer in my own nursery and orchard. One thing I really like about it here is that it looks so beautiful when a tree is loaded with them and they often ripen into beautiful fruit without requiring fungicide (that is hit and miss here, depending on site and probably only applies to certain regions).

In its season here it’s a good but not great white peach. Doesn’t come close to the flavor intensity of Silver Gem nectarine- but I have a jaded palate. I bet Olpea could sell them.

Yeah I want this one as the ripening time is when nothing else I have is ripe! You mentioned a couple other early peaches that sound good too. O’Henry will be a later yellow. I need that too.
A little update on Indian Free, I guess I can’t count as I actually got 23 peaches off this little tree. Very cool! I tested three for brix, sitting on the counter 2 days has increased brix to 17, not bad!
Or the first i tested was not as ripe. i refrigerated them now. Also I still have 8 on the tree and I best harvest them they are certainly ripe as they can get.

I have a lot of friends concerned with my music research and one I have known since about 1990. We have become good friends I sent his a few of my Indian Free peaches and some jam, here is what he said
*Drew,

Box was waiting on our doorstep,
everything arrived safe and sound, peaches are out of this world good. Thanks
for sending those! They made it fine, and were a total
treat.

We have a farm nearby, Schnepf
Farms, they have around 5 varieties depending on what portion of peach season,
nothing compares to what you sent. Not close. And we thought they were good, so
you showed us what good really is. But they are cool, you can pick your own,
they make preserves and so forth, pretty good. They grow quite a bit, and have
been part of the Valley scene for decades. http://www.schnepffarms.com/ (website
seems to be down at the moment)

Will be trying both jars tomorrow,
they both look incredible.*

Drew, interesting farm stand that sells a lot of jams. One you might try making is ‘Peach Jalapeno’! Sounds really good.