Is my grape vine ok?

My new grape vines started out looking great but I’ve noticed that the tops of the vines have basically lost all color. There is no visible damage, no darker colored veins, the leaves are just colorless. Is this some sort of deficiency? Are they supposed to look like this? These are mars seedless grapes. 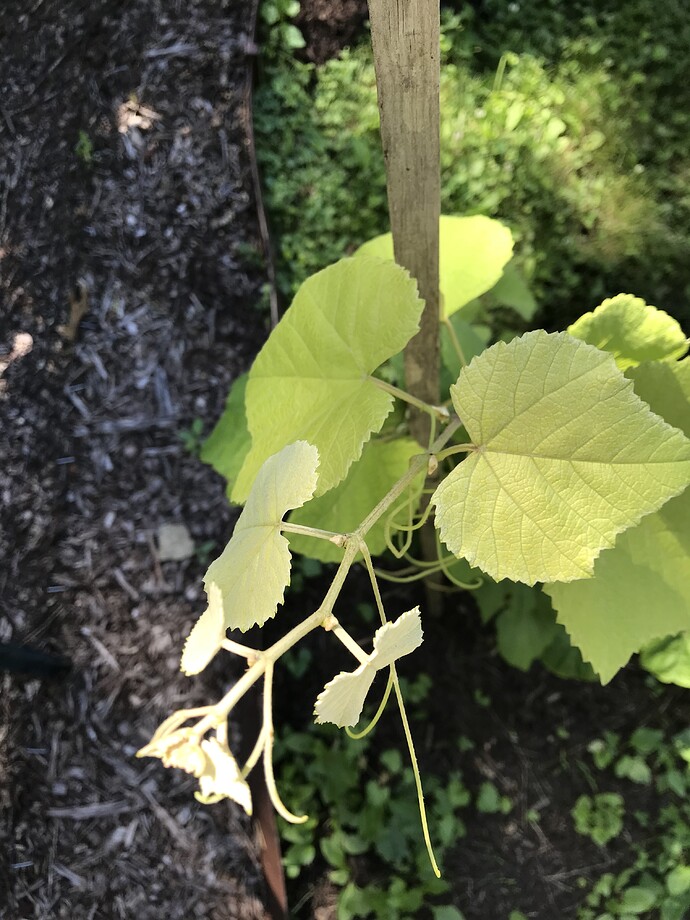 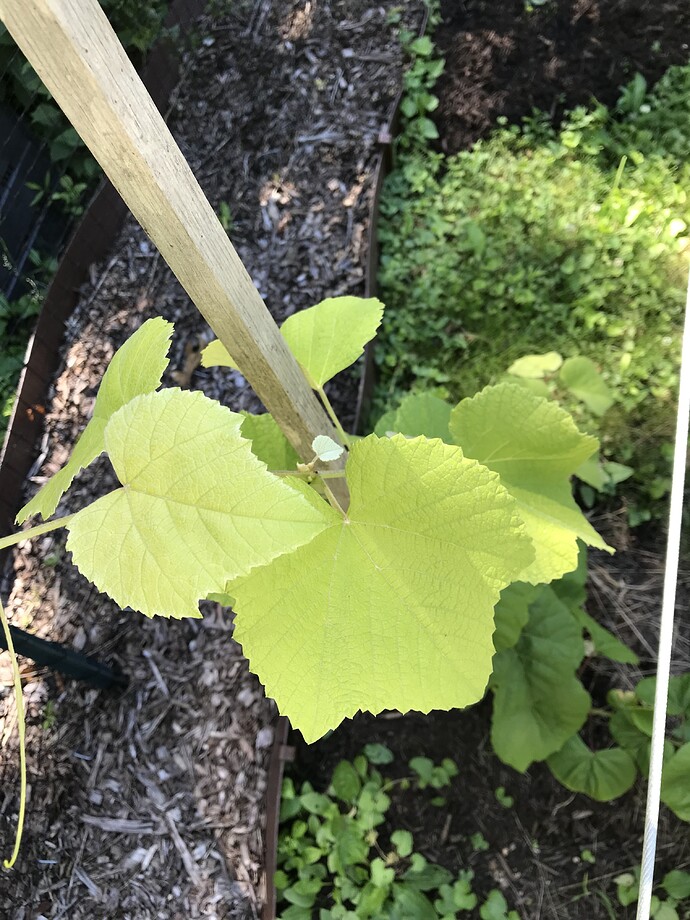 the tops often start out a little light. But some of your larger leaves are quite lightly coloured to.

Are these plants in full sun?’

Do you have other grapes? Are they grafted or own rooted? and is there anything special with your soil?

I think nutrient deficiency’s with grapes where often due to soil PH. And they have different rootstocks, especially to deal with alkaline soils.

I would try foliar feeding, bypasses soil PH issues. If it is nutrient deficiency that should work in a hurry.

Grapes can do that here when it’s wet and the soil is calcareous. I think that ties up the iron causing a nutrient deficiency.

Looks great other than the pale color…

You could try gently pulling back your mulch layer… sprinkle the soil surface with some Epsom salt, blood meal, greensand, then add some compost and put your mulch back in place. Water with compost tea a couple times a week if needed.

Epsom salt and blood meal will green just about anything up nicely. Green sand a very good source of iron and other trace minerals.

Thanks, these get about 6-7 hours of sun a day, they are grafted though I don’t know what root stock. They are in pretty much native soil though I did fertilize them once a few weeks back.

I will check the ph in that area and see where it’s at. I’ve never done a folier spray, are there special foliar fertilizers?

This is the first time I have ever heard of a grafted Mars Seedless. It does not need grafting, as it’s reasonably tolerant to phylloxera. If it really is grafted, then I would think the rootstock could be the cause of the yellow leaves. The yellow looks way too uniform for iron chlorosis, where the veins are the last bit to turn yellow.

I will check the ph in that area and see where it’s at. I’ve never done a folier spray, are there special foliar fertilizers?

MiracleGro would do it. Superthrive is basically micro nutrients with growth hormones.

Be aware that ideally, the plant absorbs nutrients through the roots. Foliar feeding works but is not as efficient (unless there is something wrong with the soil at which point it is a nice band-aid but you need to fix the soil itself). By not as efficient means that the rate of absorption (20~30%?), the ability of the plant to move those nutrients to other parts of the plant, the absorption of negative charged nutrients (which have a hard time getting in), basically it helps to understand how it works.

So: mix a batch of miracle Gro, wet the vine with it, if your problem is lack of nutrients you should see results in a few days.

Grapes can do that here when it’s wet and the soil is calcareous. I think that ties up the iron causing a nutrient deficiency.

I didn’t think of that but iron deficiency does show up with yellowing leaves and darker green veins. High PH does cause iron uptake to suffer. PA_Fruit_Grower, this is a good example how sometimes it pays to dig into the root of the problem (so to speak). If this is the case (may or may not be but if it is) what I said would have put a neat band-aid on it but it would have not fix the underlying problem, high PH. Which we still don’t know if it is the problem, just using it as an example on how to go about finding out.

to be honest. Since they are young plants that you fertilized a little early maybe. I think it’s just best to give them a few weeks.

My experience is that randomly applying fertilizer or foliar spray tends to do more harm than good.

And grapes are quite strong. So even if the leaves stay a lighter colour i think they will survive just fine.

What kind of native soil do you have? do you have a lot of acid loving plants growing well (like blueberry’s and rhododendrons?)

What other plants do you have nearby? and do they show similar signs? if not. Likely giving the plants some time to make a larger rootsystem will naturally solve the problem. You might have caused this with the fertilizer you applied already. I would not risk applying more before your sure what’s wrong. Or if anything is actually wrong.

I measured the ph at around 6.5. It’s a pretty heavy clay so that seems about right. I don’t see any other problems and they are still growing so I’ll probably just let them be for a few weeks and see what happens. The other nearby grapes all seem fine.

to be honest. Since they are young plants that you fertilized a little early maybe. I think it’s just best to give them a few weeks.

My experience is that randomly applying fertilizer or foliar spray tends to do more harm than good.

It may be the mega short seasons we have here in Alaska (4 months if we are lucky) but I’m a big fan of foliar feeding of starter plants as needed, and the plants let me know when it is needed. For plants just getting started I may do Superthrive or Clonex, which is mostly micro nutrients and in the case of the Clonex a miniscule amount of NPK. Long story short; the cuttings I’m rooting right now have until early September before they go dormant; they will need to have enough roots between now and then to survive the Alaskan winter. Dialing nutrients ensure the strongest possible growth in the short amount of time they have.

Heck check this little haskap I started in spring from hardwood: 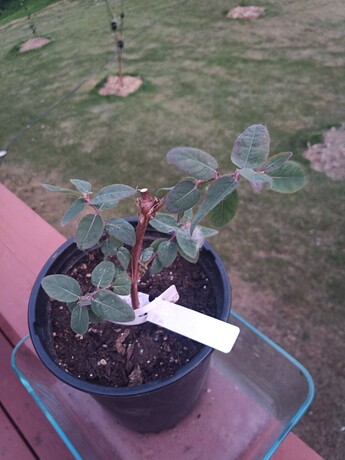 It rooted in an aeroponic medium with a healthy doze of micro nutrients, transplanted into a 16oz cup of coconut coir and once the roots began hitting the sides into a gallon trade pot of potting soil and well aged compost. It is so flush with nutrients that it is as dark as it can get before toxicity kicks in. It will probably not put any more top growth but between now and September the root mass will probably triple, giving it the best chance at surviving the winter.

The OP grape; that yellow, and not because of lack of sun? It is begging for a very diluted amount of foliar feeding to really get going. The risk is fertilizer burn but only if you screw up and don’t dilute enough.