I planted several hardy kiwis three years ago (and haven’t taken great care of them), and I have three that have bloomed so far: a male and Ana which both bloomed for the first time this year, and the Issai which has bloomed every year. I think there were two or three fruits the first year, and I think a late freeze took everything last year, so this is the first year that the Issai vine was big enough to really bloom a lot, but the fruit set was really poor. It seems like nearly every flower set fruit on the Ana (a few dozen maybe that are all sizing up really nicely now), but I’d guess there were well over 100 flowers, maybe multiple hundreds on the Issai, and I may not even have one dozen fruitlets. The Ana and my male bloomed at pretty much the same time, but the Issai bloomed long enough afterwards (about two weeks) that I don’t think there was any opportunity for cross-pollination. If some of my other hardy (arguta) kiwi varieties are going to bloom later like the Issai, then maybe I’ll need to find another pollinator that will benefit the Issai, too, but if Issai is the only one, then it doesn’t seem worth planting a male just for it. On the other hand, if it’s going to set fruit so poorly without a pollinator, I’m inclined to think it wasn’t worth planting. The male that bloomed, by the way, is one I bought from Hidden Springs. I also have a 74-46 male from Edible Landscaping that hasn’t bloomed yet. What do you all think?

It was year #4 before I got a good crop (3 quarts) from Issai. The 2 of the 3 other vines planted at the same time gave me a taste, but were pretty light. And Ken’s Red had no fruitset, though it did flower.

I’m not even sure if I’m getting any pollination. My oldest male vine (74-32 from Whitman Farms) produces at least some female flowers (and even a single fruit). I haven’t spotted a male flower on it. I have a couple younger male vines from Rolling River, but I don’t think they have flowered yet.

So, I would say to be patient with Issai. Even if you don’t add any more pollinators, you may start to see reasonable yields. As far as fruit quality, I liked Issai the best. It had the highest brix and a strong rich flavor. You have to be very careful to wait to pick them as they start to soften. Picking them earlier results in a strong unpleasant flavor. I would pick one every week or so from late August on and wince every time, until October when they started to get good.

I did see some winter die-back from Issai this year. None of my other vines were affected. I should still see a decent crop (at least half).

Thanks for the feedback, Bob. It’s no big deal for me just to give my Issai vine more time, and you’ve given me a little more hope.

I’ll start another thread to ask another related question.

Eric, is your Issai setting fruit yet? Mine is 2 years old and flowered this year, no fruit set, which did not surprise me. How does yours handle the summer heat, mine looks to be stressed even with lots of rain?

Yes, my Issai has been loaded the last two (or three?) years. Covering the vine to protect against late spring freezes seems to have helped a lot. I have my Issai growing on the railing of my front porch, so it’s been fairly easy to cover with quilted blankets on cold spring nights. Hardy kiwis sometimes, probably more so as they get older, bloom even after the initial growth has been frozen, but protecting the initial growth seems significant when there are late spring freezes. It does seem to need pollination, though. One year when the bloom on my males vines was all but completely taken by a late spring freeze I hand pollinated all but one section of my Issai vine, and I wound up with a great crop on all but that one section.

This photo is from a year or two ago. The whole vine was pretty much covered like that. I’ve been very happy with the fruit set. This year’s crop is just as good or better. I’ve started getting some Ana fruits already this year, but nothing has ripened on my Issai yet. My other vines are unprotected from late spring freezes, and I haven’t taken care of them as well, but there’s some fruit on some of them, too. 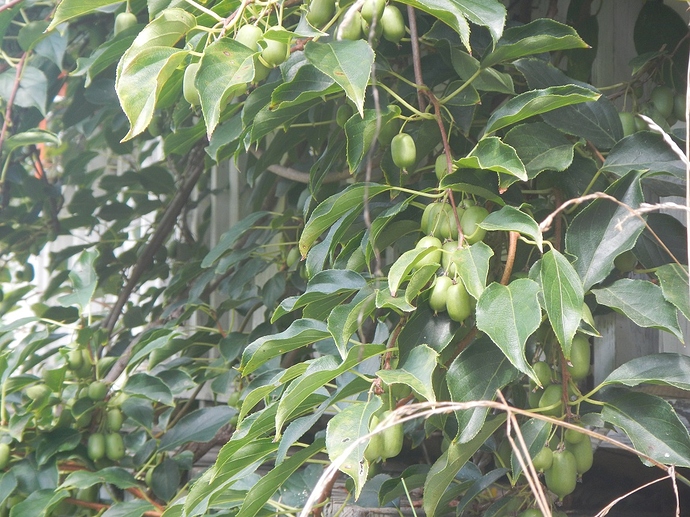 I just picked a gallon of kolomikta kiwis from one vine this afternoon, and there are another gallon or two to pick yet. My best yield ever by far. Unfortunately some vines are very dry and dropping leaves, but are in a location difficult to water. Hope they aren’t dying.

So you think I will either need to get a male plant or hand pollinate to get fruit.

When I hand pollinated it was with pollen from a male plant. Issai is supposed to set fruit without a male. That’s not what my little experiment indicated, but the standard claim about Issai not needing a pollinator must be true to some degree under at least some circumstances. I’ll be glad to send you a piece of male scion wood this winter – remind me later if you want me to – if you want to just graft one male branch into your vine. I haven’t grafted kiwis yet, but I think I read that they give pretty good takes so long as you wait until the stock has grown enough that it doesn’t bleed any more when cut.

Thanks, I just might take you up on that offer. I did hand pollinate a few flowers last spring but no fruit set, but again my plant is still young.

Were you just pollinating from flower to flower on the Issai vine itself? I guess that might help if Issai is supposed to be actually self-pollinating, but I don’t know if it isn’t rather supposed to set fruit without pollination at all (parthenocarpically).

Another year or two of age might make a big difference. Most of my kiwi vines have flowered for a year or two before setting fruit. It wasn’t long with either the Ana or the Issai before I started getting crops like in the photo above, though. This is only about their 6th growing season in the ground, and they weren’t very big at all to start with, and this is about my 3rd year in a row with a really nice crop on the Issai which I’ve been able to protect from late spring freezes.

Were you just pollinating from flower to flower on the Issai vine itself?

That’s what I was doing. It is only in its second year so I am not stressing too much.

How does yours handle the heat?
Mine gets full sun and gets stressed from heat. Lots of water helps. 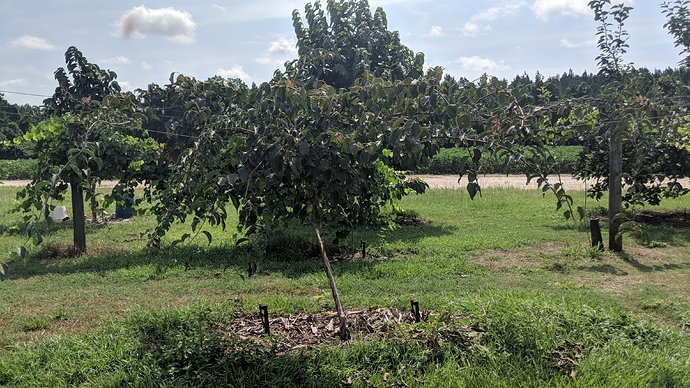