I just trimmed one of my newly planted tigertooth jujube suckers, it had two leaders so I pruned one to below soil level. Being new to jujubes I’m looking for opinions.
These are approximately 1/4” by 9” and look like last year growth.
Usable scions? 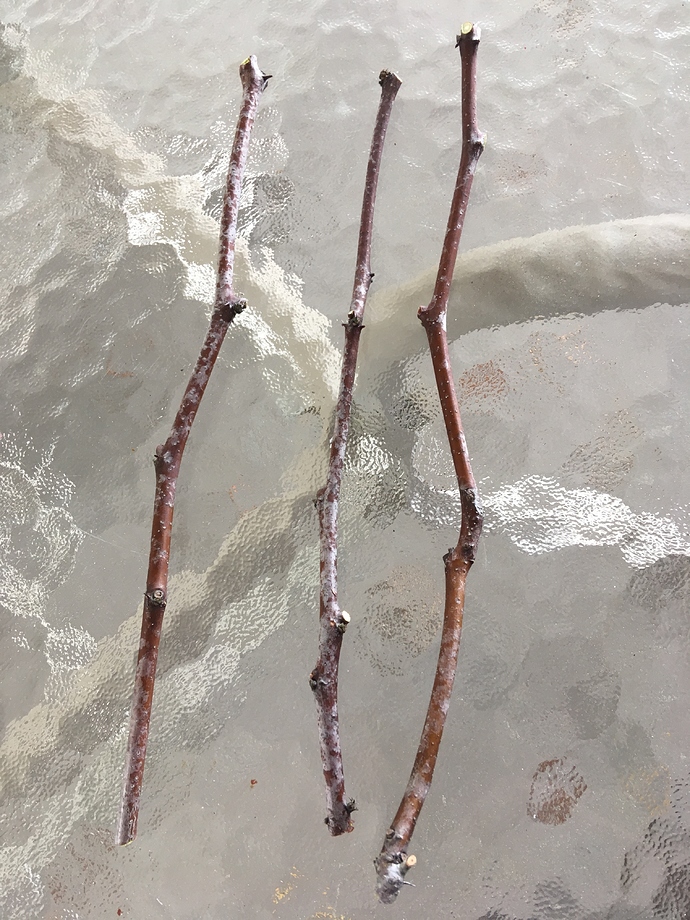 they “look like juju”…cant see the cuts. Scratch them with your thumb and if there is green bark underneath (I’d assume there will be) then they are useable scions…

Was it on it’s own roots, or could the sucker be from the rootstock? You can check on the original plant for a graft union.

No, they’re root suckers from a big tiger tooth tree on its own roots.
Basically since I’m new to jujube I was just curious as to what the norm for scion wood is, such as number of nodes etc most people try to use. I seem to recall someone mentioning they used long scions for jujube. I’ve grafted scions with just one bud on apples, just not sure what to expect with jujubes.

Basically since I’m new to jujube I was just curious as to what the norm for scion wood is, such as number of nodes etc most people try to use. I seem to recall someone mentioning they used long scions for jujube.

I usually like 2 buds per graft (for both jujube and apple), though you can make do with 1 if needed. It’s hard to gauge the thickness, but if they are much smaller than the tree you are grafting to, you can just do it as a bark graft, rather than a cleft/splice graft.

Thanks! That’s the kind of advice I was looking for

I practiced with a scrap piece of it. The cambium layer looks about the same as apple. I know Scott mentioned the wood is harder than apple.
I only have so many rootstocks to play with this year and I want to get them right if possible.
I usually try to leave at least 2 buds with apple also.
Bear with me if I ask some basic questions:
Do you use rubber bands with jujube?Or would Buddy tape alone work?
How long do they normally take to callous and show growth?
Should I wait until the rootstock is pushing new growth before grafting or can it be done while both are dormant?
Do you find them more difficult than other fruits to get to take?
Thanks,
John

Bob, I apologize for all of that. I just found a thread where you linked an article for grafting jujubes and it has a link to a video as well as plenty of good experience in it.
I will study now.
Thank you for the advice and I’ll stop posting on this thread