This is the basket I joyfully delivered toy mother last Sunday.

She liked it …Yeah. 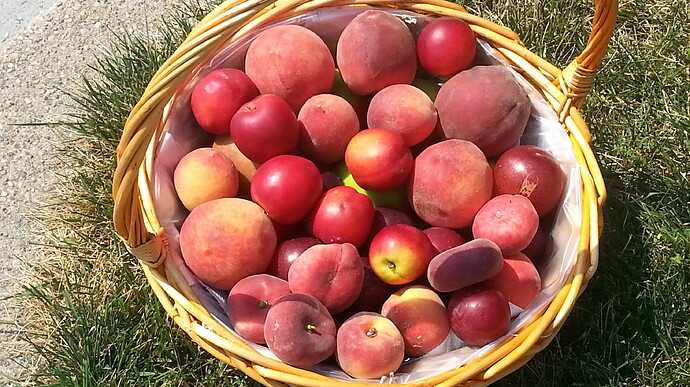 And it came from …here 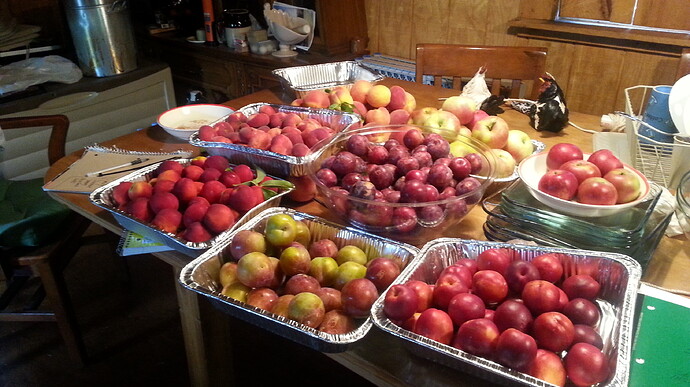 All that yummy fruits. Now you know why we are all fruits addict.

I am becoming a plum and peach addict.

Totally new dimension to the flavors that now are not destroyed by commercial production/delivery system.

Mike, For us northerners, that last picture definitely smacks of rubbing in our faces. Dude I’m Jealous!! Great job, enjoy.

I am a northener in zone 5b in upstate NY.

Except for the plums these came from trees that are second year in the ground as bare root whips.

I give credit to the fact they are grown as espaliers. Even the Saturn peach which refused cooperate in staying 2 dimentional had its runaway branches tied down to pegs in the ground so it looked like tall ground cover.

2 captan/Immunox/Triazicide applications followed by 1 Imidan and 1MFF and that’s it.

I’m in zone 7a and you’re way ahead of my varieties. Holy Cow that great!

Mike, that is incredible.

2 captan/Immunox/Triazicide applications followed by 1 Imidan and 1MFF and that’s it.

What’s time frame of these sprays? I need to get my arsenal ready next year if my trees cooperate!

It’s been 3 yrs. since I’ve seen a peach bloom in my orchard, even the little ‘Ia.’ peaches haven’t bloomed. We are a n. slope orchard so the trees get a long cold winter with an extra dose of n. wind. Last winter had 2 extended periods of -15 w/some nights to -20, and they call us southern z5a. I did break down and plant two plums this spring that Cummings said they were fruit bud hardy here…we’ll see. I still liked your pics.

Tom,
In re-reading my post I realized that I was not as clear as I should have been and not given credit to Alan as well.

I used Alan’s light spray model as a starting point. Please keep in mind that… Just like politics, all spraying is local.

My orchard is densly planted espalier and is roughly 1/3 stone fruit and 2/3 pomme.

Specific dates are not important as they vary year to year in any one location due to varying weather/temp conditions and also vary from locale to locale in the same year.

But this past year my orchard required its first spray on May 16 which was of Captan, Immunox and Triazicide.

14 days later I replaced the Triazicide with Imidan, sprayed the pommes then added Triazicide to the remaining mix in the tank and then sprayed the stonefruit.

For some reason the JB attack here was light this this year and when it started it was concentrated on the cherries(which had no fruit on them) so one bottle of hose-end pre-mixed aplication of Sevin on the cherries and apricots(which were next to the cherries) was all that was needed.

SEE THE “MIX IMIDAN & TRIAZICIDE ?” THREAD We HAD STARTED ON MAY 17

Mike, why do you do the later spray with Imidan? It seems it would make much more sense to use the Imidan early, and do your later followup sprays with the Triazicide etc if that’s what you want to use? Any particular reason for that?

First: In my last post I reversed what I did in the second spray.
( I will edit that post now and those reading this thread later will question our.mental state during these last 2 posts)
I mixed up a batch with Imidan instead of Triazicide and sprayed the pommes. Avoided using Triazicide to avoid mite problems on the pommes (based on Alan’s experience of mite breakout with Triazicide on pommes).

THEN … I added TRIACIZIDE to the remaining mix in the tank and used that (Imidan & Triazicide) on the stone fruit as there was no mite issue on stonefruit.

Second: I did not get my hands on the Imidan until after the first spray & after hearing that Triazicide might not be the best treatment for PC.

That and the co-operating weather & espalier, I believe) gave the good results.

ok…now that makes sense. Not that you are compelled to explain yourself or anything, I was just curious.

It appears to have worked very well…no PC stings on the pommes?

I used the exact spray schedule and I only had pc damage on peaches. No damage on apples.

Are Imidan and Triazide easily available in Big Box stores?

Your question was absolutely on point right for the asking.

We, each of us, has to develop a plan that works in our small slice of the universe.

This forum is the crucible in which the varying experiences, opinions and methodologies of all, provide a base that each of us can use or modify to discover the right mix that fills our particular needs.

We enhance the thrills of our victories and dull the pain of our defeats by sharing them here.

I love this place.

I got mine at Keystonepestsolutions.com

Thanks for the link.

None that I can find. Zero…