I never expected these to last this well and hold up like they have.

Although some of the apples have spoiled most are still firm, have good crunch and are juicy; the texture is on the mealy side, and any sharpness is gone, but the flavor is quite good, but mild. I picked them a bit on the early side and I think it has made the difference. Still storing in the fridge in tightly sealed bread bags with no perforations.

Wow, that is impressive! I just planted one last year, so that’s great news.

What is your method for storing apples?

Storage life of apples and pears depends heavily on cultivar but can last along time. Cascade pear is said to last something like 6 months. Stark Bros claims their Super Red Fuji apple will store upwards of a year. I think Super Red Fuji ripens in late October according to them so that means with proper storage and apple trees that are earlier ripening you can be eating and storing apples from one apple season to the next. Meanwhile varieties like Zestar! are only supposed to store for 2 months. In fact many grocery store apples share long storage life attributes.

I pick them before they want to come off the tree, put about four pounds in a tightly sealed polyethylene unperforated bag and keep them as close to 32 F as I can. This is the first year I’ve been conscientious about picking them before full ripeness, and I think it has made all the difference. In the past I’d be lucky to get them to April.

Picking them early, did you notice if they were any more susceptible to freeze damage in storage? Maybe your Liberty were plenty ripe enough and/or your temps never dip too low. This is something I noticed with Regent although it was just superficial near the surface usually on one side and didn’t hurt the rest of the apple. My fridge temps might have dipped too low but I didn’t notice the same issue on other apples. I picked some Regent early because I liked the taste better than fully ripe… although admittedly they rate well below many other apples… so they stored themselves in the fridge quite undisturbed all winter

Liberty didn’t rate a space in the storage I had. People taste testing apples here last year uniformly rated Liberty below most everything, so it’s just not a great apple here… as much as I want it to be… although I have occasionally tasted some good ones.

Never noticed any freeze damage as such in storage, but that may be what has caused a splitting that happens on some of them. Certainly true that the riper something is (the more sugar is in it) the less susceptible to freeze they are. So that’s a good question.

Liberty is not often an excellent apple in my situation, but it’s dependably productive and good. And I’m now learning that it can be a good keeper, too. That said, I’m in the process of grafting my tree over to other varieties, particularly Karmijn de Sonnaville, although I’ll always keep a fair amount of it in Libs. Maybe once I learn when to harvest Karmijn it’ll turn into a good keeper for me too - that would be great.

Wish I could count on long enough seasons to ripen or nearly ripen Goldrush.

splitting that happens on some of them

I have some varieties that seem to split. Either too long in the fridge or maybe freeze. Pristine is one of them… but it’s not a super long keeper anyway (maybe just to the end of the year in good conditions).

We got hailed into the ground this year… so you know it’s bad when Liberty is nearly fruitless. In this case, I would definitely take Liberty over having nothing.

@marknmt … Mark, that is great storage life for Liberty. I agree that Liberty needs to picked early for good flavor. Our Liberty(Bud9) tends to over produce and needs thinning. In my experience, a good thinning improves the flavor of many fruit.
Do you wash them before bagging?
I have great luck with Gold Rush. I wait as long as possible before picking. They get better in storage too. They are keepers extraordinaire!!!
We are working on the last few bags of Honeycrisp and 1 bag of Northern Spy.
So glad you shared your info😄

Thinning aggressively is a must with Libs.

Hail is terrible. Lost all my apples to it one year.

For those wondering about storage there was a study done for pears. While certainly not apples pears are very similar where they can store. They stored the cascade pear at 2 degrees and stored the pear at -1 degree. They found -1 was the preferable temperature for storage. https://eurekamag.com/research/003/567/003567520.php

This post made me look in the “ back “ ! Of the refrigerator…
A bag each of Fuji , and Arkansas black .
Half of each still edible June. 4th
Took a bite out of them just to see,…
edible . Not at their best . But it IS. June.
So …I think not bad for June apples .

Somewhat telling of my house keeping …
Wonder what else is in there ?.?

Somewhat telling of my house keeping …
Wonder what else is in there ?.?

And I just found one last bag -I’m sure, this time!- of Libs and I’m eating a couple now. Not great, not bad. I could probably still make decent sauce with them.

I told a friend I was finally running out and he brought me a nice bag of beautiful Wealthies, and said I could have more. I’ll try to remember to comment on them here once I try them.

Wow. Please let us know about the Wealthys. I haven’t thought of them as a storage apple. They are tried and true for me … you can count on them every year.

I should mention that I cannot be sure that the tree these apples came from is a Wealthy - the guy who has it was told that’s what it was when he bought his house decades ago. The tree is ancient. But it does fit the description and it’s a fine apple no matter what its name is.

@fieldsofgreen, here are a couple of snaps of the alleged Wealthies: 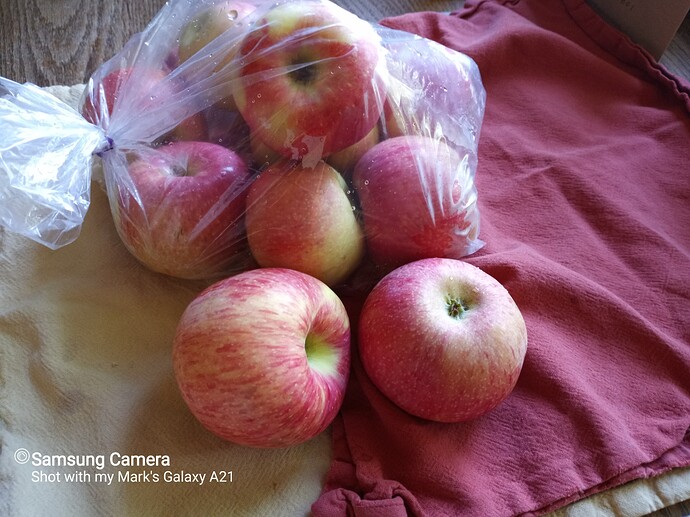 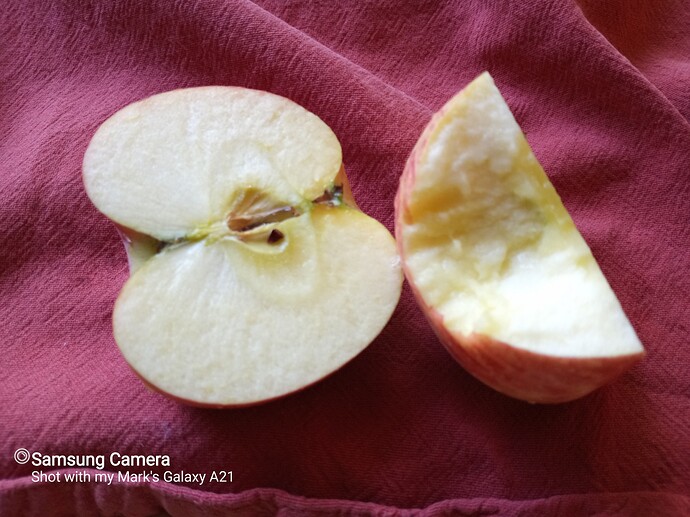 First bite was very impressive. Very flavorful, sweetish with some acidity (probably a lot sharper a few months ago), good crunch, thin skin, even the texture was acceptable -not nearly as mealy as my Liberties at this stage. By time I got through the apple I was starting to find it cloying, but still, quite outstanding for an apple kept since early October!

Those look like my wealthy .
Never thought of them as a storage apple .
Never tried, may have to.

They do look like Wealthy(s)! I am definitely going to put a bag or two in cold storage this season. I always think of Wealthy as the first good pie apple. For me, they don’t have enough pectin for great applesauce. But I’m picky when it comes to apples. My family has raised apples for generations. Instilled in me is a deep appreciation for this wonderful fruit. Every variety has a purpose and place. My grandfather(who lived to be 100) ate an apple in some form nearly every day.
Btw… the flavor of Wealthy is particularly influenced by the mineral profile of the soil in which it resides. A little tidbit from my uncle(professional orchardist)
Mark, thank you for the great pics and new information

Glad to have the confirmation re cultivar; I’ll tell my friend. (And I’m sure he’d be happy to share a bag with you if you’re in Mizzou anytime soon - just let me know.

I’m assuming that with all the trees you have you sell apples. I may be your customer this fall. We got really poor bloom and will get few Liberties, some Karmijn, Carousel/Cameo, maybe some Calville Blanc … probably not much else. And my pears aren’t great keepers, not that I’m getting many of them either.

Thanks for the tidbit from your uncle. There’s so many variables to understand. It takes generations to figure a lot of it out!

Speaking of grandfathers, mine on my mother’s side died at age 72 while pruning a large tree, cause never established. Not what I have in mind for myself, mind you, but there are worse ways to go! (I’m 72 myself now, and my wife never lets me forget it every time I get a ladder out.)

Hort, my friend stores his apples the same way I do: in unperforated bread bags tightly twist-tied and kept as close to freezing as possible. (Then he goes away for the winter, taking all the apples he can with him, and comes bag in the spring with a fridge full of Wealthies.)