The Liberty I have eaten is a spritely tasting blend of tart and sweet. I like its taste but I think it would be great in pies and cobblers. It had a small crack starting so I went ahead an picked it today. @marknmt 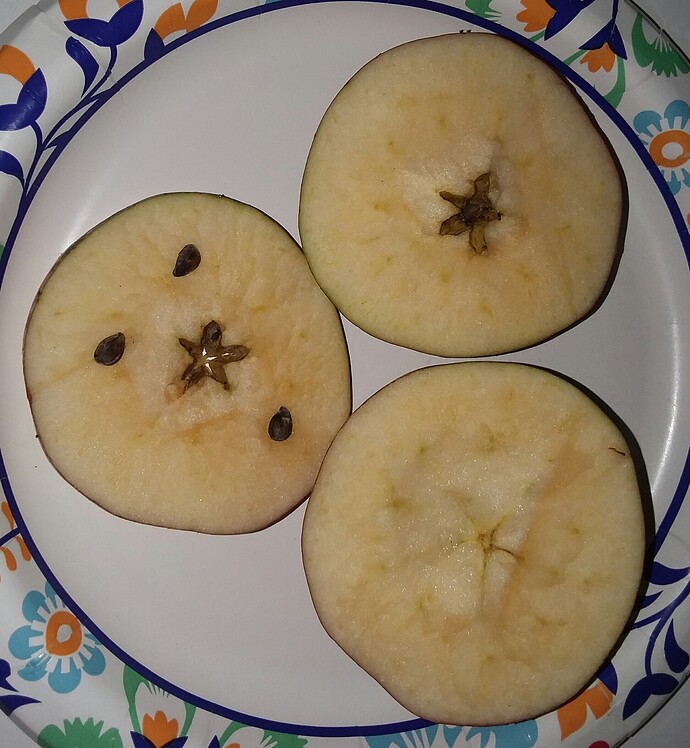 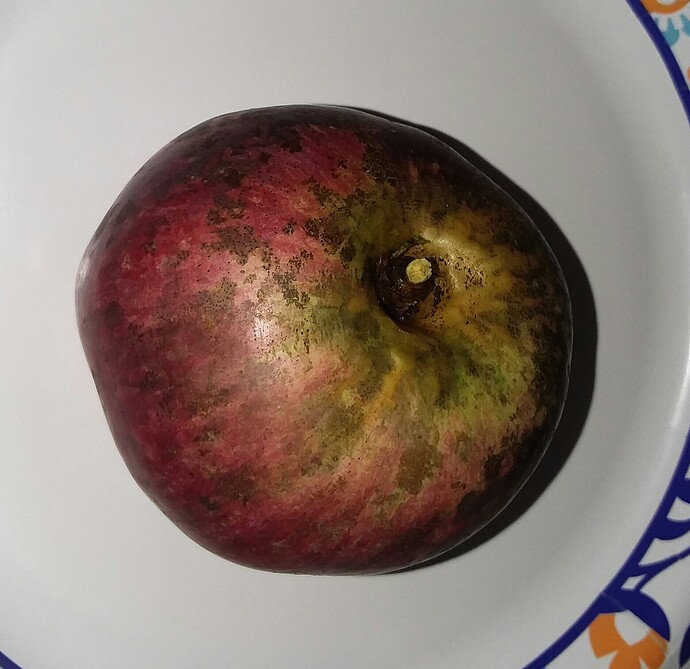 Very cool, Bill. If you get more I’d be interesting in how you like those, too. I think they make great pies and applesauce, and cider as well. Mine are getting close and I’ll probably start picking them this week.

My wife pointed out the face in the second picture …

I hadn’t noticed the face until you mentioned it. I only left this one apple on the tree but it appears to have several flower buds formed for next year.

Was the flesh not very light or was that the lighting? I think I sort of like them better on the early end of getting ripe (when they are first getting a good purple), but before they start getting soft. But, I don’t understand liberty very well…which I should figure out as it’s very productive. It seems the tree can drop apples over a two month period from totally green onward! I should fine it for littering.

Here is my tree a couple of weeks ago. I need to check it as probably has some apples I should eat. I might not have as much worm damage this year. 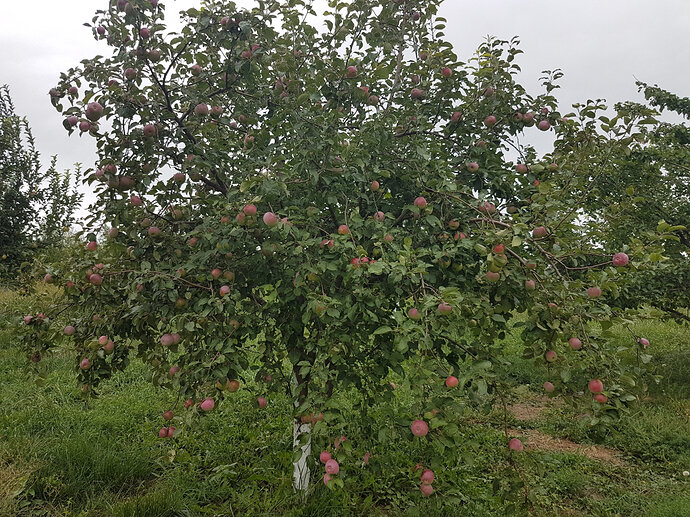 I guess the flesh browns fairly quickly. My bad!

Mine has suffered terribly this summer from what appears to be fireblight. Could be some other blight but… What’s strange is that well known fireblight sufferers like Pink Lady are all around it and have been fine.

I neglected my spraying this spring and lost most of my crop to insects. All the rest were stolen in one night by what was probably a raccoon.

Sorry to hear about your crop @haldog . what kind of bugs did you in? I think we have similar conditions. I have minimal bug pressure on apples here. Peaches are different to say the least. I had FB get into the trunk of my 3yr old liberty in 2017 so I cut it down. I’m not offering that as evidence that it is not resistant, just that I suspect any young tree can get nailed if unsprayed. And there seems to be a substantial amount of randomness to it also.

Several different type of damage @barry, but mostly stink bugs with a little coddling moth. Liberty wasn’t the only tree affected, but seemed the most attractive to the insects. This could have been just random bad luck.

I really like the flavor of Liberty here, but this late season blight has me worried.

I think it was a racoon(s) or possum(s). It happened at night, no branches were broken, even the apples above deer range were taken. Same thing happened to my peaches and pears just as they started to ripen. Next year it looks like I will need to use some traps if I’m going to get a decent crop.

I’m going to my orchard location today…so I hope nothing cleaned me out. Last year no fruit due to late freezes, both years before that, all my apples gone in one night. (Bear scat found nearby.)
Early apples unmolested by anything except an opossum this year…
you see teeth marks in fruit on ground if opossum.

I have doubts if raccoons ate a couple bushels in one night and left zero evidence of the deed. But I might need to get a camera. Last year my sister tried to shoot a raiding bear and gun misfired.