Hi! My family is starting a small backyard orchard, and I’ve really liked everything I’ve learned about keeping trees pruned to a manageable size. I’m also very excited about the possibility of trying out more varietals than I had originally planned by planting multiples in one hole. However, what happens when 1 of the multiples in a single hole dies/gets sick and needs to be replaced? How do you extricate one tree from a multiple planting without harming the remainder? Do you introduce a new, younger sapling into the newly opened space even if the other partners are now older and more established?

Super curious. I’m wholeheartedly on board for pruning to a small, manageable size. Almost onboard for multiple trees in one (who wouldn’t be tempted to try more varieties?? I have dived deep down the rabbit hole of reading everybody’s opinions about their favorite varieties and which ones are prima donnas but still worth the work… haha!) In scouring the fruit growing forums, I realize that many of you replace trees often when they aren’t working out or aren’t tasting right… Super curious how this affects the remaining trees planted & how to replace removed trees when planted in such close proximity. Thanks a bunch!

One thing I’ve learned about planting even two trees in one hole, you must prune the trees against their tendency to lean over when growing against other trees. Peaches will sometimes eventually fall over if the scaffolds are not allowed to achieve balance on any given tree.

I’ve also grown to realize that the worst thing an orchardist can do is try to fit too many trees in too little space. It works fine at first, but as trees grow they tend to require more and more space to get adequate light and air, especially in the humid regions where you are not. Even pepper and tomato plants are more productive if they don’t excessively shade each other- and I mean by the square foot, not just per plant. Shaded fruit and leaves also encourage fungus problems and mediocre quality.

At this point, I think it is best to select rootstocks to achieve the vigor you seek and/or use grafts to get more varieties in less space and that multiple trees in a single hole is an idea promoted by the sellers of fruit trees (and I’m one of them, but would rather sell fewer trees than promote a bad idea).

I’d like to hear from folks from the west who have tried growing 4 trees to a hole AND more traditional spacing for a couple of decades. That’s how long it takes to make a reasonably valid evaluation, IMO. In regions with stronger sun and much less rain during the growing season it probably can work better. I still don’t see the advantage over grafting several varieties to a single tree, however. Except to the tree salesmen.

This concept may work for bushes…but not very well for trees. PawPaws and serviceberries maybe exceptions.

Thank you for sharing, Alan & Blueberry. I always make a ton of trial/error mistakes, so I appreciate you sharing your knowledge & experience. How do mature grafted frankentrees look? For that matter, how do mature multiples in 1 hole look? I’ve mostly seen photos of dormant trees or branches, not fruiting & leafing examples. It’s important to me that the coveted sunny spots on our property look beautiful & balanced. The fruit is a close second

How do mature grafted frankentrees look?

Any way you train them to look. The only way people can tell trees I’ve grafted multiple varieties on is by comparing the hanging fruit.

If you graft onto a watersprout emanating from a scaffold close to the trunk it can be trained to replace the scaffold and once it is established the form of the tree returns to what it was before.

Big stub cuts of scaffolds that are then cleft or bark grafted look ugly for a while.

I did it. The multiple trees are all gone now. No, you can’t replace a tree that fails in that situation.

It wasn’t too terrible as I recall. A bad idea, but not a terrible idea. The duds kind of weed themselves out so there’s that, especially in a marginal environment.

Overall, it’s better to carefully research varieties and rootstock suitable for your area.

I would emphatically recommend planting something tried and true for your area, even if it’s a boring choice. Get ambitious next year.

Be very careful about rootstock. A lot of local nurseries will sell an otherwise suitable variety on an unsuitable rootstock. For example, a Ma and Pa nursery in my area was selling “Redhaven” peach suitable for my Z6 area grafted on “Nemagard” rootstock, a warm climate only rootstock that can’t possibly make it long term in my climate. When I asked the nurseryman about it he just looked sheepish and shrugged. That’s what his supplier happened to send him so too bad for you if you aren’t alert. If your local vendor can’t or won’t tell you about rootstock, go mail order.

Off-topic, but be ruthless in keeping your trees from fruiting until it’s ready. A lot of highly hybridized varieties are precocious, set really really well—-and then stunt out if you let it fruit before it’s a reasonable size. I lost some promising trees before I wised up.

P.S. the idea that “heirloom” varieties automatically taste better is a myth.

Thanks for this info. I really needed to see that practical advice laid out baldly.

I’ll stick with the 3 apples I originally chose & count my blessings with those. Each will be in their own individual location, 8ft apart, and I’ll prune them small starting with a knee-height head cut. Going with M111 stock bc CA is dry, and there’s many successful stories of pruning m111 apples small. As for all the other varietals, I’ll look forward to visiting local farms and friend’s backyard orchards!

It’s exciting to start this adventure!

For example, a Ma and Pa nursery in my area was selling “Redhaven” peach suitable for my Z6 area grafted on “Nemagard” rootstock, a warm climate only rootstock that can’t possibly make it long term in my climate.

Not looking to disagree, just always looking to add to the collective knowledge - I’ve got an ~8 year Elberta on Nemaguard in 5b Denver that’s thriving, even with some of the wild swings we’ve had the last few years.

That said, a lot of local nurseries have no clue about what rootstock they are selling, especially here. Agreed about going mail order when in doubt.

M111 is a good choice for apple rootstock in CA since they can take limited irrigation very well (and don’t grow in these conditions as vigorously as they do elsewhere). However, I don’t think making a knee-height head cut on a young apple tree is a good idea. This is what you do when training a tree to a vase shape, which is fine for peaches but is not a good shape for apples. Apple tree bark is very easily damaged by intense California sun, so this will be a problem for vase-shaped tree.

Denver zone 5b is not the same as midwest 5b though.

Hi Stan. That is interesting re knee height cuts for apples! I didn’t know that apples will sunburn if there’s too much light. I was under the impression that a more open interior will reduce diseases & enhance fruit ripening. I am, however, basing this off reading rather than doing, so truly appreciate the pearls from doers

. I would like to keep my apple trees small enough that I can take care of them without getting out a ladder. I also don’t want to be overwhelmed with gigantic harvests (I’m an optimist). I’m mainly going off the book Grow a Little Fruit Tree by Ann Ralph. She planted this fuji apple, which is growing in ground @ Berkeley Horticulture & is also featured in her book. I took a snapshot of that tree last week and wanted to use it as inspiration. It is about 8ft wide & 5.5ft tall. Fruit aside, I think it’s a gorgeous-looking little tree, and assumed it was alright health-wise cause it was looking magnificent in full sunlight. What do you think of its shape for sun? And is there an alternate way to get a small sized tree without the knee cut? So curious and thanks for taking the time! 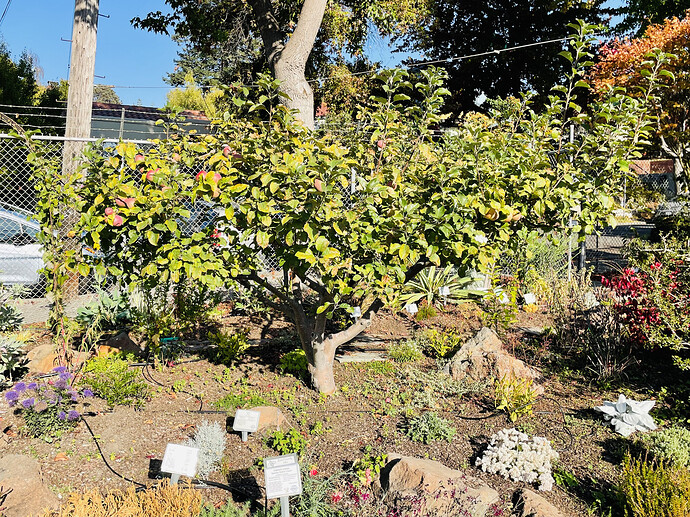 I don’t grow trees for exhibition or to post their photos in a book. I grow them to get fruit of highest quality possible. In my area (Tracy, CA) apple tree bark and fruits sun burn very quickly if not shaded by foliage. On the other hand, it’s so dry here that humidity-driven diseases are not an issue at all. If you’re in a coastal foggy area, it’s a different story.

Hi Stan. Thanks for sharing that tip with me. I appreciate it! I’m over in 10a, not too far from Tracy.

Nevertheless, with care, a tree can be trained to open center or modified central leader and still provide the same protection of wood and fruit from the sun. I don’t know about decapitating a whip, but I’d be surprised if that encourages sun damage to the young wood based on what I know from years of experience pruning in the NE where cambium scorch is quite common on aggressively pruned old apple trees. I’ve never seen it on a one-year transplant- trees often come topped from the nursery, in fact, usually do.

The point of a managed central leader tree, as far as I know, is to assure as near an equal distribution throughout the tree of light as possible for a slight increase in overall productivity. Ultimately, they require more skill to maintain than an open center tree, because you are trying to keep the shape narrower as the tree goes up while the tree is trying to do the opposite.

Usually upper scaffolds have to eventually be cycled out and replaced as their diameter becomes excessive and they draw more and more sap and exploit the better access to light to out-compete lower scaffolds- at least in the NE. Maybe it is different in the near desert parts of CA.