Looks like a hard freeze is incoming for western WA lowlands

Just pulled up the 10 day forecast for Seattle, and it’s a doozy near the end for the zone pushers: 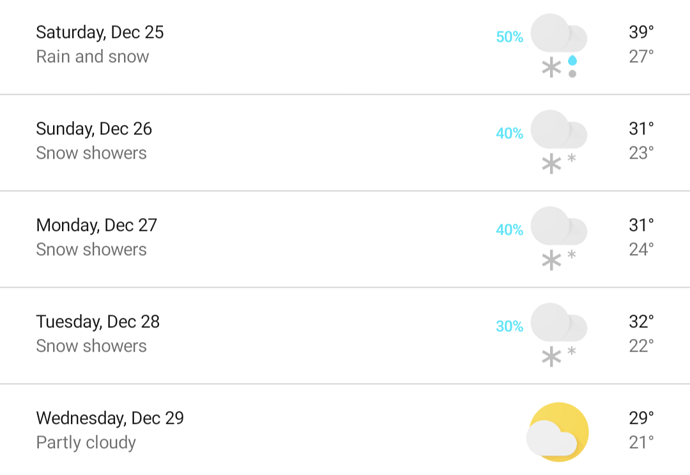 Hopefully there’s still enough uncertainty in the models to rein that in a bit, but I’m definitely regretting some choices I made for which plants to leave outside the greenhouse while out of town for the holidays

The GFS model shows basically no daily high over freezing from Christmas night to the end of the model run on January 5 (the latter 2/3 of that time period is pretty unreliable but still worrying):

Looks like a possibility of some daily record lows, and maybe a week or more without temperatures going above freezing. I’m going to hope for the top 10% where it would just be barely freezing, rather than the most likely or lowest 10%: 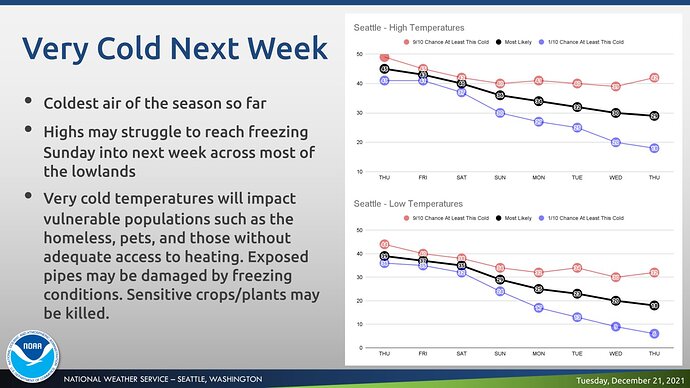 ⚠️🥶 VERY COLD NEXT WEEK Let's check out some more probabilistic data! 🤓 The charts show the range of potential highs & lows into next week. The "spread" increases further into the future ➡️ This equates to more uncertainty in the forecast. Regardless, it'll be cold! #wawx
1 Like
Boizeau December 22, 2021, 3:43pm #3

Forecast keeps trending colder, the coldest night is now forecast to be 15°F! 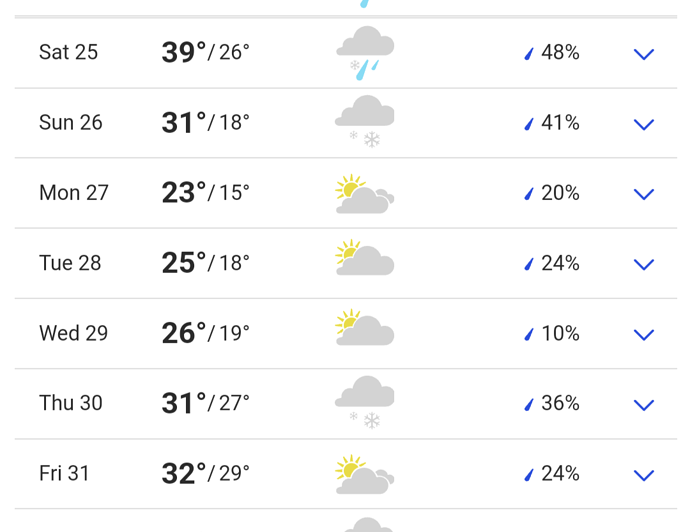 Here is a forecast from Accuweather this morning.It may be updated and changed. 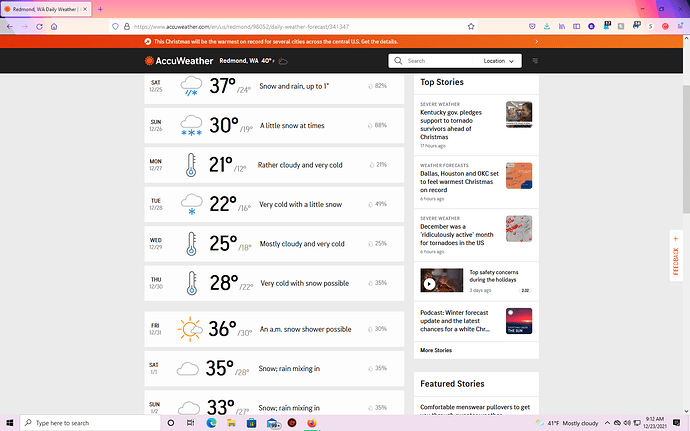 ouch, this extends to Eugene somewhat. I was hoping to more easily carry over my greenhouse peppers to next season but if it never goes above freezing for multiple days I’m not going to spend the money on heat for that long

I was up until 1AM last night covering tender plants with row cover. I’m zone 8b and the forcast shows I’ll have zone 6b temps! I did 2 layers. We’ll see what happens but this could be rough. Curious to see how my 10+ft tall Luma Apiculata and Feijoa do. They are too big and wide to cover. Also jelly palm, large established ugni molinae, palm grass, muntries, yuzu, sudachi, ichang lemon and an 8’ tall loquat. Lots of other tender things but many old and new. I’m sure there will be surprise survivors and casualties.

(which probably just means die, in the case of the 20+ avocado seedlings that are all under a year old). 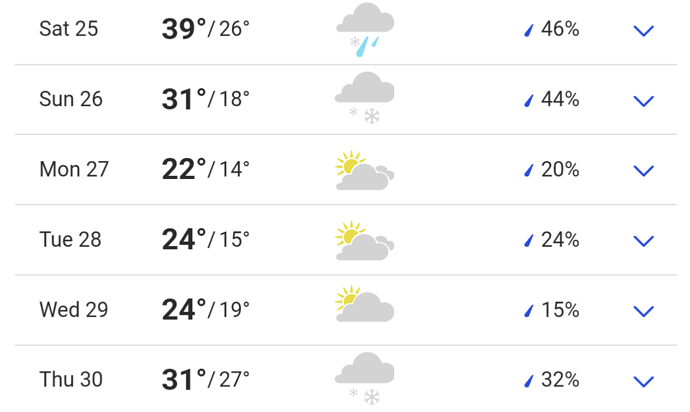 Two nights in a row of mid-10s with low 20 highs would kill most mature avocados, let alone little seedlings. But if any of them survive, even just their roots, then they’ll be great candidates for breeding hardier avocados!

I’m zone 8b and the forcast shows I’ll have zone 6b temps!

That Fraser outflow is a MFer, isn’t it?

If we could stop Monday and Tuesday from coming,there may not be a problem!

A real heart breaker for sure:)

I’m banking on the fact. that the 35’ loquat in the Int’l District must have seen 15F lows in its long lifetime (maybe even the 8F deep freeze that I remember about 30 yrs ago!)…so hopefully no damage to your established tree! I just started 10 loquat seedlings from Seattle tree …Christmas lights and covering may not be enough help! Waaa.

A word to you warm-region ex-pats: Prepare! Assume power will go out and rejoice if it doesn’t. Have plenty of food on hand. Cover outside faucets- use bubble wrap if you don’t have covers already. Open cabinet doors under sink to help warm pipes. We will have slow drips running from faucets to help prevent pipes from bursting. Burlap, bubble wrap, etc. outdoor containers. Google what to do to prep in general. If on a well, take this more seriously. My bud9 potted trees usually made it though just fine. The smaller pots would get insulated by bubble wrap or burlap. Whiskey barrels were covered in leaves.

I used to live on an east facing hill and had an unheated ingroud swimming pool. I used to heat pump house with a serious lamp to prevent pipe and equipment damage that would have drained and cracked the pool. I was lucky. Boy those were the days!

Technically it’s only 8a if the average lowest annual temperature is that low, even 9a can hit that occasionally and keep its 9a status as long as the average stays above 20°F.

Looks like it’s back to 16°F+ as the lowest low in the forecast, but it’ll be interesting to see where it ends up. 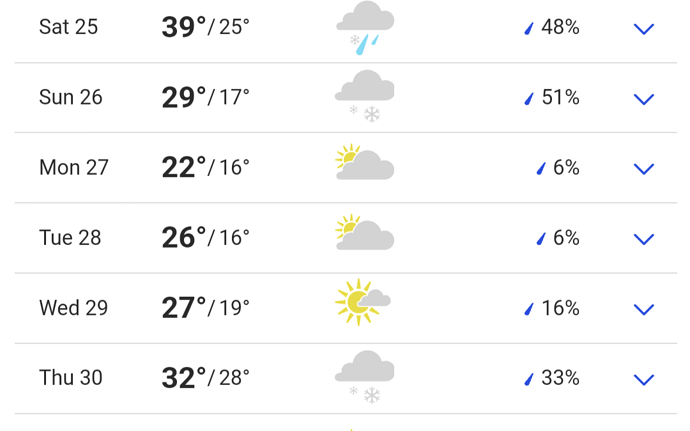 Ah but semi tropical trees don’t care about the “average” low. They care
about the absolute low and length of freeze. The average low in Seattle is above freezing, which means you can grow mango in the ground without protection? I didn’t think so.

I just was talking about the definition of USDA growing zones. You asked if I still thought it’s zone 8b, and yes Seattle is actually zone 9a by the USDA definition, but they haven’t updated it since 2012.

But no, the USDA zone doesn’t determine what can survive somewhere, as we both know. This is the first time Seattle has gone below 20° in almost 10 years, and I’ll be planting another 20 or 30 hardy avocado seedlings in the spring in the hope that they will get another 10+ years before the next killing freeze, so they will be large enough by then that some will survive to be further breeding stock.

Saying Seattle is zone “9a” is a pretty much “doesn’t compute” comparison with Houston 9a.
Houston has 9 months of 90F+ weather and 3 months of cooler weather with a 30 year low of 10-14F but typically just a few freezes each year or sometimes none at all. 300 or 400 chill hours.

Seattle by contrast has only a few days of 90F or higher with typical summer highs of mid 70s and warm temperatures lasting at most 3 months. Making growing sub tropicals in Seattle more difficult is the summer time lows of high 50s. Citrus for example quits growing with sustained nights in the 50s. Chill hours 3,000.

And the USDA zones are once again proven to be useless for the West Coast from Washington to California. The lesser known Sunset zones are more accurate for the Alaska current moderated western coast.

Good luck with the avocado seedlings. The February 2021 cold spell in the Houston area to 14F killed my friend’s mature seedling avocado 50+ foot tall tree in Lake Jackson, TX a few miles from the Gulf Coast. Planted in 1990. Or should I say likely killed. It is coming back from the roots but looks sickly.