I’m thinking about adding another loquat to my yard. It’s harder to find the named varieties with known fruiting qualities than one might think! Most of the loquats out there on the nursery market are seedlings intended for ornamental plantings. Anyway, I’m looking at possibly adding an Early Red or a Vista to my orchard. At that point I will be open to grafting in more varieties into what will be my two trees. (I already have a Gold Nugget.) Anyway, between the two I’m looking at adding, does anyone have any recommendations? A question about Vista is whether it’s self pollinating. I can’t find much info on it beyond the fact that its supposed to be a late “white” variety. Any variety information folks can offer will be welcome. I know that an issue with Loquats in Georgia is that our winter will get the fruit fairly regularly. God bless.

If Early Red ripens January/February in California I don’t know what the time frame for Georgia would be but wonder if a later fruiting variety might be a better choice?
https://www.crfg.org/pubs/ff/loquat.html
I love loquats! Have one called Big White and another called Sweet Crisp that I got from a CRFG member, can’t wait for them to ripen.
Good luck with your decision!

Just fruits has one called Christmas which they say sometimes ripens in December. That’s a huge advantage in that most of our hard freezes happen in January and February. But when talking to the Just Fruits folks, they said that Christmas once regularly ripened that early but now tends to ripen in early spring like the rest of them. Realistically our winters will get the fruit as often as they don’t I suspect unless there is a variety out there that waits to bloom in late February or one that really does ripen dependably in November/December before our harshest weather sets in. God bless.

Loquats are a common sight here and many of them have come up from seed. Here’s one loaded with fruit in my neighbor’s yard. 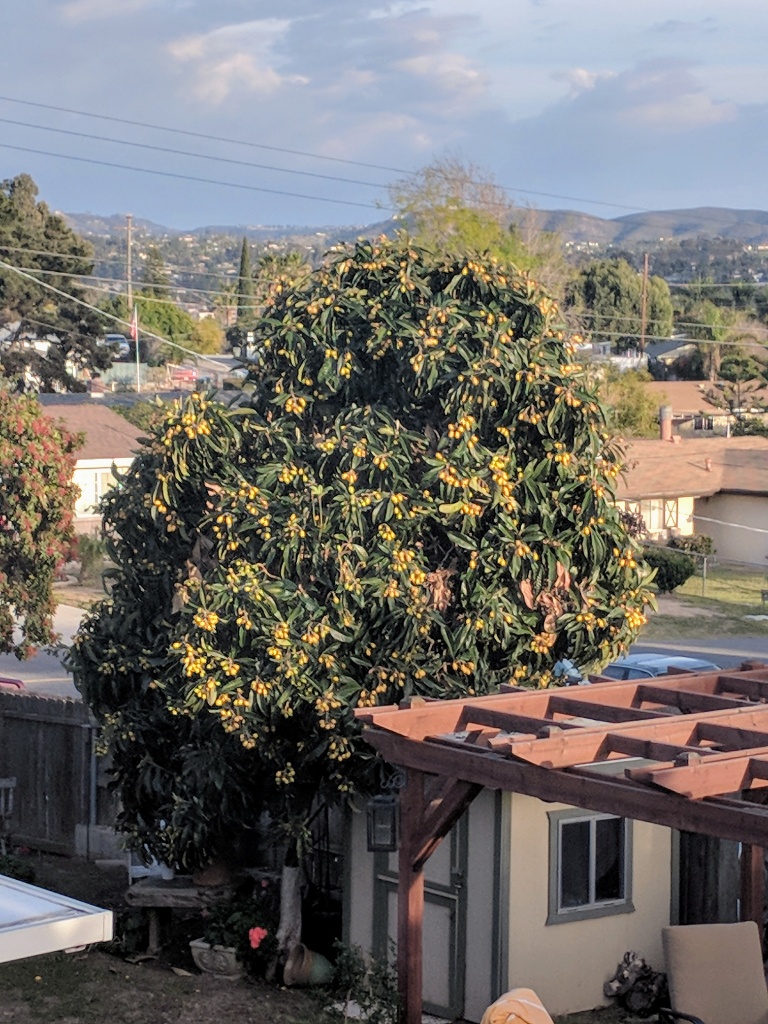 Local lumber yard has some Gold Nugget Loquat. Is it a good quality variety. I have never tasted loquats and thought of growing some. Just wanted to make sure I got a good variety because if I do not like it I doubt I would try another one.

I haven’t had Gold Nugget but this description makes it sound tasty. We love our tree, so little work and drought tolerant!

I have good Nugget, but both of my plants are still babies, and one is from Lowes, so who knows if it’s really Gold Nuget. I’ve never actually tasted a bad loquat. But Gold Nugget is the variety that you see in big box stores the most. That does not mean its good or bad, but it probably does mean that it’s likely kind of a standard.

I have a seedling loquat tree i got from just fruits years ago that makes fruit ranging in taste from bitterly astringent to insipid. So bad loquats do exist

Local lumber yard has some Gold Nugget Loquat. Is it a good quality variety.

How is the fruit picked from that tree or do they even harvest? Brady

I just ate my first ever loquats TODAY… at Walt Disney World of all places. My wife and kid dragged me down here to Florida for a few days vacation. Good grief.

I was surprised to find a large loquat tree loaded with ripe fruit in the medieval section of the park. If one climbs up a four-foot high stone wall, they can reach the fruit. I did so. And then I mis-stepped on the way down… and FELL the whole way down to the concrete flat on my back! The only thing that hurt more than my back was my pride. I took out two parked baby strollers on my way down. Thank goodness they were empty. I was mortified. Dumbest thing I’ve done in I can’t remember how long.

No one else seemed to know it was a loquat tree. They must have thought me completely crazy.

Anyway, the loquats were delicious. They resemble apricots, and taste of apricot and mango. Very nice.

Folks say loquats are hosts for the fireblight bacterium, so if your main objective is to grow apples or pears, you might want to think twice.

I guess loquats don’t like the cold, which can outright kill them.

Just found some more outside my hotel room. 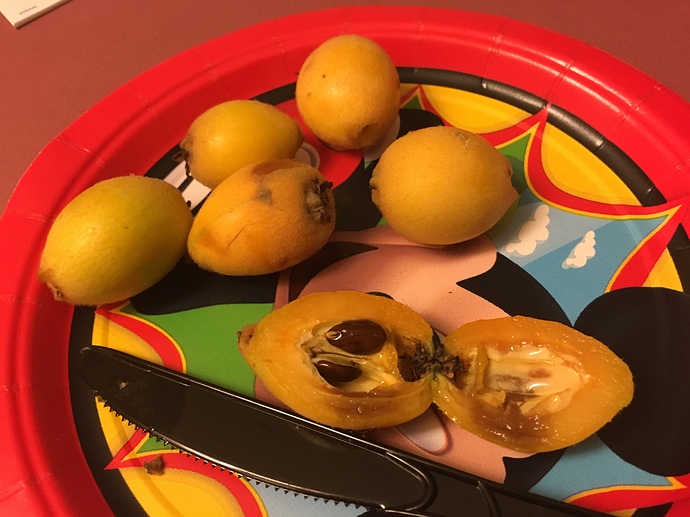 Wow small seeds! Must be very tasty combo apricot and mangoes. Some that I have tasted are towards pineapple.

Loquats can be destroyed by fireblight, most of the varieties are fireblight susceptible. The only reason why most in our landscape has survived is not because they’re resistant, but they have avoided the fireblight by blooming out of season with the apples and pears. But when there’s a bloom overlap, and it can happen depending upon the winter weather pattern, they’re going to be hit hard with fireblight. They are susceptible hosts of fireblight, unlike the Bradford pear, some roses and mums that can really be unaffected hosts.

Also the sap sucking insects with long proboscis, aside from the bees can easily transfer fireblight.

The one I sliced open for the photo had small seeds. The others had the larger rounder conventional (pollinated?) seeds.

Loquats make one of the smoothest wines. The flavor and color is similar to that of a Scotch Whisky, albeit at lower alcohol content.

Folks say loquats are hosts for the fireblight bacterium,

I pulled mine out for that very reason. Major fireblight strikes almost every year. I didn’t want it infecting my apples and pears.
I like the flavor but considering the space that the tree used, I get better production per area with other fruits.

A lot of loquat varieties are self fertile but not Vista White.

I was just about to post to see if anyone knew if Vista White was self fertile. I have three loquats and this is my first year to get flowers. And, its on the vista white!!

So sad that I still might not get any actual fruits. A neighbor has a baby loquat, but I’m not sure if her tree has made flowers yet.

The loquats here are usually done blooming by Christmas.

I’m in DFW. All the loquats that I’ve spied are flowering now. Another friend has a loquat, so I clipped a few branches with flowers and brought them home. Fingers crossed!!