Here are my latest attempts to cutting down on weeding and having to remulch every year. I put a layer of wood chips over the trees at planting and have come back later and covered them with the fabric. I may put some pine straw over the fabric but from past experience when the fabric gets covered with wood chips, the next year the chips break down and weeds start growing on top of the fabric which defeats the purpose. I get the 4 foot rolls of fabric from Sam’s Club for pretty cheap. My goal is grass cutting without having to get off the riding mower and avoid using the weedeater as much as possible, so far, is so good.

Chris, do you have imported fire ants there?

I would have left this post at that one line, but realized you might think it was way off topic. lol The reason I ask is because the black fabric looks like something they would love to set up camp under while they build enough forces to conquer their universe, evil monsters that they are. (And painful, too.)

Chris,
Unless that fabric is commercial grade, and it doesn’t look like it is,
it will break down over a short period of time and the weeds will grow
right through it. I’ve been there before.

There was a time when people were doing more experimentation with weed control. For the most part now people are accepting it. It adds a lot of work to gardening or fruit growing. I remember someone spraying hot vegetable oil mixed with something for weed control. I’m doing my mowing from a rider and throwing the clippings as I mow on my bushes and trees. So basically as I start mowing in the middle of the row I work progressively towards the row cutting another pass at a time. Finally all the stuff I chopped down winds up being mulch for my plants and they use the moisture and nutrients of the vary things trying to choke them. Currently the mower is not working but summer is over here.

I live in the suburbs so finding free material is not always easy. Halloween is over and many use bails of hay for decorative purposes so trash day I patrol the neighborhood. I scored one nice pot and two large bales of hay, the last trash day… I also saw two houses with bales also, so will be watching next trash day. Sometimes low grade hay is used for this purpose and will have seeds, mostly weeds in it, but weeds are everywhere anyway. It’s free organic material. I also save my leaves. I have like 10 bags so far. I cover my brambles as most are not hardy here. I’ll wait on that until i spray with wilt stop in December.
A pain to store all the bags though. I have no compost pile, I need to have one!
As far as weeds I just use roundup around the trees, well not the brand name, other products that often have much more glyphosate than roundup.
Chris instead of using the fabric you could use cardboard. i hate throwing anything out so I often strip the boxes of tape, and plastic and put in it my garden beds covered with compost. It degrades in a few months although lasts long enough to stop spring weeds. I often have to cut through it to plant in it, but not a big deal.

it looks like a great idea. My attempts at weed control with cardboard and mulch only provided more cover for an out of control rodent population.

Using compost first may help keep the rodents out. Compost can be used as a mulch. I myself put pine straw or hay over the compost. As I can get both free. It helps keep it in place. Plus supplies some nutrition to the trees. I also like to feed young trees, for a few years. I just use Tree-tone. I mix it with the compost. My trees had a manganese deficiency, or at least I thought it was. The photos of leaves deficient in manganese looked like they used my leaves. The next year after adding manganese sulfate to the compost, and foliar spraying in the spring eliminated the symptomatic leaves, so it was a manganese deficiency. So every winter or spring, or whatever I get to it I add it.

Muddy, I have not noticed any ants congregating around or under my fabric. The fabic looks to have a 3-5 year life span which works for me, a 300’ roll was around $30 at Sam’s Club. I bought a box of 1000 6 " landscape pins to hold it down from Amazon for pretty cheap. Since those pictures I have covered the fabric with a light layer of pine straw which makes it much more visually appealing. At my place any bare ground will quickly be covered by weeds during the growing season and fabric has resulted in less spraying for weeds so the fabric is working for me.

I have used landscape fabric from Costco. It is grayish color.v the picture showed it on one end. I pulled out as much weeds as possible before putting down the fabric.

I put mulch on top for look and to keep the fabric in place. It was done 3 years ago, the fabric material has not yet shown sign of breaking down. Since then, that area does not look like a field of weeds anymore. 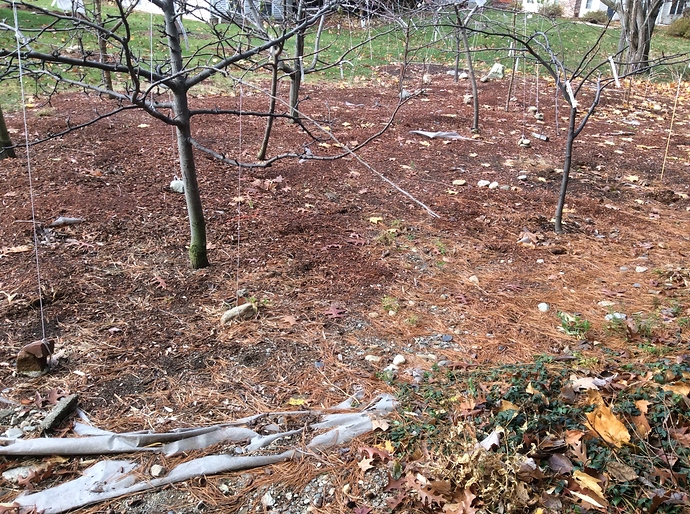 Looks good. Now I wish I had not got rid of all my rocks. Bill

Auburn,
Everywhere I dig, there are rocks. Wish I could ship them to you.

I tried mulching my trees with both pine bark mulch and bark mulch with and without landscape material. I found it broke down so quickly I had to mulch regularly. Mulch can also attract rodents and such. . This year I tried something new. When I planted new trees, I use landscape cloth (air and water permeable). I then used crushed stone for mulch. The stone holds down the landscape cloth so staples are not needed. It won’t break down, and I should not encourage rodents. It is a bit more work to install but it should be a one shot deal (I hope).

My trees are out on a pine farm, so I just used the same crushed stone we use for the roadway. However, if your trees are in a location where looks matter, you could use any kind of decretive stone.