My zone is 8a and I’m in the Pacific Northwest, west of the Cascades. My goal is for an organic/biodynamic garden.

Instead of posting my questions individually I thought I’d make a master thread. Of course I’ll try to research the problem or question as much as I can before posting here.

First question, is it okay to have four cordons on a hardy kiwi vine on this type of trellis? 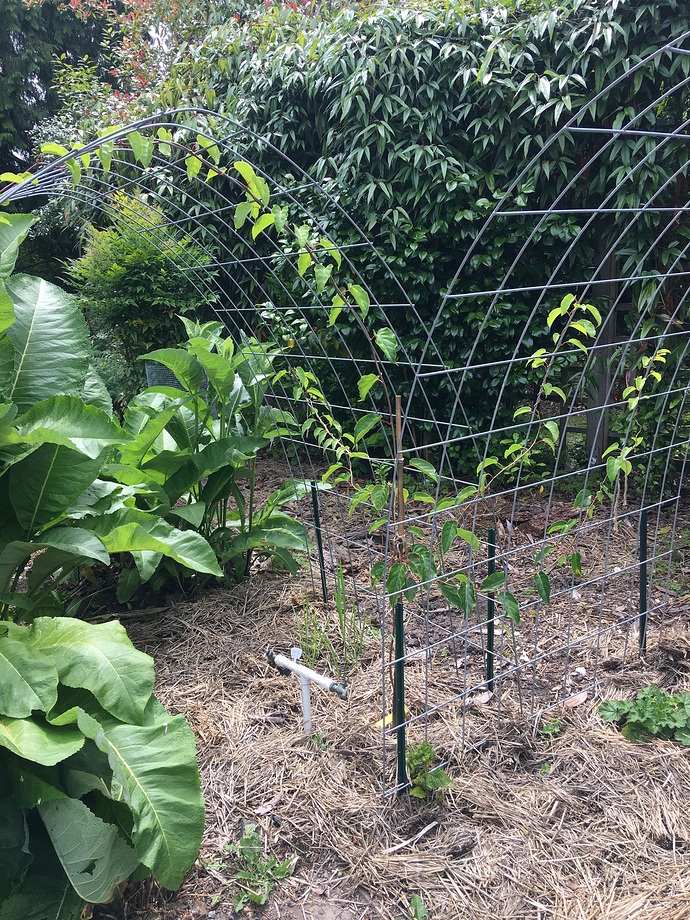 Someone told me that having two cordons per trellis would eventually get very heavy and the cattle panel trellis would need some extra support, thoughts and opinions on that?

Also was told to unwind the vines because the cordons would eventually get very thick? 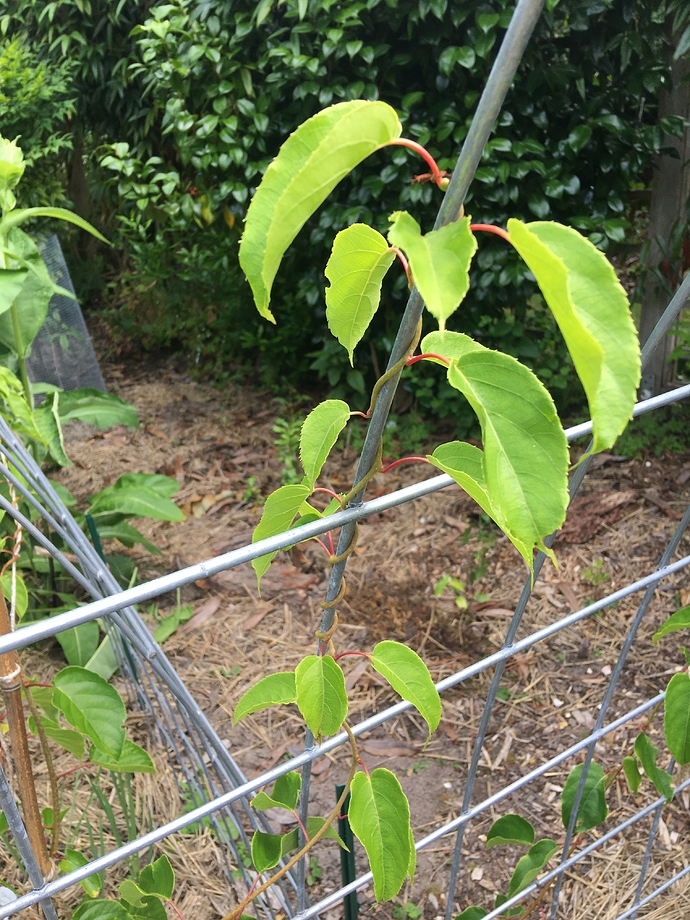 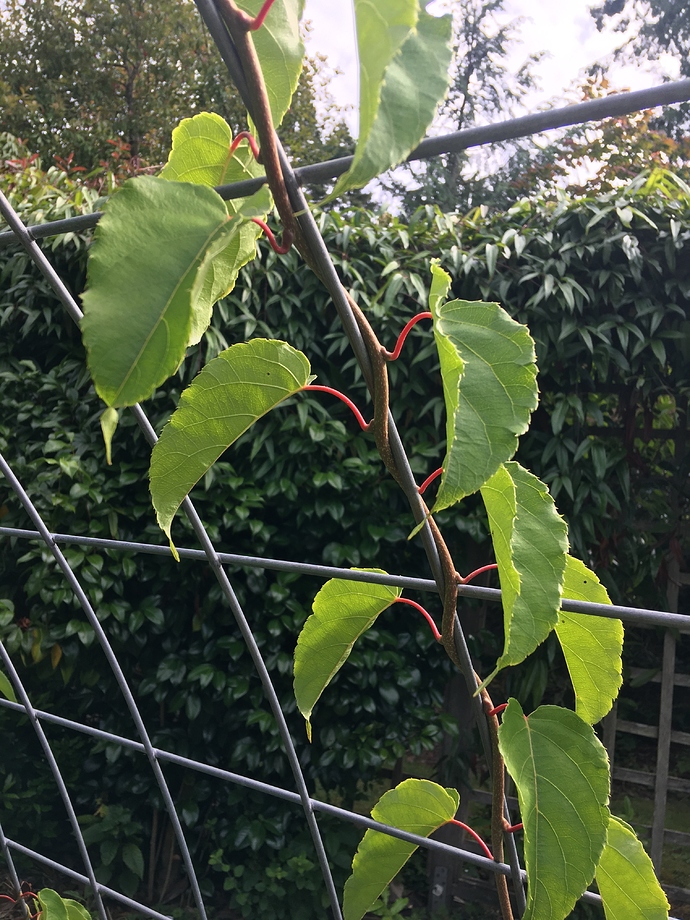 I got a California Wild Grape (Vitis californica). It was an impulse buy and I don’t really have a place to put a good trellis for it, so I want to just let it ramble on the ground. We have a lot of pressure from wild rabbits though. Do rabbits like to munch on grape leaves? I might put some crop cover over if that’s the case. 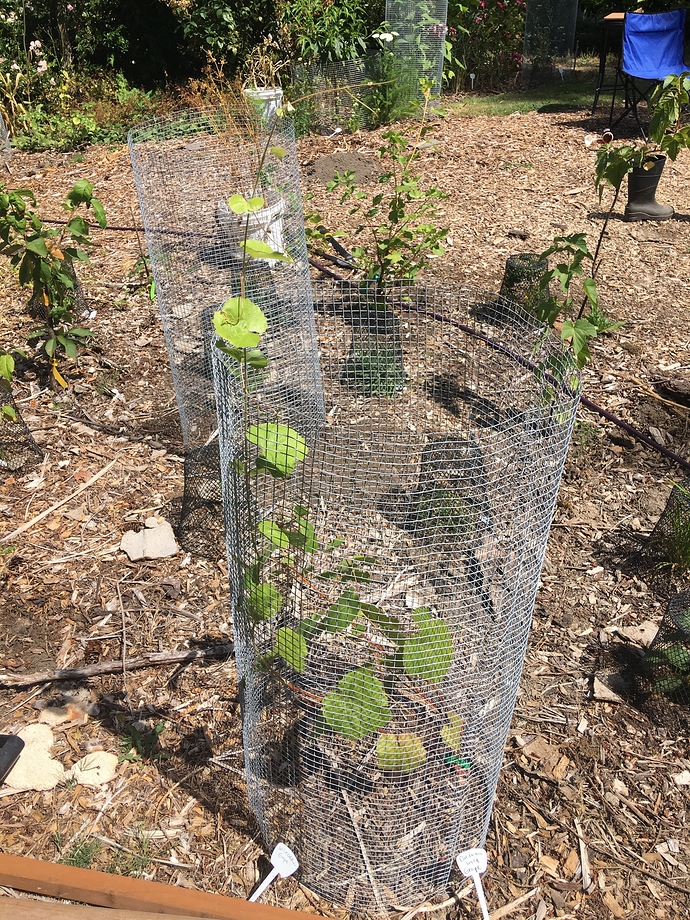 That trellis could get too weighted down at some point but you could add some posts to shore it up. The advice on kiwi trellis is to build them like a tank, I built cheap ones and with a few minor mods have kept things working fine for about 20 years.

Re twisting around the wires, yes you definitely want to unwrap those; you can wait til winter though as it is easier on a dormant vine. Also kiwis will later make stronger straight shoots from the base and you may want to replace these first ones with new shoots.

You can put several cordons on, but if things overlap too much you may want to remove some eventually. The main point is to not get growth too thick overall.

For the grape just train it up a post about 5’ off the ground and let it get a shaggy hair look from there. Prune back to the post in the winter with only stubs of shoots left. This is an ancient pruning style you can still find a few places (coppicing is the name I think). You don’t want vines on the ground they will get eaten by all sorts of pests.

@scottfsmith
Thank you for the advice, I really appreciate it. I have already untwisted the kiwi regimes and reduced them to one per trellis.
What would be the reason to replace them with new shoots from the base next year?
Thanks for the advice to make the trellis more sturdy, I wonder how to do that. I am not very handy.
Will follow your recommendation re: the grape, thank you.

For support just put a post in the middle (at the top of the arch) and anchor it to the wire somehow (e.g. drill a hole through the post and wrap wire around, anything to get the post to hold up the trellis wire at the top point).

That’s so helpful, I really appreciate it!

Babaco trunk issue? I searched and found they’re susceptible to phytophtora root rot but I’m not sure if that would affect the trunk. I have it in well draining soil, and it seems to be doing okay after recovering from pretty bad sunburn after I forgot it in the greenhouse on a hot day.

I’m understand these are pretty cold hardy. I wonder how cold they can survive even if they’ll get defoliated. We sometimes have sustained temps in the teens during the winter here with cold winds (I could plant it in an area that’s slightly more protected). I’m just wondering if it could survive in the ground with good mulching here in the PNW zone 8a. 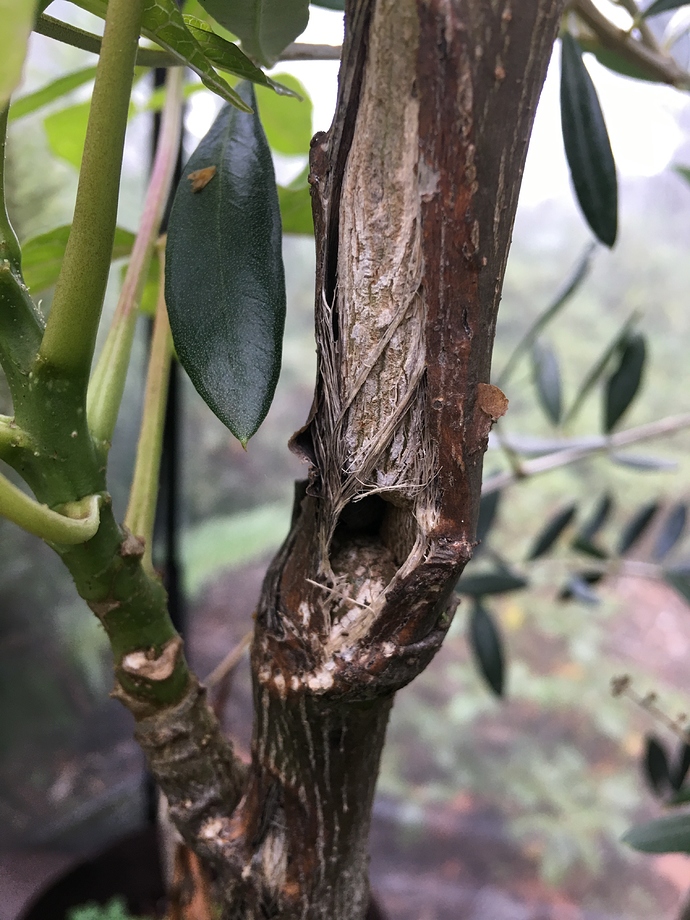 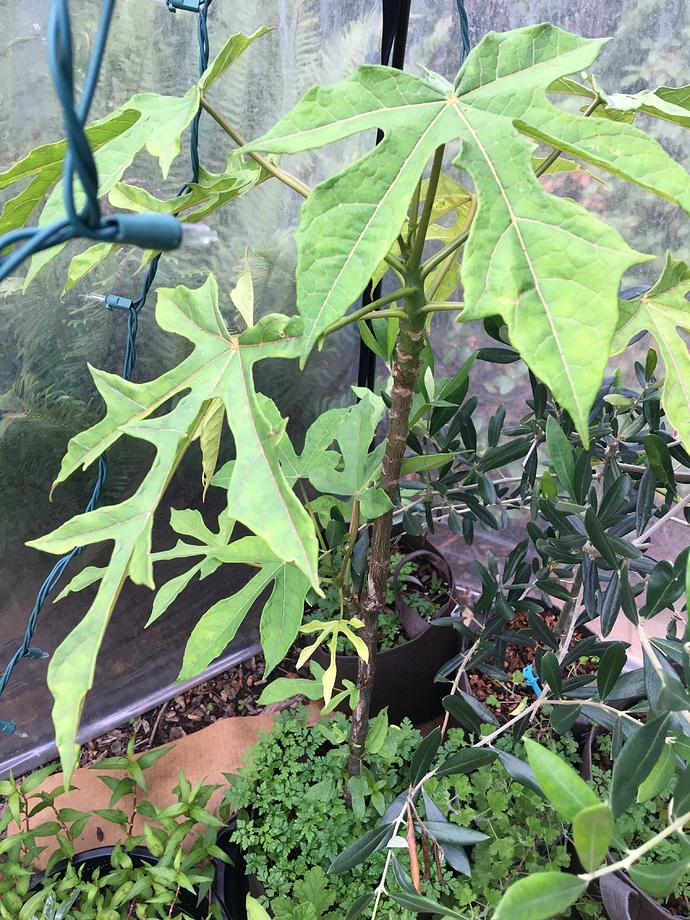