Any biologist who doubts my claims is welcome to debate any topic with me.

@Richard
No such thing as:
“Micro-Endomycorrhizal Yeast”,
much less “Micro-endomycorrhizal yeast symbiosis”.
endomycorrhizal is a type of mycorrhizae.
There are over 1,500 different species of yeast,
none of which are mycorrhizae.
Please stop your repeated harassment & covert attempts to insult my intelligence! 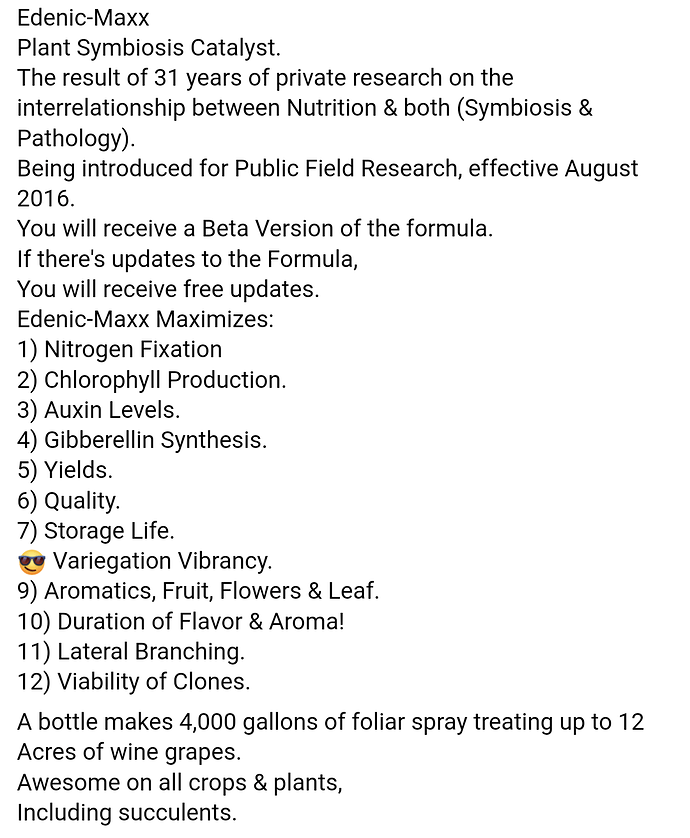 Culturable Yeasts as Biofertilizers and Biopesticides for a Sustainable Agriculture: A Comprehensive Review

Role of endophytic fungal species in plant growth and in sustainable agricultural productions: a review

@Richard
LOL
A Facebook post from many years ago which I thought deleted long ago.
Not a website.
I became licensed for the manufacturing & sell of agricultural chemicals in 2014.
Introduced “Edenic-Maxx” in 2015 & pulled it off the market immediately after very first sale.
The reason was that the first customer lived near Boron California & I realized that Boron would interfere with symbiosis by modifying quorum sensing activities between gram-negative & gram-positive bacteria.
The product worked via FeMo-Cofactor enzyme bacterial symbiosis, plus wild yeast symbiosis.
Some of the main problems with achieving symbiosis is that Iron is used both in Nitrogen fixation enzymes as well as virulence activities & invasive microbe quorum sensing functions.
The use of (Glycerin or Glycerol) to increase the water solubility of Indol-3-Acetic Acid aka Auxin is also problematic.
While Glycerin increases absorption, it also increases Boron water solubility.
Glycerin increases Indol production which is part of the Auxin hormone.
However, the invasive gram-negative bacteria Xanthomonas uses Indol & Ferric Oxide in its virulent pathogenic behaviors.
While symbiotic yeast are stimulated to produce Ethyl Alcohol & Acetic acid, which increase Auxin water solubility & an Auxin precursor metabolite, the wild yeast sometimes have issues at suppressing Xanthomonas.
Add to this complication the fact that gram-positive bacteria which produce Cytokinins stimulating breaking auxiliary node dormancy, can with increased Boron availability produce galls & witches broom effects.
Another issue is that Ethyl Alcohol from wild symbiotic yeast on the plant interfere with Copper assimilation.
To make a long winded story short, I should have considered the possibility of high Boron environments before introducing the product.
It was however immediately yanked & things made right with the 1 customer before they even received the product in the mail.
@danzeb this is stuff that I thought I deleted 7 years ago.
I have not even touched on the Subjects of Molybdenum, Nickel, Cobalt and Vanadium yet.
Nickel especially creates many problems in symbiosis.
It’s enzymes can both (increase or reduce) all facets of (nitrogen fixation, conversion & assimilation), as well as copolymerize many micronutrient ligands, as well as trigger virulence of some microbes.
The effects of Nickel & Nickel enzymes on symbiosis & pathology fluctuate dramatically with pH, concentration & valence state of Nickel.
Nickel has 7 valence oxidation states & many environments either have way too much or too little of it.
It’s ability to copolymerize (Zinc Ligands) into a temporarily unavailable strong ligand polymers poses many problems for species which require high Zinc levels like pecans, almonds & grapes.
After close to 4 decades of study & experiments, I’m still not even close to doing field tests in locations other than my own yard when research experiments can be daily monitored.

Roles of Bacterial Symbionts in Transmission of Plant Virus by Hemipteran...

@danzeb
I’m able to download both articles from the above links.

I was getting a 404 error message but it is now working ok.

@danzeb @Richard
Some of the main obstacles to symbiosis are:

@Richard @danzeb
Boron & Iron play major roles in quorum-sensing aka “QS” for both symbiotic & invasive microbes.
The pH, valence & form of the nutrients greatly modifies what happens Boron can be a quorum sensing catalyst at helping microbes fix nitrogen, as well as stimulating invasive pathogenic virulence by some microbes & inhibiting such behavior in other microbial species.
Same sort of dual nature for Iron.
I have not read this article yet, but it is about the role of Iron & Boron is QS activity.
Like most articles on the subject it is probably very incomplete & will conflict with other QS research articles.
The problem is QS is very complex & what happens often depends upon pH, the amount of Nickel present & Nickel’s valence state.
The presence of other nutrients & metabolites like (Indol, glycerol, acetic acid, thiol, sulfhydryl, Molybdenum, Cobalt, Vanadium, Iodine, etc), often modify the activities of both (Boron & Iron) in QS.
The article is most likely highly deficient in information.
But looks to be an easy to read article about QS & agriculture.

Shoot the Message, Not the Messenger—Combating Pathogenic Virulence in Plants...