it’s only a few years old, but it’s about 7 feet tall. I’ve got two smaller, year and two year old trees near it. the big one is from a mother tree that produces berries, I’m pretty sure it’s a hybrid red/white? it was a sucker taken from that tree a while back.

I’ve been trying to get a fruiting rubra for like two years with no success, the one I was able to buy died within the year (we had a heat wave and it wasn’t established enough to handle it).

I’m not sure if I should pull a 7 foot tree out, and try another, or if there’s any reason it isn’t making berries that I can remedy. any advice from seasoned mulberry folks would be much appreciated. all I know about them is that I like to eat them, and this one isn’t happy. 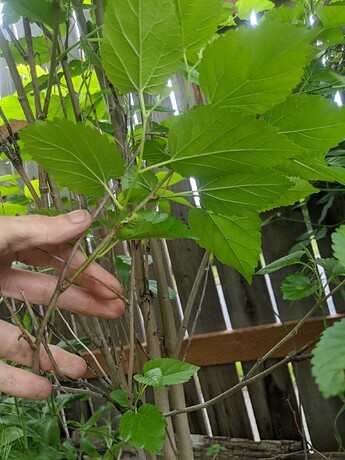 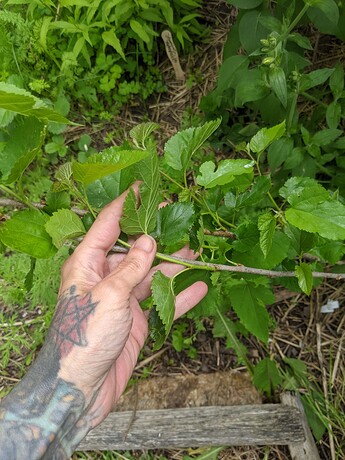 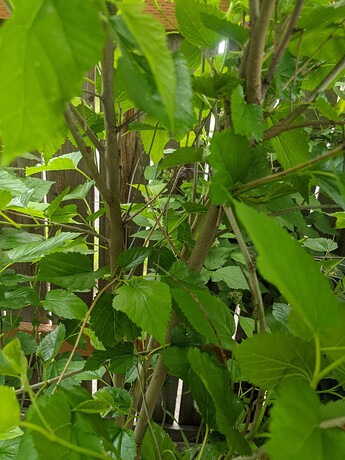 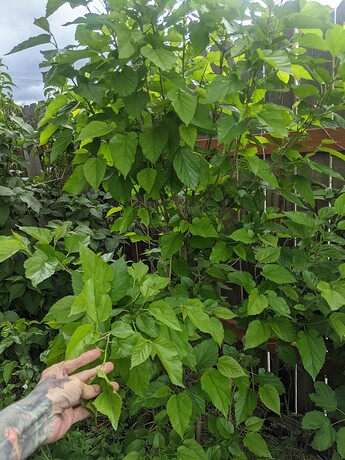 here’s some photos of the tree. I posted about it in another thread but I’m still not really sure what to do with or about it.

If you grew it from seed it could be male or self-sterile.

it’s from a sucker, a branch that grew from the lower trunk of a mother tree that produces. the owner rooted it, potted it then later passed it on to me. it’s probably 5 years old or so, but I’ve had in the ground for I think 3 now in this spot.

I’ve never tried to grow these from seed.

Probably the mother tree was a grafted tree and the suckers you got are part of the rootstock which might be male or nos fruiting.
You can still graft your tree with fruiting scions!

Probably the mother tree was a grafted tree and the suckers you got are part of the rootstock which might be male or non fruiting.
You can still graft your tree with fruiting scions!

it’s a wild tree, not grafted, the mother. this is why I’m stumped

I could graft yes I may do that. it’s a pretty healthy tree all other ways

Thats odd so, especially being a few years old already.
Try to give it a few high dose of fertilizer but with less values of nitrogen and plenty of sun exposure as a last attempt.
Otherwise being an healty tree graft it

I’ll fertilize it, and graft it in the spring too. it’s really weird all things considered

Mulberries on their own roots will always take longer to fruit than grafted. I’m having a similar problem with one even older than yours.

You can keep on trying for 2 more seasons @resonanteye but all my mulberry varieties propagated from cuttings or airlaywlers usually they immediatly set some fruits on the first or second seasons, few, but they set and then from the 3rd year on big crops, thats why its weerd. But you can give a few more if you wish.
If it was me i would graft it from now on.

My weerd one is pakistan, 5 years on ground, big tree and sets tons of fruits and by the time they should be mature i check the tree and none on… might be birds though… lol
Now i have several different sources of pakistan and other macroura or elgongated ones like himalayan and taiwan long also and i’ll see how those behave

If it were my tree I would graft to another variety and keep a couple of the original limbs. If the original doesn’t work out it can be cut out later.