Last year I added a bunch of varieties onto my Red Anjou pear. To my suprise, most of them will be blooming this year from the terminal bud. I guess being kept horizontal encouraged flower formation! I won’t be surprised if I get more fruit from the grafts than the mother tree. 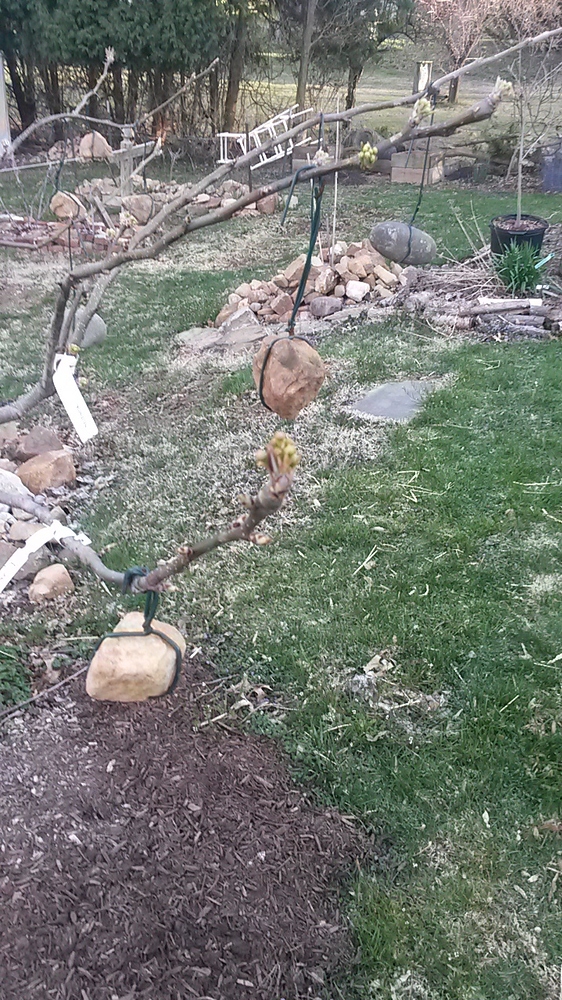 Nice pics. Do you ever have any trouble with weights hanging freely from the limbs? I’ve heard there is concern with them bouncing during windy conditions and potentially breaking the limb. Last year I pulled some branches down and was advised to tie them down to an anchor in the ground or to an underlying branch or scaffold if possible.

I’ve been hanging rocks for a few years, haven’t had any trouble yet. I usually hang them in summer before the branches have really stiffened up.

I think you have an un-eatable “stone crop”…

I am experiencing something similar on my multi graft pear. Are the pears you have blooming European or Asian?

There are both Euro and Asian grafted, but it seems like the Asians are blooming more than the Euros at this point.

Top working rules! A friend told me I could save ten years(to harvest) by top working pears as opposed to bench grafting, growing out benchgrafts… also, asian pears are in general more precocious than European.

None of my European pears that I grafted last year are blooming but two of the Asian varieties are.

Those are looking good. Those should make a lot of good quality fruit. Its good your testing and strengthening those branches with rocks because a pear like duchess d’Angouleme does put a tree to the test. Its a branch breaker due to the size of fruit. In this area they break branches yearly due to the excessive weight which far exceeds rocks. Great pear but think twice before you add it in a windy area. I support my pear and apple branches when they get to loaded.

Since every peach or plum tree here eventually gets insect damage, maybe I’ll just change over from these stone fruit to what you’re growing with rock star results.

I now have four multi-graft pear trees. It sure is easy for the pollinators to do their job when they only have to go a few feet to exchange pollen. Bending down the limbs has been the magic bullet to earlier fruiting. Bill

Rocks also do very well in the ground. I get large yields where ever I dig

What type of pest pressure do you have to deal with for these?

So far only a tiny bit of blister mite.

How to you treat blister mite? My pear tree started having this pest last year, I need to do something about it this year.

Scott Smith gave me the best advice on how to get rod ofpear blister mites.
Spray with lime-sulfur at about bud break.

I tried sulfur. It did not work. Gotta be lime-sulfur and the timming has to be right. If it is buds are too dormant, it is not as effective.

I sprayed with all season oil.

Thanks, My tree buds has not break yet but is growing. I just spread Bordeaux couple of days ago which is lime and sulfate solution on the tree , Does this work?

I also spayed neem oil couple of weeks back, will this work?