Have you ever eaten frozen grapes? They make a really refreshing snack. I have not done it with Muscadines . . . but other table grapes.

I never started growing fruit/muscadines to make a profit off them. Not that I’m opposed to selling some I just don’t have enough space to grow enough to make it worthwhile. I have considered doing some swaps with vegetable growers. I love vegetable but I don’t love growing them like I do fruit trees.

We have a produce stand less than a mile from my house and I get tomatoes, squash etc from him. He told me that he could sell some of them but I think I would rather just trade for tomatoes.

We also have a farmers market for locals and I stopped by today and bought tomatoes, squash. Almost all the sellers have a nice group of fresh picked vegetables. The requirement to sell at the provided area is that they are local and grow all the produce they sell. They are only open one day a week.

Have you ever eaten frozen grapes?

I didn’t get into the business of making a profit either and I have and will continue to give away large quantities of fruits and vegetables. I don’t think as small a scale as what I have would define making a profit but I do hate to see fruit/veggies go to waste and it would take me to the people shopping for such that might use it.

There are a lot at ours that have purchased veggies…not local. There are some good local stuff once the season gets going but those that offer tomatoes in May here did not grow them here… just saying.

Seedless grapes are really good eaten frozen. For the last two years I have frozen muscadines and they are good tasting to me but you do have seeds. My seedless muscadine (Oh My) didn’t have any fruit this year but next year it should start. If I like them my current plans is to freeze some for eating frozen and to make some jelly and jam. Should be easier when not having to deal with seeds.

There are a lot at ours that have purchased veggies…not local.

Same here, and they don’t tell you unless you ask. Rubs me the wrong way.
Here are my Ison and Darlene vines (but hey, if you’ve seen one you’ve seen em all!)

They look nice and healthy.

Darlene and Ison make fantastic vines. Ison just wins out in the fruit production! Muscadines amaze me every year with their growth. Looking good!

If I like them my current plans is to freeze some for eating frozen and to make some jelly and jam. Should be easier when not having to deal with seeds.

In my opinion based on nearly 10 years of making jelly/jam out of grapes it does not make a bit of difference if the grapes are seeded or seedless as far as the process is concerned.

After mashing up (or putting them thru a food processor) and heating up the grapes the skins and seeds are strained out. Of course a steam juicer can be used in place of straining but again it does not make a bit of difference if the grapes are seeded or not. Any seeds are always thrown out with the skins.

Last year I began first staining my mashed up grapes thru a couple of layers of cheesecloth and then putting them thru the steam juicer to try to get every last drop of juice. I did this because of the concern of nutrients being cooked out of the juice by the steam juicer.

One year I did try to make grape jam by using the skins following a recipe. First just separate the skins from the grapes (I was using concords at the time) and chop them up with a food processor. Then after the seeds has been lightly strained out of the leftover grape pulps (would not have to do this if using seedless so in this case it would be easier) combine with the chopped up skins. Then I just cooked up the jam as I normally would. But I hated the resulting grape jam with the skins. So I do not recommend making grape jam using the skins(and I think that it would be the same with muscadines). With that being said I did can some plum jam including the skins this year that was excellent.

Technically the grape jelly that I make is never jelly because I do not strain it that hard. Real jelly is clear and my jelly is never clear so it is actually jam. It always has bits of fruit in it.

I encourage you to cook up some jelly/jam this year using your seeded muscadines. Just throw the seeds out with the skins. Please don’t cook up the skins in your muscadine jelly/jam.

Send out some pictures when you make it next time.

Hoping to get a sample of my wild muscadine. They are about the same size as my Black Beauty and Supreme.

Wow, I’ve never seen wild grapes of any kind that large. I don’t understand why I never see fruiting grape vines around here.
In fact the only fruiting wild grapes I’ve ever found were in Fort Walton State Park in Florida.

I have a couple of questions. How often does everyone water the vines or is it necessary to do so. I noticed some browning around the edge of the leaves and I was wondering if it was due to a lack of water or I may have placed fertilizer to close to the base of the vine. I have been following Ison videos and doing what he recommends. I also noticed that Japanese Beetles are eating the leaves. They did not do this last year. I have Supreme, Black Beauty, Sweet Jenny, Ison and one I lost the tag on. Some of the vines have been in the ground 2 years and some this is the third year. 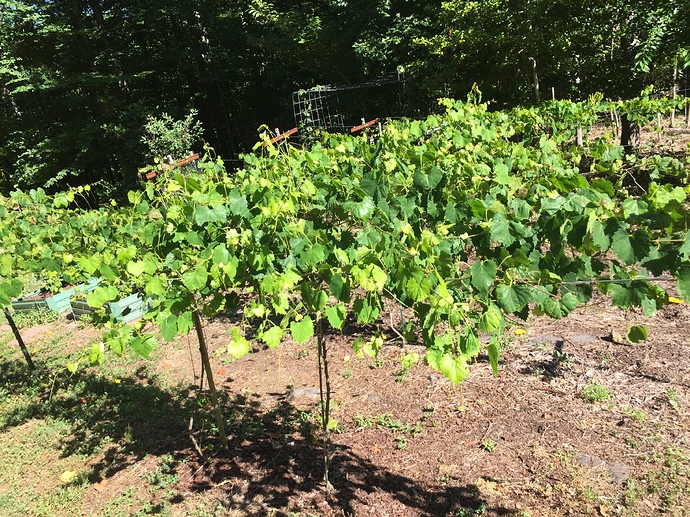 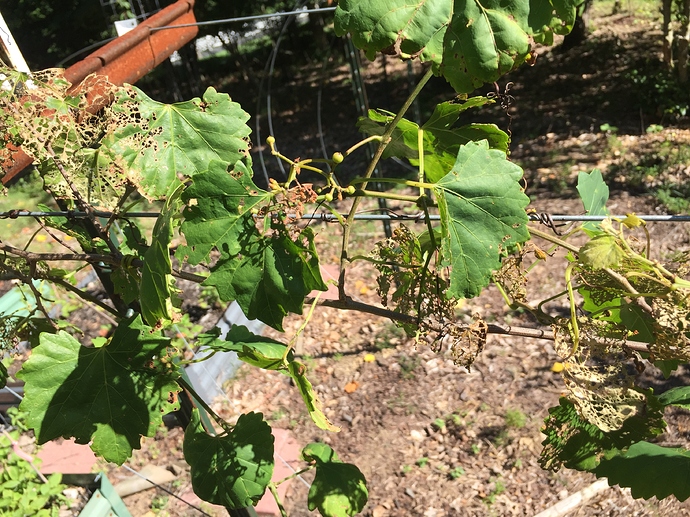 Hey Dave,
In my humble opinion the vines don’t look particularly stressed. I have definitely had beetles and leaf cutters damage my leaves, so nothing shocking there.
I believe muscadines like ample moisture (not “wet feet”) and I do water mine some in hot dry spells.
As long as you kept fertilizer a foot or so from base of the vine you should be fine. IMO

Muscadines definitely benefit from irrigation IF soil water is low. Ison used to have a blurb about setting up irrigation, not sure if it is still on their website. That said, browning around the outer edges of the leaves is almost always caused by something wrong in the soil. It may be from accumulation of salt, or high PH, or possibly from over-fertilizing.

I use Pyganic to control Japanese beetles. It is equally effective on muscadines and on green beans. Within 15 minutes of spraying, most of the beetles will be on the ground twitching and dying.

Thanks. I will look for Pyganic.