This was only my second attempt at apple grafting. Last time was 2 years ago and none of them took. Basically I didn’t know what I was doing. However, thanks to growingfruit.org and all the helpful folks here I’m feeling much more confident about my chances for success. If these work out, I plan to try more in the future. Who am I kidding, I’ll probably try again even if they don’t. Thank you to @JesseS for the Roxbury Russet scions…

All of the wood was about a pencil in diameter and cut so there were two buds per piece. I used the whip and tongue, wrapping them up tight with electrical tap and sealing with tanglefoot…I grafter on piece of the Roxbury Russet onto each of my trees, 2 Dorsett Golden, Gala, Big River and Joys. These are all low chill warm weather trees so it will be interesting to see how the Roxbury respond.

grafts were done about two weeks ago. Here’s how they look today…While I’m not sure how they’ll pan out in hot humid Florida, I figured it was worth a try. 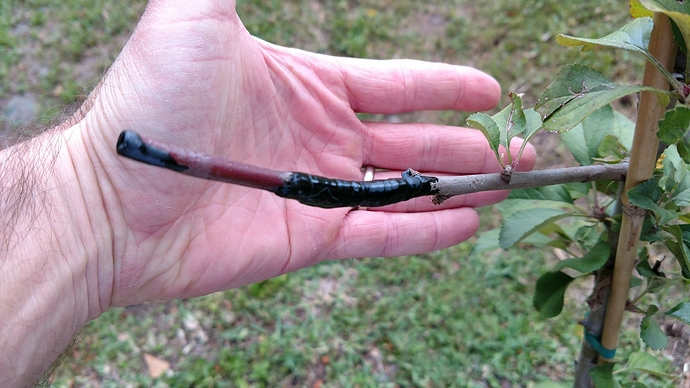 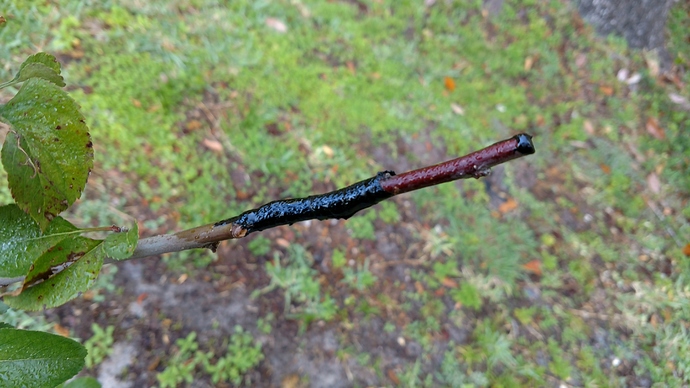 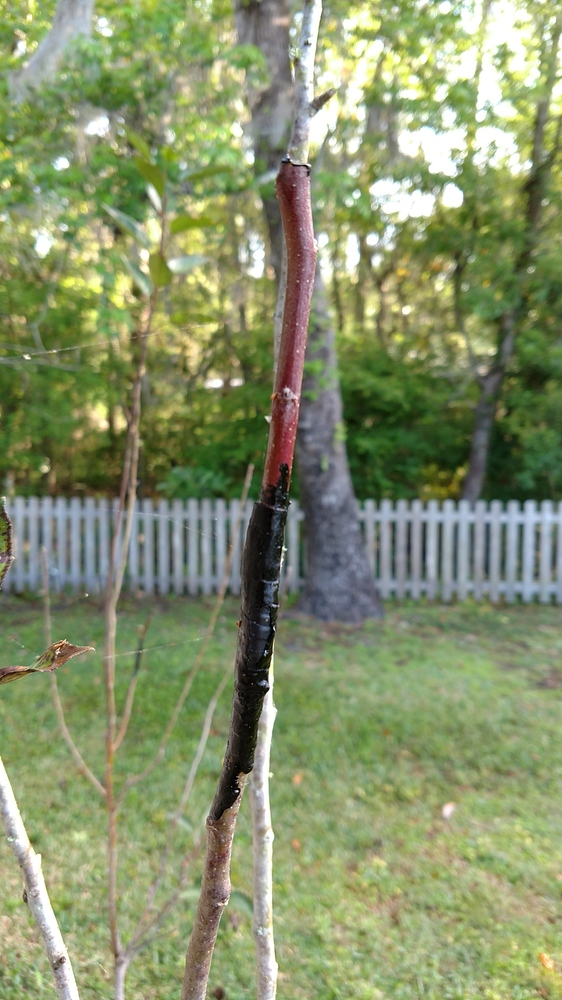 Your grafts will almost surely take, but low chill varieties don’t play well with others, especially Dorsett Golden. It will sprout and grow vigorously months before Roxbury wakes up, sucking all the energy. The Roxbury branch will remain about that diameter while the Dorsett branches are as thick as broom handles.

High chill varieties need their own rootstocks in warm climates, I recommend M111. You should try some more disease-resistant varieties like Arkansas Black, GoldRush, or Hunge.

Good info. Thanks @applenut. I’d be thrilled just for the graft to work. So your suggestion is to graft on some Arkansas Black, Gold Rush or Hunge?

No; graft a separate tree of any of them, or buy a nice big tree already grafted and ready to bear from Grandpa’s or Trees of Antiquity.

“…sealing with tanglefoot”. Why tanglefoot? Wouldn’t it too sticky to be used directly on a bark of a scion?

Maybe, yours is a different kind of tanglefoot. I only know the very sticky one using to trap apple maggot flies and ant.

@mamuang, this is the tanglefoot I’m referring to…it is definitely sticky but seem to work fine. 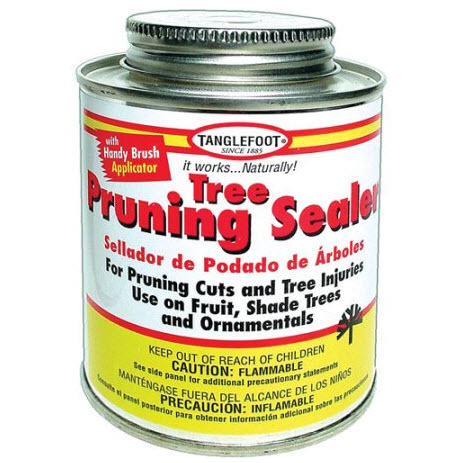 OK. My is a Tanglefoot for trapping insects.

These days, I stop using grafting seal because it’s not necessary. After I wrap the grafting union tightly with paraflim and Temflex or green garden tape on top, it is tight enough that sealing is not needed. I do cover/seal the exposed end of the scion with parafilm.

I usually just smear a dab of toilette wax on the end of my graft to seal it, seems to work well. Those look good btw, mine arent that clean looking, but usually take off just fine.

I wonder if instead of toilet wax or beeswax/paraffin, you could seal it with Plasticine.

Signed,
A person with a few boxes of unused plasticine…

Signed,A person with a few boxes of unused plasticine…

Here’s what some people with a lot of plasticine (and waaaaaay too much free time on their hands!) do with it:

Sorry I couldn’t get the actual picture up here- it’s a wiki jpg.

Sorry I couldn’t get the actual picture up

And I was really looking forward to that

And I was really looking forward to that

On my screen there’s a little “4” next to the box that doesn’t have a picture- click on that for the Wiki picture if you like.

OK. My is a Tanglefoot for trapping insects.

These days, I stop using grafting seal because it’s not necessary. After I wrap the grafting union tightly with paraflim and Temflex or green garden tape on top, it is tight enough that sealing is not needed. I do cover/seal the exposed end of the scion with parafilm.

Murky,
You are right.

Most of my trees are relatively young so no top work needed. I did top work once a couple of years ago. I used Dr. Farwell grafting seal. Still have half a container left.

Jeremy’s graft in the pic is pretty much what I have done these past two years.

first picture is on the Dorsett, it looks like it’s just about ready to pop… 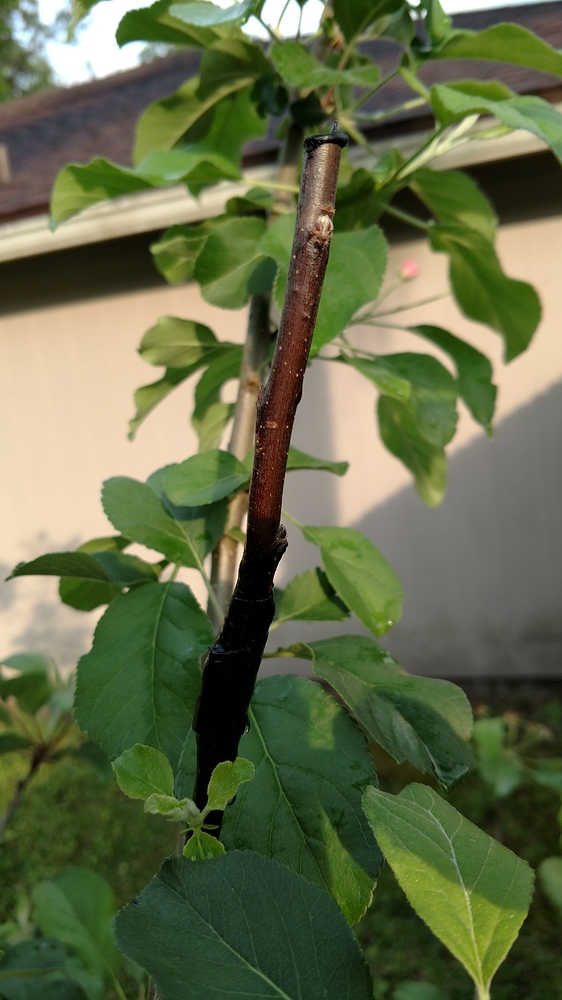 graft to my big river apple…this is the most recent addition to my mini orchard…it’s actually starting to leaf. 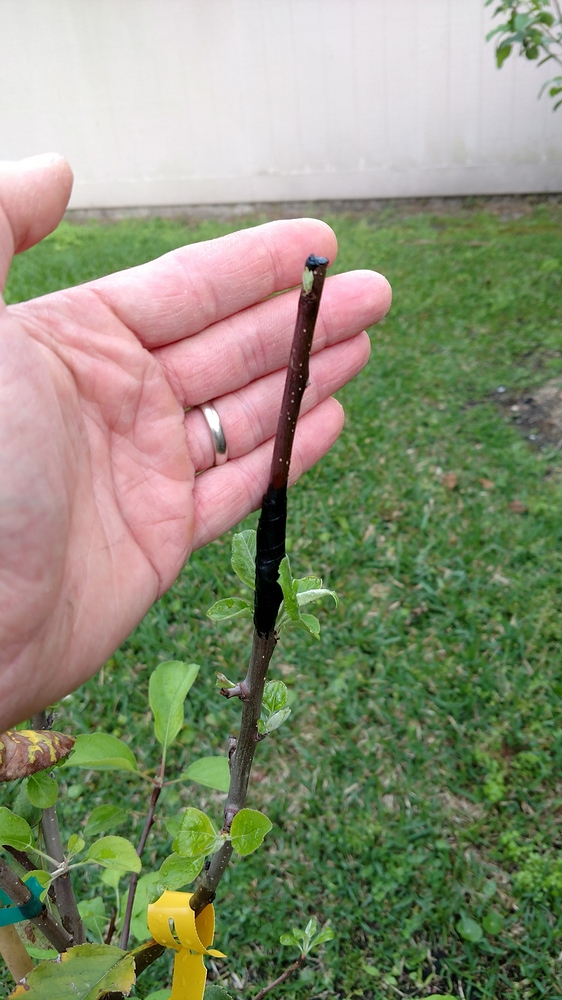 will be curious to see where they go from here.

All of this is from this past May, almost 4 months ago… 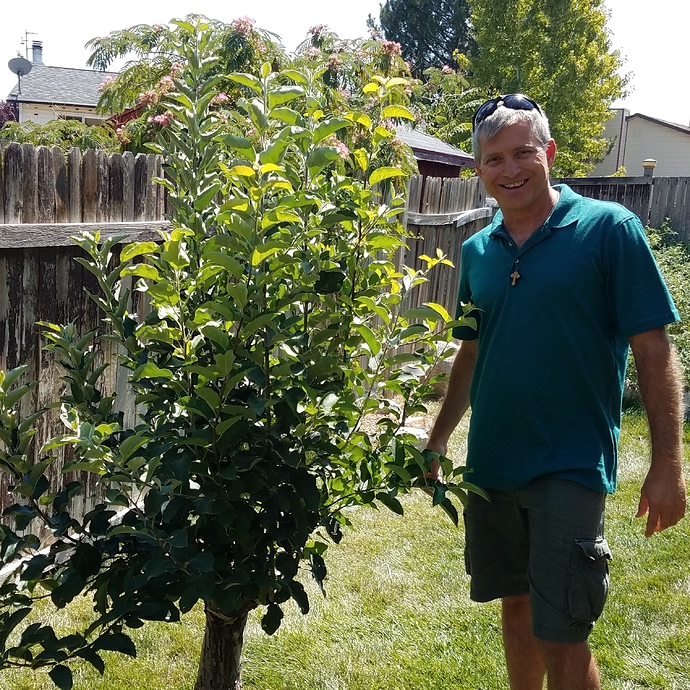 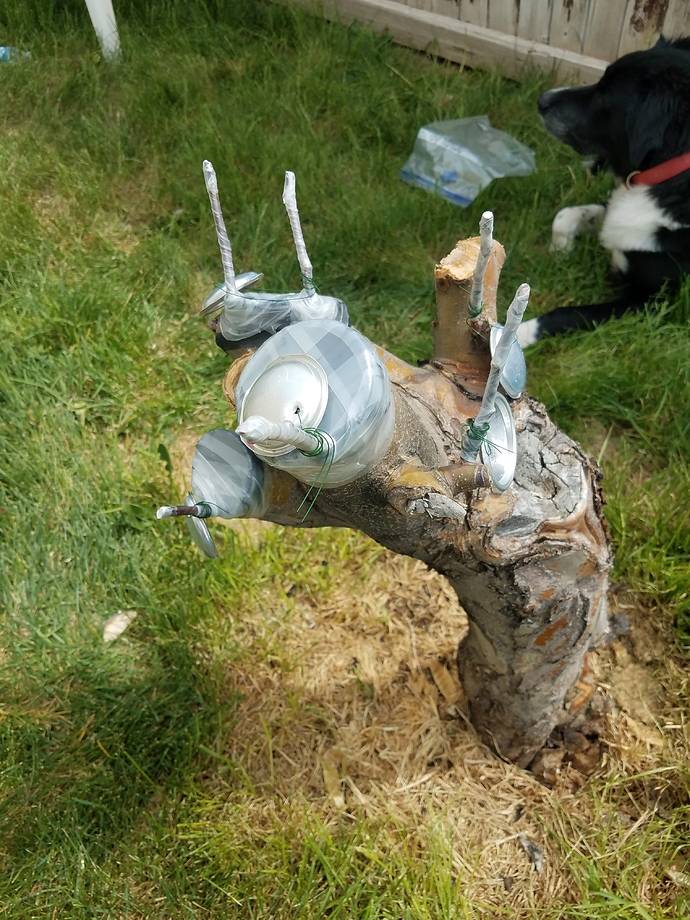 That’s some serious growth! I assume all 6 grafts took? Did you pinch them as they started to grow? Looks like many more than just 6 branches…what was the original stump ?

All of them took. However, I forgot to tell the guy I did it for to loosen the name tag wires as the grafts grow and one got pinched and snapped in a storm. No worries, since fortunately there was another of that variety that I had grafted (I think it was Pristine). I think the guy said the tree is around 25 years old. He hated to kill it, but it never produced good tasting apples. They were always bitter. He wasn’t sure what they were, but it wasn’t what was advertised. He was surprised when he heard from another friend about the grafting work I did over his crab apple. This pictured was my 1st professional graft, and the guy couldn’t be happier. In fact, he wants me to graft some Granny Smith and Honeycrisp on it in the spring.