Ok, here is my year end 2015 report in follow-up to my earlier spring/early summer report. Which can be found at:
http://forums.gardenweb.com/discussions/1503388/my-backyard-planting-experience-so-far-zone-4a-b-quebec-cana

We had a good growing year with the exception of a -2.4 C frost on May 23 which killed my apple, plum, sour cherry, grape and haskasp flowers. The remainder of the growing season was good with warm temperatures and sufficient rain to keep everything well watered but not soaking wet.

All the Bud9 apples planted this spring from Whiffletree survived and put on between 6-12” of growth. It was supposed to be on antonovka rootstock +/- Bud9 interstems but signals got crossed and everything arrived on Bud9 so due to my wet soil I have planted numerous antonovka seeds next to each tree and will try to grow my own rootstock in place to graft over in spring 2017. 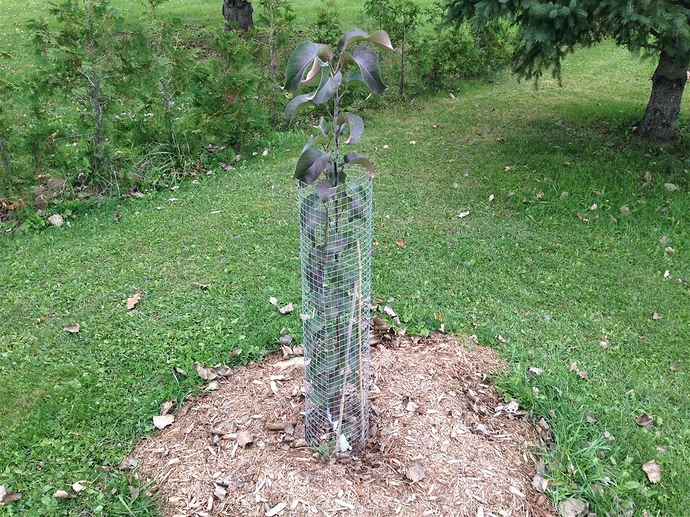 Pear - Moonglow (Planted fall 2014 Whiffletree - died back to graft over winter - sending up shoots but looks like shoots are from rootstock and are very weak. I will probably pull this one out)

Plum – Black Ice (Planted May 2015 from Whiffletree). Just getting established, put on perhaps 1 foot of growth.

All my chums (Kappa, Convoy, Sapalta) are continuing to grow and do well. Hopefully fruit next year.

All haskaps are continuing to grow and do well. I had 1 Borealis planted in the frost shadow of my house and I got 4 tiny berries! First time ever tasting haskap fruit! Hard to say at that size/number but previous descriptions of a flavour mixture of raspberry/blueberry seem to be dead on. Looking forward to more next year. 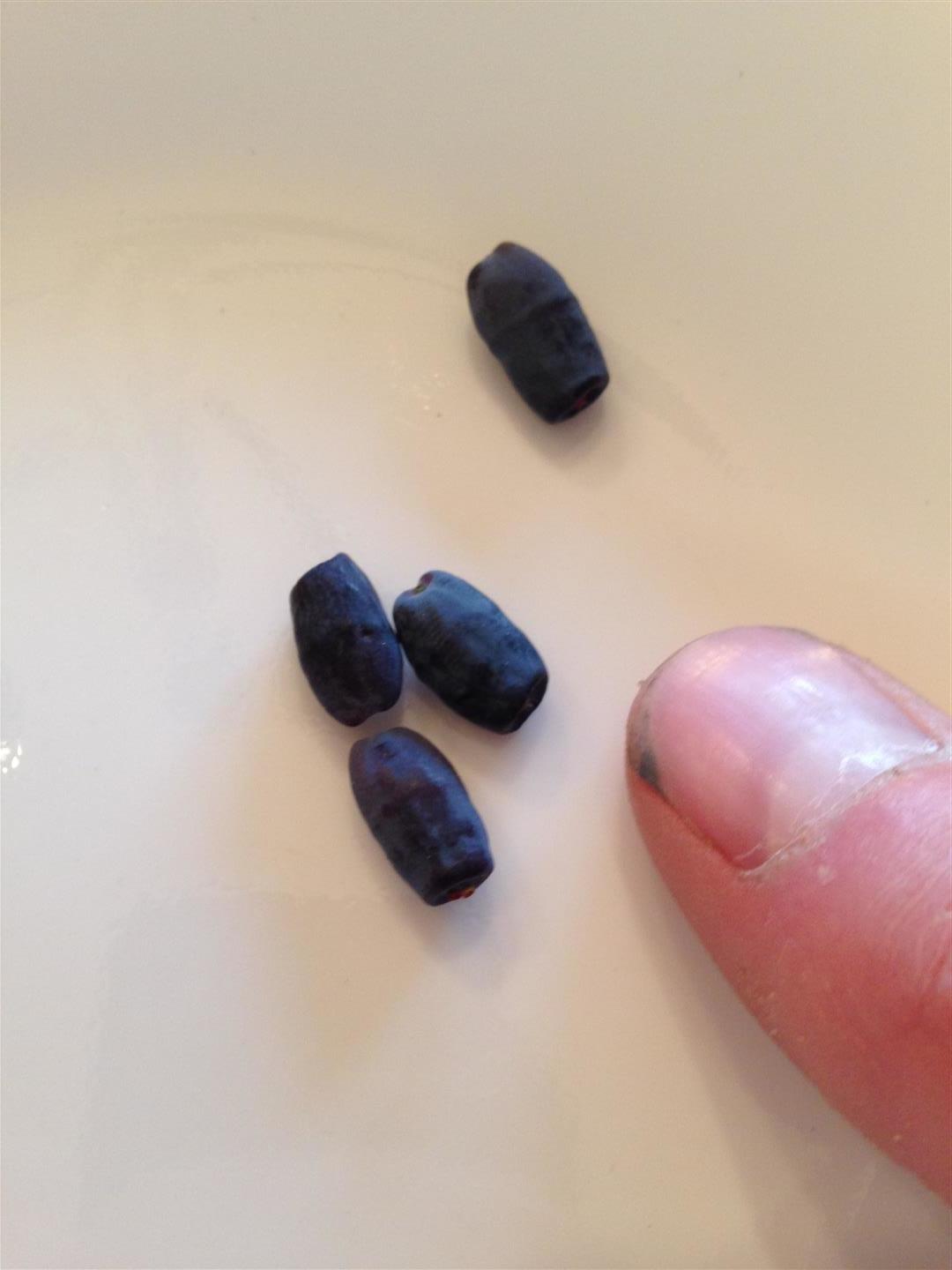 Elderberry – Wyldwood (Planted May 2015 from Whiffletree) This was in 2” pots and grew about 2 feet this year.

Elderberry - Bob Gordon (Planted May 2015 from Whiffletree) These were bare root and grew about 6 feet this year! Huge difference from the potted Wyldwood. Not sure if this is variety difference I am seeing or potted vs bare root. 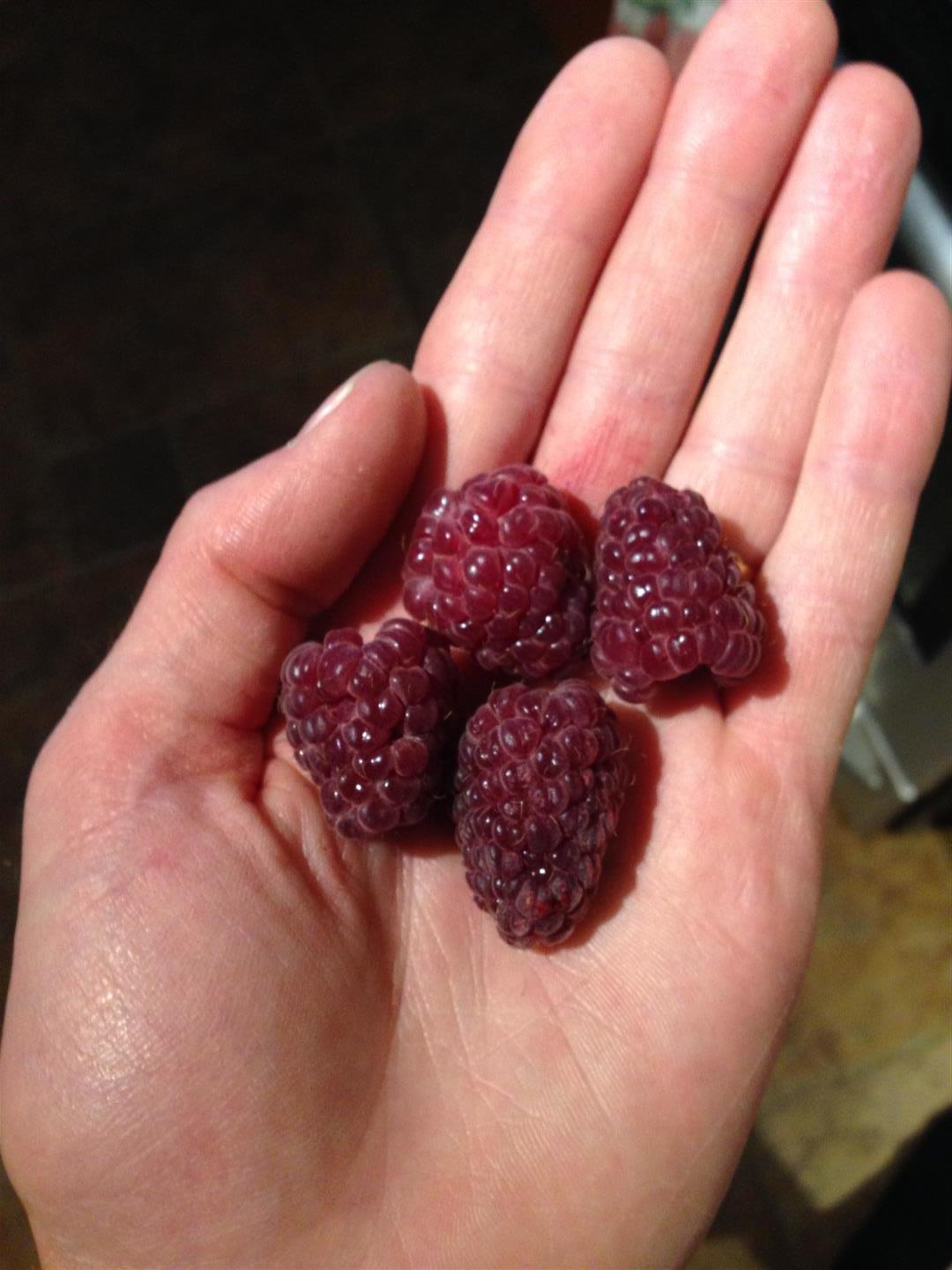 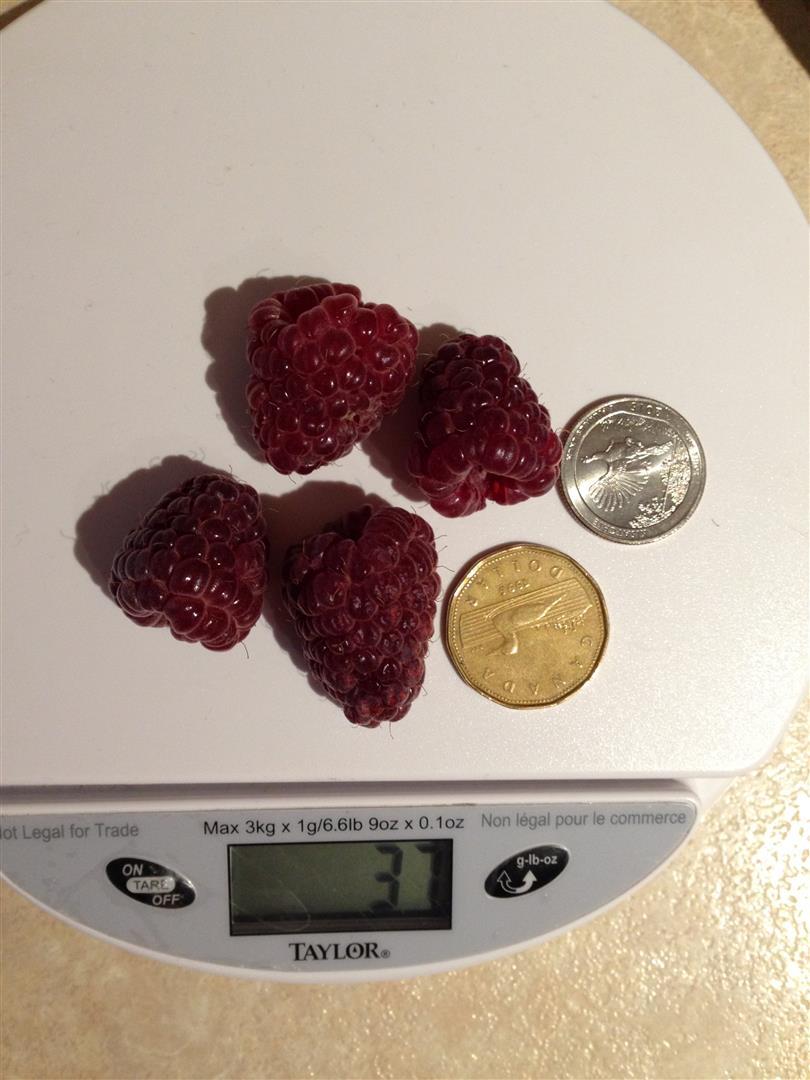 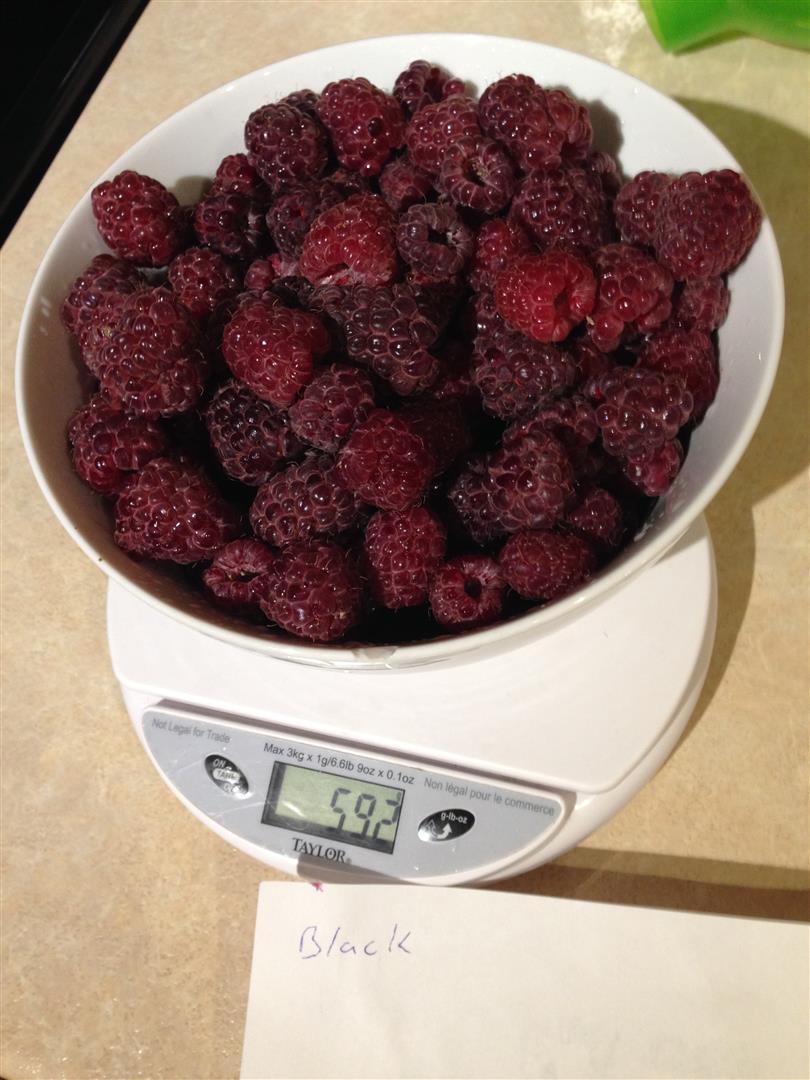 Grape – Reliance (Planted May 2015 from Whiffletree). Moderate vigor - put on 7 feet of growth in first year. Made it to top wire.

Grape - Polar Green (Sommerset?) (Planted Fall 2012 Greenbarn - survived winter – thriving). Very vigorous – I got about 12 feet of growth from new canes and 6 feet from the trunks that were left up from last year. Between the late frost and the attack of the Japanese beetles I only had 2 (TWO) grapes that survived to maturity! My first grapes from my vines! They were tasty but PURPLE. Dammit, looks like GreenBarn screwed me again and mislabelled the plants. I think this grape is actually Sommerset. I am hoping that my “Sommerset” grape is actually Polar Green as I don’t need 2 of the same vine. 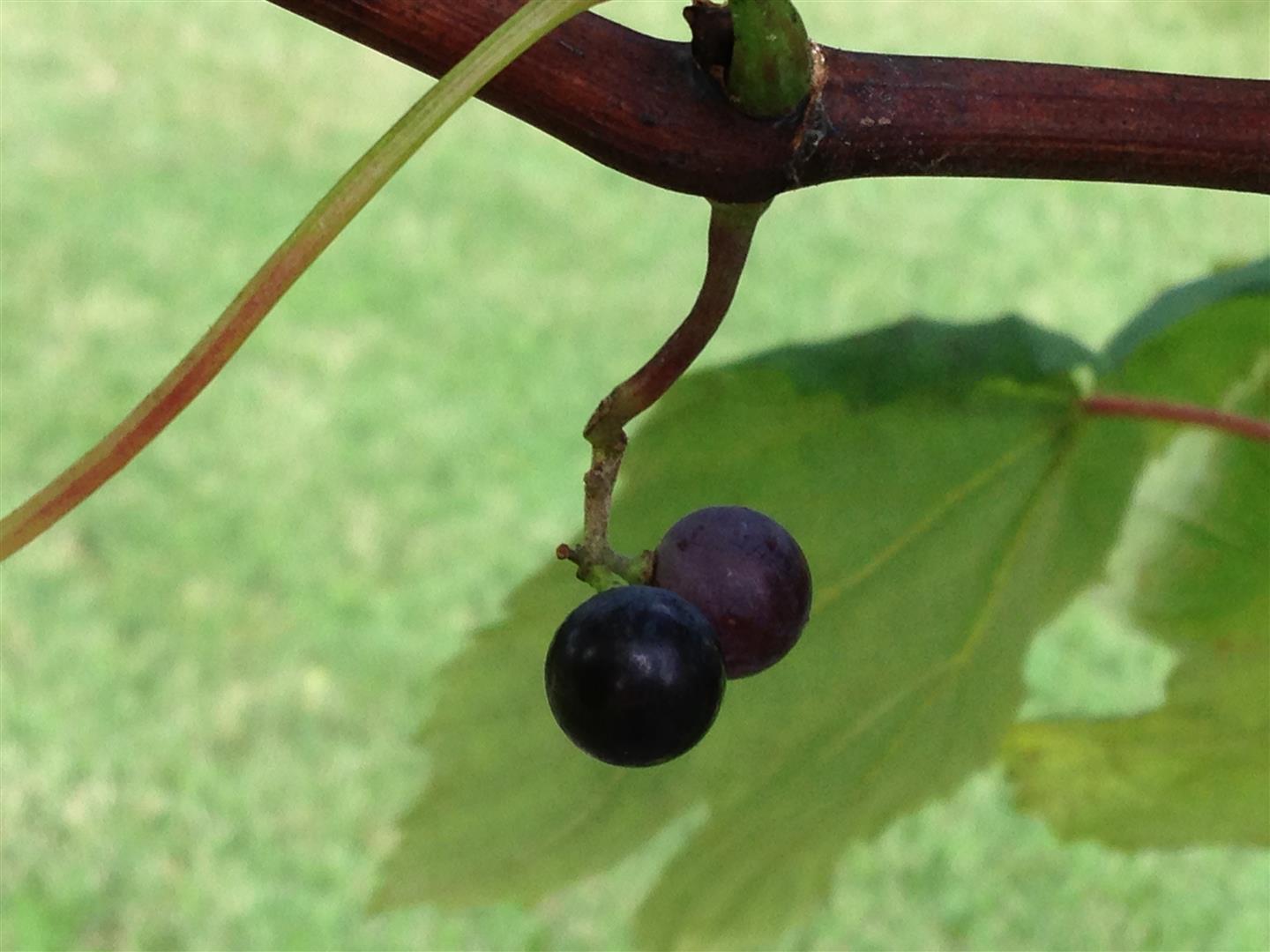 Grape – Earliblue (Planted Fall 2012 Greenbarn - survived winter, struggling (wet soil?)) – This had a very slow start to the year but finally put on 6 feet of growth and made it to my top wire. It is defiantly in the wettest part of my 2 rows so it has been struggling a bit but it has survived 3 winters so far with their wet soil so I am crossing my fingers.

Grape – Catawba (Planted May 2015 from Whiffletree). Moderate vigor – about 7 feet of growth in first year.

Grape - Concord seedless (Planted May 2014 from Whiffletree – survived winter) Vigorous. Put on about 12+ feet of growth.

Grape – Vanessa (Planted May 2015 from Whiffletree).Very vigorous – put on 12+ feet of growth in first year.

Blueberries all struggling without much growth. I don’t think my soil is great for them. Did get some berries from Chandler and Duke as well as a couple TINY berries from Northsky.

My sour cherries (Romeo, Cupid, Juliet, Crimson passion) continue to grow. Had to fence them because the deer come after these first.

We do not have the season for these to ripen. I pulled out the Prime arc 45’s last fall due to the thorns (I was sold them as thornless). The Freedome fruited on primacaines but were just starting to change color when first frost hit in October. I pulled them out because we just don’t have the growing season to ripen them. I’m not crying because I will replace them with Black Currants which have been doing AWESOME.

This photo was from Oct 11. Last year first frost was Sept 19. 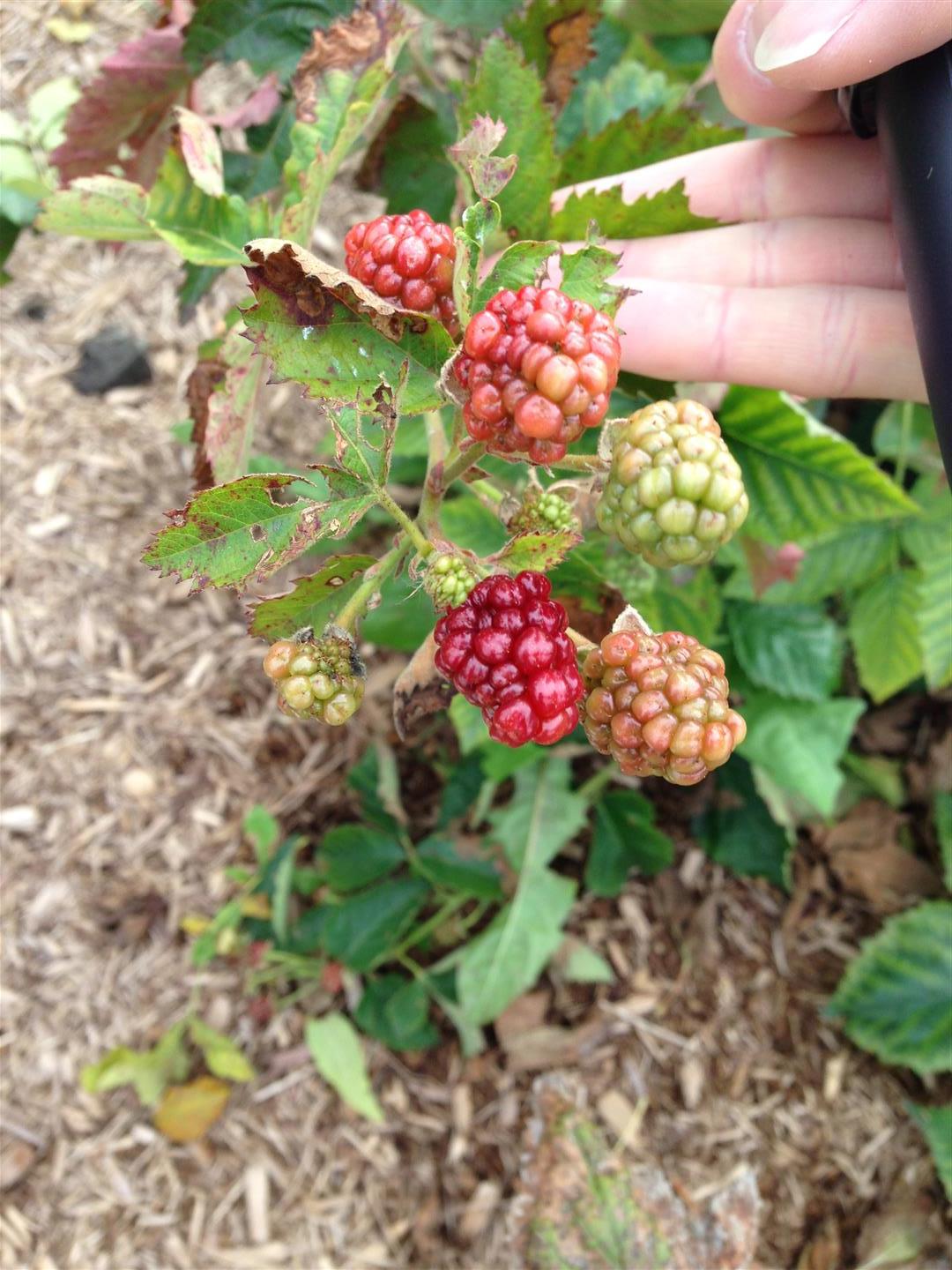 Appear to be males. Planted in a rural area on heavy clay with no irrigation. Growing like crazy with 0 care and 0 irrigation despite being in an extremely dry/drought area in full sun.

Mulberry - Seedling (Planted Fall 2012 Greenbarn – survived winter). Growing like crazy. Trunk is now about 3” in cross section. Hope to get fruit next year.

Got a haircut from deer. Now fenced. Put on 2 feet of growth. 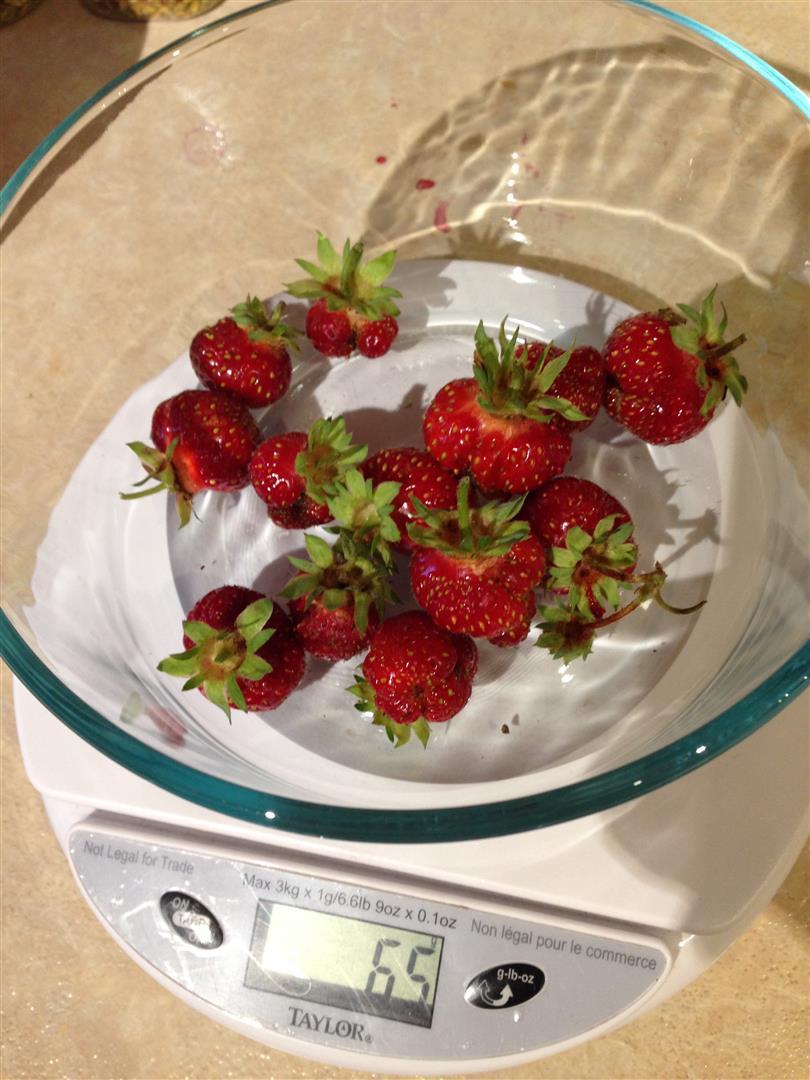 Rubarb - Victoria? (crown has been propagated in family for +80 years over 4 different moves!)

17 lbs harvested from 4 plants between May 31 and Sept 29! And I am not in full production yet. What a great plant! Delicious and a crazy long growing season. Rhubarb crisp is the best.

Gooseberries (Black velvet, Tixia, Poorman) are growing and I got 3 berries from Tixia. What a great fruit! Crisp, semi-sweet with nice acidity. First time I ate a gooseberry. Looking forward to more next year.

Currants (Ben Cowan, Ben Sarek, Titania) are growing like gangbusters. Titania is awesome, very straight growing and tall, about 4 feet. Tested if ripness increases if left on bush and nope, once they turn purple just pick them before the birds. Found a journal article that said the same. 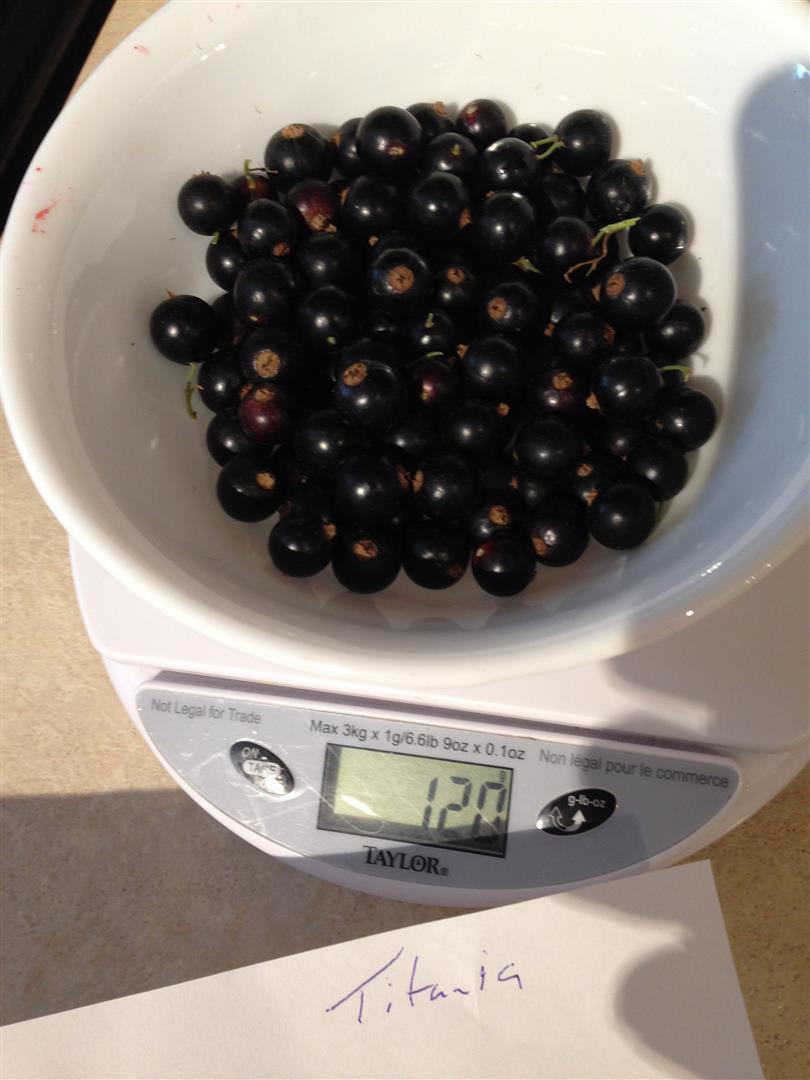 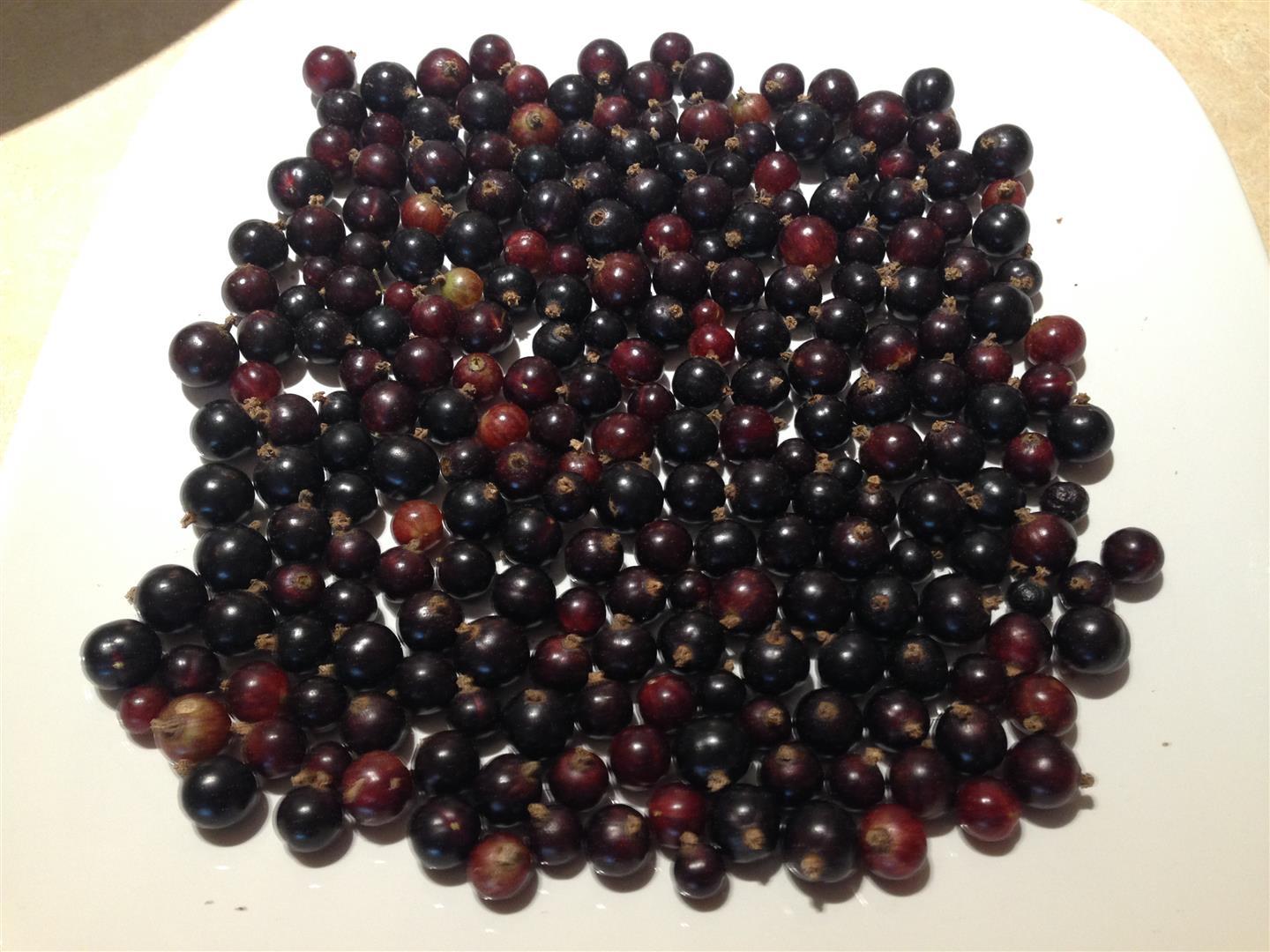 Paw Paw (NC1, seedling) – Planted May 2014 from Whiffletree. Planted in old compost pile so high nutrient but tendance to be dry. Also FULL sun. These have struggled a bit, only putting on a few inches of growth over the past 2 growing seasons. This fall I installed an irrigation system on the compost pile to water my Paw Pay, goose berries, currants and josta berries. We will see if this helps in 2016. They are still alive though.

Heartnut (Imshu, CW-3) - Planted May 2014 from Whiffletree. Planted in a rural property with no irrigation and sandy soil. They grew very well but the deer do like them. Survived winter 2014 ok.

Medlar (Giant Breda, Royal) - Planted May 2014 from Whiffletree. Planted in a rural property with no irrigation and sandy soil. They grew slowly and had some mouse damage last winter. Bad die-back during winter 2014 with some re-growth above graft this year but nothing great, not sure if will survive.

Conclusion:
So all in all a reasonable year. Disapointing a bit due to the late frost taking out all my larger fruits but did ok with berries and rhubarb. Really it was my Raspberries, Rhubarb and Currants that kept me happy. That said I am happy to still find healthy plants and good growth despite my soil being heavy clay and WET/Underwater in spots during late fall/early spring.

I am hopeful for a more productive next year. I hope to get some of my first apples, chums, cherries, jostaberries and some more haskasps. Currents should start ramping up production.

My grapes I am continuing to test their hardiness on my Geneva Double Curtain trellis. The majority have made it to the top wire with several extending 8 feet along the wire. I decided to go with 4 trunks from each plant with each trunk being permitted to grow 4’ along the trellis. So 2 trunks will be on west wire and 1 will grow 4’ north and the other 4’ south. 2 trunks will be on east wire and 1 will grow 4’ north and the other 4’ south. I have left 50% of the trunks of each vine attached to the wire and the other 50% I have laid down where they will be covered by snow. This past winter I only did this with the Polar Green (sommerset?) and the trunk left up survived and simply broke buds 2 weeks later than the trunk laid down. I will also be testing each vine with cane pruning vs spur pruning. 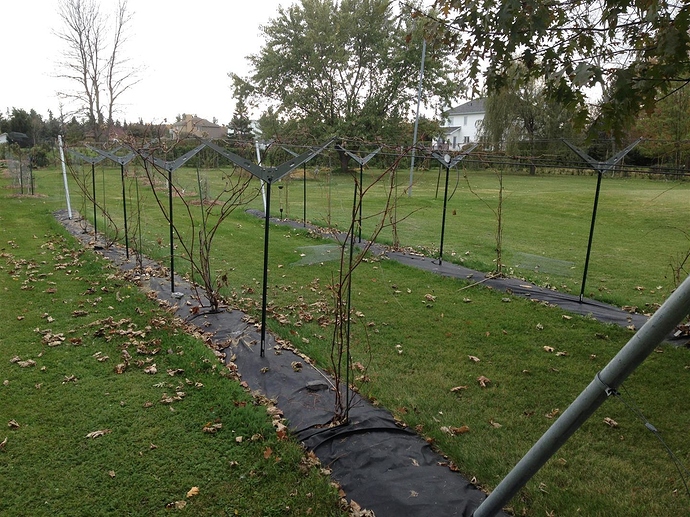 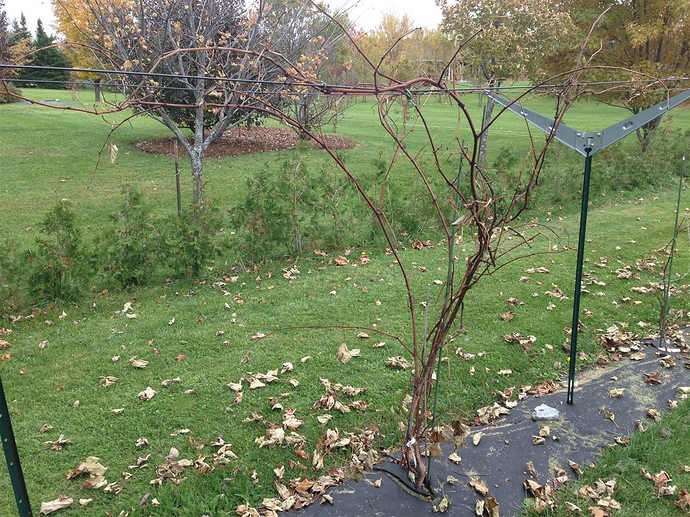 Items to be planted in 2016 are 2 replacement peaches, Bluebell+Swenson Red+Valient grapes, Patten pear and Tisel black currant. After that my yard is full.

Have a good winter everyone.

I’ve always admired the tenacity and hard work you have put in regarding gardening in your zone 4.

Thanks for posting the reports. I wish you a lot of success.

If it were me, I would just be frozen

Thanks for such a well written and detailed narrative. The pics made it even better. I’m always interested in reading about growing experiences in other areas.

Sounds like it was a good year, all in all. I hope each year is better than the one before. Maybe next year will be a Year of the Large Fruit for you.

Oh yes, a good year even with the late frost. The cold does not bother me, it is my wet, clay soil that keeps me up at night but so far so good. I will not be surprised to lose apple trees to crown rot in the future but that is why I am trying different rootstocks like antokova. If things live, great, if not they get replaced by something else.

The raspberries, currants and rhubarb made it all worth while while waiting for my larger trees. I’ve canned up a ton so I can enjoy them through winter. Next year I should start hitting my stride with some more berries and stone fruits with hopefully a light crop of apples. In the next 3-5 years I should be up to 1000+lbs per year between apples, pears, grapes and other assorted goodies.

I love winter because it means I am one step closer to my next growing season!

Impressive orchard, its hard to even imagine how great it will look in a couple of years!

I too cannot wait to see your orchard in about five years. The difference will be remarkable! Keep on taking pictures often. You will be surprised at the rate of growth in your trees and shrubs. I envy your raspberries as many of my shrubs are in semi-shade instead of full sun. My plant is to simply add more berries next year in a sunnier location. Your orchard and berries look just great!

How did you like the taste of your Northsky blueberries?

My blueberries are struggling. I’ve only had fruit from Duke and a bit from Patriot.

I am still duplicating posts between Gardenweb and here so I am starting a new topic for continuity. The update is at: My Backyard planting experience (Part 2) - Zone 4a/b Quebec, Canada