I bought a lemon tree this winter. It came in May. It just sat doing nothing till last week. It finally grew some new growth. It also has flower buds too. It’s just a tiny tree, but I have big expectations for it. 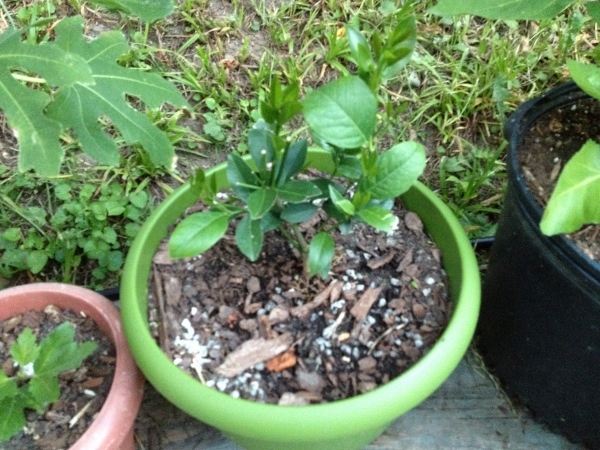 I’m hoping to find one this year. They are $80 at a local nursery but they usualy go on sale in July. Here’s hoping. I’ll have to shuttle mine indoors zone 7b) and I already have the ramp hardware and boards to do so. Just waiting for the lemon tree.

It looks good. I’ve been growing ‘Meyers’ for years and you will soon see a lemon. It will be delicious and you will simply want more. You’ll love to watch it turn a ‘golden’ yellow, not the supermarket ‘light yellow color’. Its great and not so sour.

Anne, better to order it for Fourwinds citrus. They sell excellent, healthy plants (small trees). They have not failed me in ten years. And. . . they are half the cost.

They are $80 at a local nursery

There’s a flood of Meyer Lemon trees in local nurseries and big box stores here. People can’t give away all their Meyer fruits. I just don’t have the heart to rip out my tree!

Make lemonade and freeze it in icecube trays, put it in iced tea!

Sorry jujubemulberry, I was in sticker shock and glazed over at the price and didn’t think to ask. I was calling around to all the ‘big box’ stores since folks on this forum seemed to have gotten good deals there, but no one had them. Only one nursery. Maybe I’m too late. I’ll keep looking. Never paid that much for a tree. I’m sure it is worth it.

Anne, have you called Stan at McKenzie Farms to see if he has any in stock? He usually has many more varieties in stock than are listed on his web page. The prices may be slightly, but not much, higher this year than listed on his pages. If you go in person, he also sells in larger containers than the 1 gal. sizes. Even the 1 gal. trees are larger than you might expect.

From where you are located, you could probably even drive there. It would take less time than going Myrtle Beach. Neither you nor Stan are located in quarantine areas. So, there aren’t any restrictions on transporting citrus.

Who knows, you might even change your mind on that Meyer and buy something better - like an Owari Satsuma.

glazed over at the price and didn’t think to ask.

80 might be too much, but i agree, if one wants one right now, price is not an issue. Still remember those days when a digital camera costs upwards of 1k$, and everybody who bought one was so happy!

You’re killin’ me here. But I’m researching your suggestions and if I wind up with 2 trees instead of 1 I’m holding you responsible. LOL.
We are so vulnerable to these kinds of suggestions…regarding trees.

Thanks for the info.

You can learn more from him about cold hardy citrus and citrus care than from anyone in a regular nursery. Tell him I sent ya. I think he knows me as the lady from Columbia who goes there and fills her car every year.

I may have bought him out of his largest Owari satsumas this year. I’m going to be planting some in the ground permanently, but wanted extra to be able to hedge my bets by bringing some in for the winter.

I think I only paid $16 for mine but it’s tiny. They wanted $60 for the bigger one probably three gallon pot. I think I got it at Raintree.
I had to pay shipping on top of that. I don’t mind getting a smaller tree for less. You get to watch them grow plus I already have other mature fruit trees so it’s just a cycle now. Time goes by so fast anyway. If you just do it now you will be thankful later on.

If you don’t like you might as well give it away. I’m surprised other peoples problems, or the cost going down influences weather or not you like it. I wish they sold it in our stores. I live in the northern US, and they don’t see the market for it here. I did see hardy Kiwi in Meijer’s but they were all dead and dry. I bought two a male and a female. The male was dead and the female is still struggling. I tried to get another but they all dead.

Johnny, I hope you didn’t take it the wrong way. Nothing wrong with Meyer lemons or Persimmons. I eat plenty of both that my friends and family dump on me! But I guess I’m as excited about them as you are with 1/10" of rain in summer!!

Here is how my Meyer looks now. It grew 12 flowers that fell off too. 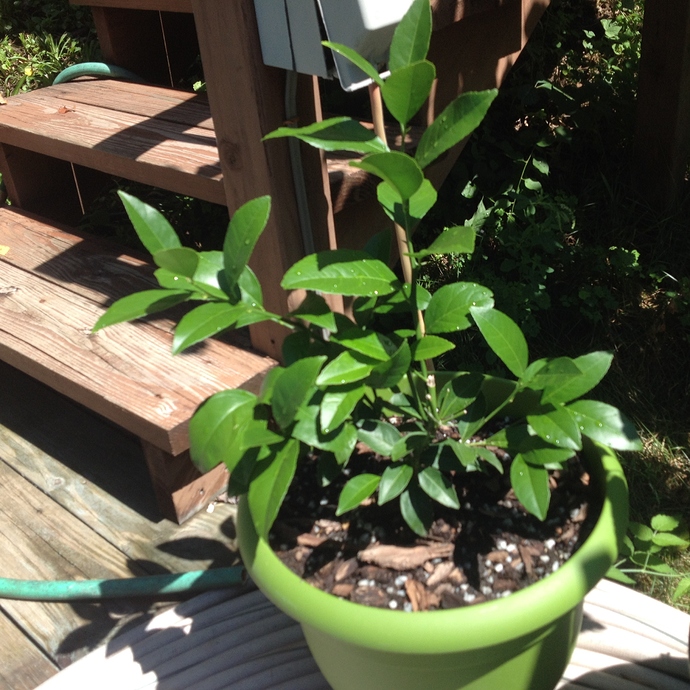