My Violette du/de Bordeaux (not Negronne) is troubled

I’m in Zone 8
I have a Negronne (10 mo. old) and an Atreano (1 yr., 10 mo. old) that both seemed happy and healthy during the Summer and appear to be healthy though dormant now. My Violette dx Bordeaux (1 yr., 10 mo. old) looked pretty good the first Summer, then died back in the Winter. Last Summer it ‘came back’ but with just a little growth…some leaves on the original stem, 20" tall, plus a new shoot/sucker from the ground about 14" tall…nothing like the ‘comes back every year and grows 5 feet’ that I hear about. Anyway, it died back again.
I’m wondering if I should dig the whole thing up now and put it in a pot to bring inside during Winter, or pull up the shoot/sucker and maybe gets some roots with it and try to root it, or cut the main stalk and/or the shoot/sucker and try to graft it/them onto the other two fig trees (that are less than 3’ tall), or ?? I’m new to figs.

I have heard VdB is not a fan of cold and won’t tolerate it like many other varieties. I’d dig it up and grow it in a pot.

We had a very mild winter and my VdB took damage to the tips. This variety is not as cold hardy as I had read and I expect to have die back on cold winter years. None of my other figs had any damage this year.

How cold did you get? Last year we had consecutive freezing nights of 22F, 24F, and 28F and two of my three VdB in-ground plants died to the ground. The one that survived had more lignified growth than the others (for an unknown reason). In my experience, VdB is unable to ripen fruit when it suffers severe dieback, so my conclusion has been the same as the previous posters here… not a great choice for in-ground in zone 8.

Dig it up, I will. Officially I’m in an 8B zone but the weather has been wacky, and with most of the world experiencing record-high temps the PNW has been quite varied…even with a -1° F a couple Winters ago. Recently we were in the high teens.
The VdB doesn’t require many chill hours but my basement is quite warm because the ceiling contains the warm water tubing that heats the main floor of the living space…so it never gets close to 45° F. My garage is essentially outside…no heat source besides a little coming down from the sky, so it would freeze at times. I’ll have to figure out an arrangement. Maybe some chill outside in the high thirties/low forties, in the Fall, and then basement 'til Spring…would it stay dormant at usually dark, and ~60° F?" I’ll have to learn about that but I have 6 months to do it. Thanks for the replies!

Growth is the biggest factor for fig tree hardiness. Vigorous trees that grow late into the season are not very hardy and can be killed to the ground by the first frost. Trees with a mature growth habit are much more hardy, so after a year or 2 in a container it should be fine to spend the whole winter in the garage. Avoid pruning and fertilizing excessively. The rootball being above ground will also help stop growth earlier, because the container will cool down faster than the earth. Some varieties do tend to grow more and later into the year, but other factors control growth as well.

If all goes well with the transfer into the container I might be able to watch for clues over the next couple of growing seasons regarding these characteristics that you mention. I’d like to end up with a few ‘care-free’ outside units but maybe I’ll learn to deal with borderline cases that need some help getting established. Thanks!

VDB is worth doing whatever you can. I like this one a lot. Mine has spent 2 winters in the garage and is fine. In a pot.

2 winters in the garage

That is a mystery to me. My unheated, detached garage will be 25°-26° and not windy inside, when it’s 24° and maybe windy outside; plus even the bottom-most roots of a plant in a container will be as cold because they’re not two feet underground. I don’t see how a sensitive plant would find those two environments significantly different. Like I mentioned, I have at least six months to figure this out, but that’s a poser. I could probably benefit from a partly/mostly underground ‘root cellar’ 'cuz even my basement is too warm for dormant plants.

It is strange, my warmest storage area has been down to about 25 and a few fig seedlings are still holding onto their leaves and doing fine even after their containers froze. I think there must be something to evaporative cooling from wind, because I often see frost damage associated with lenticels where water vapor could possibly be exiting. 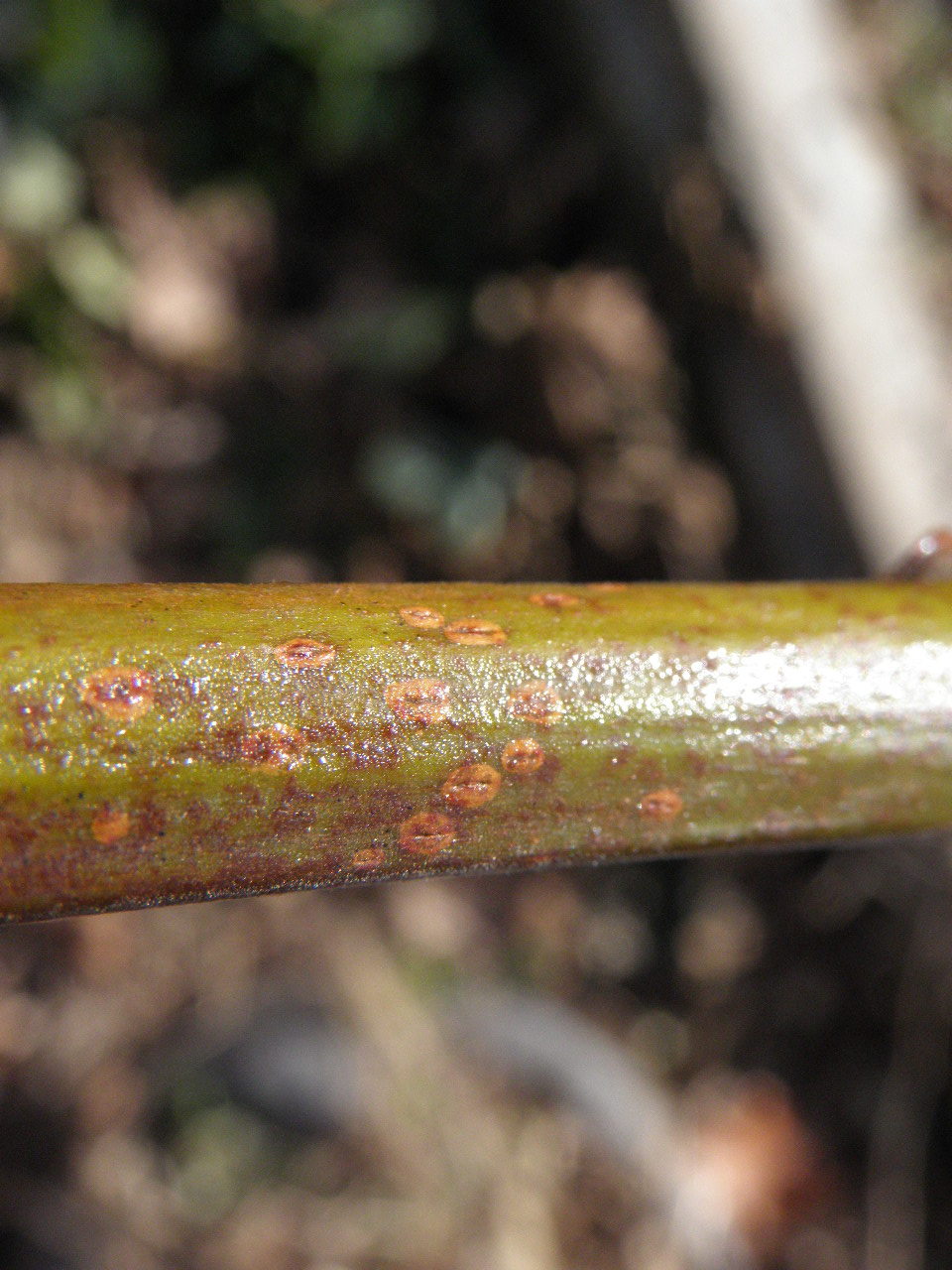 My basement is too warm too. My garage is attached, so even though it is cold, heat radiates through the floor from the house, and basement. Also the door is brown aluminum and even on cold days the sun will warm the door. 2 winters ago, one night it got down to -16 F. I put a space heater in there. This year my VDB was close to the door, if not sunny that is a very cold spot, it is very much alive. All the figs look great, about 25 plants. Some are going to be used to graft over.

This year I left currants, red, and black, a serviceberry, 4 honeyberries, and a tart cherry in fabric root pouches out all winter fully exposed. The rule of thumb is 2 zones down, so I’m in 6 that would be zone 4, all probably are hardy to zone 4. Anyway they all survived as buds are swelling on all the plants. I also left 5 blueberry plants in regular pots outside all winter with overhead protection. All look fine, and all are not hardy to zone 5. One though is to zone 3 (pink popcorn).

Figs are amazing how adaptable they are, I have grown tropical plants for 40 years, and seen nothing like them.
Looks like VDB but can’t take the outside. It’s worth growing in a pot for sure.

I have three in ground fig trees (not VDB!), but it is more an experiment. Still don’t know what shape they are in? I will in about 6 weeks when I unwrap them.

Evaporative cooling from the wind = Wind Chill Factor…very keen observation with the lenticels.
Soooo…the solution may be to grow the VdB (there may be two now, once I dig them up) in a container(s) for a couple years and while they are getting tough, experiment with chill hours; Spring-Summer-Fall-Summer, since I currently have no over-Winter environment; see how they do as houseplants with 3/4 or 3/5 of their lives outside; and anything else that I can try to make this work…including building a quasi-geothermal greenhouse aka daylight root cellar.
One little fig tree seems like a small matter but many people on this forum are looking for ways to stretch boundaries, to grow different plants in different conditions, get plants to fruit when they aren’t currently doing so, etc. All the knowledge adds up…thanks.

My Negronne, just finished it’s first year in the ground, and went through
our relatively mild winter with no damage. It grew from a one gallon plant
to a 6 ft. high well branched bush. I think the stronger the root system is,
the more it can withstand the winter.

I have a Negronne that seems to be doing OK. It was planted late last Spring and wasn’t pruned at all 'cuz it was already leafing out. It didn’t grow much but it looks healthy so it should this year. It’s not the same plant as the VdB. I did get the VdB dug up and into a container today. I brought it in the house so it’s now early Summer for it (no direct light, though) and will get sunlight when it leafs a bit. It didn’t like the outdoors at all…even has a bit of mold/mycelium on it just below the soil line.

Here it is, three weeks later. I thought I had finished it off 'cuz the pot even had a little mold growing in it (still does). All four uprights are dried-up dead…dang. I need to put it in the light, now.