New to me apple scions

There was a lady at the local farmers market that was giving away apple scions. My friend brought a few of them home. She told me the names, but I had not heard of any of them. I was able to find brief descriptions of most of them, but are they rare?
Dutchess
Gray Pearmain
Hudson’s Golden Gem
Lady
Mollies Delicious
Ortley
Summer Rambo
Yellow Newton
Jeneting
Shackleford

Jeneting has a mention on this forum from 3 years ago, no description.
I couldn’t find anything on Shackleford.
Some of the names she wrote down may not have the full name, there are several apples with Lady in the name.
And the Yellow Newton also has Pippin in the name.
Anyway, has anyone grew any of these or have any recommendations? Most of them sound like they should have good flavors. If she got long enough scion to share with me, I may be able to find a limb or two to add to my Frankin tree.

Was this local farmers market in Washington? The reason I ask is that I grow all of these but Shackleford I just grafted this year after receiving it from David Benscoter (the apple detective) who has been identifying old heirloom varieties of apples in the Palouse region of that state.

Except for Shackleford which I have not tasted the rest of these are great tasting apples.

It was in Newport, WA

Lady is the oldest know apple cultivar. It is known to have been grown by the Romans. Martha Washington used to keep a few handy in her dress pockets for whenever she needed a snack.

There are many strains of Newtown Pippin (which originated in New York). The yellow strains are associated with the Albemarle Pippin wing of the family. That strain came out of New York but was later grown successfully in Virginia. When in Europe, Thomas Jefferson complained they had no good apples to compare to “our Newtown Pippins.” The apple somewhat resembles an antique version of Granny Smith but has a unique “piney” element to its flavor.

Summer Rambo is a summer pie apple grown widely in Maryland. It is not impressive to me in the least, but it is reliable, so all the local farmers grow it for the early-season pie market.

Hudson’s Golden Gem is widely known by us apple snobs as one that can do well in Oregon.

Dutchess MIGHT mean Dutchess of Oldenburg- a well-known cold-hardy apple from Europe adopted for growing along America’s northern tier. It was a key apple used in Minnesota’s breeding program, and was recently identified as a grandparent of Honeycrisp through genetic analysis. Most of the apples planted in northern Maine are DofOs.

The others are less widely known. I’ve seen them in rare collection listings, except perhaps Shackleford, which I do not recall ever seeing.

Mollies is the only one of the group that I have tasted. It ripens about mid August at my location. It is a medium to large apple with a mild sweet taste but not as sweet as Gala.

Hey Matt, good catch, I did not think of Dutchess of Oldenburg, but Duchess’s Favorite, a different but good to eat as well.

Here’s a Fedco description for Gray Pearmain (as you can see, exceedingly rare until recently):

We have Gray Pearmain and it seems to be growing well (starting its second year), but that’s all I can tell you.

Here’s a description from Fedco in Maine:

Medium-sized slightly ribbed and muffin-shaped fruit has a soft opaque greenish-yellow skin with a rosy pink blush, a russet veil, and a greyish bloom. Produces excellent juice. Pick late and eat them in the fall and all winter.

Until recently the only trees we knew of were at The Apple Farm in Fairfield, across the line from Skowhegan. Through the generosity of the Meyerhans, the Gray Pearmain is now being grown throughout Maine and beyond.

And here’s a link to a tasting description on Adam’s Apples: 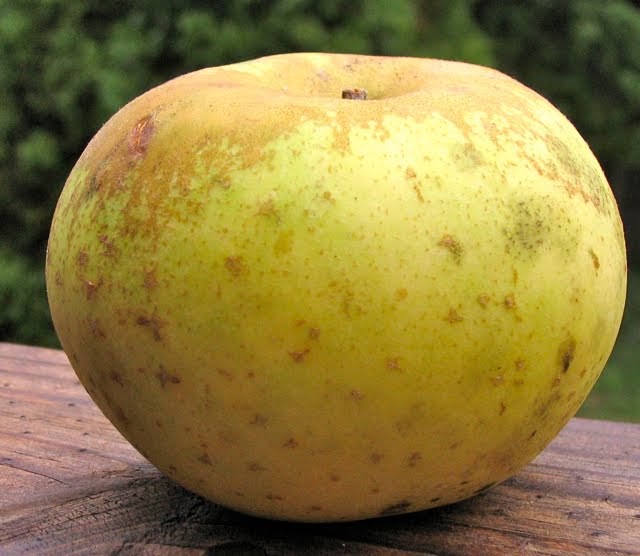 Hundreds of apples, plus notes and comment on the harvest and more.

I think some of the others are described in Burford’s Apples of North America.

To fill in the details a little more:
I thought you might have meant Duchess’s Favorite when you listed Dutchess and that one I have described as:
England - 1863, late, large red skinned fruit. Named after the Duchess of York. Crisp, sweet, tasty red and white flesh.

Ortley - Originated in New Jersey, USA in the orchard of Michael Ortley. Described in 1817 as Woolman’s Long Pippin. Re-named Ortley in 1825. In 1872, the commercial synonym Cleopatra came into use. Fruits have tender, very juicy flesh with a pleasant mild flavor.

Yellow Newtown - New York - early 1700’s, mid, large fruit is at first dull green, but changing as it ripens to a fine olive green, or greenish yellow, with a reddish boush. Flesh is yellowish white tinged with green, firm, crisp, very juicy, with a rich and highly aromatic flavor. A favorite of George Washington. Spur bearing.

Shackleford - heirloom from the Palouse region of Washington

Thank you everyone for the information. I went to my friends today and got a stick of each. The lady giving them away did not grow them. Someone else gave them to her, don’t know where they came from. Some of the scions had commercial labels on them, I didn’t pay any attention to anything on the label but the apple name. Darn. I plan on going to the farmers market myself Sat. and see if I can get any more information. Maybe I should go to the local farm/feed store and buy me another apple tree in a pot with a lot of limbs.

buying another apple tree with a lot of limbs is a great idea!

Tessie5- I believe I know who the lady was that had the scion wood. She had some extra she could share with others. I live just 30 miles from Newport. I have the Shackleford as well as scion wood for other lost varieties. Send me en email next January and we can meet up if you’d like some scion wood. Dave Benscoter dbens23@gmail.com

DaveB will do.
And I did buy another tree, a Zestar. I choose a taller one with lots of limbs and put 7 of the above plus 4 others I had on it.
I know they are probably too crowded but it will give them a chance to grow, then I can move them.

Tessie5; I just got a scion of Shackleford from DaveB three days ago. Looking Shackleford up is an adventure. I found a summary of a fruit growing congress in Warsaw, Illinois from 1883 and another mention in a “Cyclopedia” of fruit dating to a bit later. Both indicate it may have arisen from a Ben Davis seed near the site of the Battle of Athens, Missouri, which is in Clark County. That site is on the shore of the Des Moines River, about 25 miles from where it empties into the Mississippi. That confluence is where Warsaw, Illinois, is located.
The Cyclopedia says Shackleford is a moderate size, drooping tree, hardy for that area, useful November-April, fruit is precocious, larger & regular in size, shape and productivity, not especially noted for its flavor among others available in that region.

Since DaveB finds it among the better tasting among those he’s re-discovered, we might be in a better soil or climate for it. Clearly it is hardy enough for our region, since the tree lived without care for decades before being identified. I plan to graft it on an existing tree and to at least one more young stock. Will report if it calluses & yields fruit some day.

I had looked at the Shackleford, but decided to stick with apples that should taste good. I sent an order for 7 apples, 2 pears, 5 plums and 2 grapes to Mike. He has everything but was waiting on DaveB for the apples. i wanted some earlier ripening apples, most of mine are late. These aren’t all for me, some for my daughter. I have quite a few varieties already and am really hoping for a few blooms this year. Have a couple of frankin trees. Same with pears.

Regarding earlier apples: I grafted Maiden Blush last year and transplanted it in November. It is an August apple & once grown in this region 100 years ago. Nice start to its growth in the first season.

Nutting Bumpus is a seedling of Duchess of Oldenburg, looks and acts much like her, but is reputedly sweeter. If I can get it going, will proclaim it to the world. I’ve not tasted either of these.

Winekist is deeply red-fleshed, small & tart. It makes applesauce faster than you can clean dishes while it cooks. If you include it in a pie, add another apple that doesn’t cook to purée. Ripe here July 20-30. Rather spindly tree, which blooms mid-early to mid-season. Beautiful flowers & fruit.

I tried Rambour Franc/Summer Rambo. Modest flavor, severely biennial, triploid, rather late to begin fruiting. Top-working was a disaster, so started fresh with Maiden Blush in its stead.

In your higher/cooler area, you might try Discovery, an English apple I’ve feared would not succeed on the even drier side of Spokane, where I live.

One of my Shackleford grafts took and put on modest growth this last season. I’ll hang on to it & report on its progress.
@tessie5: among your list, if it is Duchess of Oldenburg, that may ripen ahead of Rambour Franc/Summer Rambo in August, then Mollie’s Delicious around Labor Day.

Four of the grafts grew on the Zestar. Gray Pearmain, Summer Rambo, Mollies Delicious and Dutchess (which ever one it is, just had Dutchess on the label, and it could be spelled wrong).
I gave the tree to my son, it had a few blossoms last spring but he is in a late frost area and they froze. He did have some apples on his other trees.
Hoping some of my grafts bloom this year, I have about 28 different varieties, 21 are younger scions on 5 different trees.

Years ago I read about Multnomah in the Seed Savers Inventory * ordered it from Temperate Orchard Conservancy. I had never heard of Otterson or Windham Russet until about this time last year. Discussion of red-fleshed on this forum alerted me to Otterson. Looking over the offerings from Fedco brought Windham to my attention. Then DaveB came up with a bunch of his recoveries, so I snagged a scion of Shackleford.

All 4 are started. Once again I find this pursuit takes unexpected turns. Pretty excited about the possibilities!

Great info Derek. I love the stores of apples and also sometimes just the name makes me want to grow it. I’m a sucker for some of the apple’s history.