This article from Growing Produce on Organic FB control on Apples in Washington caught my attention. 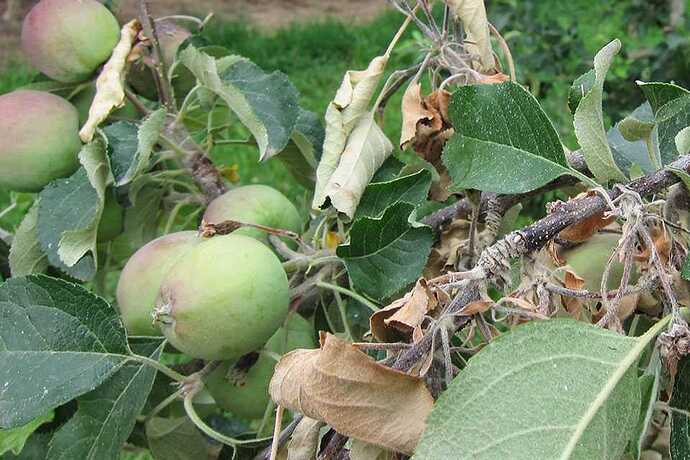 Antibiotics or no antibiotics, apple and pear growers have a treatment they can trust in the suppression of deadly disease.

Thanks for the article. It would be nice to have some organic approaches. I’m using strep but wish I had other options. I guess strep was OMRI approved up until a few years ago, but still would like to phase it out for my trees. My 3rd leaf apple trees were devastated by FB in 2017. That was before I started using strep. I thought I could stay ahead of it with careful daily observation and pruning. Bwahahahaha silly me.

I was just about wiped out by FB too in year 3 even with strep. The more shoot blight I cut out the more FB I got

Very impressed with the information in the article, but it would require a lot of organic sprays. I counted about six. I hope to try lime sulfur during bloom this year . I like the idea of chemical thinning and FB control from a single spray

Yeah one spray would be nice. I sprayed 4-5 times last year then picked off the remaining flowers by hand. I had a big problem in year 3 with too much bloom on 1 yr old wood in the face of lots of tstorms. Now days I try to pick off those sorts of flowers. Most end up being really late to bloom so they’d end up getting picked off for that reason anyway. Of course my flower removal is only doable in a backyard setting.

How often do you spray and when, during bloom? I was looking at the powder online and it says - provides 3-4 days of reliable protection. Not that long… How many sprays you end up with?

Just found a label:
Make first application at 20 - 30% bloom.
Spray trees every 3 to 4 days during blossom time. After petal fall,
continue applications at 10- to 14-day intervals to control twig blight
(this could mean an additional 6 - 8 applications after blossom sprays).
It is much more than 6 sprays

It’s my understanding that research indicates no benefit of spraying strep on vegetative growth after petal fall. The twig blight is mostly from bacteria that entered during bloom or from overwintered cankers elsewhere in the tree, but could also be due to insect punctures. I try to spray anytime it’s over 65F, flowers are open and rain is forecast to occur within 24 hrs if I have not sprayed in the last 3 days. Last year it was pretty dry so 4-5 sprays. I think I did 7 sprays one year that had more rain. I have seen almost zero FB since I started using strep, but I see strikes in callery pears all around town.

Well it’s not just whether it’s over 65F it’s whether it’s been over 65 for any length of time since I last sprayed.

I wonder if on vigorous rootstock could we do strep for the first 5 years until fruiting spurs are set up away from the main trunk. Then switch to organic or just pruning?

Looks like it is not that easy to buy the organic products they mentioned in the article, at least not for home orchard…

"Over the years, we’ve lost thousands of trees to fireblight – we take it
pretty seriously. We’ve learned that season-long applications of a low
rate of copper work pretty well to suppress fireblight. In cider trees, you
aren’t worried about fruit finish – a little copper russeting has no
effect on the value of a cider crop. In any event, a little copper
phytotoxicity doesn’t hold a candle to a fireblight infection – fireblight
is the grim reaper.

There are a few newer formulations (eg. Badge, Cueva)
that contain much lower concentrations of elemental copper than the older
compounds (less metal left in the soil), and appear to be equally effective, and gentler on the trees and fruit. Spray the whole orchard (not just the infected trees). One of of copper’s chief functions is to make an inhospitable environment for the pathogen on the surface of the trees. Fireblight lives (in part) as an epiphyte on all the plant surfaces, so the main thing you’re doing with copper is to reduce the
viable surface population of the bacterium in the whole orchard. Spraying the infected trees alone won’t accomplish that. The most important copper sprays of the season are the early ones (too late this year…), when old
cankers first start to ooze. Foraging insects pick up that nutritious, photosynthate-rich goop, and spread it all over the place – that’s the chief source of innoculum for blossom blight. Of course, nothing is more effective than thorough removal of infected tissue during the dormant season (those days are gone, this year). I think that a lot of infections
that are attributed to blossom blight are actually vascular – i.e. are the result of internal translocation within the tree.

Thorough dormant pruning removes that source. But you’ll never get it all with your saw in the winter – copper is the best backup we have, at the moment. Well-timed antibiotic sprays during bloom will do a lot to protect against blossom infection, but if you use antibiotics, be sparing – if you don’t time them
perfectly, they’re useless, and if you use frequent antibiotics, you’ll contribute to the development of resistance, which affects all of us (just like over-use of human medicine).

For what it’s worth, Paul Steiner (RIP)
always laughed at the practice of sanitizing tools between cuts – since fireblight is on the surface of everything during the growing season (epiphyte), you can’t avoid infecting every new cut, if you prune in those days. So sanitizing tools between cuts is a waste of time. If you decide to cut during the growing season, leave an ‘ugly stub,’ i.e. make a bad
pruning cut, below the point of infection, but nowhere near a healthy trunk or main branch.

This is cool: early in the season, fireblight thrives on sorbate and other photosynthates, but later in the season, the trees are producing so much of that stuff that the concentration becomes toxic to it. The bacterium will advance another couple of inches below the cut, and then stop (die). It’s sort of like other complex carbos for the rest of us
(think about alcohol) – a little bit enlivens us; too much kills us. The ‘ugly stubs’ are easy to find and remove during dormant pruning, when you don’t need to worry about moving the bacterium around with your tools.
Steiner also laughed at the notion of hauling all the infected wood out of the orchard – if it is removed from the tree, mashed up with a mower or flail on the orchard floor, and left to dry, the fireblight dies, pretty fast.

Steiner died in 2000, and for years, other talks about fireblight were mostly regurgitation of his work. More recently, Kari Peter (PA),
George Sundlin (MI), and others have done very good work on fireblight – their stuff is very much worth reading. And google Steiner – every spring, I re-read a couple of his articles, just to reset myself before getting back into the battle. Meanwhile, there’s a lot of lame ‘information’ about fireblight out there – don’t act on everything you hear or read, especially if it doesn’t comport with what you learn from Steiner, Peter, and Sundlin."

Thanks for the info. I tried ugly stub but waiting until dormant here in AL (late dec into jan) left too much time for FB to creep onto bigger wood. Cutting the stub in most cases revealed FB discolored tissue moving down. I’m wondering if an adjustment for the deep South would be to prune out the stubs during a blazing hot dry week in late July or Aug.

I kind of follow Michael Phillips’ spray protocol as outlined in his book The Holistic Orchard. I like the process/ritual and am happy with the results. My pear seems to have greatly improved, my peaches have very manageable amounts of curl, but my pluots still suffer.
I’m in Napa, CA, and am not really sure how my disease pressure compares to other places.

I guess strep was OMRI approved up until a few years ago, but still would like to phase it out for my trees.

It took the ORMI a few years to remove strep and other antibiotics from the approved list because so many large apple growers indicated they may cancel their certifications rather than risk the huge investments they made in their orchards to being killed by FB. Also FB was immune to strep in much of Washington state due to many years of overuse so other antibiotics were required. I believe the new research on organic methods for FB is a big step forward although many sprays are required.

Most of the alternative sprays have been tested in my state and not found to be as effective as strep but I’m not sure if the entire program has been tested.

We did not spray the apples with anything last year and although conditions were perfect the amount of FB was much smaller than expected.

Has any of you read any studies using OxiDate 2.0 type chemistry for controlling fire-blight in apples and pears?

For anyone not familiar with “ugly stub” pruning read this:
https://extension.umd.edu/hgic/topics/ugly-stub-pruning-fire-blight

I built a new home on our property out in the country in 2001 and soon after… planted a few trees in the new yard… and started a orchard just east of my yard.

On the east side of my home, one tree we planted was a Bradford pear… It grew well, and in the spring just loaded with awesome white blooms… it had a odd smell but was sure good to look at.

The prevailing wind here is from somewhat southwest to north east…

Then I researched more and found that Bradford Pears, are carriers of FB… and will pass it on to your fruit trees.

Who knew… I wish I had many years earlier.

I gave up on trying Pears for a while… and early last summer we had a straight wind storm come thru and about half off my bradford pear, split and broke off. I removed the rest with my chainsaw and several hours of hauling off the wood.

If I do replant pears… and I may in a few years… I will plant them away from my other fruit trees, perhaps down wind of my main orchard and see if that helps… and I will not have any bradford pears on my property.

Good Luck with pear success. For me it has been a struggle, and failure…but I don’t give up easily.

Graft over that Bradford to edible pears