There are about 100 pawpaw cultivars available from retailers in the U.S. plus several more numbered specimens in various repositories. Reliable genetic micro-sequences were obtained for 36 of them about 20 years ago by H. Huang at the USDA ARS station in Frankfort KY. From these measurements I’ve determined there are 5 genetically dissimilar groups among the 36. Further testing could reveal additional groups in the other cultivars.

Individuals in each group might or might not appear physically similar or have similar tasting fruit. Instead these micro-sequences are concerned with ancestry and basic coordinates within a cultivar’s cell DNA. I have chosen one or two cultivars to represent each group:

Group 1. Middletown, although the genetics of this cultivar were apparently re-enforced repeatedly in Peterson’s breeding and thus most of his cultivars appear in this group. Shenandoah is another good representative.

Group 2. Sweet Alice. This cultivar is basically in a group by itself, with its closest relations being crosses made by Gordon et al.

Group 4. Taylor from C. Davis. Note that Davis sourced plants from SE Michigan, quite far from those above. The cultivar Wilson (or at least what is circulating as “Wilson”) could be an undocumented progeny of Taylor.

Group 5. Wells and Mitchell. These two have minor differences, they are close enough to be siblings (although they probably are not).

Here’s a few visualizations of these groups. The distances between cultivars are given in number of marker mismatches. There are a total of 45 markers in this analysis. The maximum mismatch is 22.

Note that cultivars not in these groups are in-between them due to various crosses. 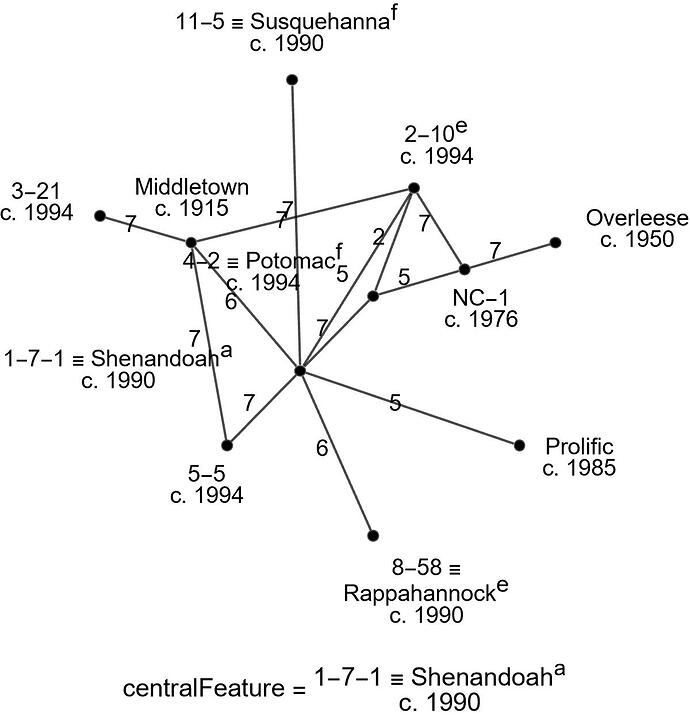 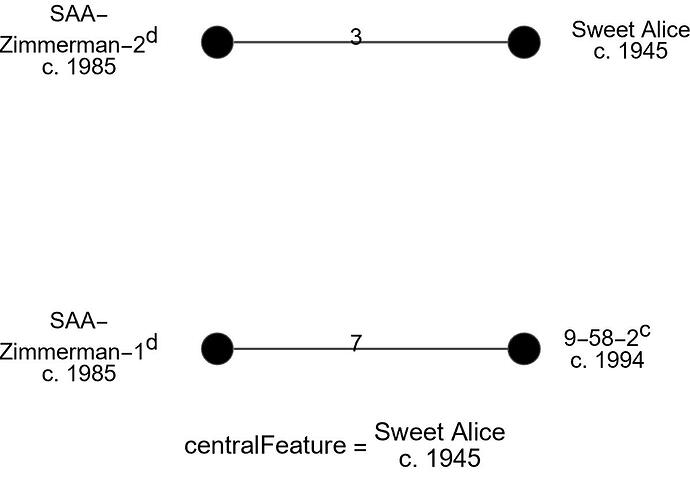 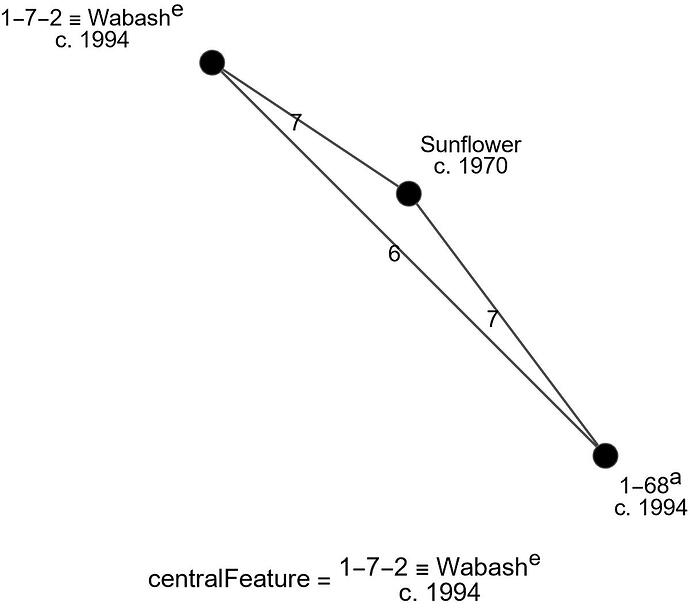 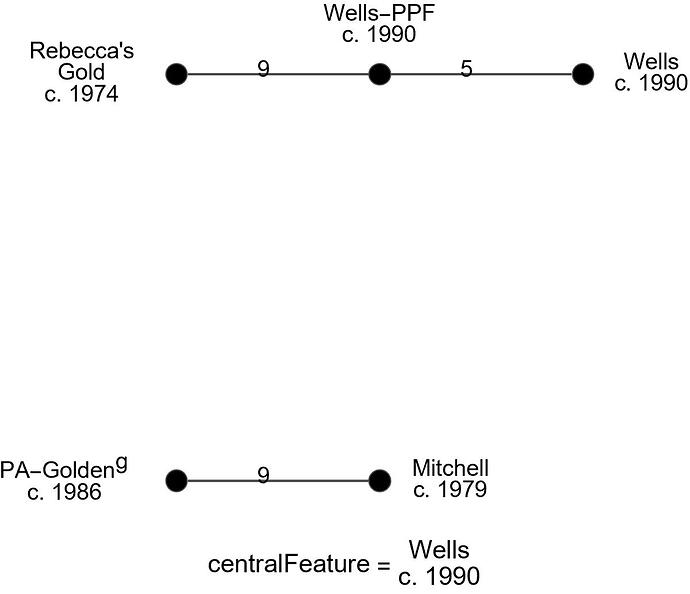 Connecting to prior discussion – if I read my notes right, your Group 1 and Group 4 both seem generally high in annonacin. Your Group 2 and Group 3 seems generally low.

Can you explain these” line and point diagrams with numbers “ ?
I really don’t understand what they really mean ?

What article(s) are used in the “prior discussion” of annonacin levels in fruit of specific cultivars?

Can you explain these” line and point diagrams with numbers “ ?

Thank you for asking, I initially left out the following:

The distances between cultivars are given in number of marker mismatches. There are a total of 45 markers in this analysis. The maximum mismatch is 22.

I was relying on the above from an earlier post. Nothing new, if that’s what you were hoping.

your Group 1 and Group 4 both seem generally high in annonacin. Your Group 3 seems generally low

an old statement from KSU

Well this may make sense to you .
It looks fancy and all.
But I can not make any sense of what it all means ?
I would like to understand the significance of this .
Too many numbers , notations , etc that have No meaning to me .
I am not familiar with these types of diagrams

@Hillbillyhort
Each point is a named pawpaw whose leaves were used to obtain plant cell DNA. Several dozen previously determined locations (markers) in the DNA of each plant were examined. From this a list of which markers of each pawpaw match and do not match was created.

In the diagrams, the number of mismatches between selected pawpaws are shown. In this study (not necessarily other studies) values from 2 to 7 are considered close, from 8 to 11 are moderately close.

I’m assuming this data just reflects gene diversity, but are there any physical traits that are reflected here, like is one sector entirely orange flesh while another is entirely yellow flesh?

I’m assuming this data just reflects gene diversity, but are there any physical traits that are reflected here

“Individuals in each group might or might not appear physically similar or have similar tasting fruit. Instead these micro-sequences are concerned with ancestry and basic coordinates within a cultivar’s cell DNA.”

You’re right that there is no direct measurement of annonacin. In this paper, for example, Brine Shrimp Mortality is used as a marker for annonacin content. From Table 3, it appears that it takes roughly 10 times as much pawpaw pulp from Zimmerman, Wells, and Sunflower to attain the same lethality as Middletown, Overleese, and NC-1.

You’re also right that these relative measures do not help us understand whether the absolute levels are safe. But if (a) we agree that annonacin is a risk, and (2) we still hope to consume pawpaws, then it seems we should prefer varieties from the relatively low groups.

Finally – as a “pawpaw breeding consideration” – your genetic clusters seem correlated with annonacin levels. It would seem that a breeder who wants to produce a low-annonancin variety should use parent plants from the low groups (i.e., 2 & 4).

if (a) we agree that annonacin is a risk, and (2) we still hope to consume pawpaws, then it seems we should prefer varieties from the relatively low groups.

You do not know if the levels are safe and thus your conclusion is false. It could be true that all of them, some of them, or none of them are safe.

If you were to apply the same concerns to other fruits, then there are quite a few you’d avoid e.g. Persimmons.

On the topic of historical breeding, here is a look at distances (number of genetic marker mismatches) between Middletown, Overleese, and their close neighbors. Keep in mind the measurements are coarse - so they might only be accurate to +/- 2. The layout of cultivars in the image is arbitrary and the lines are (obviously) not to scale. It is a topological graph.

Notice the connection of Middletown to NC-1. From this I speculate that C. Davis used Middletown in the breeding of his “Davis” cultivar, which is a known parent of NC-1. 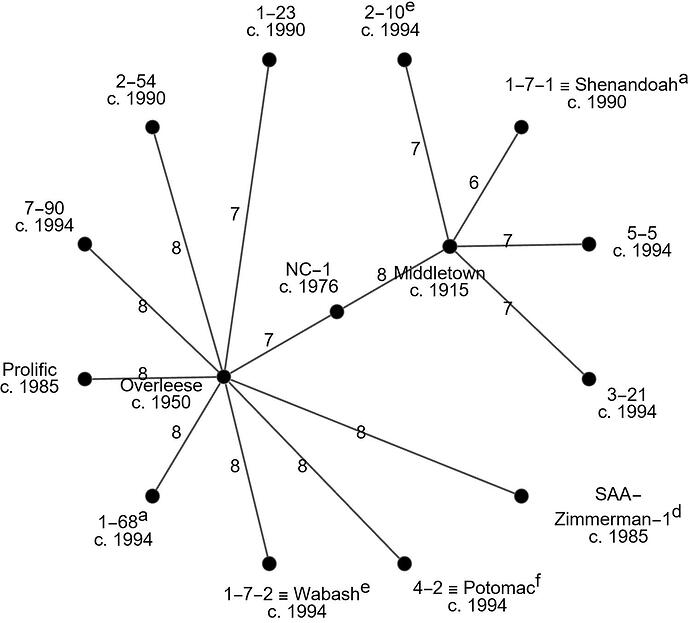 This is an induction fallacy. The classic example is: A. Lincoln wore a beard, therefore all men wear beards.

An induction fallacy. In this case, correlation does not imply causality.

Yes you can, here it is: Pomper’s SSR data.
The zeroes are missing values. Only 3 of the tested cultivars have a full set. The number of markers (2x5) is grossly less than the number of specimens (41), consequently it is mathematically under-determined and any analysis will be highly speculative. Further, Pomper et al did not use a mathematically sound method (a metric) to compute “distances” between cultivar markers. Finally, they used a faulty clustering software (Camen and Sokal pair grouping) to create cultivar groupings - and then unjustifiably split one of the groups. So the results of Pomper et al cannot be viably compared to any other study - regardless of any similarities that exist.

Yes, that is clear.

There is a more constructive and informative way to have a scientific conversation. Assumptions are a potential starting point and are present in all research.

This graph concerns distances (number of genetic marker mismatches) between Overleese and other cultivars tested by H. Huang. Values from 2 to 7 are considered close, from 8 to 11 are moderately close. Keep in mind the measurements are coarse - so they might only be accurate to +/- 2.

At the top right is “1-23”, whose only documented parent is C. Davis’s Taylor.
At 3 o’clock is C. Davis’s “Prolific” of unknown parentage.
Notice also the cultivars from J. Gordon who is known to have Overleese but also Zimmerman: PA-Golden, SAA-Zimmerman-1 and -2. The latter are crosses of Sweet Alice with Zimmerman. Unfortunately, H. Huang did not test Zimmerman or Davis. 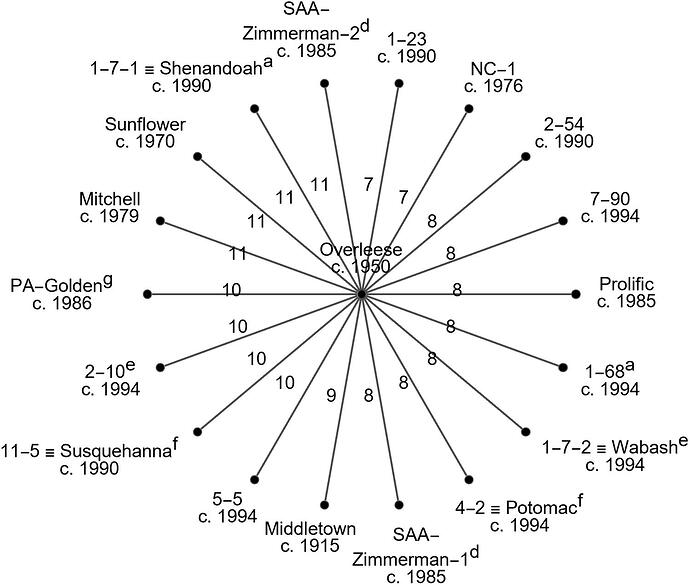