I pulled up two vines this morning and the first thing I noticed was that the peanut sizes were small to what I consider normal. Is this how they should be? 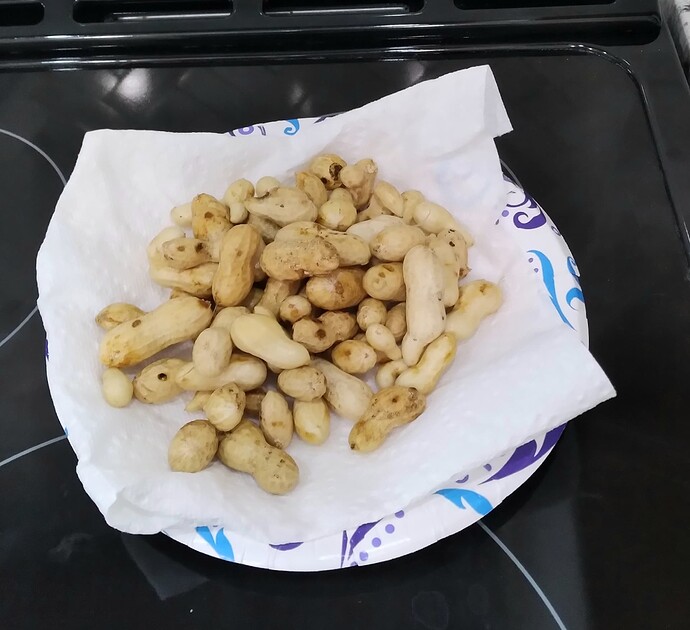 Different seed source? Or do you save seed? Is the the Virginia peanut or a variety for the South?

Also, did you plant late? Water might be issue too…no growth until recently after it began to rain? I’d leave them alone awhile…look immature in the photo.

The label said raw jumbo peanuts that were from Publix. The grands and I picked them up as a fun project. Next year I would like to plant more with whatever variety I need to do well.

Thanks and I did plant late and the vines are still growing.

Yeah… it’s been over 30 years since I grew any, but seems like we always waited until the vines started yellowing to dig them.
I always tried to find Virginia peanut seed to plant, as I felt like they were bigger, though I think Valencia type are supposedly the best flavored for boiled peanuts.

seems like we always waited until the vines started yellowing to dig them.

I have about 15 plants so I would like to learn when to pick this season for next years planting. I like peanut fresh, dry, boiled, and peanut butter. They appear to be pretty easy to grow.

We always got really big ones but many years our hands were cold and frozen from harvesting so late. Voles have been a problem targeting my root crops like sunchokes, peanuts, potato, sweet potato etc. But not garlic they hate that. The secret might be to grow my peanuts between large rows of garlic.

I taste tested some of the ones I picked and most are still not ready. In most years we will have at least another six weeks before frost so I’m just going to let the others continue growing.

There are four common types of peanuts, Runner, Virginia, Spanish, and Valencia. The “jumbo Virginia” type typically has 2 nuts per shell and usually are large to very large. I don’t like the flavor. My personal preference is for some of the older peanut types such as the Dutch Fork peanut Rodger Wynn occasionally provides to Southern Exposure. I’ve also had very good results from Bramling Pink and Black peanuts from Sandhill.

Peanuts do not show plant maturity. The runners elongate and new peanuts “peg” from them until the plant is killed by frost. The way to harvest peanuts is to watch for the first nuts that germinate in the shells. When you see this, it is a sign that the maximum harvest will be available.

The way to harvest peanuts is to watch for the first nuts that germinate in the shells.

We roast ours in the oven once we harvest them.

You mentioned “JUMBO” so they are going to have to have more than 150 days from planting to harvest.

The Virginia peanuts, if I had planted them in April, I’d be digging now. But in Alabama, Oct or Nov seems like OK. (So long as the nuts don’t start sprouting inside the shells in a wet fall.)

I suspect you harvested too soon.

I’m just guessing but I think the variety I planted from Publics is Virginia. It appears to match the description below.

I’ve grown a JUMBO of some sort bigger than a man’s thumb. One to 3 nuts per shell.
Your photo looked a bit like it. (Been years since I grew peanuts…but at one point I’d harvest a bushel or so every fall for eating in winter…raw usually.)

I just harvested my peanuts today. Just 3 plants. The seed was sent to me by my neice and it is one of the black skinned (really dark violet) types. I started them inside in early April and planted them out in early May around the same time as peppers and tomatoes. Most are good, but a small percentage had some type of insect get in and eat them in the shells. Fun to grow, but with limited space I’m not sure I’d dedicate the square footage to them every year. Unless these turn out to be exceptionally tasty that is. 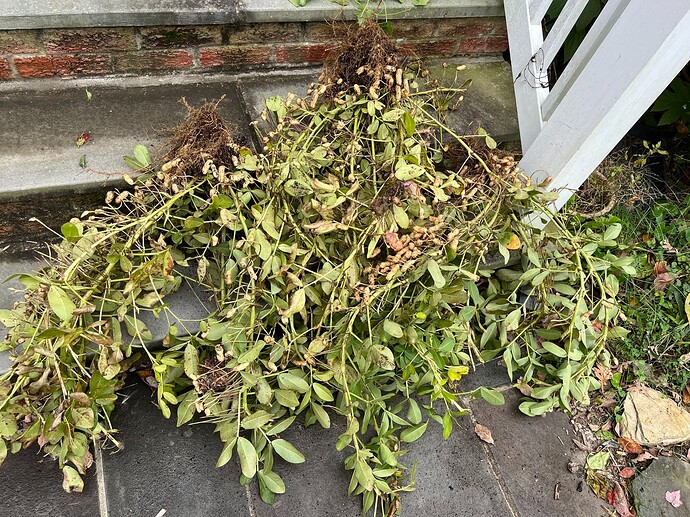 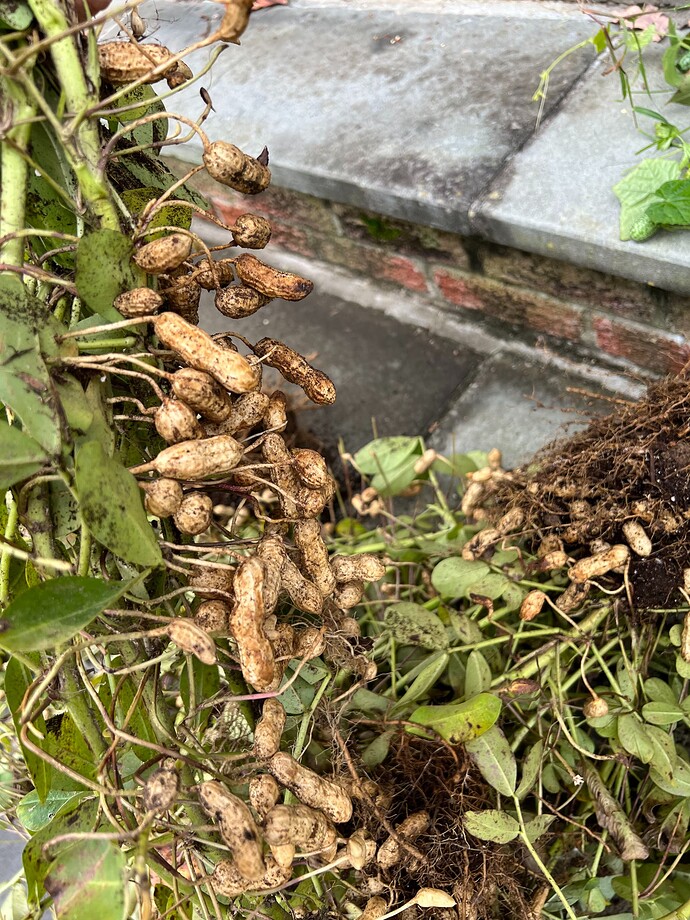 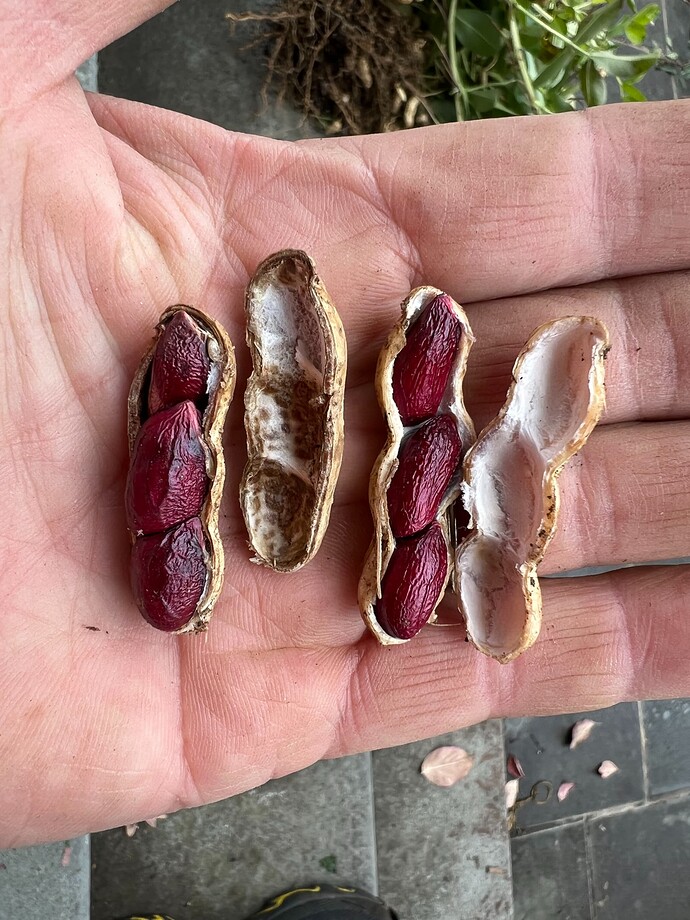 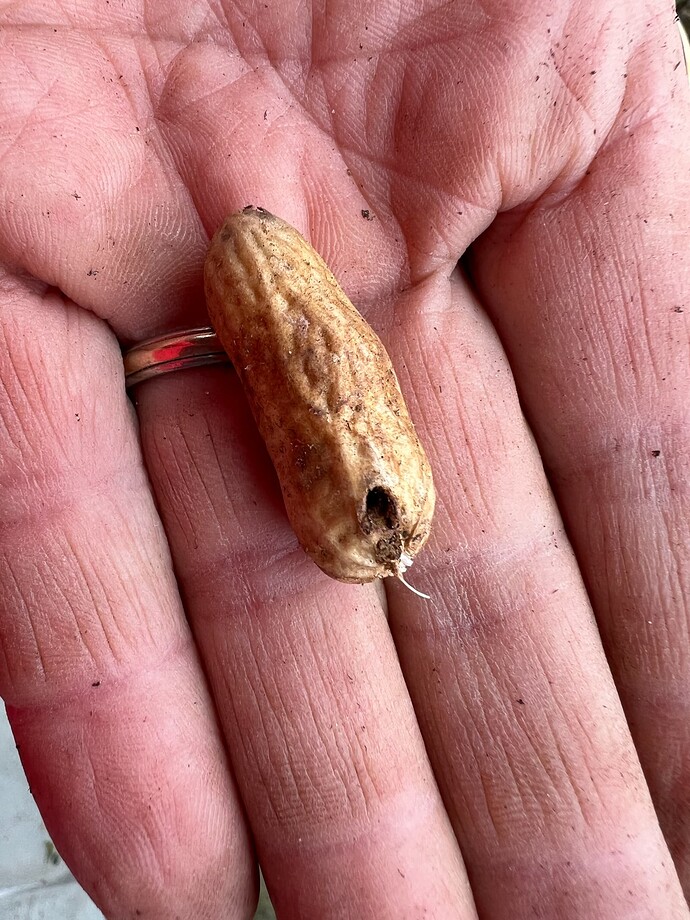 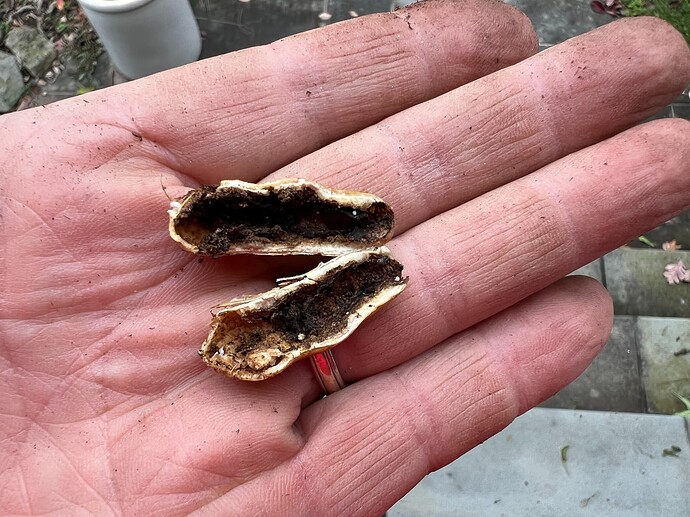 And I did find a few already starting to sprout, so I guess based on @Fusion_power 's indication of harvest time, I got the timing about right. 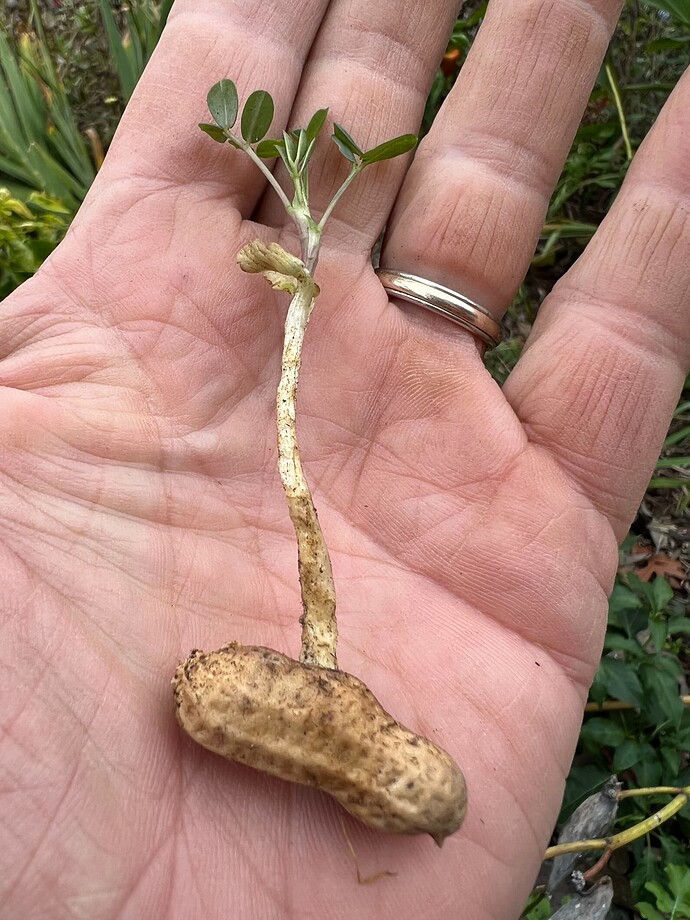 I assume you call the long branches “runners”? Either way, my best production came from those branches when I put a rock on the far end of it to hold it close to the ground. Otherwise a lot of the pegs never made it back into the soil.

Now you have the fun task of separating the good peanuts from the partially filled softies. A good peanut will have a fully hardened shell while the softies will be easy to compress. Softies taste bitter and won’t keep. If you dry them, they shrivel to nearly nothing. To give a comparison, when I grow peanuts to sell as seed, I commonly harvest 7 gallons of peanuts and have 2 gallons good enough to plant. Usually another 2 gallons are good enough to eat but not good enough to sell.

I had some similar insect damage but most were okay.

As a teenager I’d grow maybe a bushel of good ones, dry and eat them. Raw. Sitting beside the coal fired heating stove on a cold day, mighty tasty! I’d keep enough to plant another patch the next spring. Virginia peanut mostly.