LINK TO THIS AND ARCHIVE OF MONTHLY REPORTS IS : http://blogs.cornell.edu/jentsch/

Temperatures will be averaging in the low 80’s this week, ideal conditions for adult Pear Psylla to continue laying eggs as the 2nd of 3 to 4 generations develop this season.
The onset of this second generation Pear Psylla is now in full swing. Egg numbers and nymph hatch have begun to skyrocket as we move from June drop to pear downturn. We have seen psylla eggs average 55 per leaf with nymphs exceeding threshold with 5 per leaf in our untreated Bartlett research plots.

We are approaching the most difficult part of the year for psylla management. This is due to a combination of factors including the increasing number of leaves and expansion of the canopy. As we see increasing nymph numbers, at various life stages of development throughout the tree, we find them present on the newest expanding leaves containing very little in the way of insecticide residue.

Foliar density leads to insecticide shadowing. The pear psylla, which have the greater potential to survive into the 3rd generation, are those dwelling in the center and very tops of the trees, well protected from control measures as the season marches on.

The concentrated sugars that psylla produce, in the form of ‘honeydew’ or droppings, will act as a substrate for sooty mold to grow on foliage and fruit. The mold will cause a phytotoxic response on foliage in the form of leaf scorch and fruit russet, leading to early defoliation and smaller discolored and misshapen fruit.

This period of the season, during this explosion of 2nd generation, is critical to maintain control of psylla for the remainder of the season.

Agri-Mek: Don’t delay making the second Agri-Mek application for pear psylla control if you have not yet done so. This is an important management tool, applied at 21 day intervals, to manage nymphs as they emerge onto unfurling foliage. Agri-Mek is also a valuable miticide to control two-spotted spider mite and pear rust mite. It requires a penetrant such as 0.25% of horticultural oil or penetrating rate of adjuvants such as LI-700 to effectively move into the leaf for psylla nymphs to consume and increase penetration as an adulticide.

CM & OBLR: The obliquebanded leafroller emergence is underway while codling moth is winding down. The use of Delegate 35WDG with a penetrant will also provide good pear psylla management when used against these two lepidopteran.

Suckering: As psylla concentrate in new shoot growth, growing water sprouts within the tree center make ideal habitat. The sprouts are still quite succulent and this is a good time to quickly hand-strip shoots from the tree to reduce psylla populations. This should help in reducing late summer pruning and reduce the potential for shoot blight infection, yet needs to be done during dry weather.

Maintain Fabraea Leaf Spot control with protectant fungicides. This is likely to be the last week that Manzate can be used on early maturing cultivars like ‘Bartlett’ due to the 77 day PHI for mancozeb. Switching over to other products such as Topsin M WSB at 1.0 lb/acre, Ziram 76DF at 24.0 oz/100 gal.water, Syllit FL at 3 pts/acre or Pristine 38WDG at 14.5-18.5 oz/acre when applied to control sooty blotch will be required to maintain control of fabraea maculata.

1st instar psylla nymph
1ST INSTAR PSYLLA NYMPH
Managing summer psylla using oil alone: The advantages of using oil to control this insect are many. Oil is still a relatively inexpensive material for which there has been no mechanism for resistance development by the insect.

It provides a degree of egg laying deterrence to treated foliage and wood lasting a week or two depending on rates and weathering. Rates used at 1% dilute with high spray volume will reduce populations of San Jose scale, European red mite, pear leaf blister mite, and Comstock mealybug.

Pear Psylla Mgt. HVRL - 2016
PEAR PSYLLA MGT. HVRL – 2016
Contact of the adult by oil droplets often causes mortality while applications over top of the egg reduces adhesion, often causing the eggs to dislodge from the stem or leaf. The 1% oil will also smoother the early nymph stages.

Yet, in some years, the negative observable impact of oil applications has been shown to cause enlarged lenticels on developing stems, which may have impact on plant respiration. At rates above 1% we have seen enlarged lenticels on Bartlett fruit. Employing highly refined ‘summer oils’ at 1%, such as BioCover MLT Petroleum Oil (Unsulphonated Residue 99.0%) reduces the risk of fruit finish russett.

Ovicides can be employed to kill the eggs prior to hatch. The use of Esteem and Centaur work as insect growth regulators (IGR’s) to inhibit development of various life stages. Esteem 35WP will kill the egg stage of psylla and reduce the viability of eggs laid by treated adult, should be applied prior to sustained egg laying with 0.25% v/v horticultural spray oil. Esteem may be applied once at delayed dormant to “pink stage” at 5 oz/A, or two applications at delayed dormant to “petal fall” stage at 4-5 oz/A, as a tactic for both psylla reductions and as a resistance management strategy. Remember, its mode of action is as an ovicide, so it will not reduce the adult or nymph population directly. Most effectively use of Esteem is to apply material to wood or foliage prior to the eggs being deposited.

Cool weather (pre-bloom) provides conditions to optimize the use of pyrethroids. However, the use of these insecticides over the past 20 years has diminished dramatically, decreasing pear psylla susceptibility, especially to the older pyrethroids such as Asana (esfenvalerate) and Warrior (Lambda-cyhalothrin).

Even under the best of conditions, using the highest labeled rates, we have seen outright failure using these insecticide tools on psylla. Their use should be limited and used only during periods of cool pre-bloom temperatures (<60F). Demise of Late Season Free Labor: Late season use of these tools will reduce predation by cocinillid beetles (ladybird beetles adults and larva) and lacewing. Keeping the predators toward harvest may provide psylla control in years when lingering nymphs of 3rd and 4th generation are unmanageable. 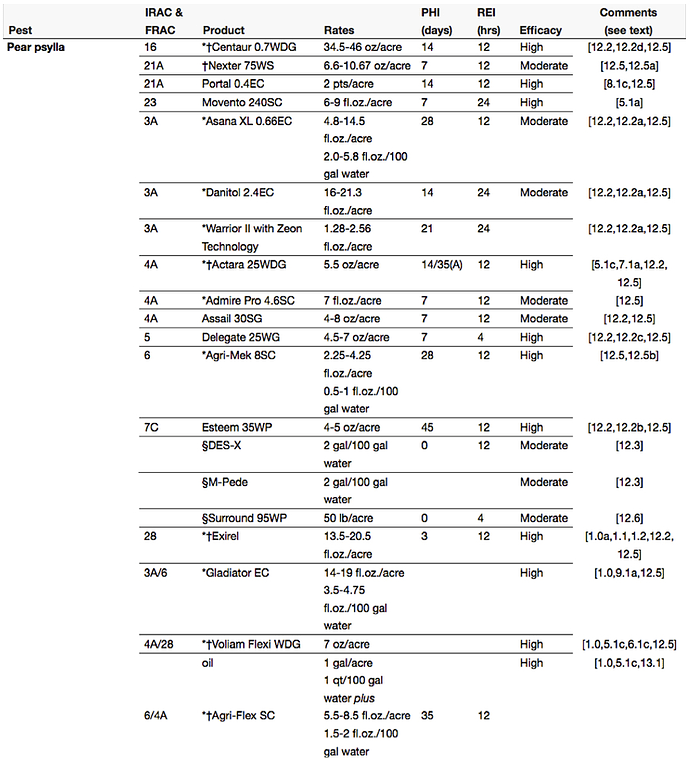