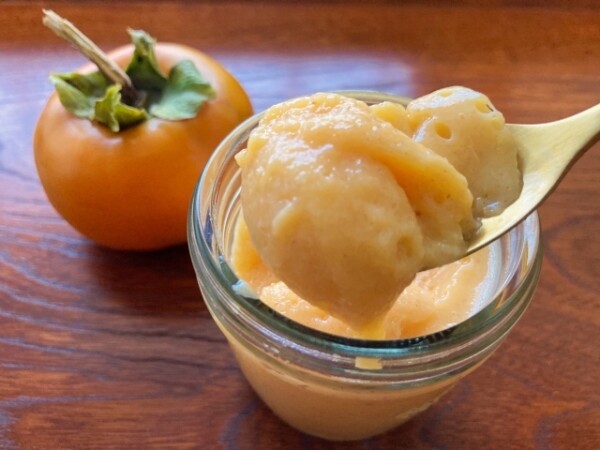 Turn a persimmon into a pudding with one simple ingredient

No gelatin necessary for this no-bake Japanese purin recipe!

Just found a very simple recipe for persimmon pudding that looks very good, figured I’d share as it would be an easy way to use a large amount of fruit and create a value added product if you wished to sell it too.

Thanks! I was hoping to find something exactly like this.

Edit (next day): I blended a mix, winging it somewhat on proportions. I happened to have 2 cups of mashed Prok (American) sitting in the fridge. To this I added 200 ml of milk, 1 tsp of Splenda, and 1/2 tsp of vanilla. Now it’s in the fridge. The most interesting take-away tis that my wife, who hated the consistency of the ripe American persimmons, though that the mix tasted good.

We do it like this:
Cold Persimmon Malt:
1)
Freeze the ripe soft persimmon.
Then get it out and run it under hot water a second to peel off the skin. Then quarter up. Or peel and quarter up before freezing is easier.(quarter a haychia, to make it easier on the blender, but a smaller Prok or Rosseyanka doesnt need quartered, just peel and freeze)
2)
A) Then fill blender 2/3 to 3/4 full of quartered frozen persimmon.
B) Then put enough milk to barely cover the fruit…
C) Blend… If it is too thick to blend add a little more milk but i want it as thick as the blender can manage…, the thicker the better…

Optional you can substitute 1/4 of the milk for cream…
Also optional you can add a spoon of sugar or a dash of vanilla, but its not necessary if your fruit is ripe, especially if it was over ripe before freezing…
D) Enjoy…
We freeze overripe bulk discount bananas all the time too for this treat… And strawberries. Persimmon is the favorite though…

Oh, man. I gotta try that. More importantly, I need to make sure I don’t forget this while I wait 2-5 years for my trees to start producing!

If the link does not work go to Way way back machine , )

your site looks good though
just thought the title may of been misleading for some people that knew that site,
and some people may of not been able to access it if they did not know of wayback machine
(like a big discussion of not being able to access Jack Kellers Wine making site,
because it wasn’t secure or http"S")

Okay back to the that sites recipe about making Persimmon pudding with just milk, and no heating, with it setting , and and using Coconut or soy milk

I think you could have it set if you added (organic) (metamucial ) Musculige Or psyllium husks
if you’ve ever made a smoothie with it , and let sit it becomes thick.
(seeds of plantago ovatum /p. major)
(I would not use the orange flavored type, but buy at a health food store raw )
(of coarse a thickener like arrowroot, corn starch, also should work.)

If you are going for a vegan option those might work. Maybe there is something else with the calcium to react to thicken as well. I’ll stick with good old milk when I try it.

@disc4tw – As noted above, I’m trying the recipe.

One further observation: The notes say that as the mix cools, “the pectin in the persimmon reacts with the calcium in the milk, solidifying it without gelatin or agar.” In a prior thread, I had discussed my failed attempts to create a palatable puree from a combination of (a) fully ripe and non-astringent; and (b) almost fully ripe and still slightly astringent fruits. Trying both alcohol and gelatin, I couldn’t find a way to remove there residual astringency. One respondent then suggested using baking soda. I tried but baking soda – sodium bicarbonate – tastes salty. So does potassium bicarbonate. Then another respondent suggested calcium carbonate. This note leads me to think I should try it.

Maybe Goat milk for me or sometime in the future cow milk for me as well
If people come down with a runny nose , and drink cow milk can be bad for some people
Makes Mucus (casein Protein is what is in the cows milk)

Not that I am currently sick , just saying
, but all in all if I could get cheap milk right out the cow
or without hormones (for cheap) that might be a different story

By the way about how mucus can become thick
I wouldn’t think A opera Singer would down a glass of milk before they sang they would be coughing all that phlegm up, and not be able to sing .
That being said I am no Opera singer I just do not want to deal with all that phlegm from drinking cows milk (for me at least I hope your pudding turns out good)

All milk has casein, but the exact form varies. And yes, some people are allergic to the casein in cow’s milk. Thankfully, I’m not one of them. I eat 2-3 cups of yogurt per day plus milk in my coffee and sometimes in cereal.

The frozen style I described, mom makes hers with A2 cow milk, or almond milk, or even soy milk, often. The other night we were out of milk so i used half & half.
The fruit being frozen acts as a thickener if you like a cold style like that.
Yeah i do get mucus from regular walmart cow milk sometimes. I get less if its raw milk or a2 milk or yogurt or cheese. So yeah when i get sick or allergies I switch from milk to lemons lol

I bet the sugar is important if only for tying up water. I’ll have to see if I can find a recipe that’s more clear on the science and what the non-negotiables are.