This spring I decided to plant as many of my potted trees and bushes as possible. Many, if not all were grown in fabric pots. I’ve seen plants send roots right through them in the past, so I figured that the easiest way to do it was to just dig a relatively shallow hole and put the pot in.

It hasn’t worked out how I thought it would . Many of the trees and bushes put on little or no growth. A couple of the peaches even died. 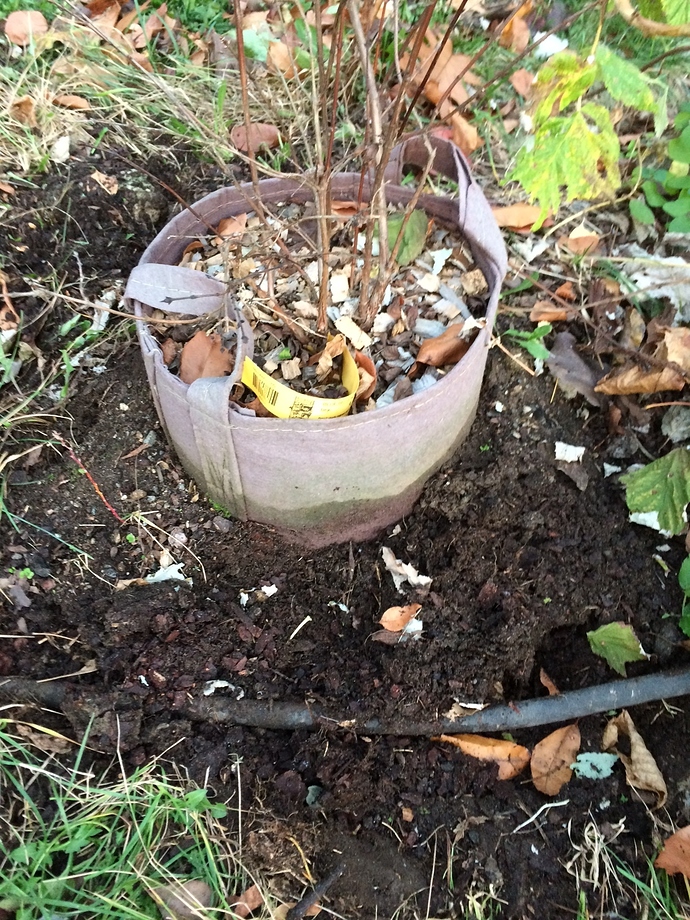 So, today, I gave one of the potted honneyberries a pull and the pot came right out with almost no resistance. 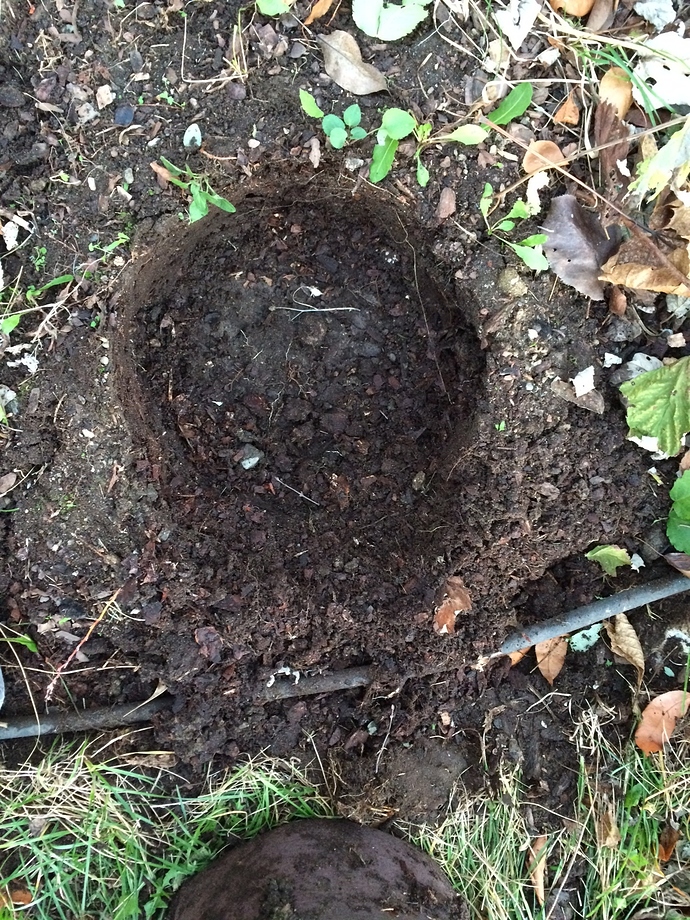 It turns out that the roots didn’t try to get out very much at all. I pulled up 4 of them and this was the most roots that any had coming out the bottom (and some of them could be grass or weeds…). 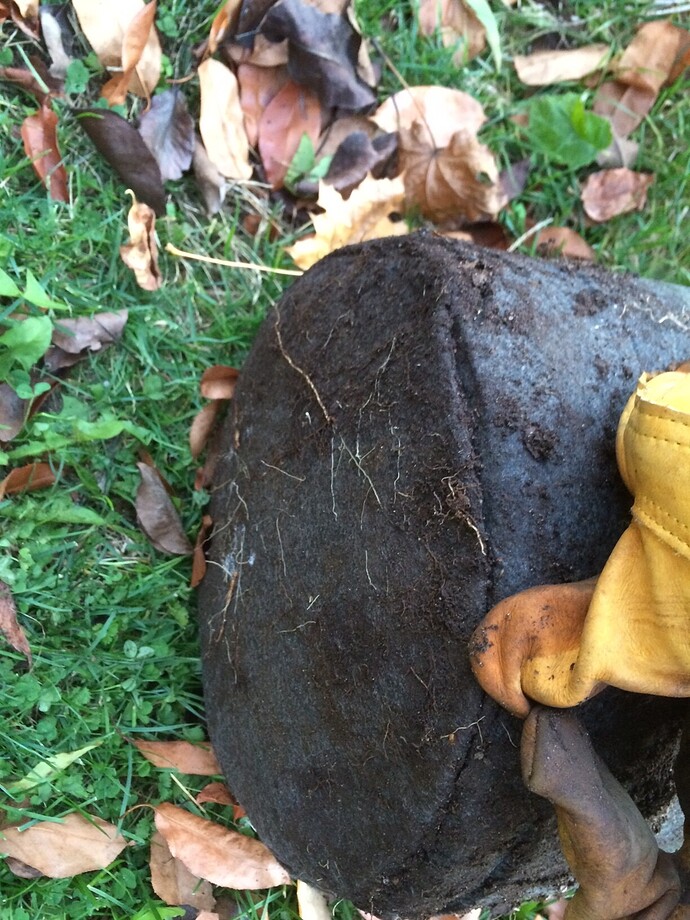 When I pulled the plant out of the pot (after rolling it around to loosen it up), the root system looked pretty good- nice and fibrous, without any large circling roots. 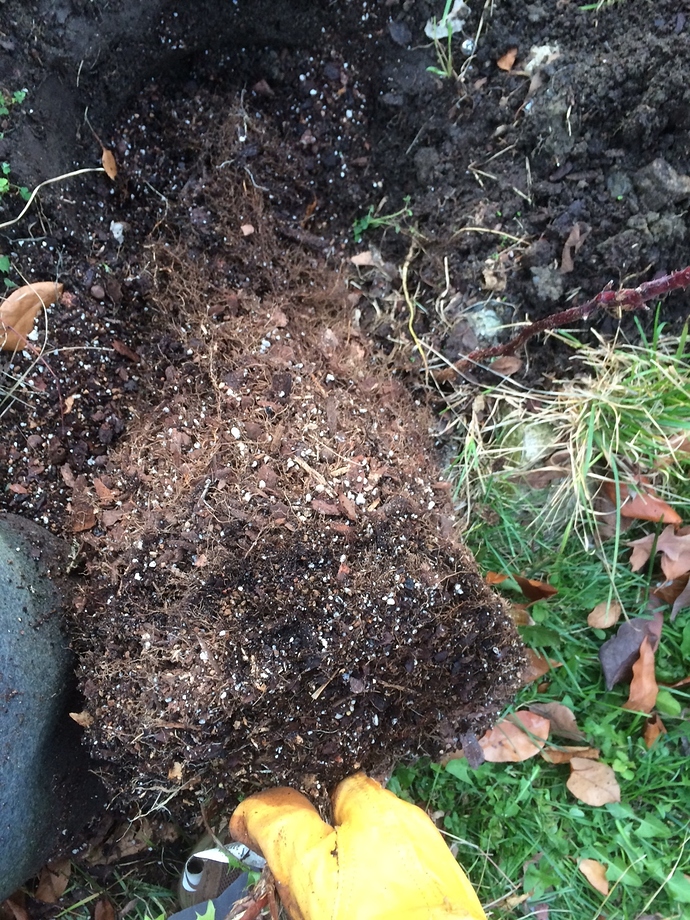 So, while I know that trees can send roots through pots, they don’t seem to do so very quickly. Maybe there was enough water in the pot through osmosis that it didn’t need to go looking. Plants which are just sitting on top of the ground may have more incentive to bore through.

I think I’m going to go around the yard and see if a lot of the other fabric potted trees need to be replanted. In the future, I think I’ll only plant the pot in situations where the tree has already made it through the pot.

I will be interested in your findings,Bob.I have about a dozen one year old fruit trees in plastic nursery pots and some are going to be transferred to fabric pots.It’s a situation,that they can’t go in the ground right now. Brady

What was your reasoning for planting them so shallow? Some of the fabric pots are made to break down more quickly, I would venture that you could plant those pots and get away with it. However the pots you have in your pictures look pretty heavy duty.

I produce trees in another kind of inground fabric container that is not made to disintegrate- bags must be cut and carefully pulled away from root balls, but the trees are very easy to pop out of the ground. They were invented by the plant container expert, Carl Whitcomb.

The roots grow right out of the pots but the pots girdle them as they get thicker than the diameter of the holes in the knit. His original bag was more root restrictive and difficult to use without a drip irrigation system and was a spun fabric without holes like yours.

Why would you think you could leave the trees in the bag- are they made of something rapidly biodegradable?

You could leave them in the bags if you cut some holes for roots to escape, but it might weaken the root system if the holes eventually girdled the roots when they got to that diameter.

Why would you think you could leave the trees in the bag- are they made of something rapidly biodegradable?

The pots are bio-degradable, though from what I understand it is a much faster process when they are underground. Kept above ground, they should be OK for 4-5 years, though I did have one batch where there was an issue with the UV protection and they started to come apart after 1 year.

You could leave them in the bags if you cut some holes for roots to escape, but it might weaken the root system if the holes eventually girdled the roots when they got to that diameter.

I was mislead by the roots sometimes appearing to go right through the pots. Here’s a pic of a multi-graft pear on quince rootstock, which I’ve had potted for a couple years. As of this spring, there was little, if any roots coming through. Now, they are nice and thick and held onto quite a bit of soil when I tried to pick it up. 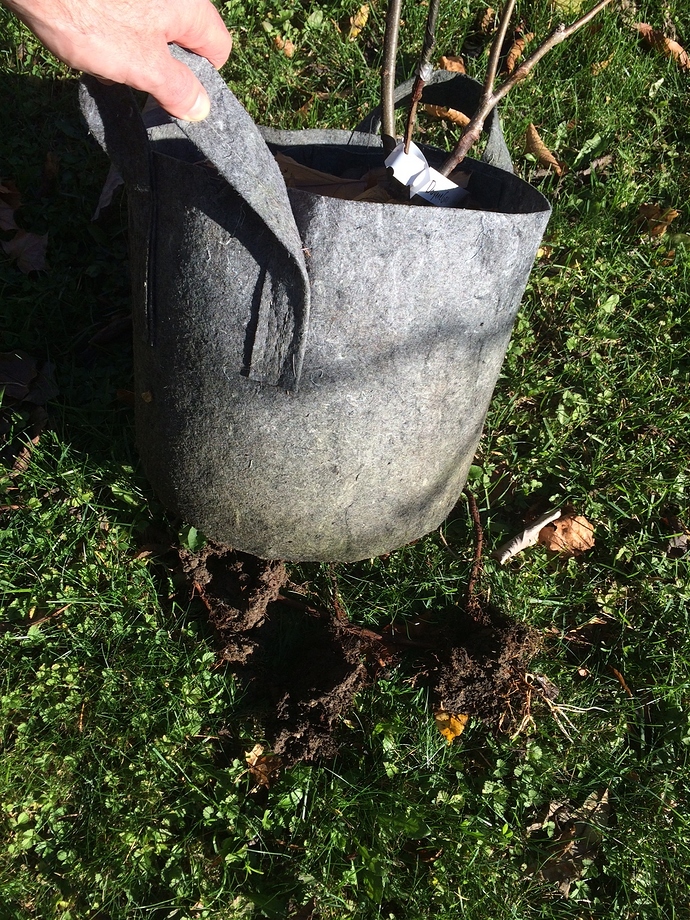 If the trees would do this once the pot is planted, then I don’t think that I’d be seeing any issues. But, as mentioned above, I think that this level of rooting happens more often when the pot is above ground.

What was your reasoning for planting them so shallow?

An aversion to hard work (digging)

Actually, (in addition to my first reason) I knew that the soil in that area was sometimes a bit on the wet side and wanted to make sure that it was planted high enough to be well drained, yet low enough that the roots had plenty of connected area to root through. In other places, I’ve matched the pot’s soil level to the ground level. I need to give them a test pull and see, but I bet that I’m not getting much rooting there either, given the lack of growth.

Some of the fabric pots are made to break down more quickly, I would venture that you could plant those pots and get away with it. However the pots you have in your pictures look pretty heavy duty.

These are fairly sturdy (Boxer Brown), but the above pic is the same variety and the roots went right through. Maybe some of my early successes were due to the pots almost falling apart when I planted them and because plums are generally very vigorous anyways.

A year and a half later, here are some other illustrative pictures.

A row of G65 (mini-dwarf) apples which were planted in fabric pots. These actually have an extra growing season vs the direct plantings, but are lagging behind. 2-3’ vs 4-6’, literally half the height… 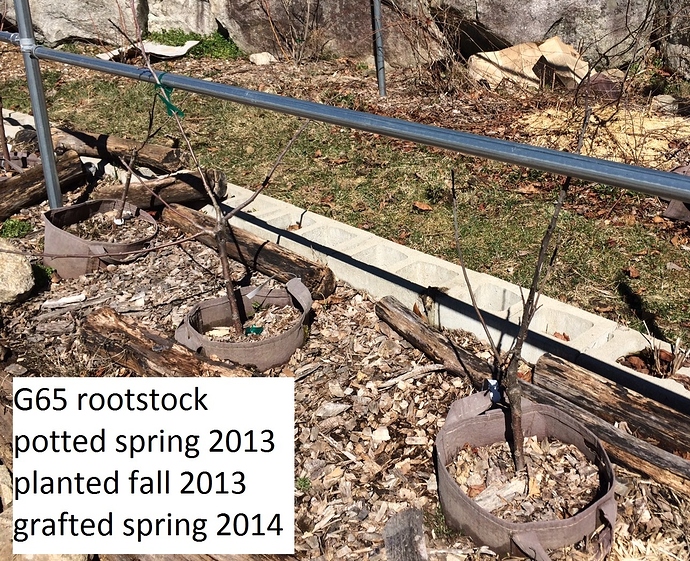 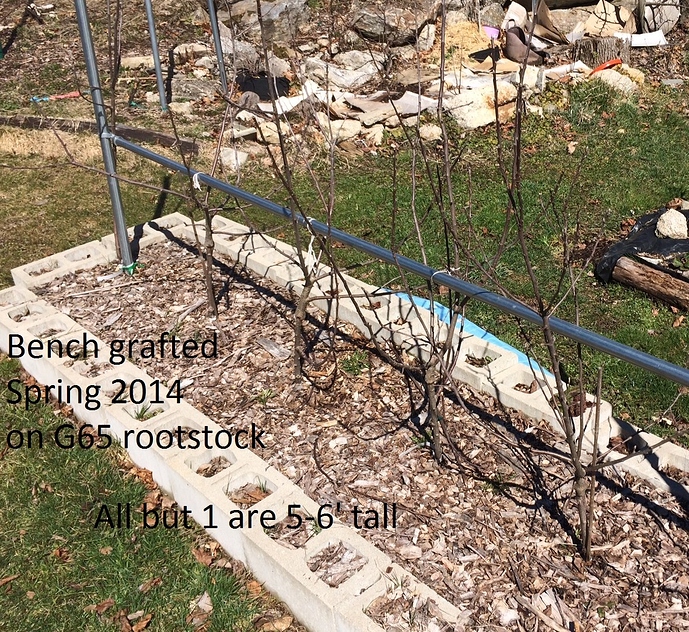 Note that the horizontal bar is about the same height in both pics and the rows are within 20-30’ of each other in the yard.

I’m planning to give a few of the weak growers a yank and replant without the bag if I don’t feel anything holding it strongly. I feel kind of bad that I’ve let it go this long, but aside from being lazy, I was also worried that it had rooted through and I’d disrupt it. After 3 years of “growth”, it’s obvious that it isn’t cutting it, while the other trees are ready to bear and actually need some pruning. I should have offered scionwood from them, but I didn’t even look at them when thinking of things to prune.

Those types of bags require drip irrigation to stimulate decent growth, The first in-ground bags I used in my nursery were Whitcomb’s original design of a heavy solid fabric that didn’t allow small roots to grow through them- apparently like yours. Periods of drought would stunt the trees in my non-irrigated nursery. His second design uses a very strong mesh fabric that allows roots to grow through but girdles them as they expand. They are not very dwarfing at all, but you lose a ton of roots when you dig them up. However, if transplants are reliably irrigated, they recover quickly- supposedly because roots store extra carbs inside the bag from the girdling affect.