Hi everyone! I need your help picking an apple tree. I live in Montreal, Qc and I’m in zone 5. Last year I planted a pink pearl and cripps pink. After discovering this forum and doing a bit of research, I have realized that I did not make very good choices. So I am looking for recommendations for an apple that has a similar flavor profile to cripps pink, is firm and crisp, not a triploid, has good disease resistance and that will store well. Does this exist, or am I dreaming? I also really like Mutsu (just to give you an idea of the kind of apples I like) but I don’t want to plant a triploid in case I end up removing one of my current trees. Thank you!

Golden Delicious might be good since is considered self pollinating and a good pollen donor. Probably tolerant of your zone.

Thanks for the suggestion. I do like Golden Delicious, but would prefer something that has a bit of tartness along with sweet.

I would look at Hubbardston Nonesuch, it is something in the vicinity of Cripps Pink in flavor but with more flavor overall (i.e. better to me). It is not super crisp but to me at least is OK in that regard. It is firm and is a reasonably good keeper… not as good as Cripps as they will soften in storage but will still taste good.

For something like Mutsu that is not triploid, both Hawaii and Suncrisp fit that bill. I am not sure Suncrisp will ripen in time for you, it is late October in upstate NY. It is super crisp and amazingly good at storage… I still have a bunch in my fridge. If it is too late I would get Hawaii which is just as tasty; Hawaii is not quite as crisp or as good a storage apple as Suncrisp but is still very good (Suncrisp is off the charts on both of those points). Both of these apples are a bit more tart than a Golden Delicious, but not as tart as Cripps.

I would check out the varieties developed in your fantastic ag stations in Harrow and Kent.

I too, tried to grow Cripps Pink where it wasn’t suited. As a newb, you really want to focus on an easy to grow reliable cropper for your area, even if it’s not too exciting. As a practical matter, almost any half-decent apple is going to be an “8” if well grown in a suitable location.

P.S. Not what you asked, and my experience a mere 3,000 miles away may not be indicative for you, but I am mightily impressed with the “Harvest Queen “ (Note the ‘har’) pear. Beautiful, productive, precocious (Rare quality in pears.) The only bad thing I’ll say is that it’s not a real vigorous grower for me. Get bigger rootstock than you normally would.

You may want to check out Cortland which was developed near you in NY State and has the characteristics you mentioned. It’s my mainstay tree and produces very reliably. A fantastic crisp & tart taste when eaten fresh and wonderful for baking. Mine store well into late March in my garage
Dennis
Kent, wa

University of Minnesota has released a bunch of tart/tangy, firm/crisp, disease-resistant apples with good cold hardiness as well. They’re most well-known for developing Honeycrisp. https://mnhardy.umn.edu/honeycrisp
(Menu at the top of the page under Apples has pages for the other new varieties.)

The PRI breeding program has produced a lot of good apples too, but their website is very 1997 Geocities. GoldRush (And like half the named, released co-op numbers don’t have their names listed, just the numbers.)

The scab resistance in most newer apples seems to mostly come from a crab apple ancestor, so you’re lucky you’d like some tartness in your apples. Trying to find a good pure sugary sweet one that isn’t highly susceptible to every disease under the sun is more challenging.

Fedco’s from Maine USA and specializes in cold hardy varieties and heirlooms, including many from Canada.

I second the NovaMac recommendation.

I got two last spring. One on b9 and another i grafted to m7.

It was the only tree in perdue univ list of disease resistent varieties that scored VR (very resistent) to scab, CAR, fire blight and powerdy mildew.

There is a post on Novamac with details on taste recently added. I will try to find that for you and link below.

I’ve been growing Novamac for about 20 years now. Purchased at a local nursery and the tag is long gone, so I’m not sure what rootstock it’s on, but I suspect M9 given tree size. I have an ongoing project where I’m trying as many seedling trees as I can find (as there are hundreds here in each town, extremely common) and I’ve had just about every cultivated variety I can get my hands on, and Novamac is hands down my favourite apple. VERY scab resistant. The biggest disease pressure here is app…

Thanks for all the recommendations everyone, I really appreciate it! @scottfsmith the ones you mention sound great, unfortunately they don’t seem to be sold by any of the online nurseries available to me. @kokopelli5A I have actually ordered harrow gold and dewdrop pear trees to plant this spring. Very excited for those! @DennisD I think I’ll pick up a cortland from the grocery store to see if I like it, its not one I usually gravitate towards, but I haven’t had it in a really long time. @evilpaul I’ll definitely check out that link and Goldrush is currently towards the top of my list. I’ve heard of someone that lives nearby who has it and it produces well for them. @scottmartin49 that’s a great resource, thanks! @TNHunter that link makes Novamac sound amazing, the only thing is that I really dislike macintosh apples, so I’m not sure its the best choice for me.
Currently the ones I’m considering the most are 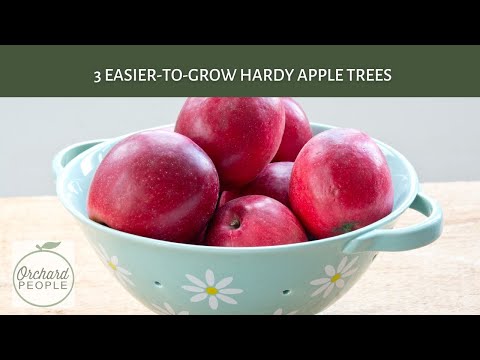 Checked YT for vids on novamac… and found the one above. They recommended top 3… with novamac as 1.

Liberty and Frostbite were 2 and 3.

He gives some history and flavor details on frostbite you might find helpful.

@scottfsmith the ones you mention sound great, unfortunately they don’t seem to be sold by any of the online nurseries available to me.

Did you go through the Canadian nurseries list in the Reference category here? I think Salt Spring sells several of the ones I mentioned for example. I don’t recall if they ship east but I think they might do it once a year.

In terms of the apples mentioned above, I don’t think GoldRush will consistently ripen in time. It is a bit late for NY state already. Zestar! is a really great one, it is something in the Cripps flavor spectrum as well. I grow Chestnut and it’s a great apple but is not like Cripps and is not crisp. I agree that Cortland is worth checking out again, it is an aromatic sweet/sour apple a bit in the Cripps category. It also does extremely well in your climate if properly grown.

@JennS
I am in zone 6a Central MA. Most years, Gold Rush has not fully ripened consistently for me. My friend, @galinas in zone 5b grew Gold Rush, and had difficulty ripening it, too.

I have Frostbite and like it. It is a small apple, though.

@JennS I’m the person that wrote the post about novamac that @TNHunter linked. If you have any novamac-related questions, let me know, I’m all in on these things.

For the record though, @SkillCult has a lot of great things to say about Chestnut Crab on his youtube channel, and I’ve heard a lot of others compliment it, so that may be worth considering as well, although I haven’t tried it.

I planted a GoldRush apple this year. I was so torn about will it ripen correctly here or not. I am in 6A growing zone. We can get really hot and humid summers but we can also get snow before mid November. So many great reviews about it. So I planted one anyway. Time will tell.

@scottfsmith That list of Canadian nurseries is so helpful! I need to make my way through them to see if I can find suncrisp. If I can’t find that I’ll probably end up with zestar or crimson crisp. @mamuang you have convinced me not to try Goldrush! @WildApple23 yes, I discovered skillcult’s videos and have watched a bunch of them! Do any of you have experience with tangowine or canadian strawberry? Those also sound interesting.