Only see a bunch of healthy baby pears after heavy blooming, might be the post late-frost effect? 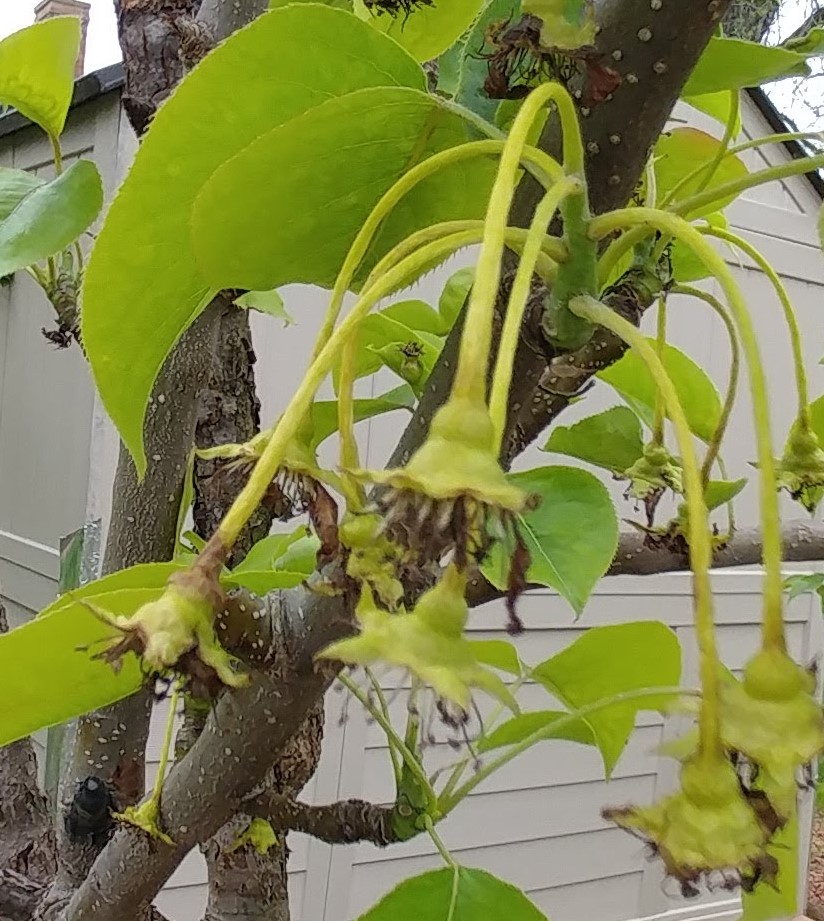 Did you have other pears blooming at the same time? Often, baby fruit that turn yellow and drop are due to lack of pollination.

Thanks for starting this thread I was going to start the same topic if you have not. Here starts my laundry list:

On May 9, my backyard had about 6 hours of 28/29 temperature at night, no cloud in the sky. At that time most of my trees were in full bloom except apricot which bloomed early and had past the petal fall. I checked my tree today， quiet upsetting situation.
Asian pears if by flowers count only less than 10% flowers turned into fruitlets ( if each cluster has10 flowers then one developed into fruitlets, this is how 10% was estimated ). Some clusters have no fruitlets at all. Go by each cultivars, drippin honey, korean giant/stark giant seems more bud hardy than the rest of pear cultivars I have. Most DH/KG clusters have 1 ~2 fruitlets per cluster which are about the same fruitlet numbers I normally keep after the thinning. One of Asian pear tree uses European pear as root stock and pollinator. European pears seems hardier than Asian pear . Every single european pear flower has developed into fruitlet. I am not fond of European pear . Maybe, I will have to develop some taste buds that appreciate the European pear this year. Come to think of , the higher number of European pear fruit setting is possible due to European pear blooms later than Asian pear (although they do overlap as well). The european pear’ s flower buds were in a development stage that were less susceptible to low temperature. Another thing I notice is that Chojuro had more frost damage occurrence on its lower branches. Yongi grafted branch has couple of fruitlets left every 2~3clusters. Next to Yongi is Daishiu Li branch, totally fruitless this year so is Paili. 20 Century (later bloomer) was
Grafted on lower branch but suffered less damage compare to Chojuro’ps clusters on the same height. Yoineshi seems bud hardy and have some fruitlets in most clusters. Hosui had some kind of blight on its main branch earlier, I cut it to one leaves bud/cluster so I skip Hosui frost damage report. BTW this is second consecutive year that I have blight issue on Hosui. Under my dormant copper spray schedule and copper around first green/ before bloom, rest of pear cultivars seem have less blight issue. It seems to me Hosui is more susceptible to the blight. Have you experienced similar blight issue with Hosui or it’s just in my yard?

I was worried most about frost damage of my sweet cherries but it turned out there is no significant sign of damage except those were grafted to Carmine jewel branches which bloomed a bit earlier than the rest of cherries.

J. Plum has not completely shuck fall yet. Some were first time bloom which I have no previous fruit setting rate to compare to. But Shiro seems not affected by the low temperature.and set a lot of fruitlets as usual.

Peaches have not past shuck fall yet and is a little early to tell. Reliance , July elberta, and Snow Queen all look like still having at least 50% of flowers attached to the tree , maybe they are still trying to develop into fruitlets? will see. Some of grafted cultivars suffered totally loss: India free (also is having moderate curly leaves disease), Red baron (severe curly leaves), Arctic series (some curly leaves), Oldmixon, Feicheng (severe curly leaves), Challenge, Raising star (mild curly leaves), and others(lost tags). One of my unknown seeding peach seems very bud hardy and curly leaves resistant. Will report later after its shuck fall to have a better assessment of its fruit settings

Apricot is a totally lost，grafted or not. But my apricot does not bloom and set fruits well in normal years either so I am not surprised. However, there is one branch grafted on snow queen sets higher percentage of fruitlets. Its tag was blown away by the wind, I can’t tell it is a apricot or aprium. I count it as a aprium.

Overall, certain cultivars of Asian pears will have normal amount of pear at harvest. but certain cultivars will have none. We didn’t have peach blooming in the area last year due to severe cold winter. it’s expected to have a lot of peaches this year (yes, a tons of flower this year. I have never seen so many flowers tightly line up on each branches blooming on my trees! It was joy just looking at the cloud of pink blossoms ) but the fruits quantities at harvest very likely is average amount , just less thinning to do. However the fruit varieties are limited to those bud hardy ones. Later frost virtually had no affect on cherries in my yard , good to the birds. Certain cultivars of J plum may have suffered some damage, but others show no sign of damage at all . European plums including gage, mirabella, seem hardier , show less or no damage.
There’re o a lot more facts may influence the fruit setting and combat low temperature such as location, branch heights, ago of the branches ,overall condition of the tree etc. I am limited to fruit tree growing experiences and just report what happened in my yard for those who want to compare.

Yes, I have a couple of Asian pears with overlapping blooming time. Quite surprised to see so few fruitlets

Thanks for detailed report. I have new century, 20th century and korean giant. All seemed has much less fruitlets this year. My experience with Hosui is in line with your observation. My hosui died from fire blight the first year, Starkbros sent me a replacement later and died again from fire blight.