Having more time in the wintertime allows me work on some projects inside. I have a few shovels I really like which got broken handles.

The three shovels at the left are ones I decided to weld steel handles. I’m generally adverse to adding any weight to a shovel, but we tend to break wooden handled shovels (especially if they sit out in the weather) w/ prying clay or rocks, that I think the stronger handles will be worth the disadvantage of the extra weight. I know more careful folks aren’t as hard on handles, but it’s so easy to get in a hurry and pry w/ what you’ve got in your hands, rather than get the right tool (i.e. a pick axe). My philosophy is to make things more bullet proof.

I still have plenty of lighter wooden handled shovels I decided to include in the pic. Plenty of shovels can be gotten for a few dollars at estate sales (which has been the biggest source of my shovels) but there are a few I really like, which I decided to weld steel handles to.

Like other folks, I sometimes do a lot of digging, and the right shovel is pretty important. 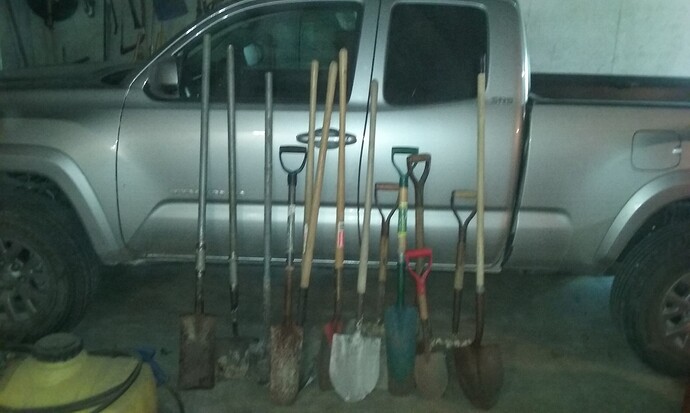 I only have about 45 trees I need to plant this spring, but we also have plenty more fence building to do, to dig deep holes, so I want some shovels which will hold up.

As an aside, my personal preference is for shovels which don’t have a lot of “lift”. In other words, I generally prefer a shovel which is almost straight like a “tile spade” so I can push the shovel down and pry the dirt loose (with a strong handle).

I have a couple of steel handled spades that I bought. I love them, I dont find them to be too much heavier and they will take a lot of hard work or maybe I should say “abuse”!

As the saying goes sometimes you get what you pay for and with tools that is generally the case.

My dad has a set of post hole diggers that have had steel handles put in them and I think the extra weight makes them work better when you slam them back down into the hole.

I broke a wood handled shovel, and got a replacement with a steel handle last year. It was really expensive, but I decided to go for a King of Spades shovel from AM Leonard. Man, it is a great shovel. I just didn’t realize what I was missing out on. The handle is probably thinner gauge than the iron pipe some of you guys are likely using to weld on to tools, but it seems extremely sturdy and not too heavy.

I am going to walk through the woods soon and collect saplings that the deer girdled last fall. Dogwood and musclewood are great for handles and frequently victims of rubbing. I like to peel them down thinner than normal so they are a little bit springy. I use my grub hoe for digging mostly and love the custom musclewood handle, it dampens shocks and is longer than anything you could buy in the store.

The farmer I work for replaces his broken wood handles with steel and then throws them in the pile of shovels with cracked heads soon after that!

Its nice to see I’m not the only one who goes thru shovels! I admit I often break them by trying to use them inappropriately (ie to pry with, etc) and I also leave them outside more than I should. But I’m so tired of breaking them. I had already decided my next shovel is going to be the best one I can buy, so I’ll try steel. I tried a fairly expensive fiberglass last year and that was the weakest of any- lasted a short time one. BTW, @hollygates, its nice to know I’m not the only one who has retrofitted/substituted iron pipes for handles on some old loppers and things! ha. (Don’t worry, I have some good ones too)

An irrigation shovel like the pony is hard to beat for most uses and they can be found with fiberglass or plastic handle with the same materials used in sledgehammers.

The handle is probably thinner gauge than the iron pipe some of you guys are likely using to weld on to tools, but it seems extremely sturdy and not too heavy.

I ended up using some thinner gauge tube I had on hand. It’s pretty light stuff. I was concerned it would bend at the weld point, so (I don’t know if it’s very clear in the pic) I put an extra sleeve on the outside near the head (where the handle takes the most stress) to add some strength.

On one shovel (third from the end) I reinforced the handle (near the head) on the inside (with a piece of solid rod). It makes for a smooth handle on the outside, but unfortunately made for the heaviest handle.

I’ve gone through a lot of shovels, but the weak point always seems to be the handle. Only once has a head broken.

all-steel/metal implements are the only way to go. From trowels to rakes, to kitchen knives, even to car engines…
toyota camry timing chains will last 300k mileage without having to be replaced. Chrysler sebrings’ timing belts will last ~100k at its max.

I use the long handle version and really like it. I usually stand on the shovel when digging, and it has a nice shelf to stand on. It also has an oval type cross section so it is stiffer in the direction that matters.

An irrigation shovel like the pony is hard to beat for most uses and they can be found with fiberglass or plastic handle with the same materials used in sledgehammers.

As far as I can tell my log splitting axe with a fiberglass handle is indestructible (except for fire).

Your garage is too clean![quote=“jujubemulberry, post:10, topic:4205”]
toyota camry timing chains will last 300k mileage without having to be replaced. Chrysler sebrings’ timing belts will last ~100k at its max
[/quote]Probably why Chrysler is so low rated for reliability etc. May also explain why Fiat bought them. they’re quality equals.

I used a fiberglass handle in my splitting maul for 7 or 8 years. It finally cracked in half just below the head. So two years ago I put a new handle in. A couple of nights ago I had a really tough block of wood that I was trying to split. It was forked and I was trying to split it through the knot. I couldn’t quite get it with just the maul so I got a wedge. About the sixth swing I glanced off the head of the wedge a knocked a big chunk out of the handle. All things considered they are a vast improvement over wood handles. I have noticed as I’ve gotten a little older that the fiberglass handle seems to transit a little more of the vibration to my hands when striking a very hard stick of wood.

stabbed it with my steely knives, but i just can’t peel the beast…

here are two of our solid-steel stabbers at their best. Worry-free for having no creases, crevices, and joints accumulating dirt or ending up with loose rivets, as the gigantic tropical fig is so tenacious and sappy! 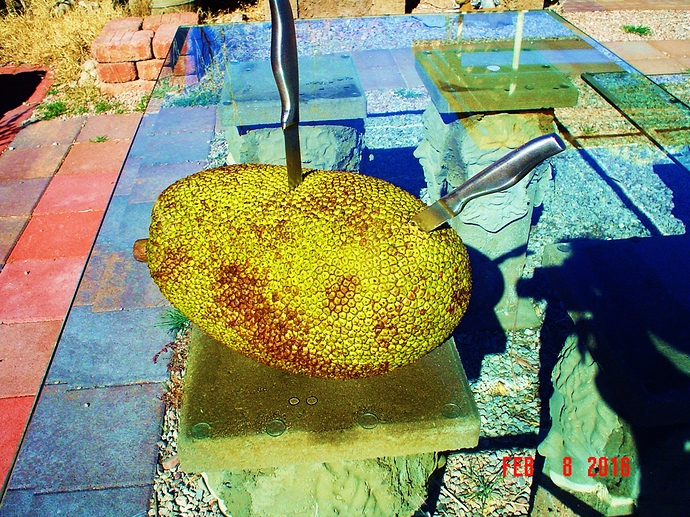 [quote=“Chikn, post:13, topic:4205”]
Probably why Chrysler is so low rated for reliability etc. May also explain why Fiat bought them. they’re quality equals.
[/quote] am a bit stumped as to why american cars are losing out and now considered a bit inferior to asian imports. We have the tech to manufacture 747’s and other jumbo jets into reliable and long-lasting workhorses-- yet we can’t do the same for relatively tech-basic automobiles?! Something amiss right there, and quite stumped as for the reason why…

quite stumped as for the reason why…

Short sighted greed. Why do it right when you can do it over and charge people twice. We had a 1999 Camry that my son used for a college car. It never broke down, Toyota must of lost a fortune on those cars, couldn’t sell parts or service. Still see many on the roads. And I’m not a big Toyota fan.

that is sad. Some ford trucks last just as long as toyotas, i hope that segment of pure americana doesn’t follow in the rest’s despicable business model

We can still do things right, just need a will and good leadership.

Some ford trucks last just as long as toyotas, i hope that segment of pure americana doesn’t follow in the rest’s despicable business model

I buy Ford vans and my last one lasted 14 years, my current one is 10 years old. Nothing major ever broke. I broke some major things, or my daughter! I would buy another Ford. Ford made record profit last quarter, they are not doing that bad. GM did well too. Chrysler is an Italian company as far as I’m concerned. As far as greed, Chrysler is not a profitable company and there is no money to be had. Seems to me stupidity was more involved in buying that company. The government should have let the market take it. Dead company walking

We had a 1999 Camry that my son used for a college car. It never broke down, Toyota must of lost a fortune on those cars, couldn’t sell parts or service. Still see many on the roads. And I’m not a big Toyota fan.

I drove a 94 Camry for 18 yrs. Every reliable car. Wish I still had it but gave it to my daughter who promptly sold it for something “better”. The Prius has to be one of the most complicated cars on the road and about the most reliable.