I got a small seedling of Psidium longipetiolatum (labeled as “mountain cherry guava”) as a bonus/freebie with my plant order from a local nursery in Seattle. They said this was their first time growing this species so they aren’t sure of cold hardiness, or anything else about it really.

I found it mentioned a couple times in passing on this forum by @Luisport (e.g., this post), but not much about it beyond that.

Does anyone know if this will be able to handle zone 8b? Will it be self-fertile, or should I try to get a second one? Does it have any special soil or sunlight needs? I’ll be keeping it indoors under lights for this winter, but hopefully it can go into the ground in the spring? 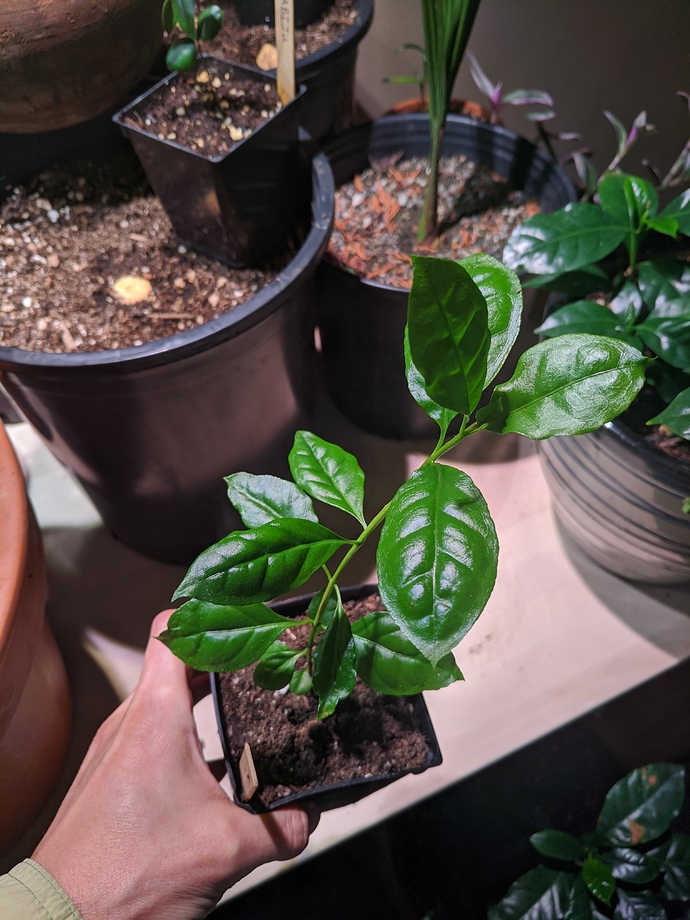 Thanks in advance for any wisdom anyone has to share!

Hi! You have plenty of photos of my tree and fruits here:

It is really hardy! She got -6.5C in 2016 with no problem!
But your seedling leaves are very diferent from mine, and i’m shure mine are true. They have heart shaped leaves…

Interesting! I wonder if they mixed up their seedlings and this is some other Psidium species. Thanks!

Yes they mixed it for shure…

This is my tree and leaves 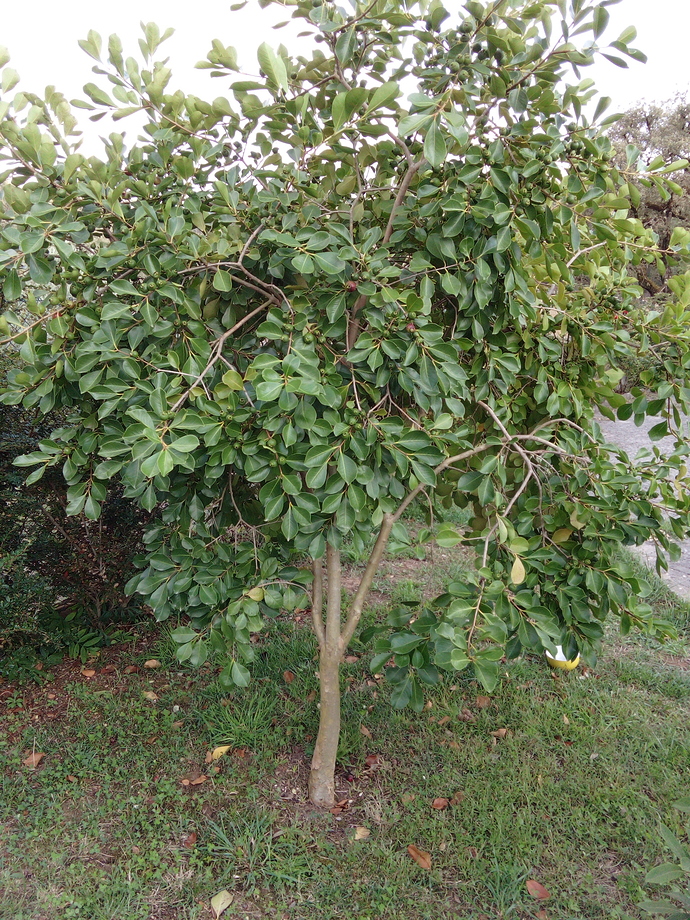 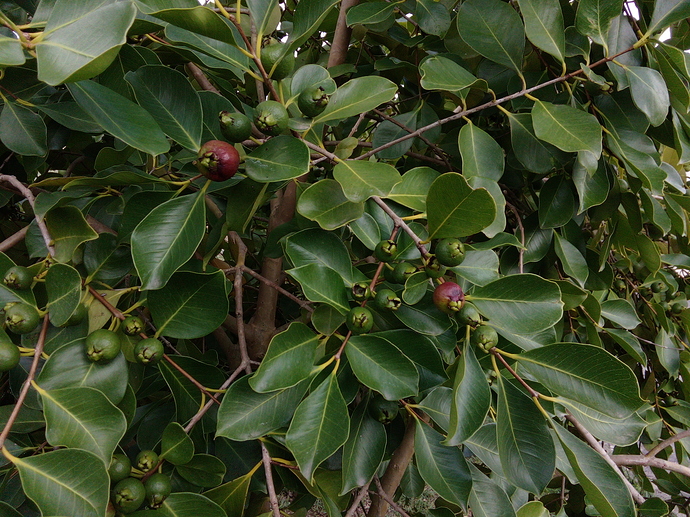 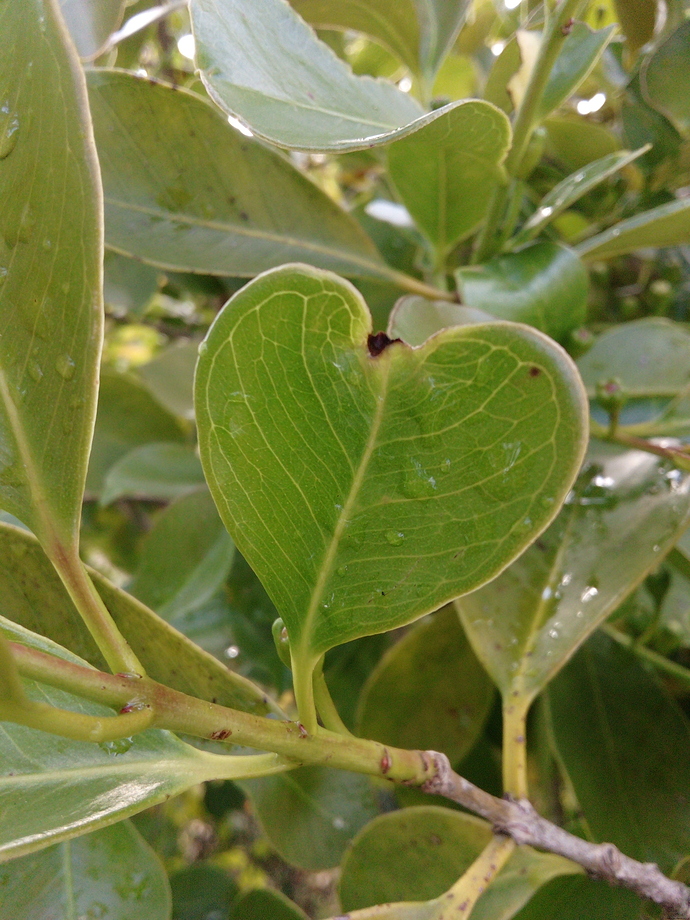 Is it possible the seedlings have different leaf shapes, and the heart ones don’t show up until the trees get larger? I have scoured the internet for photos of seedlings of this species and so far this reply on another forum is the only one I can find, which looks a lot like mine (and the parent tree, up-thread, has the heart shaped leaves). I’ll hold out hope and update this thread in the next year or two to see if the leaves start looking more like yours.

Thanks again for helping out!

Didn’t take a year! The latest leaves are looking a lot more heart-shaped than before, even though not yet as much as yours. I’m optimistic this will mature into the correct leaf shape soon 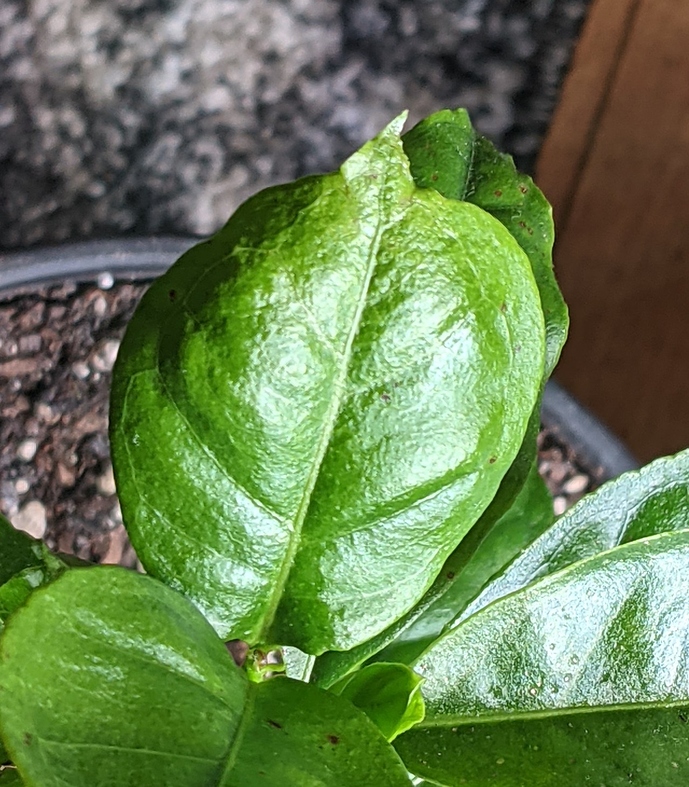 It’s a related species from the highlands nearby, the OP from the thread on TFF that I linked earlier has a good explanation of where it comes from and how it compares to P. cattleianum:

Is it possible the seedlings have different leaf shapes, and the heart ones don’t show up until the trees get larger? I have scoured the internet for photos of seedlings of this species and so far this reply on another forum is the only one I can find, which looks a lot like mine (and the parent tree, up-thread, has the heart shaped leaves). I’ll hold out hope and update this thread in the next year or two to see if the leaves start looking more like yours. Thanks again for helping out!

Yes it’s a variety of strawberry guava, but it’s a superior one. It’s big, stores very well and it’s not acid. The flavour is sweet and lemony… very very good!

a local nursery in Seattle.

Wanderlust, which I believe is mostly online ordering, but if you email them and ask then they have some larger specimens of many things not listed that are available for local delivery/pickup as well.

All the stuff I got seemed healthy except a 15g feijoa, which seemed to have either frost damage or fertilizer burns on some of the newest shoots, but it seems fine now (issue didn’t spread or worsen since it went in the ground). It was a bit rootbound, so that might explain it too? In any case I was overall very happy with them and plan to order again in the future.

Here’s their listing for this species, with quart-size seedlings for $20 or 5-packs of seeds for $12: Just a quick update on my seedling cold -hardiness test of this species. Kind of surprised this guy is looking so healthy after losing all its leaves in our cold snap last month: 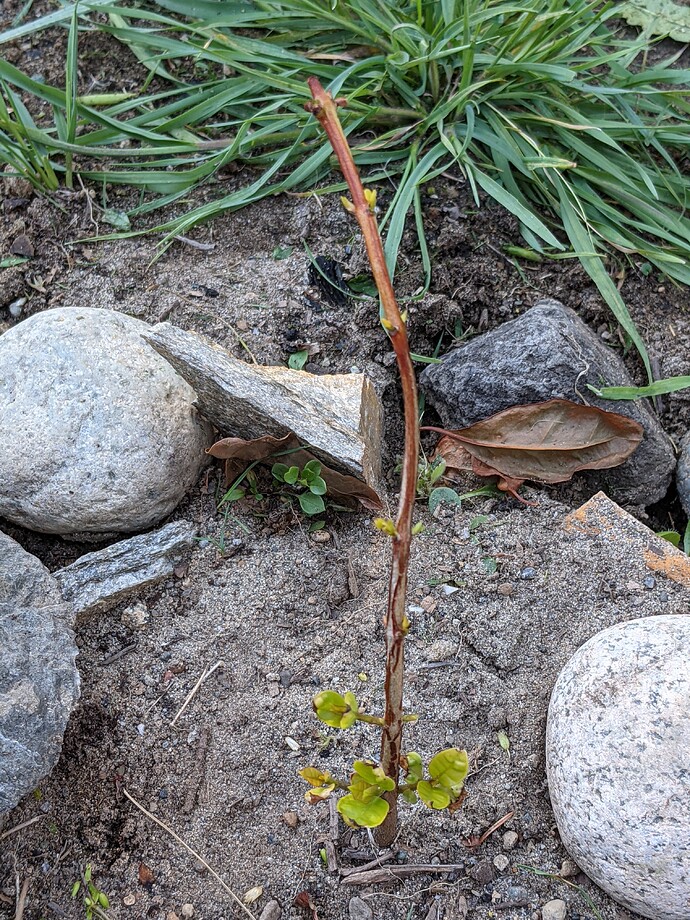 It was planted out in late February after spending 3 weeks on the patio in the shade without any major issues other than a little sunburn, but then it had multiple nights in the mid-upper 20s, including at least twice in a row with a high of about 34 in between. But it has new growth and tons of buds swelling, albeit in a pale shade of green, but looks like it’ll be okay!

I’m not so sure about the other one, which never lost all its leaves but also isn’t pushing new growth yet: 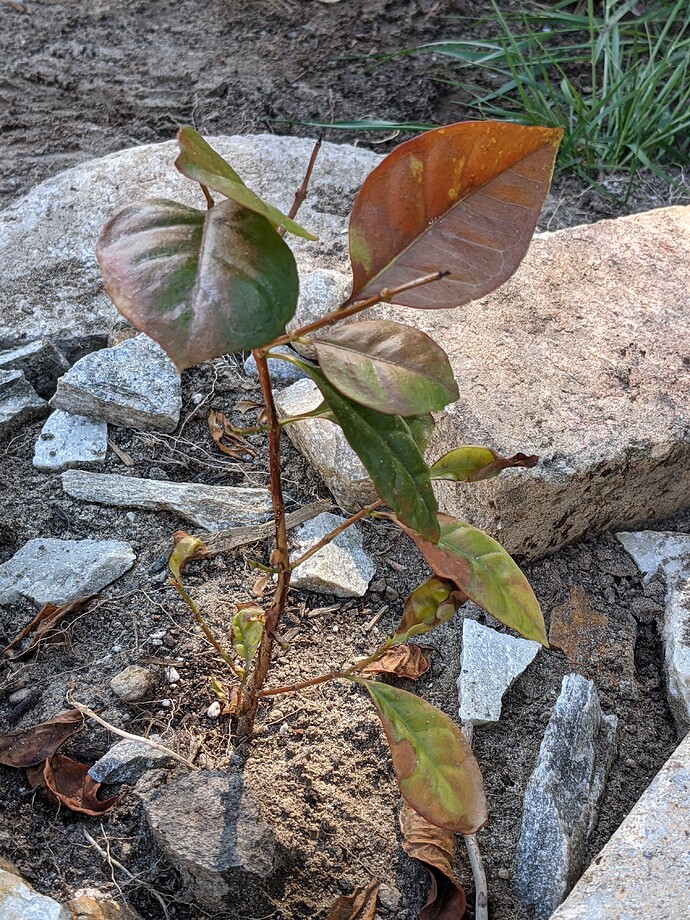 And last but not least, a rooted clone of the first plant above, in the greenhouse for now. Notice it’s got two bud sites and both have developed noticeably recently, so I think it’s going to make it: 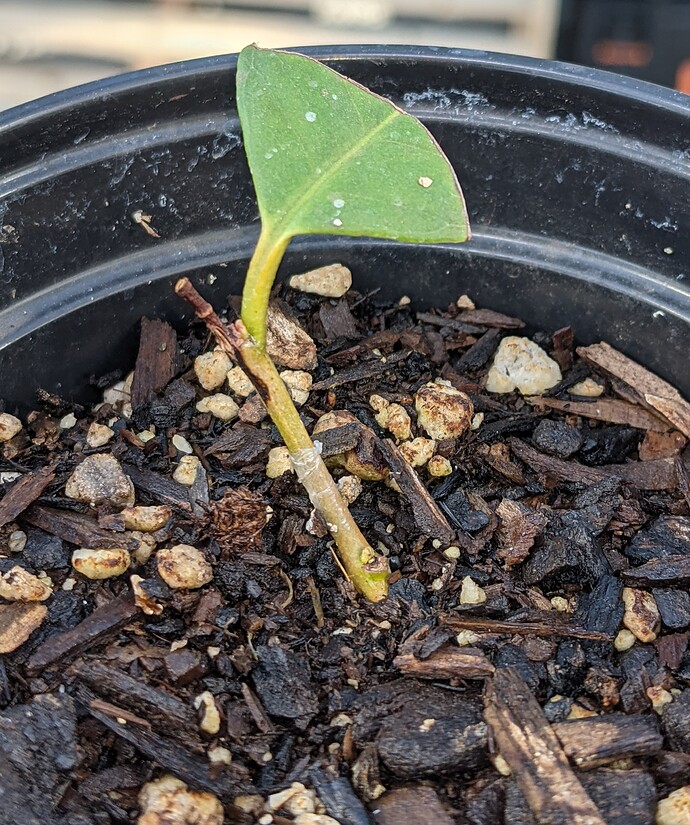 Updated photos of all three plants from the last post.They’ve really flourished, though aren’t a ton bigger. I’ll be keeping the clone in the greenhouse in case the others are killed in a bad winter: 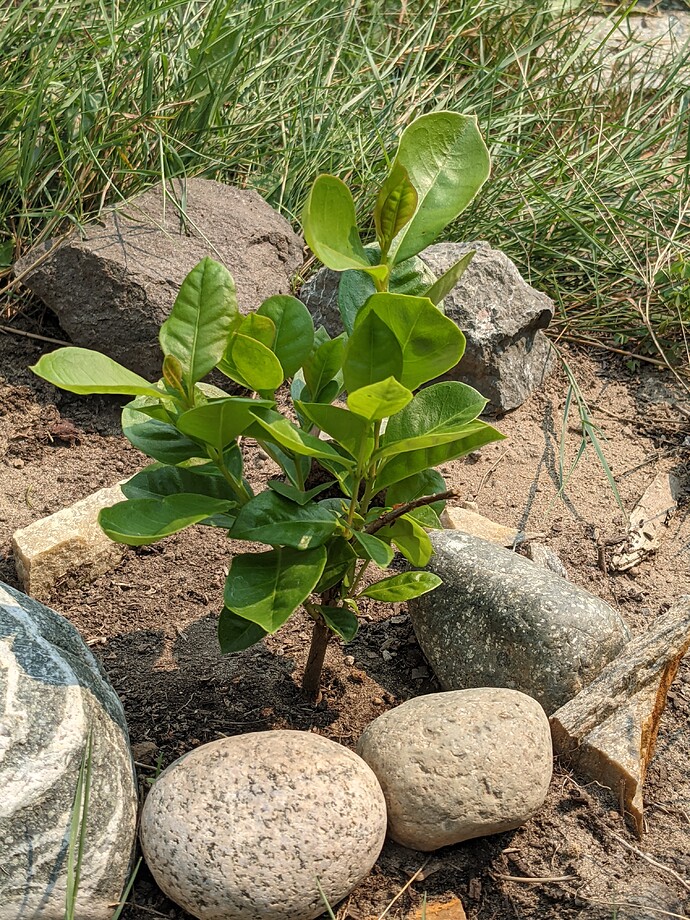 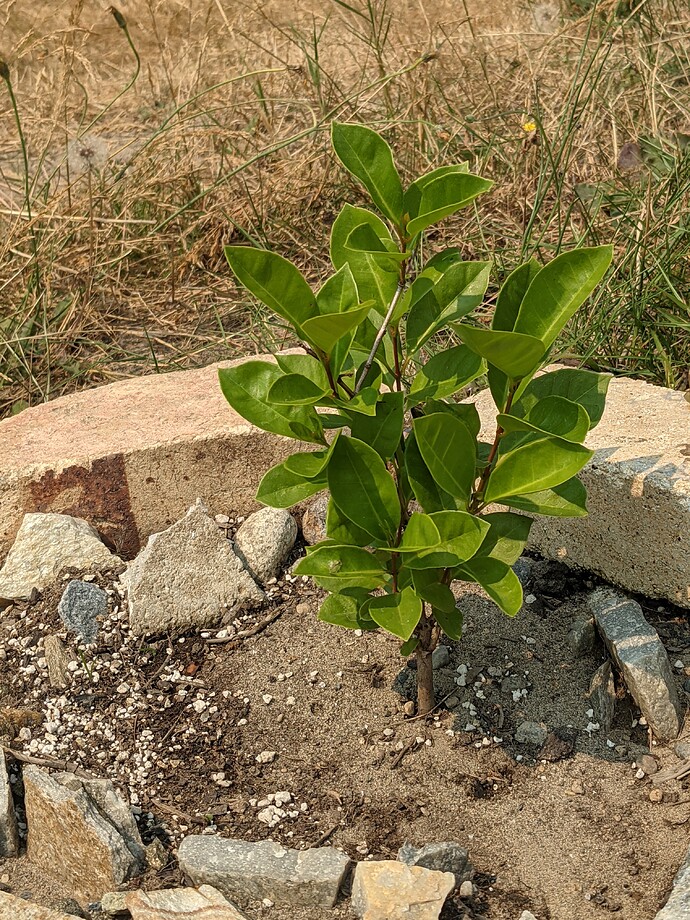 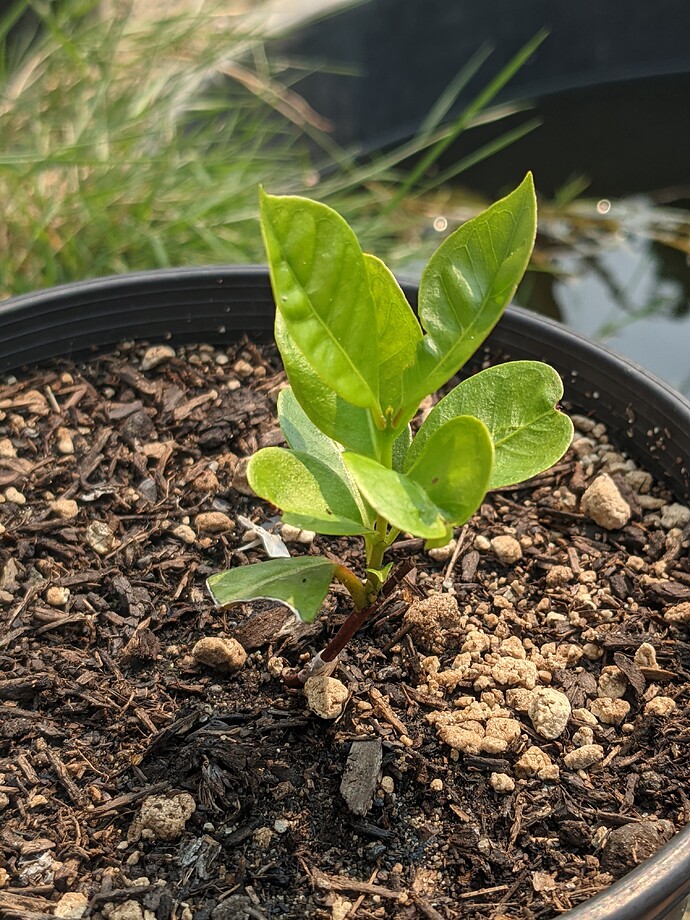 They look great! Congratulations!
I recognize the heart shape leaves like in my tree, so i think it’s a true p. longipetiolatum.

@swincher I have 2 psidium longipetiolatum that I got from Matt at Wanderlust in early 2021. Talking with Matt, and my own experience, it seems to put on more growth in the cooler months and slow a bit in the heat of the summer. I was going to greenhouse grow it up to a 5 gallon before I tried it outside but your experience has given me hope to try outside a bit younger. I also have Hexachlamys edulis Ubajay and Myrcianthes pungens Guabiyu that have behaved similarly. Matt said he got feedback from his Texas customers after the crazy cold they had and he had customers with all 3 of these survive the cold. I think that was much colder than we will likely see.

I was going to greenhouse grow it up to a 5 gallon before I tried it outside but your experience has given me hope to try outside a bit younger.

I’ve noticed the ones in the ground seem pale even after feeding with fish emulsion a few times this year, I wonder if they prefer a different pH? Here are mine now (I’ve cut off a few branches recently to be rooted so they were a bit bigger): 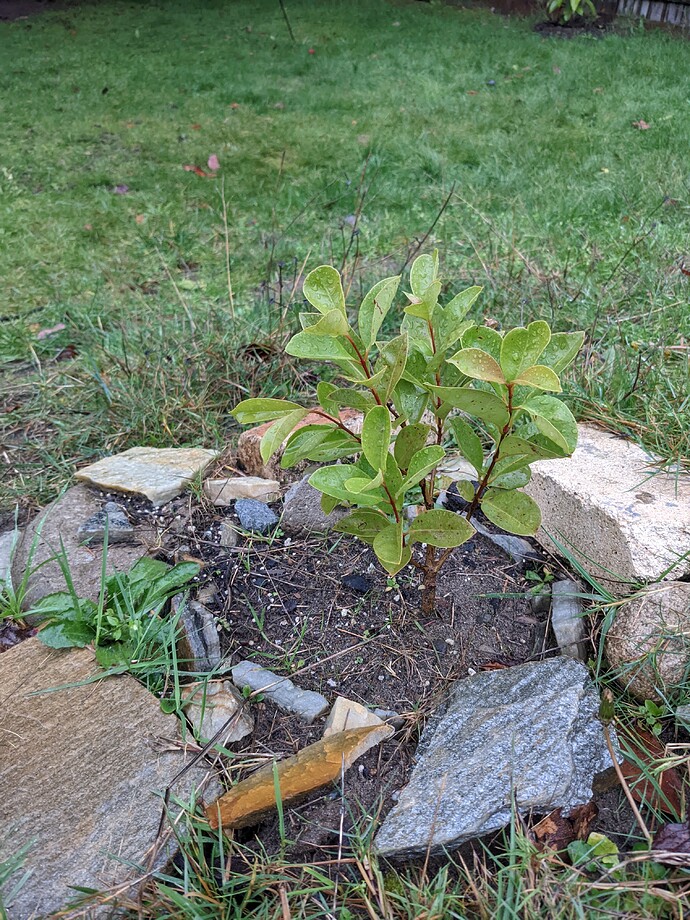 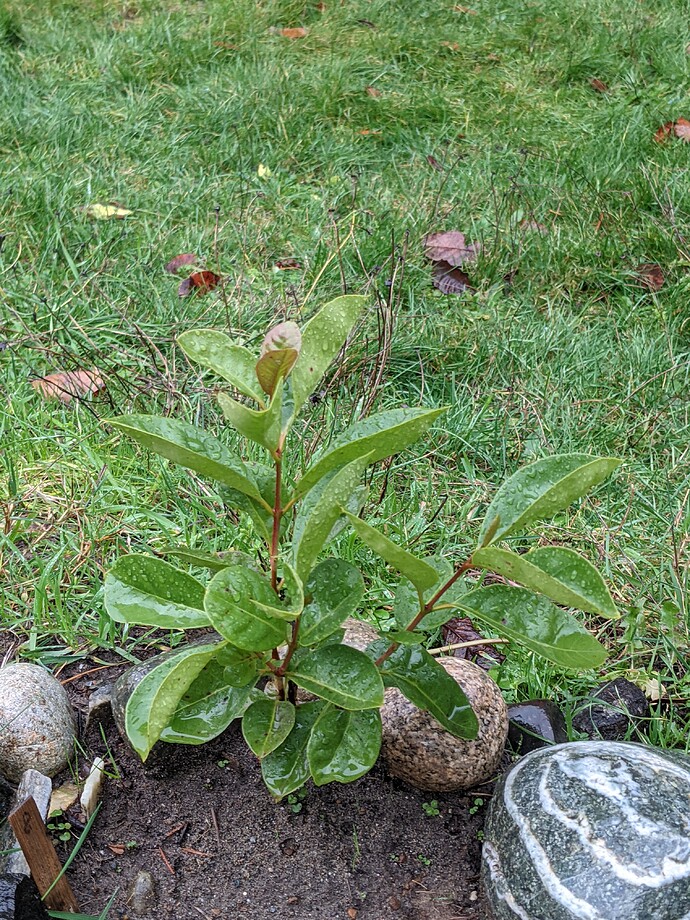 The clone from one of those that’s in a pot in the greenhouse has much better leaf color: 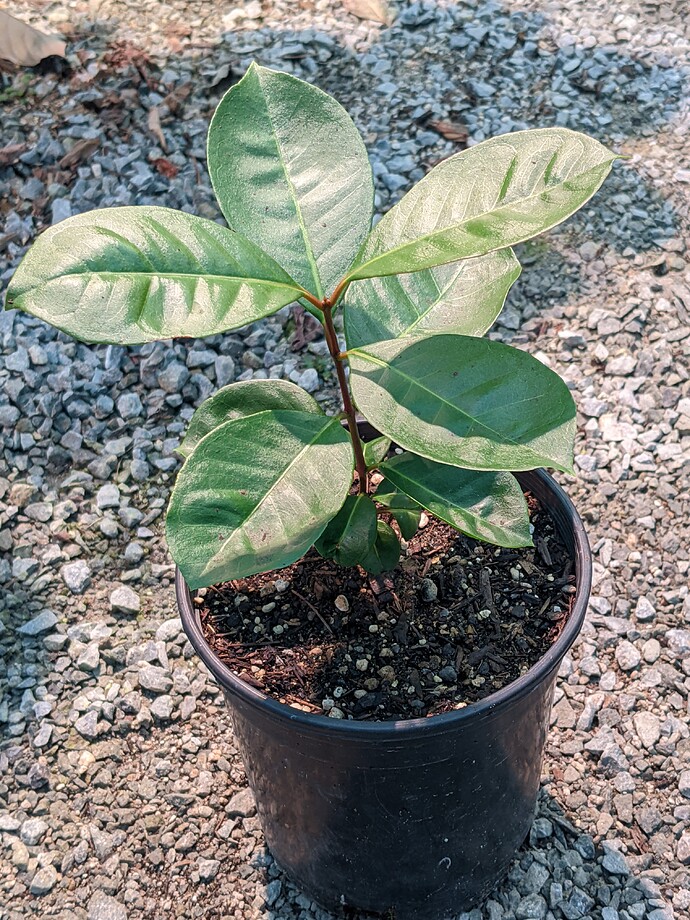 I bought both of those from Matt, too, and planted them out after the last frost this spring. They haven’t grown a ton but still look ok: 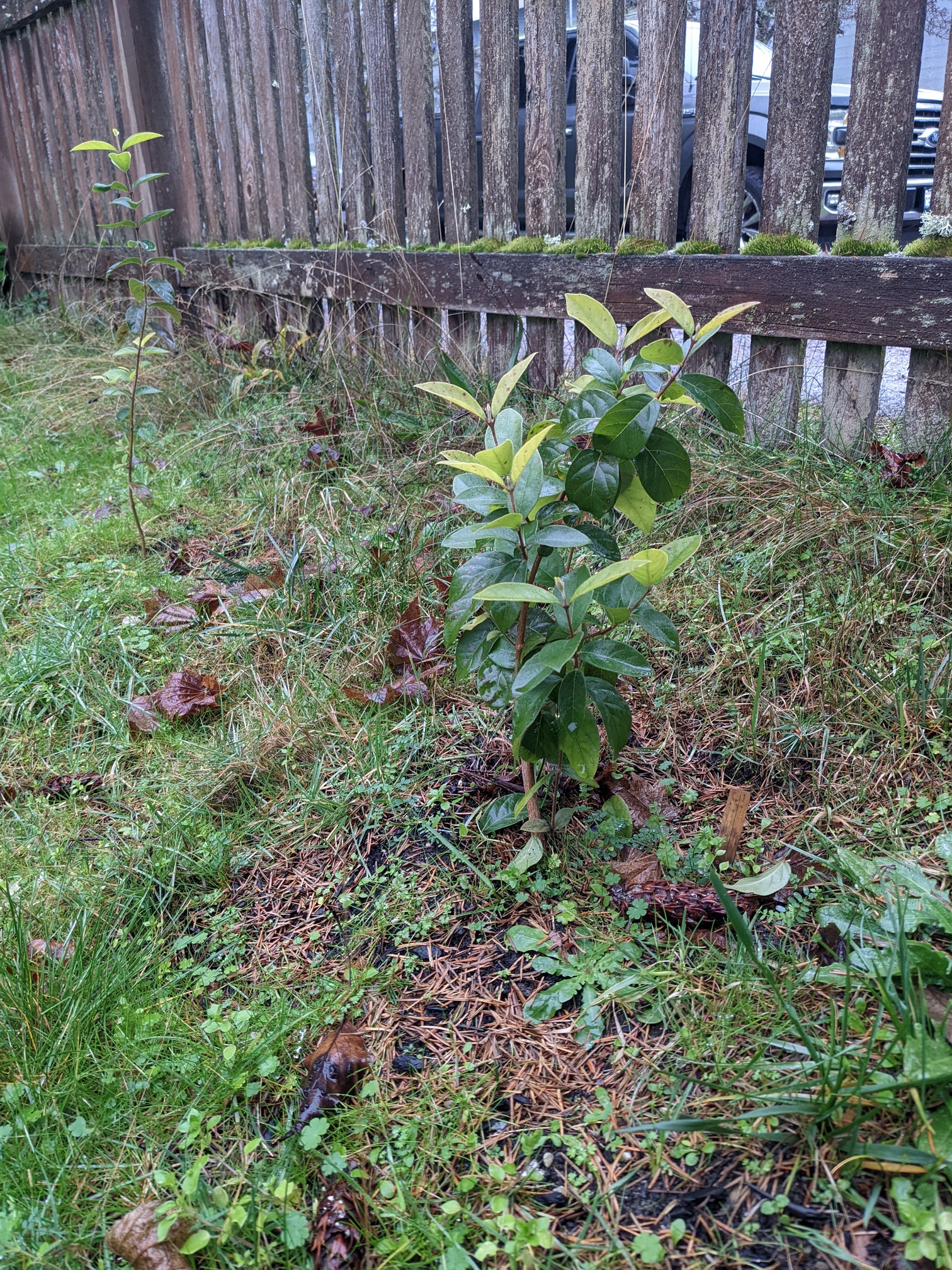 I may be wrong on this, but I think they grow in dominantly forest type conditions that are inherently fungal dominated. If I’m not mistaken, grass soils tend to be bacterial dominated. It may be a case of getting them in more of a community of woody plants so they can attract through their exudates more beneficial fungi. Through this interaction, the plants can somewhat control the PH as they desire by attracting the desired soil biology for their needs. I’m not an expert but I’ve noticed that the plants I grow in a community often grow better than my solo plantings. Having woody perennial plant roots in the soil year round is helpful. Might not be the issue but just a thought. Also, mine defoliated over the winter and recovered fine. Not sure that it would normally do that but didn’t seem to hurt it.

If I’m not mistaken, grass soils tend to be bacterial dominated. It may be a case of getting them in more of a community of woody plants so they can attract through their exudates more beneficial fungi

Could be! I’m doing my best to slowly destroy my lawn and replace it with food-bearing plants, but it’ll be awhile!

The large fir tree in our front yard has a nice needle bed under it, but most of the yard was grass when we bought the place last summer. Eventually I’m hoping all the trees I’m planting will start to shade out the grass so other ground covers can compete.

I totally get that. I bought my 5 acres in 2016 and I’m still a long ways from where I want it. When I started my first food forest at my last house my wife and I decided to plant dense because we only had 5000sq ft to play with. When we moved to acreage, I started planting sparse and noticed things took longer to establish. Most things recovered but my plantings took more babying. I started planting dense again and noticed things that were planted years later were as big as the early plantings. It wasn’t until I read Teaming With Microbes that it really made sense to me. I started using nitrogen fixing plants like goumi and Autumn olive, seaberry, and others that do a good job of establishing the soil when planting a new area and then I cut them back real hard every few years. This root prunes them and gives the nitrogen to the surrounding plants, in the meantime you get good fruit from them. Aronia and Honey berry also seem to establish quick. Not that they are nitrogen fixers but they seem to get happy quick and that helps the ecosystem. Sorry for the rant!