Putting a persimmon to bed

It’s been pretty mild here so far, with the low not getting below ~22F. But, Thursday night is forecast to be 6F, so that is the reminder I needed to winterize my persimmons.

My Tam Kam had pretty extreme die-back last year, so there was a lot of low growth this summer. I chose 4 of the most vigorous vertical shoots and cut off the rest.

Note the overgrown kiwis in the background… 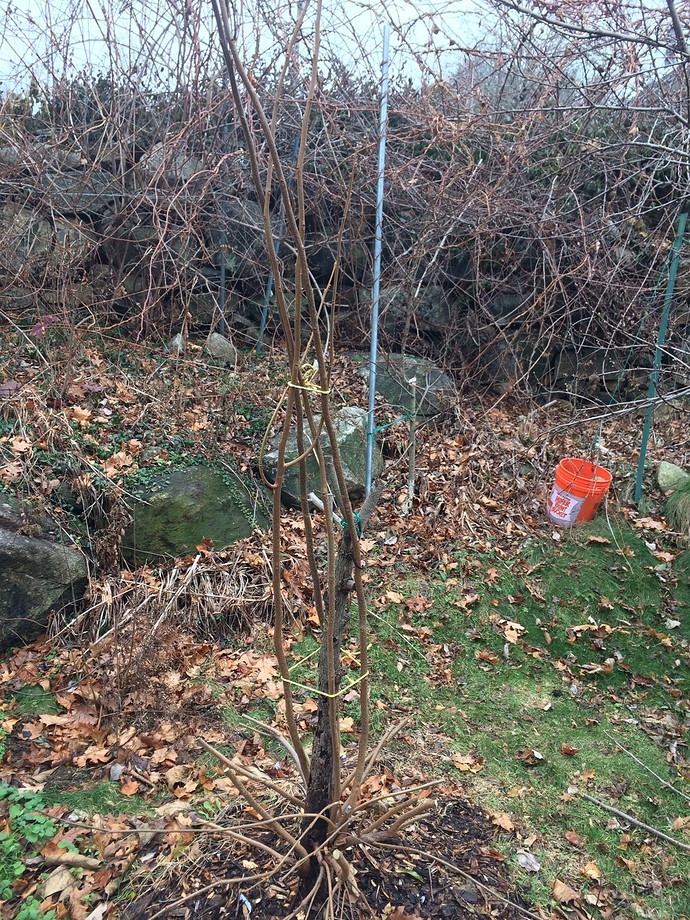 I’ve got lots of scionwood, if anyone wants to try Tam Kam… 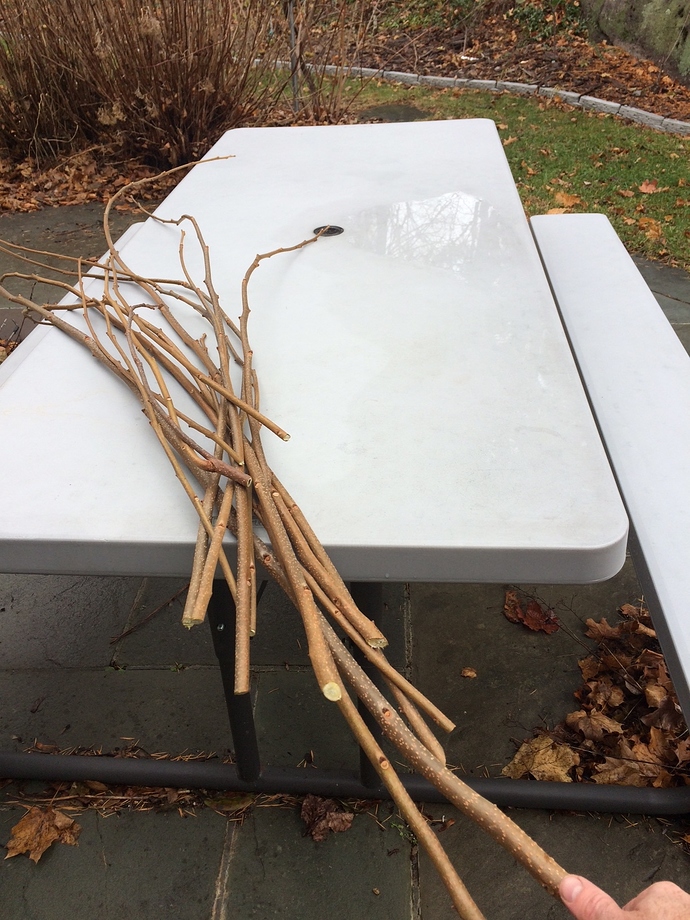 The after the four got tied together in the center, I proceeded to put a small post in the ground a couple feet away and wrap the whole thing in a tarp. 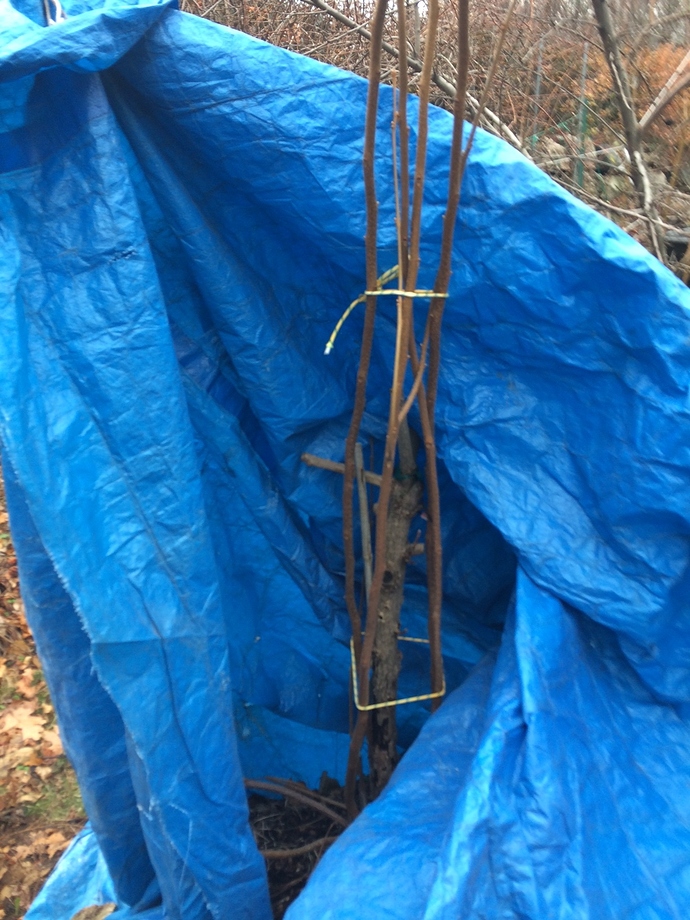 Filling it with leaves was a bit tricky, as it took a lot more leaves that I though. I could probably use a few more, but that (two packed barrels) is all I had on hand. 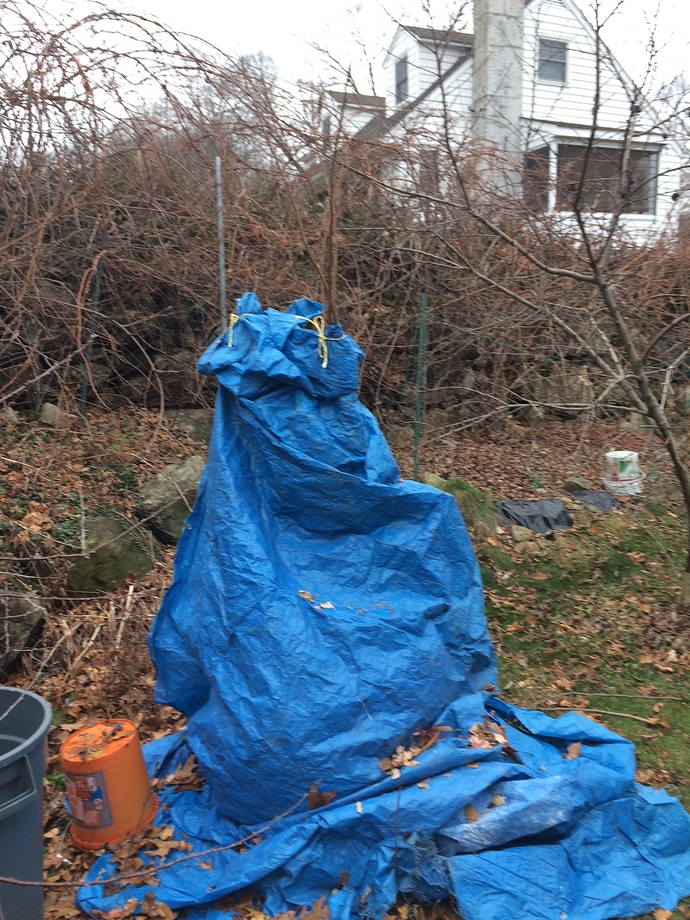 The tops are sticking out of the tarp, so I’ll be able to see how it would have fared without protection. I’ve never sampled the fruit, but I was almost there (flowers and young fruit which aborted), before it got nailed for two winters in a row. This past winter, a tarp alone didn’t save it- woodchips around the base protected about a foot. I think I remember @tonyOmahaz5 going the tarp and leaves approach a few years ago with success, so hopefully my (poor) adaption will work too.

@BobVance – this is a great heads-up to newer growers. Although we think of Diospyros kaki cultivars as being from the colder temperatures of Japan, the genetics most likely originated in the highlands (Himalayan foothills) of Pakistan and Iran. There were woodlands of them there around 4k to 7k elevation, but consider the latitude! The record low temperatures rarely dropped below freezing. They have adapted well through the ages – particularly in Japan – but I imagine your kind of temperatures are quite a challenge.

but I imagine your kind of temperatures are quite a challenge.

Yup- we had a few good years in the -3F to +1F range where they made it through without issue. Since then it has been -8F and -9F. I’m not protecting a few which made it through -11F for Cliff England:

I’m not sure that all of those are pure kaki though. I also hedged my bets by grafting a couple that I know are hybrids and should be fine.

Have you had trouble with the tarp touching the plants? With figs it isn’t a good idea to have tarps (or plastic) touch the wood, wasn’t sure if that also applied to persimmons.

Bob,
With Ampersand’s comment, you could put a 30 gal leave bag/paper bag (with the bottom cut off) over your tree and stuff it with leaves before you wrap it with tarp.

You tied the branches nicely so sliding a bag over the tree is very easy. I use two bag overlapping a bit as my Nikita’s Gift is taller than one bag.

I also wrapped my persimmon trees. I put a chicken wire fence around the tree to confine the leaves better. I also put some heat cable around and when temperature is under 0F, I will use this to keep the tree alive.

I will try to grow 4 japanese persimmons (And many other things) when we get a property. (Hopefully next year)

Temperature is never below 0F in Südburgenland … i think persimmons would be possible to grow there.

The PVNA Persimmons seem to be very interesting with the dark flesh. (I wouldnt mind the seeds)

I read that they have a spicy taste and ripen earlier than PCNA Persimmons.

Iam currently looking at these varieties of PVNA Persimmons:

The main problem is to buy them … they are really rare to get in europe!

Check out this post (and the accompanying PDF) from Tim Clymer: https://threefoldfarm.org/blog/asian-persimmons-for-zone-6b-and-7a

Similar temperatures to what you have, I think.

Thanks for the link!

Sadly no review of the varieties that iam interested in

A temperature of 0F is rare at our location.

Most, if not all japanese persimmons that are being sold in europe have D.Lotus as Rootstock.

Too bad that we dont have more varieties in Austria … the Czech Republic is the only way to get rare ones!

Check out this post (and the accompanying PDF) from Tim Clymer: https://threefoldfarm.org/blog/asian-persimmons-for-zone-6b-and-7a

Nice article. I was a bit disappointed to find that I’m already growing what they have as the two most hardy non-astringent persimmons: 1- Tam Kam and 2- Gwangyang. I still have some hope for Chinubli, which survived it’s first winter for me (unprotected, with only die-back at the tip after -10F).

Have you had trouble with the tarp touching the plants? With figs it isn’t a good idea to have tarps (or plastic) touch the wood, wasn’t sure if that also applied to persimmons.

With Ampersand’s comment, you could put a 30 gal leave bag/paper bag (with the bottom cut off) over your tree and stuff it with leaves before you wrap it with tarp.

Good idea. Maybe I’ll use one on top of the tree to protect it all the way up. The lower parts are in the middle, only touching leaves, so I think they will be OK.

I’ll also use one of the bags on the much smaller Gwangyang. It’s a good thing I haven’t gotten around to recycling the bags yet- I picked up a carload of them to use their leaves for insulation.

I’ve got some time I think, since we only got down to +10F or a bit more and things should warm up for at least the next week.

In China the maximum cold tolerance they see in persimmons is generally in the -5 to-10 range and they view that as the limit for the species since they have been trying to breed the hardiest versions for probably hundreds of years. Most if not all of these are astringent varieties.The thing I can’t identify is which is the most cold hardy non astringent Chinese variety. Attached is a photo of a 150-200 year old persimmon tree in a 200 year old chestnut orchard outside of Xian, China. This is on the border of zones 7 and 8. 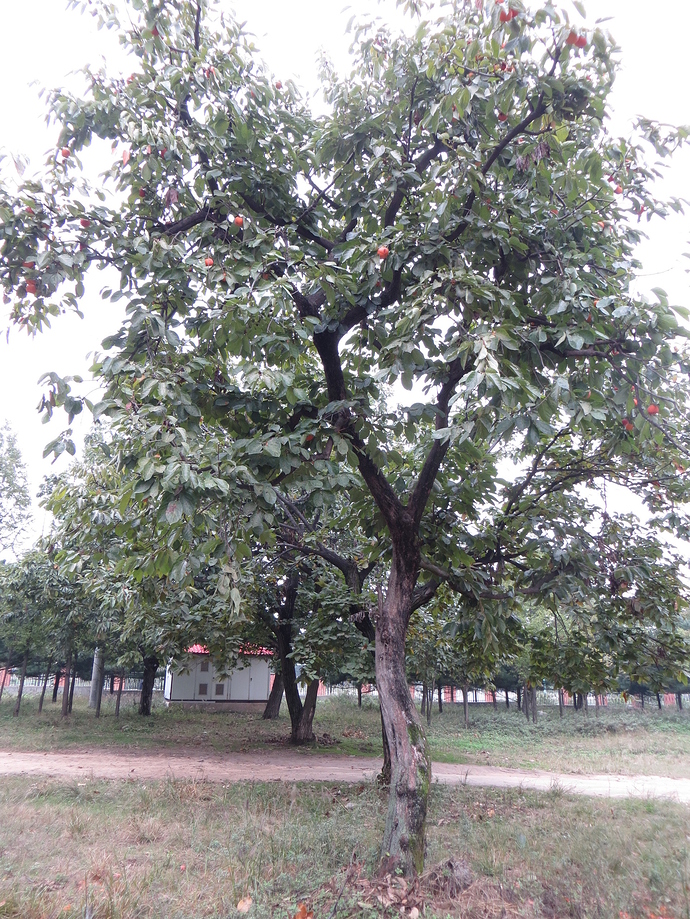